Today Epic Monsters offers you a prehistoric terror known as the overwhelmer of boats: the kongamato! 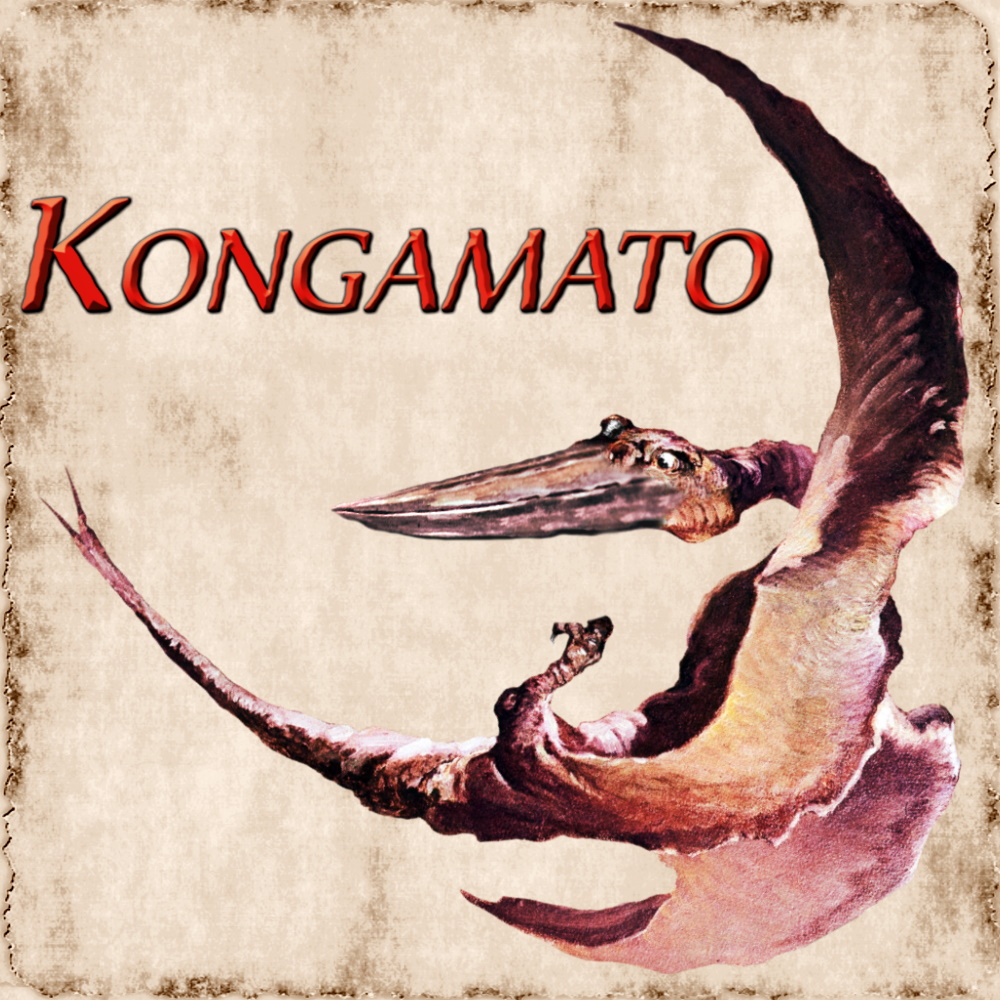 First described and named by Frank Welland In Witchbound Africa (1932) as a large beaked, reddish creature with leathery wings, much of the writing about the kongamato points to locals identifying illustrations of a pterodactyl as the same creature. He also notes that “[locals] do not consider it to be an unnatural thing like a mulombe (demon) only a very awful thing, like a man-eating lion or a rogue elephant, but infinitely worse”. However the kongamato is a proper cryptid if there ever was one, there are many stories about it, and in truth it resembles a variety of airborne mythical creatures (including Papua New Guinea’s ropen).

The kongamato is generally thought to be in Angola, the Congo, and Zambia, but there are more specific historical references to Jiundu Swamp (northwestern Zambia) and Lake Bangweulu (also Zambia). Wherever it may be, people near its territory are said to carry charms called muchi wa Kongamato to protect them from it at certain river crossings. Rightly so—this monster capsizes canoes and attacks people on the shore, and though it mostly eats fish humans are still on the menu, and grisly enough it’s thought to dig up graves to steal and consume fresh corpses. A few of the stand out references to creatures that might be the kongamato are:

Design Notes: Let’s start with a basic understanding—this is an interesting enough entry to merit a write-up even if there’s already a monster well-suited for it (the pteranodon), so we’re going to take that monster and set it up with some interesting traits to make for a fun encounter while we oomph its statistics. That’s done easily enough with some Keen Sight (spotting prey by the river’s shore), Flyby, and some grappling talons. After that we’re deconstructing pounce into Swoop, and because this is a beast (which means druids can transform into it) and we’re not done amping up the stat block, let’s tax that a bit with a bonus action to finish activation. Soar is a little bit redundant and I almost cut it, but it’s serving another purpose here: it’s illustrating what you do with this creature, and it’s doing it inside of the mechanical language so the tactics will be retained when reproduced. Let’s keep it there and get to doing the numbers! The DMG’s chart comes in a smidge under 3 and ye olde Blog of Holding just a little bit higher, leaving this flying monster comfortably sitting at CR 3.

Flyby. The kongamato doesn’t provoke an opportunity attack when it flies out of an enemy’s reach.

Keen Sight. The kongamato has advantage on Wisdom (Perception) checks that rely on sight.

Swoop. If the kongamato flies at least 30 feet straight toward a creature and then hits it with a bite attack on the same turn, it can use a bonus action to try to bowl the creature over. The creature must succeed on a DC 14 Strength saving throw or be knocked prone.

Talons. Melee Weapon Attack: +6 to hit, reach 5 ft., one target. Hit: 8 (1d8+4) piercing damage, and the target is grappled (escape DC 14). The kongamato has two talons, each of which can grapple only one target while the kongamato is in the air.


REACTION
Soar. When the kongamato grapples a prone creature with its talons, it can use its reaction to fly up to half its flying speed.
Click to expand...

Mike Myler is a freelancing RPG goblin (or goblin that freelances for RPGs?), regent, the editor for the excellent EN5ider Patreon, and the Project Manager for Level Up: Advanced Fifth Edition. You can also find his marks in the N.O.W. book for the What's Old Is New RPG, on www.mikemyler.com⁠ (which has the neatest collection of free content around as well as links to his 6 hardcover campaign settings), and here on ENWorld in ENterplanetary DimENsions. What's next? The Oops! All Dragons | 45 dragons for D&D 5E and Level Up 5E Kickstarter ENDS this week! https://tinyurl.com/oops-all-dragons
R

Judging just from the creature's name, I was imagining a cross between a 50-foot-tall ape and a tomato.

Looks good!
Added it to the Blog Database.

Bupp said:
Looks good!
Added it to the Blog Database.

Probably because I was taking a break from message boards then.
And it belongs on the Monstrosity page, which is where it is now located.

Two more suggestions (lucky you) - 1) the Cirein-croin, a mighty sea monster that I can't find a physical description for, but is said to feast on seven whales (I thought that meant seven heads but maybe it refers to its comfortable level of repletion...?), and 2) Allan Quatermain, H. Rider Haggards' oft-portrayed adventurer! You could probably turn your eye to Umslopogaas & Ayesha as well, to be honest...

Dark Arcarnist said:
Two more suggestions (lucky you) - 1) the Cirein-croin, a mighty sea monster that I can't find a physical description for, but is said to feast on seven whales (I thought that meant seven heads but maybe it refers to its comfortable level of repletion...?), and 2) Allan Quatermain, H. Rider Haggards' oft-portrayed adventurer! You could probably turn your eye to Umslopogaas & Ayesha as well, to be honest...
Click to expand...

Added the Cirein-croin to the queue, but: D&D 5E - Mythological Figures: Allan Quatermain