“It’s a bird! It’s a plane!” No, it’s that half-bird half-boy shadow-fighting faerie-friend from Neverland, that lad who can never grow up but apparently can do anything else: Peter Pan! 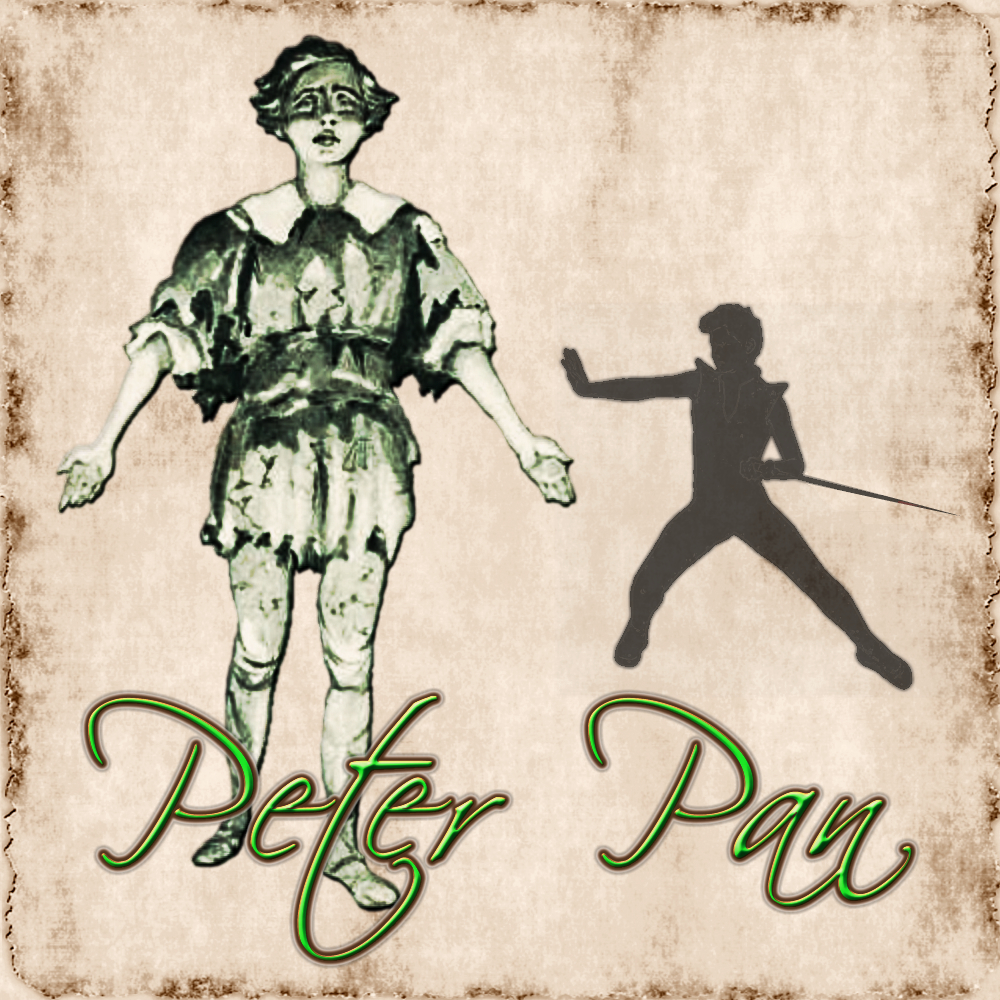 This is a literature character invented by the Scotsman J.M. Barrie, a novelist and playwright in the early 1900s. There’s an extremely popular animated Disney film, Peter Pan, as well as a great movie starring the late Robin Williams called Hook, that have introduced him to most modern audiences. He’s a chaotic youth that never grows up and whisks children away to the wondrous island of Neverland where they too never become old, joining his gang the Lost Boys. Captain Hook and his pirates are always trying to capture Peter and his friends, until the buccaneer is gruesomely killed by a crocodile. At the end Peter remains in Neverland while the Lost Boys return to England with his most recent batch of abductees, adopting the kids into their family and growing old--too old to fly and ever return.

Design Notes: My initial impulse here was to make Peter Pan as a Mythological Figure using the feywalker class (as so many folks like to call that the Peter Pan class!) but upon thorough consideration it became clear that actually isn’t a very good fit. Why? Let’s review what this little dude can do: he’s eternally young and has to forget things to retain that youth, he can fly under his own power, he apparently affects the entire region of Neverland while present, he’s a swordsman on par with a pirate captain (who admittedly might not be that good, what with the amputated hand), has superior senses, can imagine things into existence, has a danger sense, and is a psychopomp.

What? Yes. There are three other original works beyond the narrative most of us know (Peter Pan in Kensington Gardens, When Wendy Grew Up - An Afterthought, and Peter and Wendy) and apparently he takes to shepherding the souls of dead children so they’re not frightened on their way to the afterlife.

With all that in mind—let’s do the numbers. The Danger Sense trait gives Peter here an effectively higher AC (and if you want to be nuanced an abstractly ~7-8% higher hit point total) so if you boil him down into the DMG rubric it spits out a 7.5, the Blog of Holding ever so slightly higher at 7.83333. With those nifty lair actions (which includes a minion option and shadow puppetry!

Note: Over on Twitter designer Shea Reinke had some passionate thoughts on Peter Pan and pointed out there’s some good reasons for him to be considered evil: “forget the brown hannah barbara hero, and understand.. ‘sneaking into children's bedrooms’ stealing ‘lost boys’ .. chopping off people's hands.. the racism.. then read the bio of the author.. yeah and in the book he kills Tink and doesn't care, EVIL!!...I feel I should qualify for nerd pickyness. The Author kills Tink to highlight how evil Peter is. In the last chapter Wendy visits Neverland one last time and asks where Tink is, and Peter responds ‘Tink who?’ then the book ends.” Considering the (much wider) public perception of the sanitized version I’m sticking to chaotic neutral, but definitely with a skeptical eye at this little fellow’s brand of ‘mischief’.

Ageless Amnesia. Peter does not age. He cannot suffer from frailty of old age, die from old age, or be aged magically. He also suffers from partial amnesia. Peter knows who he is, retains racial traits and class features, and recognizes people he knows, but he doesn’t remember any past events that occurred more than 1d4+1 months ago. If Peter is cured of his amnesia, he loses this trait.

Ethereal Sight. Peter can see 60 feet into the Ethereal Plane when he is on the Material Plane, and vice versa.

Fairy Dust. Peter can use an action to blow fairy dust into the air to produce a variety of effects.
Feat: Mobility. Peter can Dash through difficult terrain without requiring additional movement. Whenever he makes an attack against a creature, he doesn’t provoke opportunity attacks from that creature until the end of his turn.

Keen Senses. Peter has advantage on Wisdom (Perception) checks that rely on hearing or vision.

Mimicry. Peter can mimic animal sounds and humanoid voices. A creature that hears the sounds can tell they are imitations with a successful DC 17 Wisdom (Insight) check.


REACTIONS
Feat: Master of the Sword. Peter can use his reaction when wielding a sword to gain a +1 bonus to his AC until the start of his next turn or until he is disarmed. In addition, Peter has advantage on opportunity attacks.


LAIR ACTIONS
Peter has a visceral effect on Neverland and the island seems to awaken when he is there. On initiative count 20 (losing initiative ties), he takes a lair action to cause one of the following effects; Peter can’t use the same effect two rounds in a row:

Children who do not age are vampires.
W

Well this makes for a nice Fey boss.

Now he is a public domain character, isn't he?

That's an awesome write up, I was afraid he'd be the four-color version, but this has fey nastiness dripping from every pore. Well done sir.
W

Not sure if anyone was a fan of the show but Peter Pan was one of the main villains for one of the seasons of "Once Upon A Time" and boy was he as evil as evil comes. Definitely not modeled after the Disney sanitized version of him. I like it and prefer him evil. Tired of Hollywood sanitizing things.

This is a great write up - I have enjoyed others but this one will definitely get a run - the players will trust him instinctively leads to such a great villain.

LuisCarlos17f said:
Now he is a public domain character, isn't he?
Click to expand...

I wrote up a Ravenloft domain for Peter Pan that I liked a lot but never got a chance to run. (Tink was the Darklord.)

Worrgrendel said:
Not sure if anyone was a fan of the show but Peter Pan was one of the main villains for one of the seasons of "Once Upon A Time" and boy was he as evil as evil comes. Definitely not modeled after the Disney sanitized version of him. I like it and prefer him evil. Tired of Hollywood sanitizing things.
Click to expand...

He is pretty much a perfect example of chaotic neutral if you go by the book.
R

Peter Pan in the book certainly isn't evil. But he's callous and very self-centered.
My favorite Peter Pan quote: "To die will be an awfully big adventure" - I don't know if such a sentiment can be assigned to any particular alignment, although it does sound very chaotic.

This is an epic treatment of Peter
A

Savage Wombat said:
I wrote up a Ravenloft domain for Peter Pan that I liked a lot but never got a chance to run. (Tink was the Darklord.)
Click to expand...

I would love to see it sometime.
A

I don’t think peter is evil. I just think his sanity dropped to zero.

My understanding is that Tink is one of his best friends. Am I wrong?

bedir than said:
My understanding is that Tink is one of his best friends. Am I wrong?
Click to expand...

Because if I'm right, he killed a good friend. Which seems quite evil.
R

Peter Pan is basically a young, egotistical Edwardian gentleman. He's interested in Wendy as a wife. Tinker Bell is just his throwaway girlfriend. The Lost Boys are his hangers-on (i.e. young gentlemen who are less well-off than Peter and hope to benefit from his largesse).

I'm not sure what the point of breaking regular Advantage/Disadvantage rules is. If the author doesn't like how these doesn't stack, he should just say so.

Many abilities (Glitter, Restore, etc) seem to replicate standard spells. While I respect including the complete effect, each effect should probably state what spell and level it replicates. As is, you just run the needless risk of your effect being slightly different.

"Ensared by it's shadow" (ensnared misspelled)

"he’s a swordsman on par with a pirate captain (who admittedly might not be that good, what with the amputated hand)"

Since there's an official bandit/pirate captain stay block in the Monster Manual, how does Peter fare against it.

I don't remember specifics, but does Peter's stats motivate +3 CR? (I believe a regular Pirate Captain is CR 5)