Though he’s got a bird head this entry in Epic Monsters is decidedly more bookish than he is monstrous: the ancient Egyptian god Thoth! 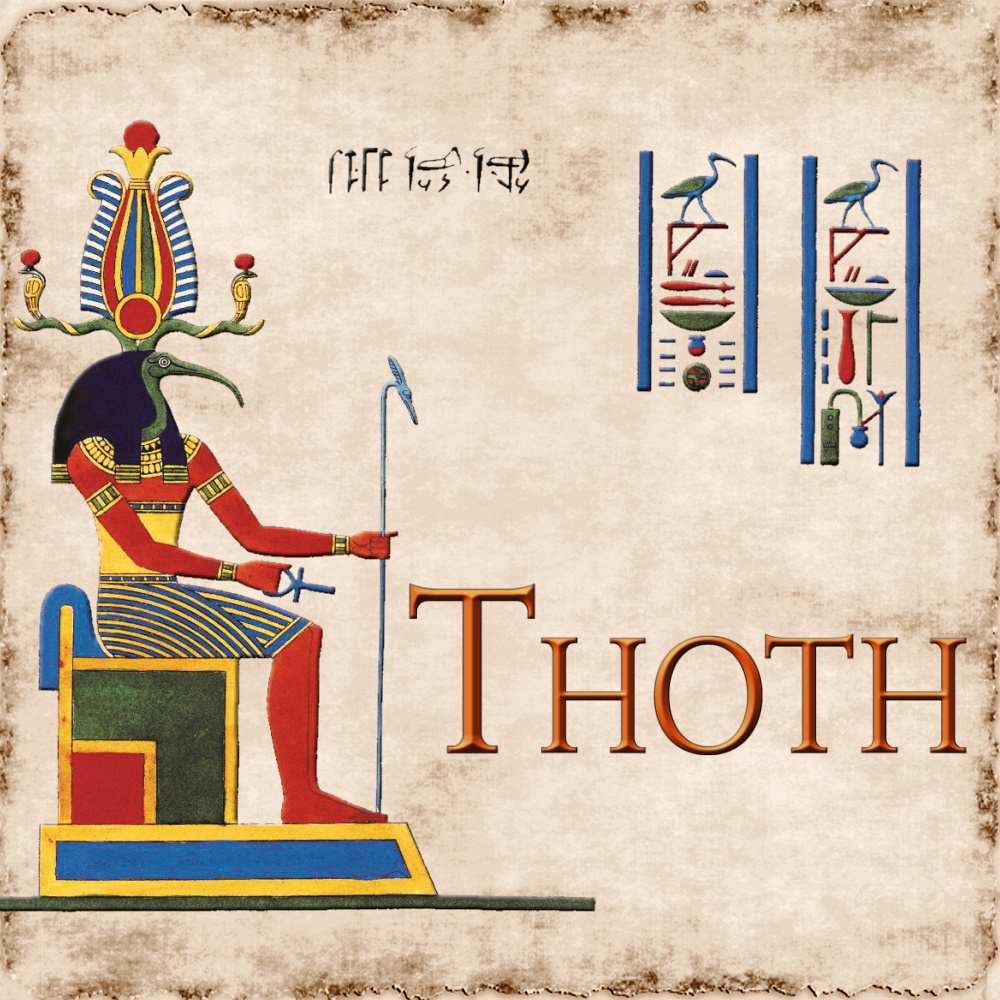 Also known as ḏḥwty, Jehuti, Jehuty, Tahuti, Techu, Tehuti, Tetu, and Zehuti, sometimes with honorary titles (A’an, Asten, Hab, Khenti, Mehi, Lord of Khemennu, Sheps, and Thrice Great), Thoth was one of the more important deities in the ancient Egyptian pantheon. He is frequently depicted as having a human body with the head of an ibis, wearing a crescent moon headdress if in his Ankher or Shu forms—and also sometimes as a baboon with a dog’s face or (when in his A’an or Aani form) a human with a baboon head representing equilibrium, and typically with an ankh in hand (symbolizing life). It’s no surprise then that ibis and baboon are sacred to Thoth!

Thoth handled a lot of stuff—his domains include art, astrology, astronomy, the dead, hieroglyphs, judgment, law, magic, mathematics, medicine, philosophy, science, wisdom, and writing. He had a female equivalent as well (Seshat) and was married to Ma’at (or depending on where you’re at, maybe Nehmetawy, or possibly Seshat the former goddess of wisdom that’s sometimes referred to as his daughter which is a weird crossing of histories that is totally not creepy at all). Thoth and Ma’at each stood on one side of Ra’s solar barque for the night time trips on Mesektet (not daytime voyages on Mandjet aka the Boat of Millions of Years), and he led the “Ogdoad”, an Egyptian pantheon of 8 gods, in between the business of maintaining the universe. As the scribe of the pantheon (beloved by mortal scribes), Thoth invented the 365 day calendar, hieroglyphs, writing, and calculated the creation of Earth, the heavens, stars, and everything that comes with those.

His beginnings were a touch humbler however. Thoth started as a god of the moon but its importance for society (signifying events, rituals, and so on) gradually saw him elevated to a deity with much more in his purvey. When the goddess Nut was found to be sterile for the 360 day long year, Thoth gambled with the moon and won 1/72nd of its light—5 days that allowed the wanting goddess to bear Isis, Nephthys, Osiris, and Set with Geb. He also helped Isis restore Osiris leading to the birth of Horus. Whenever Anubis weighs out the heart of a newly arrived dead in Duat (the underworld) using the scales of Ma’at, it was Thoth’s job to record the result. A heart that weighed as light as a feather sent the dead on to the afterlife, but otherwise they would be consumed by the crocodile-hippopotamus-lion chimera Ammit.

The main shrine to Thoth was in Hermopolis until it was destroyed in 1826 but in January 2020 archaeologist Mostafa Waziri and his team unearthed a score of sarcophagi in Tuna el-Gebel in Minya containing officials and high clergy of Thoth. The greeks largely merged Thoth with Hermes and later scholars theorized that he may have been just a man (specifically Moses because of their authorship and creation of laws)

Design Notes: With this entry we’re once again well past the standard measure for monster challenge ratings—only fitting for someone that’s nearly the peer of Odin. To represent that we’ve hooked Thoth up with a powerful ankh of life to maximize his spellcasting, and we’ve given him slightly less but more versatile spellcasting than old one-eye’s got. Plus of course Reject the Dead which is unlikely to come up often, but seems important for the arbiter of the afterlife. And some tool love. Although Thoth is slightly better at magic, given his lower AC and hit point total we’re docking him a bit and settling on CR 33 (if it came to blows Odin or Satan would win in a fight, but it’d be a pretty tough battle for either).

Ankh of Life. While Thoth is holding his ankh, he regains 20 hit points at the start of his turn if he has at least 1 hit point, and when he would normally roll one or more dice to restore hit points with a spell Thoth instead uses the highest number possible for each die.
In addition, he is able to concentrate on up to 2 spells at the same time by storing one in the ankh. If Thoth fails a concentration check while concentrating on more than one spell, he loses both spells. In addition, while he is using one or more concentration spells Thoth gains one extra bonus action each turn that can only be used to manipulate those spells.

Divine Intellect. Thoth always knows how long it will be before the next sunset or sunrise, the northerly direction, and can perfectly remember anything he’s experienced within the last 10 years. In addition, Thoth gains double his proficiency bonus (+10, +20 total) to and has advantage on Intelligence checks.

Legendary Resistance (3/Day). If Thoth fails a saving throw, he can choose to succeed instead.

Magic Resistance. Thoth has advantage on saving throws against spells and other magical effects.

Mastery of Tools. Thoth gains double his proficiency bonus (+10, total +20) when he makes an ability check that uses a tool kit.

Reject the Dead (5/Day). Thoth can use a bonus action to deem any number of undead he can see to be unworthy. Each undead he chooses must make a DC 28 Wisdom saving throw. If the creature fails its saving throw, it is turned for 1 minute or until it takes any damage. An undead that fails its saving throw is instantly destroyed if its challenge rating is 8 or below. A turned creature must spend its turns trying to move as far away from Thoth as it can, and it can’t willingly move to a space within 30 feet of him. It also can’t take reactions. For its action, it can use only the Dash action or try to escape from an effect that prevents it from moving. If there’s nowhere to move, the creature can use the Dodge action.

Divine Power. Thoth casts a spell of 3rd-level or lower.

Extra Rejection. Thoth uses Reject the Dead. This does not count against his daily uses per day.

Judgment (Costs 2 Actions). Thoth redistributes up to 100 hit points among creatures he can see. This cannot reduce a creature below 1 hit point or increase a creature's hit point total beyond its maximum. A creature can make a DC 28 Charisma saving throw to resist this effect.

I just love your creations.

Reject the Dead seems a little wimpy, even given the origin. How about having the undead - regardless of CR - roll a second die if the first save fails and if that too fails then it is destroyed? Also, as is, I think it would be cleaner if the CR for those destroyed were 10 - the same as Thoth’s Proficiency Bonus.

Feels like any adventurers attacking him, and dying as a result might not get as pleasant afterlife as they had thought...

On a tangentially related note, I was just recently re-reading the old 2E Spelljammer splatbook The Complete Starfarer's Handbook so this made me think of one of Thoth's fellow Ancient Egyptian gods, Ptah, and how he had a huge multi-Crystal Sphere following across Wildspace because His priests were able to receive their magic anywhere, regardless of what Sphere they were in, unlike the priests of every other Power, whose magic was restricted to Spheres in which the worship of the Power was already well-established.

Also, I do believe that Thoth is said to be one of the 1,000 Masks of Nyarlathotep, so this entry also doubles as an alternate form of Ol' Gnarly himself!

I do not usually comment on these mythic beings, but I must pay obeisance to Thoth, the ancient Egyptian god of knowledge, and with that I learned about the ibis bird, with its distinctive long thin beak.

Thoth is actively worshipped to this very day!

D&D 5E Heat Metal and whether constructs are both creatures and objects?