This time in Epic Monsters we're going after the truth-telling lion, goat, or cattle seen in various parts of Asian mythology: the xiezhi! 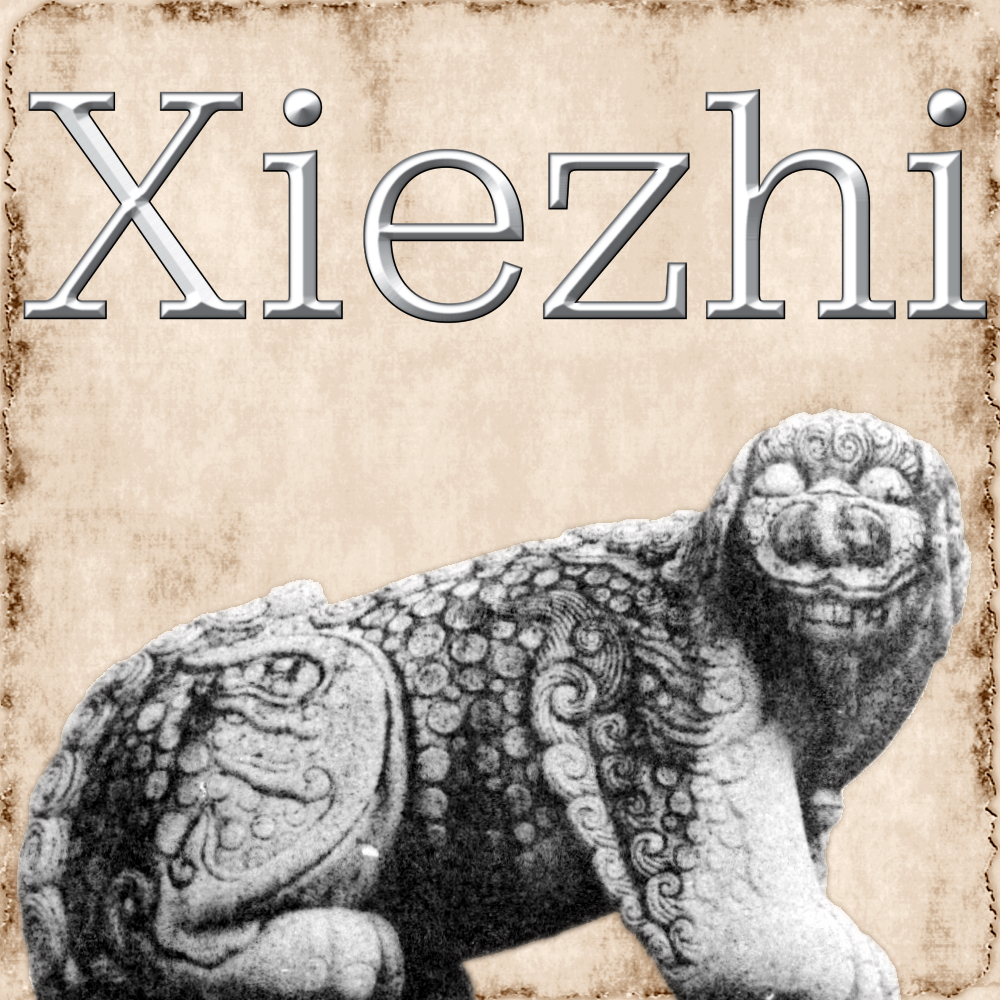 Known by different names in different places—xiezhi in China, kaichi or shin’yō in Japan, or haetae, haitai, or haechi in ancient Korea—the xiezhi is a symbol of law and protection. It’s said that one dwelled amongst the court of Emperor Shun during the Han Dynasty, kept by the minister Gao Yao, but no matter where one looks its main quality remains the same: it inherently knows lies from truth, butting up against whoever is using deception or simply in the wrong. Its descriptions change as well—sometimes it has scales, sometimes sharp scales, sometimes it’s more like cattle, others more feline or goat-like. Usually I think it's got a horn however the best piece of artwork I could find for it doesn't have one.

Design Notes: There’s definitely an implication that this might fit as a fey creature, but that opens up conjure fey and nobody wants to completely undo intrigue with a truth-telling friend only a summoning spell away so we’re going with monstrosity instead. Otherwise it’s getting the traits of the animals mythology kins to it, with a little bit of tweaking to knit them together a bit better. Let’s do the numbers! The DMG comes in a little lower (at 3.25) than the Blog of Holding’s 3.8333, averaging out to 3.54. It’s definitely not a pushover CR 3, but that feels about right. Probably a good bet that direct combat really isn’t in the cards for the xiezhi anyway—but it’ll put up a hell of a fight when a group of adventurers or other ne’er-do-wells try to kidnap it before their appearance in court.

Charging Pounce. If the xiezhi moves at least 20 feet straight toward a target and then hits it with a horn attack on the same turn, the target takes an extra 9 (2d8) piercing damage. If the target is a creature, it must succeed on a DC 14 Strength saving throw or be knocked prone. If the target is prone, the xiezhi can make one claw attack against it as a bonus action.

Keen Smell. The xiezhi has advantage on Wisdom (Perception) checks that rely on smell.

Pounce. If the xiezhi moves at least 20 feet straight toward a creature and then hits it with a claw attack on the same turn, that target must succeed on a DC 14 Strength saving throw or be knocked prone.

Running Leap. With a 10-foot running start, the xiezhi can long jump up to 25 feet.

Sure-Footed. The xiezhi has advantage on Strength and Dexterity saving throws made against effects that would knock it prone.

Truth Sense. The xiezhi immediately knows when a creature it can hear speaks a deliberate lie.

Wow, very cool; a creature I have actually never even heard of before at all! That is extremely rare and I thank you for it!

My suggestion is a unknown race of humanoid monsters, the "wu-cou" (fish-lizard), based in real historical facts.

The wu-cou were the Spanish troopers who won in the 1582 Catayan battles against the wako, the Japanese pirates. I am afraid to hide their defeat they told that zone was by a race of demons, half-fish, half-lizard. I like the idea of "you feel aversion towards us, but we are not monsters, but the good guys, who defended our honor and our land, and we can't enjoy our glory, but cursed by our criminal attackers". Something like the ugly cousins of the tritons.

[Addendum] Hmmm... after reading the description of this creature, and seeing statues of it after looking it up on Wikipedia, really reminds me of the Ki-Rin; I'm thinking they are mythologically related, perhaps? Like how all of those old Middle Eastern animal-hybrid celestial creatures, such as the Shedu and Lamassu, are all similar looking to the animal-hybrid descriptions of the angels in the Bible because they all descended from common Middle Eastern mythological roots.

(Speaking of which; some Biblically accurate descriptions and stats for Cherubim and Seraphim and other such angels would make for some really cool entries in this series. Biblical angels were absolutely not winged humanoids as portrayed in modern popular imagination, like Planetars and Solars [even as cool as those creatures are in D&D] but were actually really bizarre non-anthropoid entities, like some kind of LSD-trip hallucinations (because seriously, the prophets and religious mystics who described them all were most likely using some kind of entheogenic herbs to "assist" their visions); rotating rings inside of rings, all covered with eyes and multiple flaming wings, and the like. The old 3rd Edition Anger of Angels book by Sean K. Reynolds is a wonderful source of D&D-style information for Biblically accurate angels.)

This all makes me remember some news that popped up on the Internet a few years ago, when North Korean propagandists claimed that Kim Jong-Un had discovered the cave-dwelling of what the Western press called a "unicorn" but was actually supposed to be a Ki-Rin.

The intent of the North Korean* propagandists was to create a link in the minds of North Koreans between the Kim family's legacy and the legendary Ki-Rin, which has associations with the ancient Emperors of China, trying to bolster the family's claims of leadership and infer that they had the "Mandate of Heaven" by implying that they had received the divine favor of a celestial being like the Ki-Rin.

It was all ridiculous, of course, and would be about the same as if Queen Elizabeth died and Charles ascended the throne, and he suddenly claimed that he had found Excalibur and that therefore gave him the celestial right to restore the full autocratic monarchy with him as divinely appointed King.

*[I initially typo'ed that as "North Gorean." Now I have a bunch of disturbing mental images of Kim Jong-Un in barbarian attire, surrounded by scantily-clad slave girls at his feet... yuck.]

Making the early pirates of China, Korea, and Japan into fish monsters is a bigger leap than what the initial research suggests and is a little against the grain for the authenticity I usually strive for in this column, but I'll dig about some and see if maybe they had some really distinct practices or techniques that are worth a unique statblock.

Biblical angels and such --> added to the queue!

Mike Myler said:
but that opens up conjure fey and nobody wants to completely undo intrigue with a truth-telling friend only a summoning spell away so we’re going with monstrosity instead.
Click to expand...

I'm not seeing the problem here. There are - across the various editions - numerous truth-detection spells. The xiezhi appears, does its thing, and departs. The resource - a spell slot - has been expended. Indeed, the Lord of the Xiezhi could be a fey patron of a truth-oriented warlock.

In 5E the zone of truth can be resisted and trumped by glibness, but the xiezhi's trait isn't using magic, it just automatically detects lies. Effectively it's tooling around with a lore ability that overcomes an 8th-level intrigue spell so anything short of a wish to gain access to it is no bueno.

Quartz said:
I'm not seeing the problem here. There are - across the various editions - numerous truth-detection spells. The xiezhi appears, does its thing, and departs. The resource - a spell slot - has been expended. Indeed, the Lord of the Xiezhi could be a fey patron of a truth-oriented warlock.
Click to expand...

I see it as more of a Celestial being, personally.

Interesting entry as always Mike - thank you! I like all of the traits, they help this creature due interesting things. I might have stuck with fey, or if the summon thing really worries you (it doesn't me), go with celestial like Ki-rin. I might give a combo move (maybe it can use a bonus action to bite prone creature - that way it works well with pounce), but otherwise a fun entry.

Aaron L said:
I see it as more of a Celestial being, personally.
Click to expand...

Celestial was on my list of potential types but—conjure celestial. I suppose it would work fine if its CR gets bumped up to 5, but I really didn't find anything about them being badasses so I avoided the urge.