Explore the Worlds of 2000 AD With New JUDGE DREDD & THE WORLDS OF 2000 AD Roleplaying Game!

This year, EN Publishing will be launching the official Judge Dredd & The Worlds of 2000 AD Tabletop Adventure Game! Starting with a full-colour hardcover core rulebook, the many worlds of 2000 AD will be explored - starting, of course, with the most famous character from the pages of the iconic comic book, Judge Dredd! Work is already underway on the game, which will be powered by the WOIN (What's OLD is NEW) rules engine. 2000 AD is Britain's longest running and most celebrated anthology comic, known for its cocktail of explosive sci-fi and fantasy and its mean streak of irony and black humour covering genres such as future war (Rogue Trooper; The A.B.C. Warriors), action/adventure (Judge Dredd; Strontium Dog), fantasy (Sláine; Nemesis the Warlock), steampunk (Stickleback; Brass Sun), horror (Fiends of the Eastern Front; Absalom), and humour (DR & Quinch; Zombo).

EN Publishing, under license with Rebellion, are developing a range of Tabletop Adventure Games and supplements based on the iconic characters and worlds found in the legendary British comic 2000 AD.

“2000 AD has forty years of rich history and storytelling and this worldwide license allows us to explore those characters and stories and bring them to the tabletop” Angus Abranson, Business Manager of EN Publishing said.

The first release will be Judge Dredd & The Worlds of 2000 AD Tabletop Adventure Game, a full colour hardcover book which contains the core ‘Worlds of 2000 AD’ rules as well as setting information enabling the players to not only play Judges, but also civilians and perps, in Mega-City One.

“The rules system we’re using is our own WOIN (What’s Old Is New) engine that also powers our N.E.W. – The Science Fiction Roleplaying Game which spent some time as the #1 best seller on RPGNow” said system designer and EN Publishing Owner, Russ Morrissey. “The system is incredibly flexible and can cater seamlessly for the Celtic environs of Slaine to spacefaring hijinks of the Ace Trucking Co.”

Judge Dredd & The Worlds of 2000 AD will be followed by a series of adventure sourcebooks giving players and Game Masters the opportunity to play through the story arcs that made Judge Dredd such an enduring character.

“We’ll be publishing a series of books, starting with The Robot Wars, which will not only allow players and GMs to play through the events that took place in the comic arc, but also add to the game setting with additional rules or source material relevant to the period or location. So, for instance, Robot characters will be expanded in The Robot Wars whilst in Luna-1 we’ll be providing detailed information on the moon colony and life there” Nick Robinson, Line Developer for the Worlds of 2000 AD Tabletop Adventure Game said. “The idea is to move chronologically through the classic story arcs in the 2000 AD Progs providing adventures for not only Judges, but for those players who may wish to explore the Dredd universe from a different perspective – that of a Civilian or even a Perp. Each book will contain a core adventure, mini-adventures based upon the other story arcs at the time, as well as expanded settingand rules information.”

In addition to the support material for the Judge Dredd campaign a series of ‘Campaign Guides’ are planned which will cover other 2000 AD settings.

Writing and development is well under way with writer Darren Pearce (Doctor Who; Lone Wolf) working on the core rulebook alongside Russ Morrissey and Nick Robinson, with additional content from Robert Schwalb (Dungeons & Dragons; Warhammer Fantasy Roleplay), whilst Andrew Peregrine (Doctor Who; Firefly; Buffy The Vampire Slayer) is writing The Robot Wars.

​
About EN Publishing
EN Publishing is the publishing arm of EN World, the leading tabletop RPG news website and community and the company behind the EN World Gen Con RPG Awards ("ENnies"). EN Publishing has published over 300 titles including the critically acclaimed War of the Burning Sky and ZEITGEIST adventure paths, the popular EN5ider online magazine for 5th Edition Dungeons & Dragons, and the WOIN (What's OLD is NEW) roleplaying game system. https://www.worldsof2000adrpg.com

About 2000 AD
2000 AD is the legendary weekly British anthology comic and home of Judge Dredd, as well as a galaxy of original sci-fi, fantasy, and horror action stars. As well as producing innovative and provocative comics for 40 years, it has brought the industry some of its biggest talents, from Alan Moore, Grant Morrison, and Mark Millar, to Jock, Brian Bolland, Dave Gibbons, and many more. Published in print and digital every Wednesday, 2000 AD is the galaxy’s Greatest Comic and remains at the industry’s cutting edge.
www.2000 ADonline.com 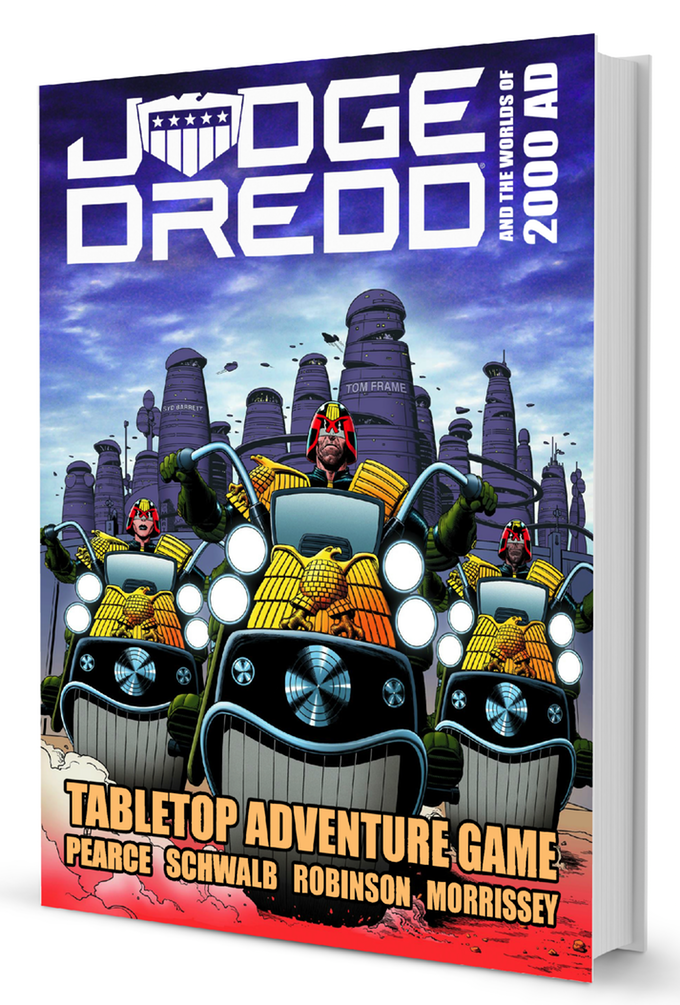 Now This is interesting! I haven't seen the WOIN system, but I could do with a fun romp through the 2000AD universe.

Where can one go to read a review of the WOIN system?

jagerfury said:
Where can one go to read a review of the WOIN system?
Click to expand...


DTRPG has a few for the sci-fi version of the rules.

Looks good! I like the multi-universe approach. Great for the WOIN system. Spiffy website, though I had trouble opening beyond the front page. Anyway, looking forward to it!

Holy crap! This is awesome. Will you be taking submissions or running everything in-house?

Oh wow, that is exciting! Inquiring minds want to know if you can play a droid like Walter.

Ralif Redhammer said:
Oh wow, that is exciting! Inquiring minds want to know if you can play a droid like Walter.
Click to expand...


Yup! Robots will be in the core rulebook, and will be expanded even further in The Robot Wars.

While there are a few of the 2000 AD settings I liked, by and large I don't care for most of them (including Dredd), but for the extra rules to incorporate into my own WOIN setting, and for idea sparks I'm sure it will be worth it.

Congrats, I grew up on 2000AD, along with Battle and Commando comics, with a bit of Fighting Fantasy too. Looking forward to this

Excellent! Now I need to get some minis. Oh wait! http://www.wargamesfoundry.com/our-ranges/2000ad/. I just need them to make some more perps for Dredd and maybe some lawmasters minis!

bsmith said:
Excellent! Now I need to get some minis. Oh wait! http://www.wargamesfoundry.com/our-ranges/2000ad/. I just need them to make some more perps for Dredd and maybe some lawmasters minis!


Warlord Games is the official licensee for 2000 AD miniatures. We'll be pointing people their way for minis.

Morrus said:
Warlord Games is the official licensee for 2000 AD miniatures. We'll be pointing people their way for minis.
Click to expand...


Great! Didn't know that. Got a link to point the way please?

bsmith said:
Great! Didn't know that. Got a link to point the way please?
Click to expand...


I'm on my phone, but their website is warlordgames.com. I assume their announcement is on there somewhere.

Does 2000 A.D have a implied shared universe or are all the comics separate?

jaycrockett said:
Does 2000 A.D have a implied shared universe or are all the comics separate?
Click to expand...


It's a mix. Some crossover, others are clearly separate. That said, you can do what you want with this - cross 'em over as much as you wish! They'll all use the same core rulebook.

Another game on the list for this year. This will be be fantastic!

I'll have to check out NEW now, to see how the system works.

Like the sound of the Nikolai Dante game - that setting just cries out for an RPG adaption, however no word on my 2 favourite 2000ad settings - Strontium Dog, and Ace Trucking Co. ?

I'd have thought Strontium Dog would be one of the first up to adapt. Ace Trucking Co. maybe not so much.

Rogue Trooper: In The Battle For Nu-Earth, Choosing A Side Is Never Straightforward

Stock Up On JUDGE DREDD And WOIN In This Bundle Of Holding!