A thread for new Fantasy Grounds releases!
Last edited by a moderator: Dec 1, 2022

A puzzling headline begins a front-page article found in the Times of London. Three men, all identical in identification, were found dead in the same room of the Chelsea Arms Hotel.
All were dispatched in a similar manner stabbed through the heart.

Then the home of a valued friend burns to the ground, severely injuring him in the process.
An odd summons, a surreptitious meeting, and a thousand-mile journey begin on the legendary rail service carrying the investigators to Constantinople, the Gateway of the Orient.

HORROR ON THE ORIENT EXPRESS contains a massive and legendary campaign, of up to nineteen adventures and more than 1100 pages, for the Call of Cthulhu roleplaying game.
Beginning in 1920s London, the investigator's journey to Paris and thence to the ancient city of Constantinople. With luck, they also return home.

Optional episodes are set in ancient times or special places (Roman-era, Dark Ages, Gaslight-era, the Dreamlands) so that the players can experience the founding, creation, and discovery of crucial elements of this campaign.
Also included is a modern-day coda to the storyline, an alternate ending for those wishing for a shorter campaign, and a built-in survival guide to aid beleaguered investigators.

The Underworld calls! Can you resist its dark lure?
The expanse of the Dragon Empire is nothing compared to the vast and mysterious realms that lie beneath it.
Deep within the Underworld lie adventure and treasure--as well as madness and death. But what is reward without risk?
With the Book of the Underworld, designer Gareth Ryder-Hanrahan ( Eyes of the Stone Thief, Book of Demons, Book of Ages ), reveals the Underworld's secrets for 13th Age. 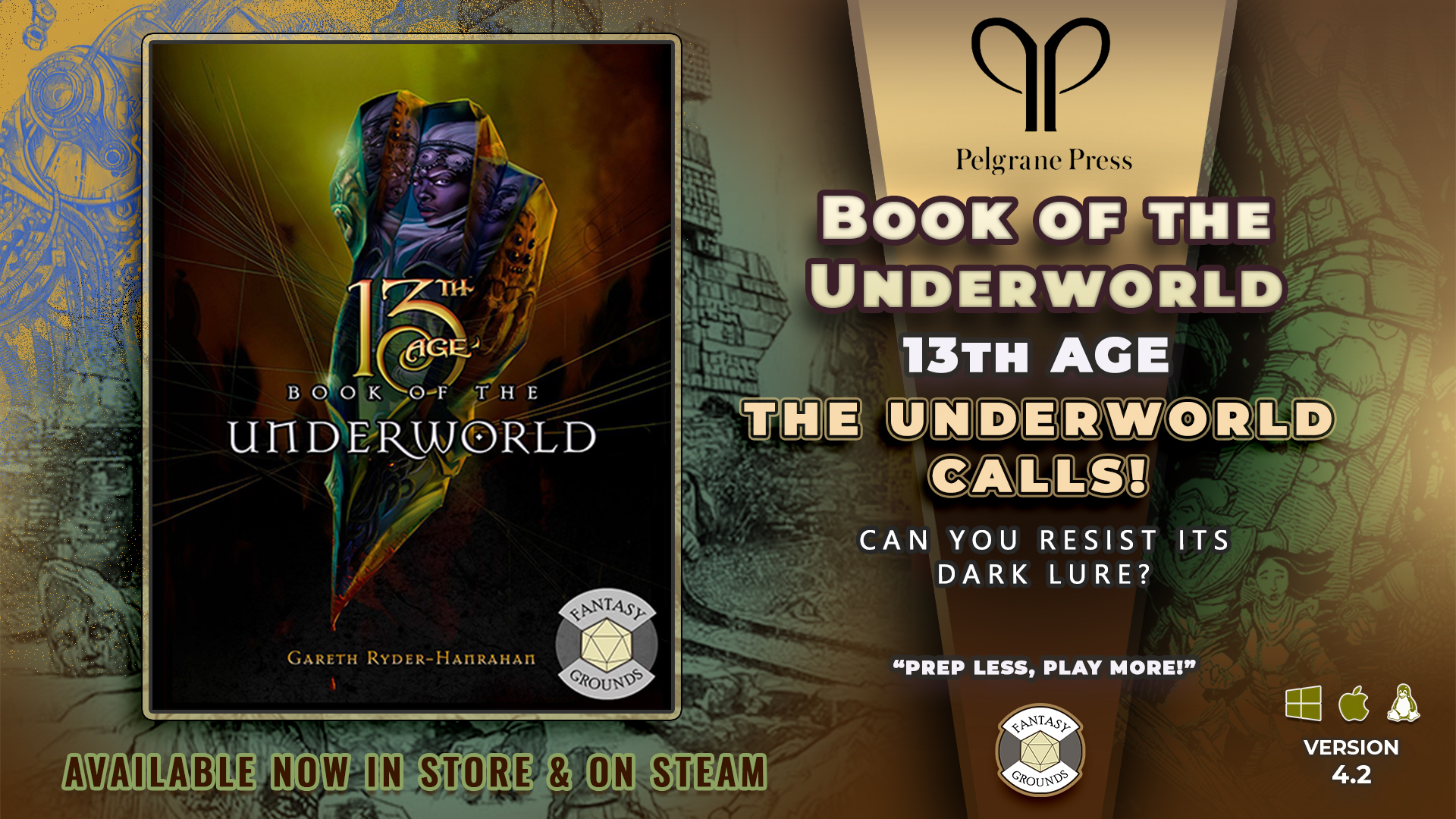 As the heroes continue to explore their newfound alien world, they discover an ancient monastery deep underground.
Exploring this ruin reveals intriguing glimpses at the planet's long history, but as the PCs return to the surface, they find a small Aspis Consortium-connected village established illegally in their territory.
When things start going wrong in their own settlement, the PCs must establish whether it is just bad luck or deliberate sabotage on the part of these troublesome newcomers!

"Serpents in the Cradle" is a Starfinder Roleplaying Game adventure for four 3rd-level characters.
This adventure continues the Horizons of the Vast Adventure Path, a six-part, bimonthly campaign in which the heroes are at the forefront of exploring and charting a newly discovered world filled with mystery.
This volume also includes a look at the shady Aspis Consortium, relics of the philosophy of balance and renewal, and a selection of diverse alien creatures. 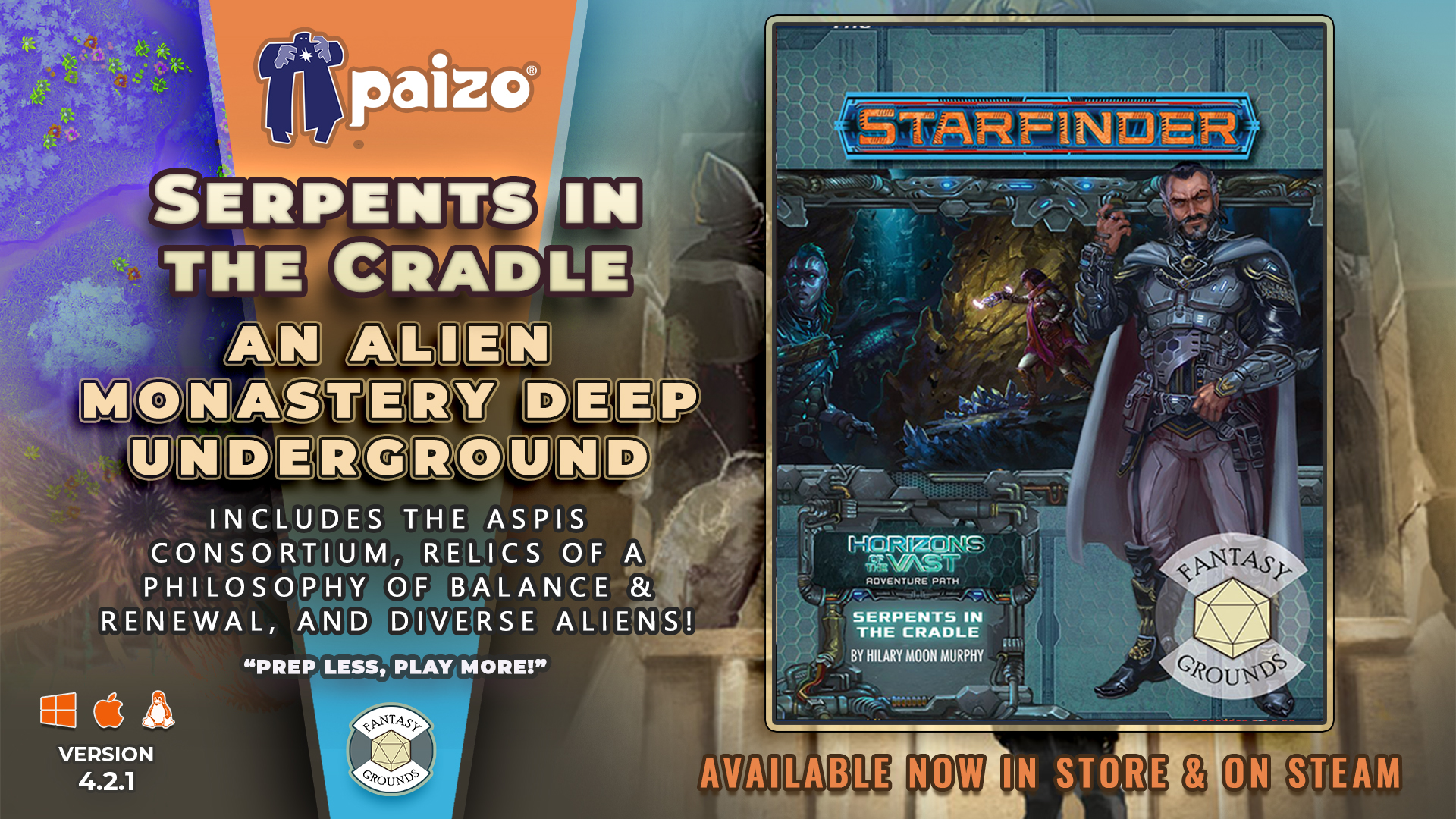 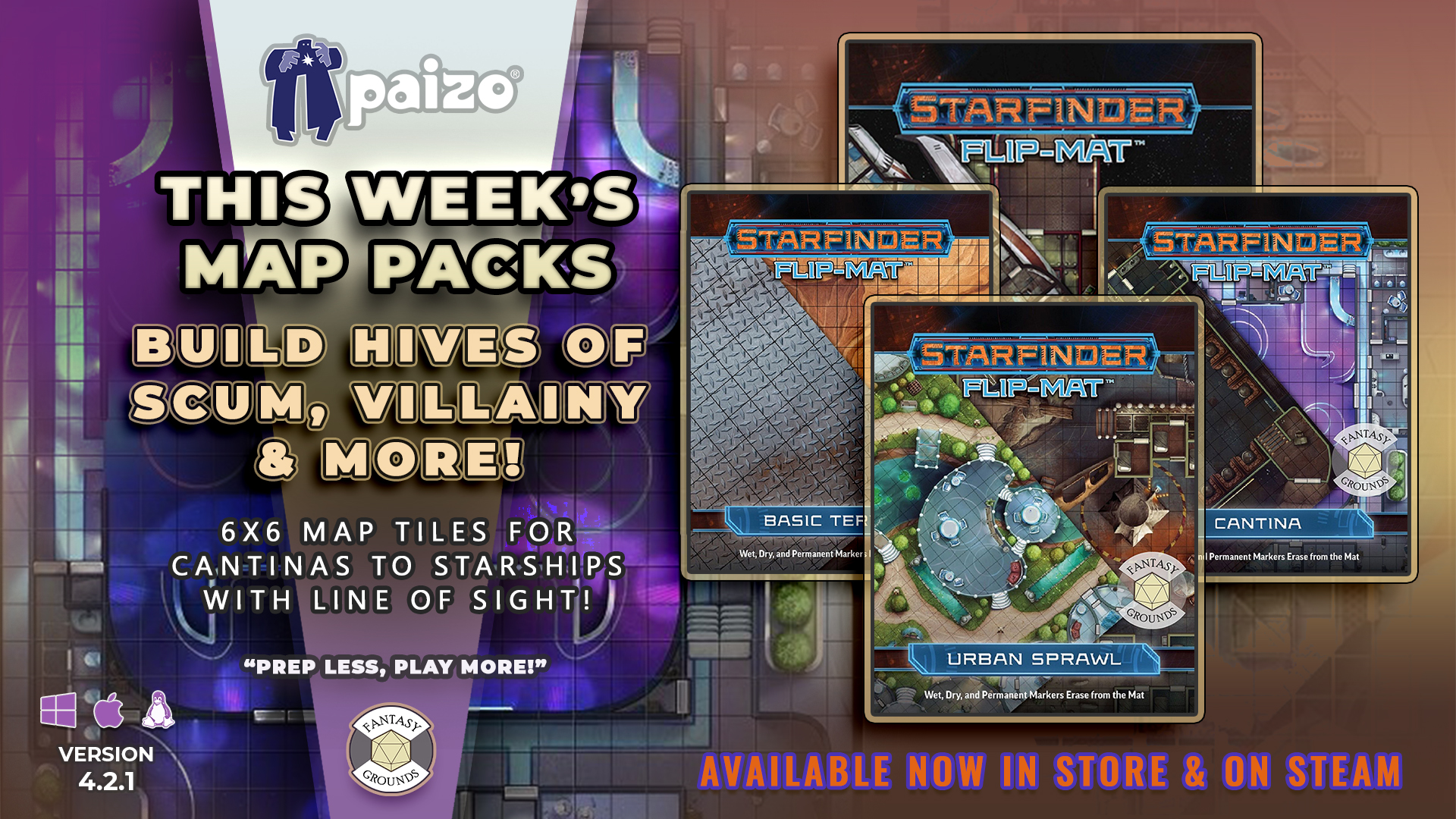 This is the seventh installment of the Darkenfold Adventures. It is designed for 3-5 characters in the mid to high-level range.
The party is confronted with the power of the Green Wizard.
The adventure takes place along the banks of the Mistbane River near its confluence with the Powder River. 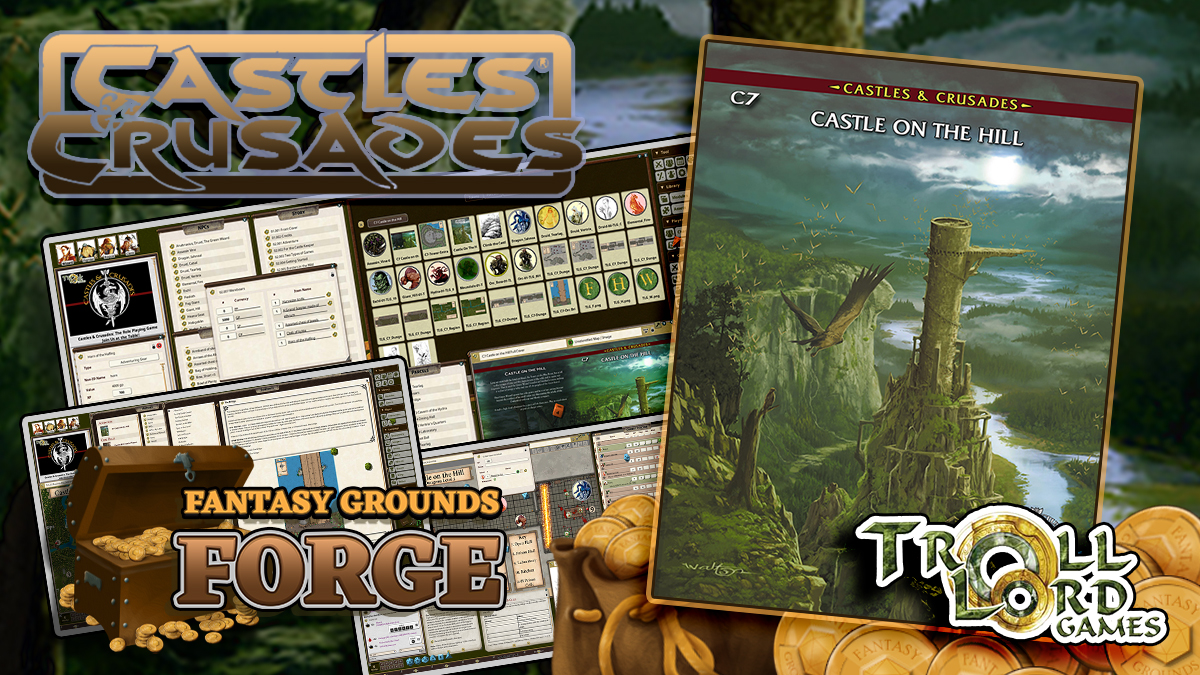 It begins with a shipwreck on a cold, gray night in Lankhmar. The Temple of the Shark God has come to Lankhmar. They teach "the Way of Predation," an extreme version of survival of the fittest. The city begins to take its message to heart. Tempers rise. Violence flares. And the city burns. Is the cult the cause of the troubles? Or is there something more ancient, more powerful at work? Your scoundrels, rogues, and heroes must find out before everything they know vanishes in... A Night of Blood and Teeth! A Night of Blood and Teeth is an adventure for Lankhmar: City of Thieves. It requires the Savage Worlds core rules. 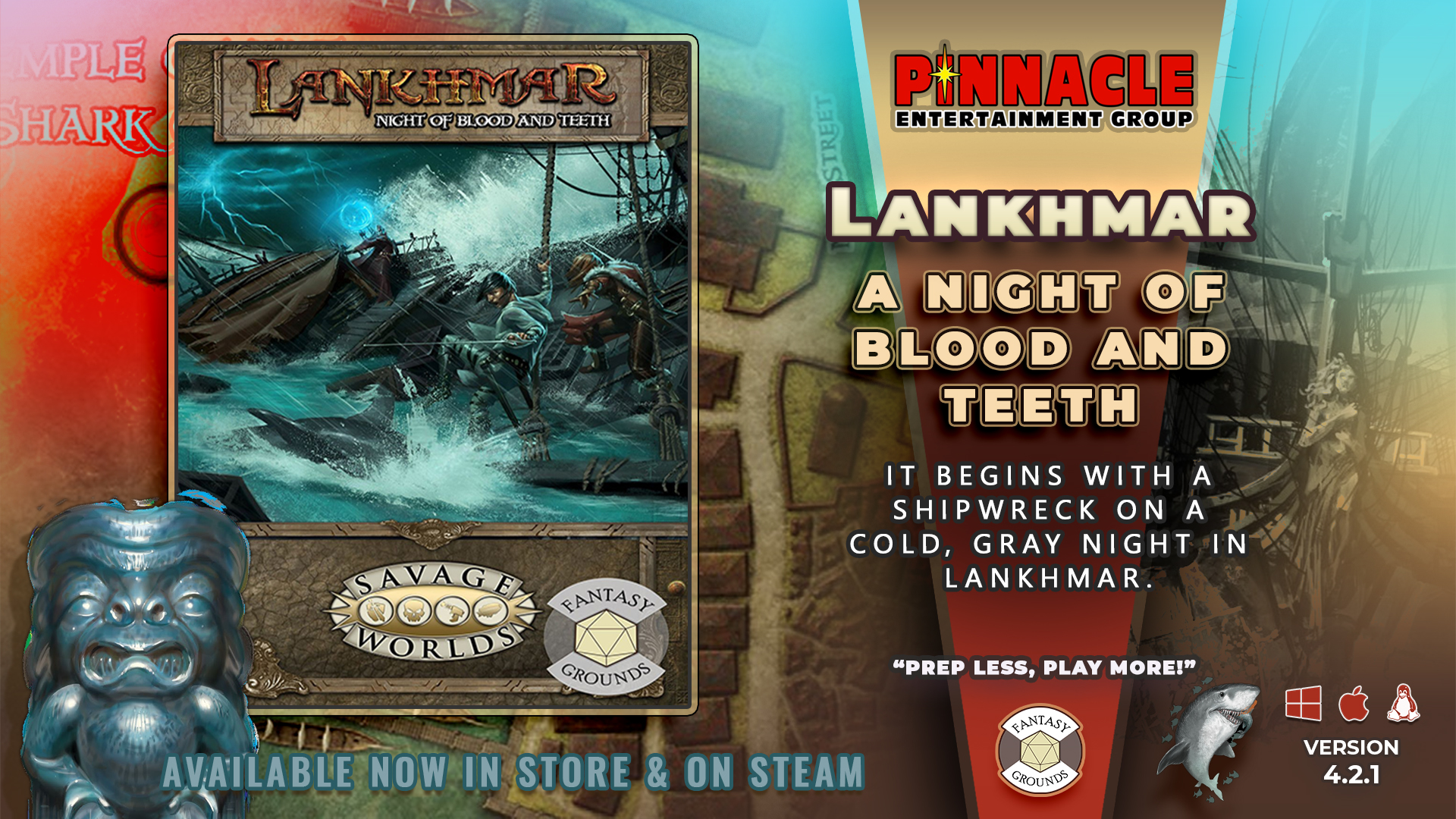 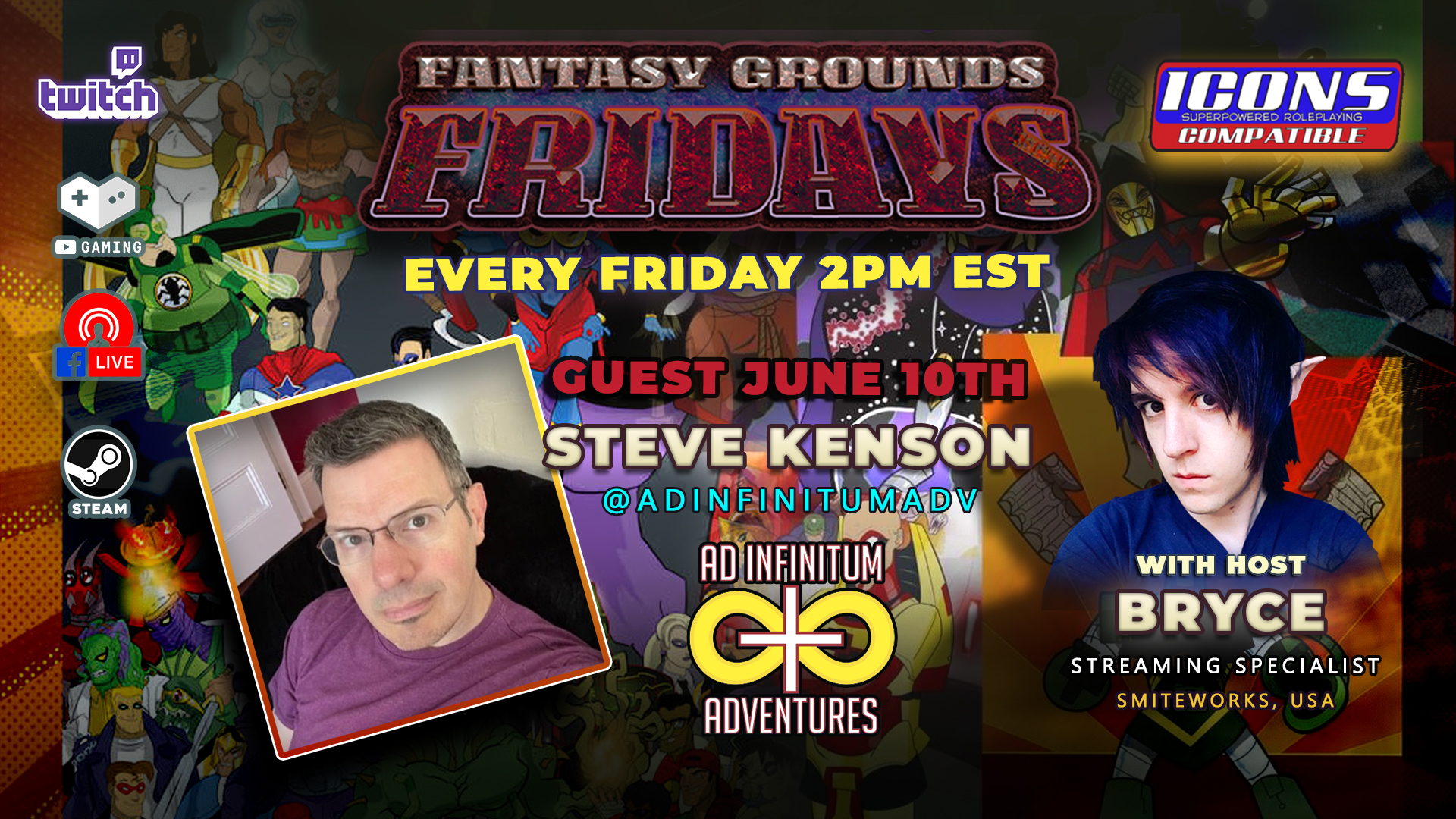 The Dune: Adventures in the Imperium roleplaying game takes you into a far future beyond anything you have imagined, where fear is the mind-killer so be sure to keep your wits about you. The Imperium is a place of deadly duels, feudal politics, and mysterious abilities, noble Houses politic constantly for power, influence, and vengeance in a universe where a blade can change the fortunes of millions. Build your House, carve your place in the universe or rebuild an ancient lineage and fight for the Imperial throne.

Take your characters on a journey through the storied worlds of Frank Herbert's sci-fi masterpiece, inhabit elite agents working for noble Houses where Mentats, Swordmasters, Spies, Bene Gesserit Sisters, Devious Advisors, or even desert Fremen join together to follow your banner. 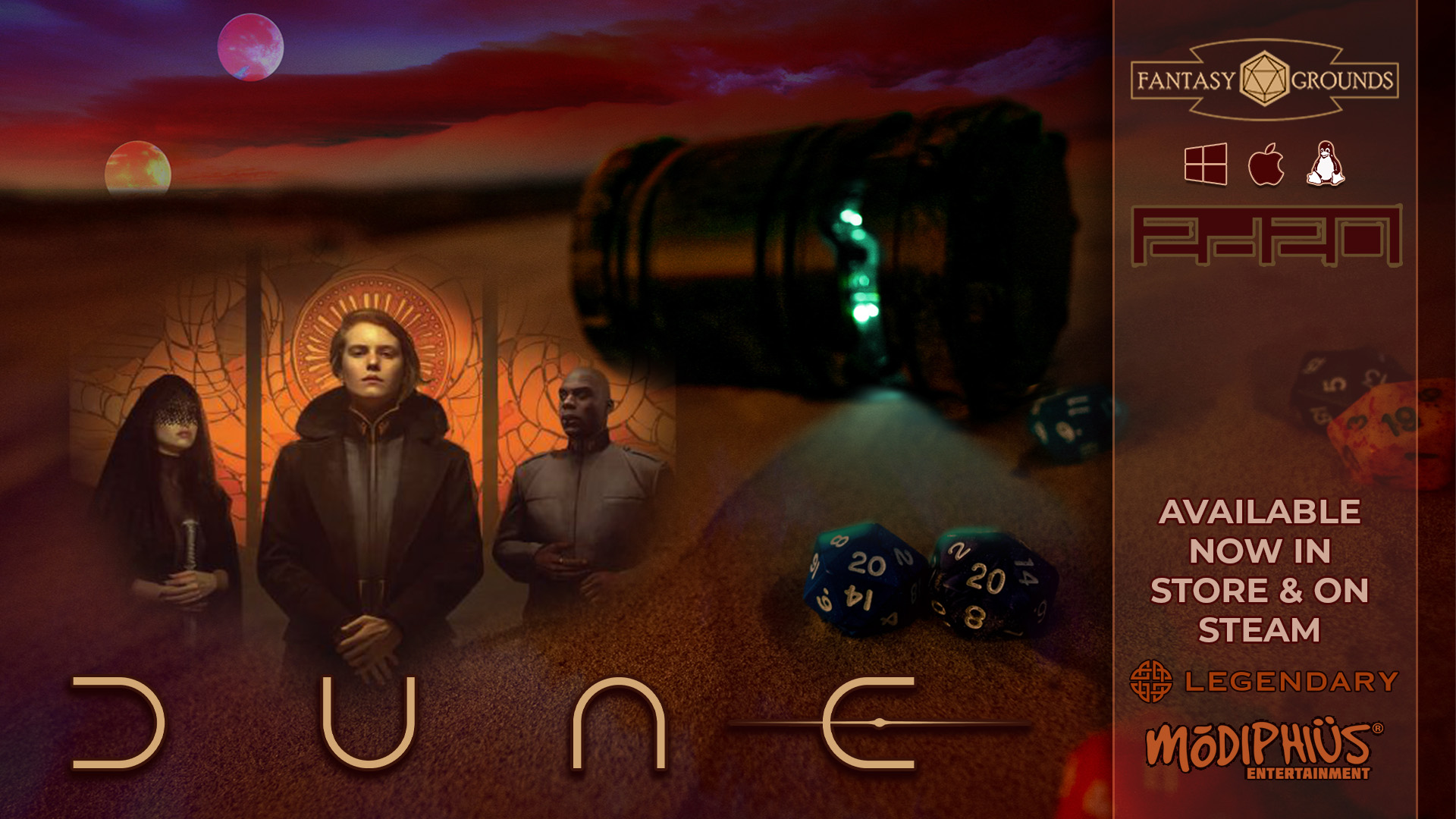 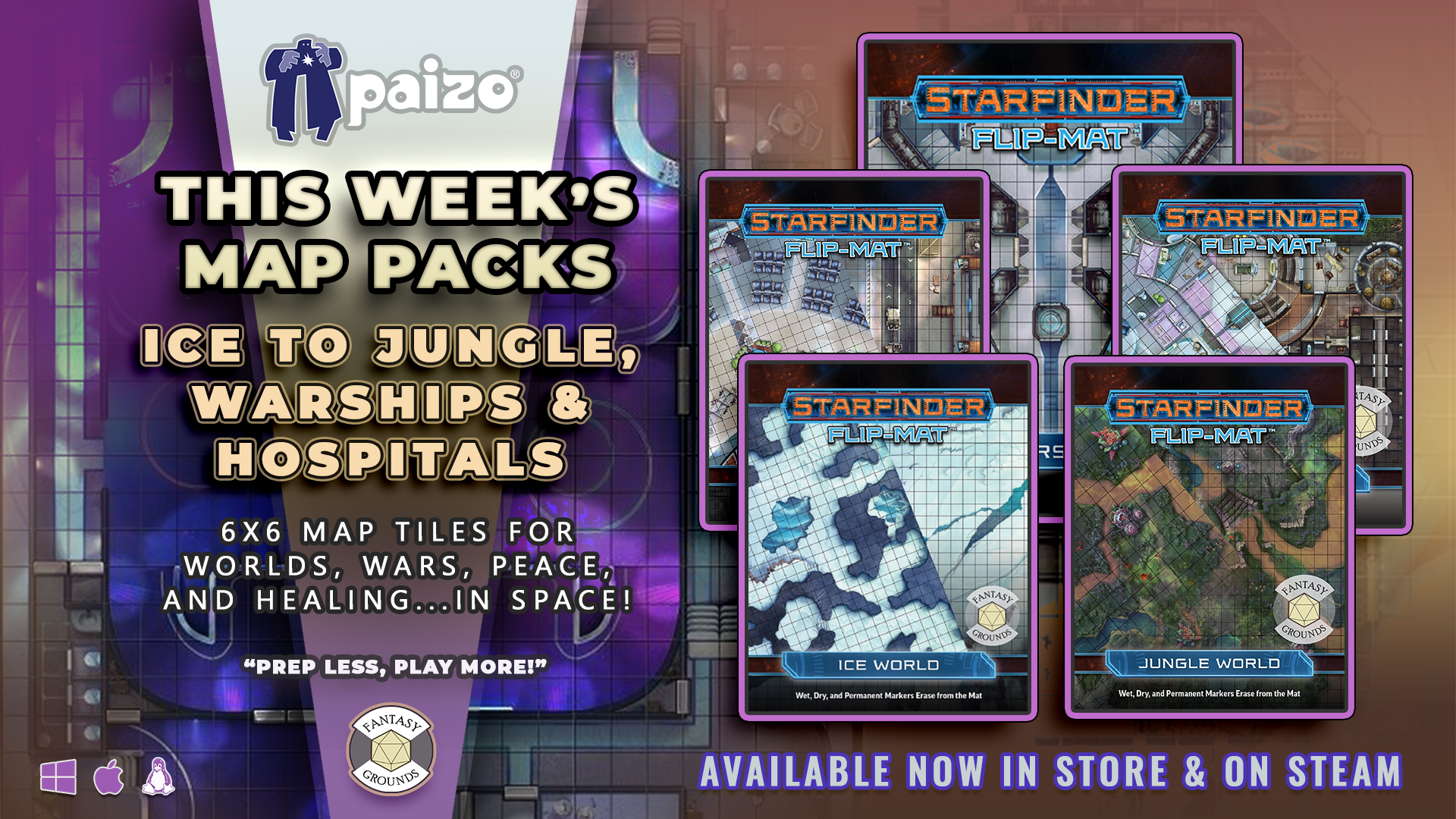 The Solomani Front is a land of opportunity, lying between the open worlds of the rimward fringe and the vast markets of the Imperium. Cross-border trade and diplomacy form a backdrop for covert operations, intelligence-gathering missions, and backstreet skullduggery. With factions pushing their own agendas at the expense of others, the knife and the bomb are tools of diplomacy to many. 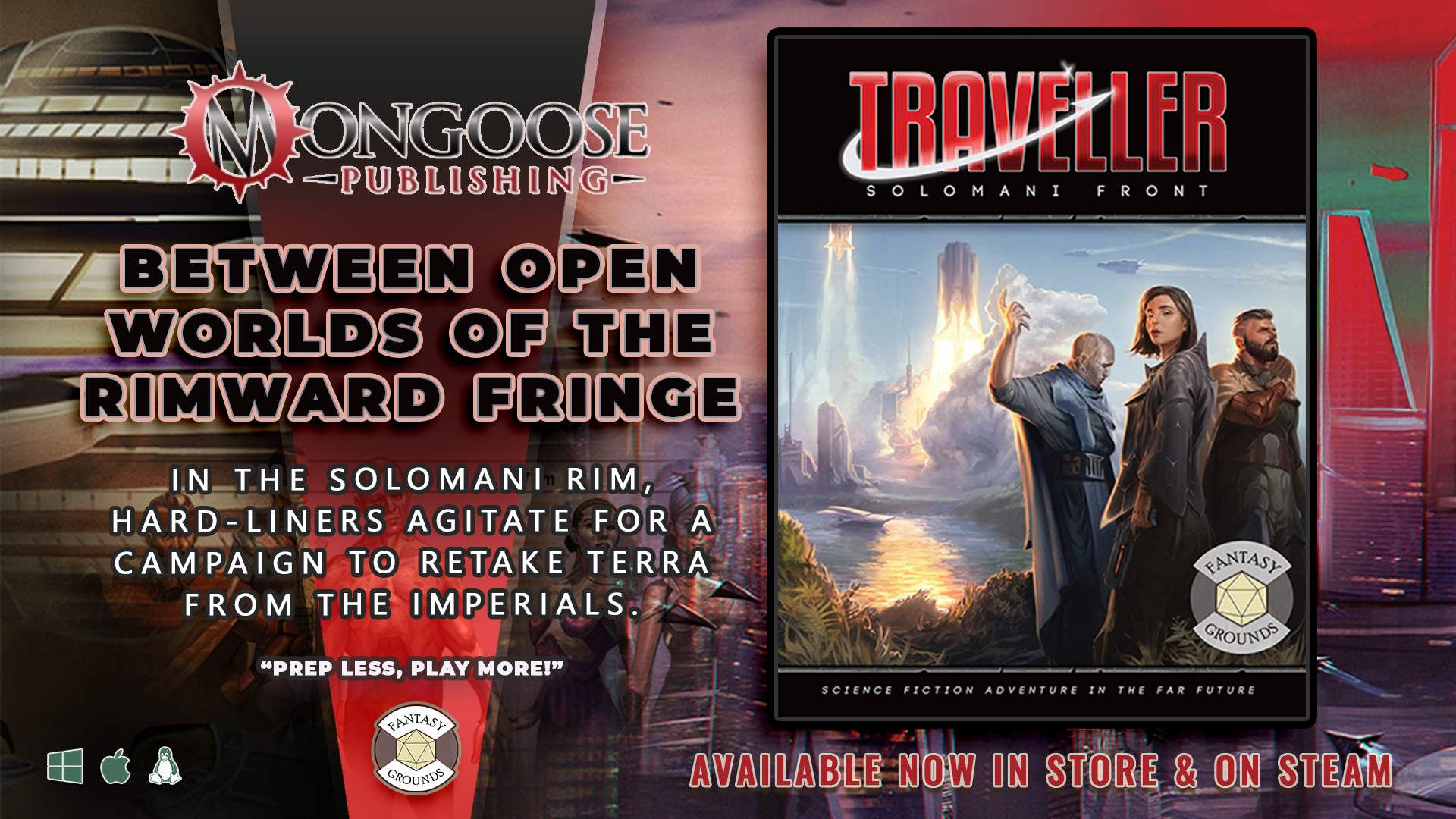 Venture into the vault of Vaz'kin'rai, and pour over the Spire's research into its mysterious origins...

Get both Vaz'kin'rai and Enchiridion: Vaz'kin'rai together in one place! Take your players on a 1st level one-shot beneath the village of Dur, and sprinkle the Enchiridion's contents throughout your larger campaign. 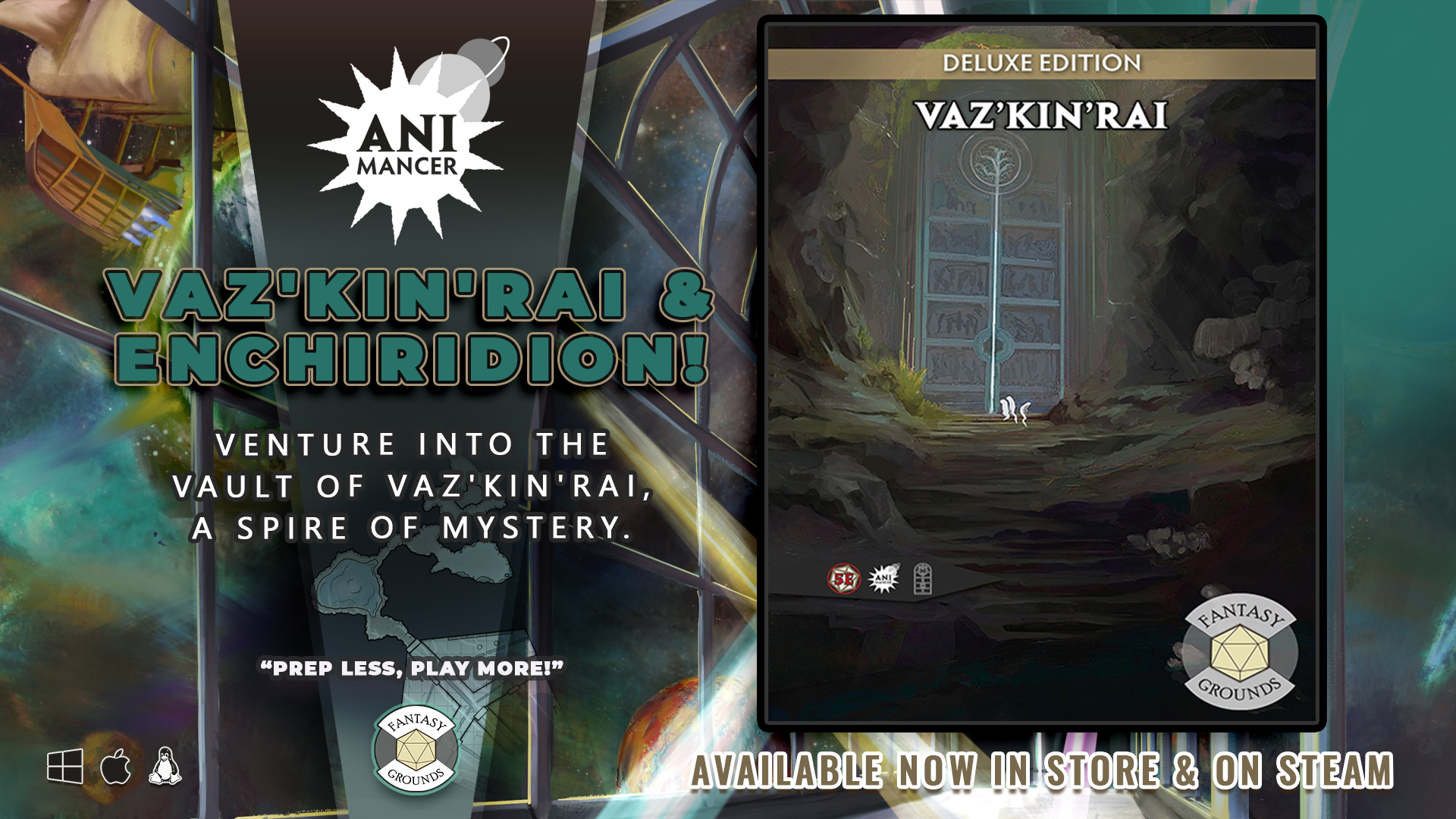 With these tiles, you can shape any cathedral big or small within minutes.
This set is for Fantasy Grounds Unity only, contains reusable tiles that snap into place, and has line of sight predefined for ease of use. 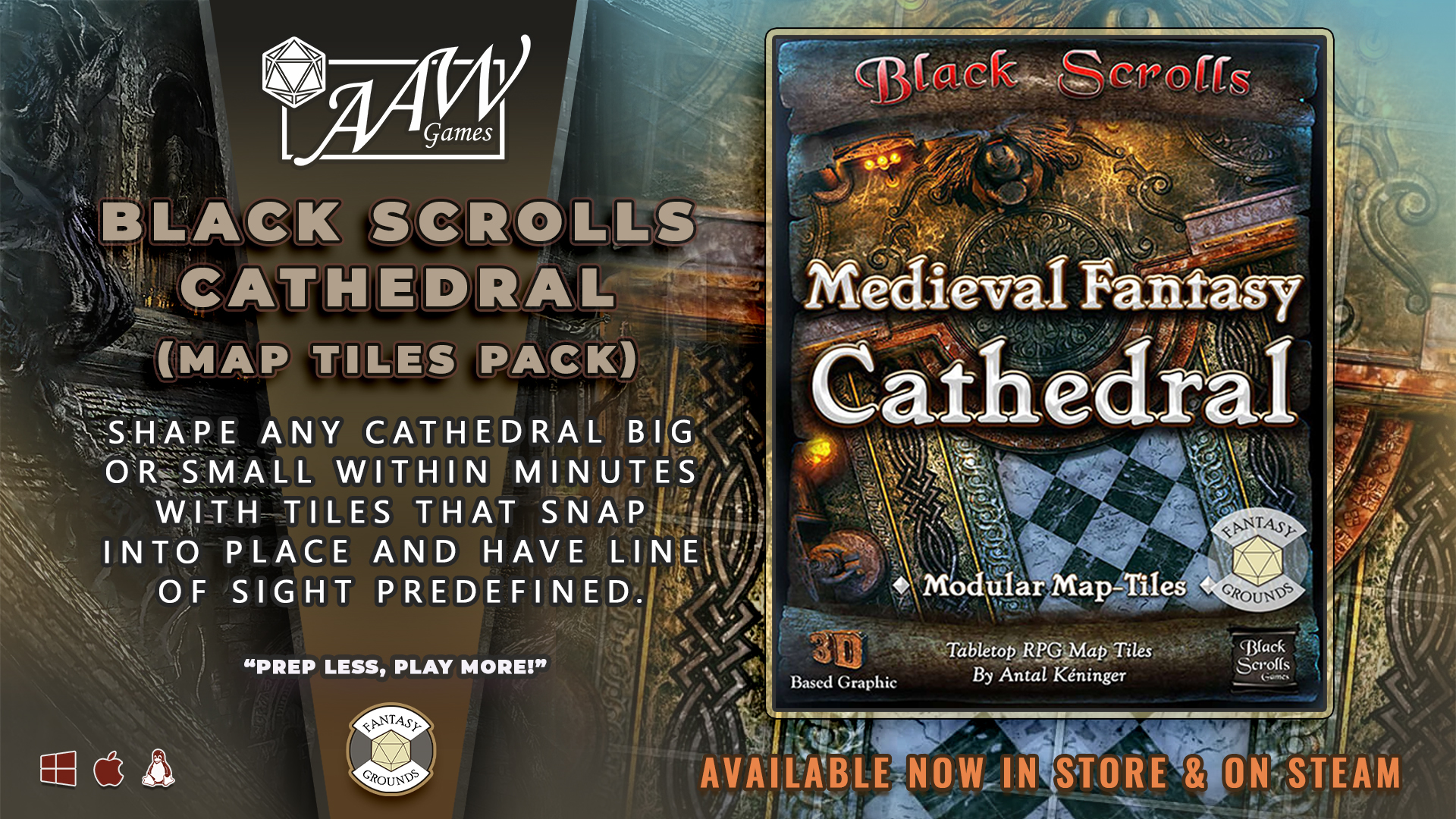 New Release
D&D Adventurers League 10-09 Recipe for Retribution
Wizards of the Coast
$4.99
https://www.fantasygrounds.com/store/product.php?id=WOTC5EDDAL1009
The plan is in motion, and you must scour the breadth and depth of IcewindDale for the components an extraplanar stranger needs to create explosive devices powerful enough to bury the ancient Abeiran city of Xorvintroth and seal away the horrors residing within. Are you up to the challenge?
https://www.fantasygrounds.com/store/product.php?id=WOTC5EDDAL1009 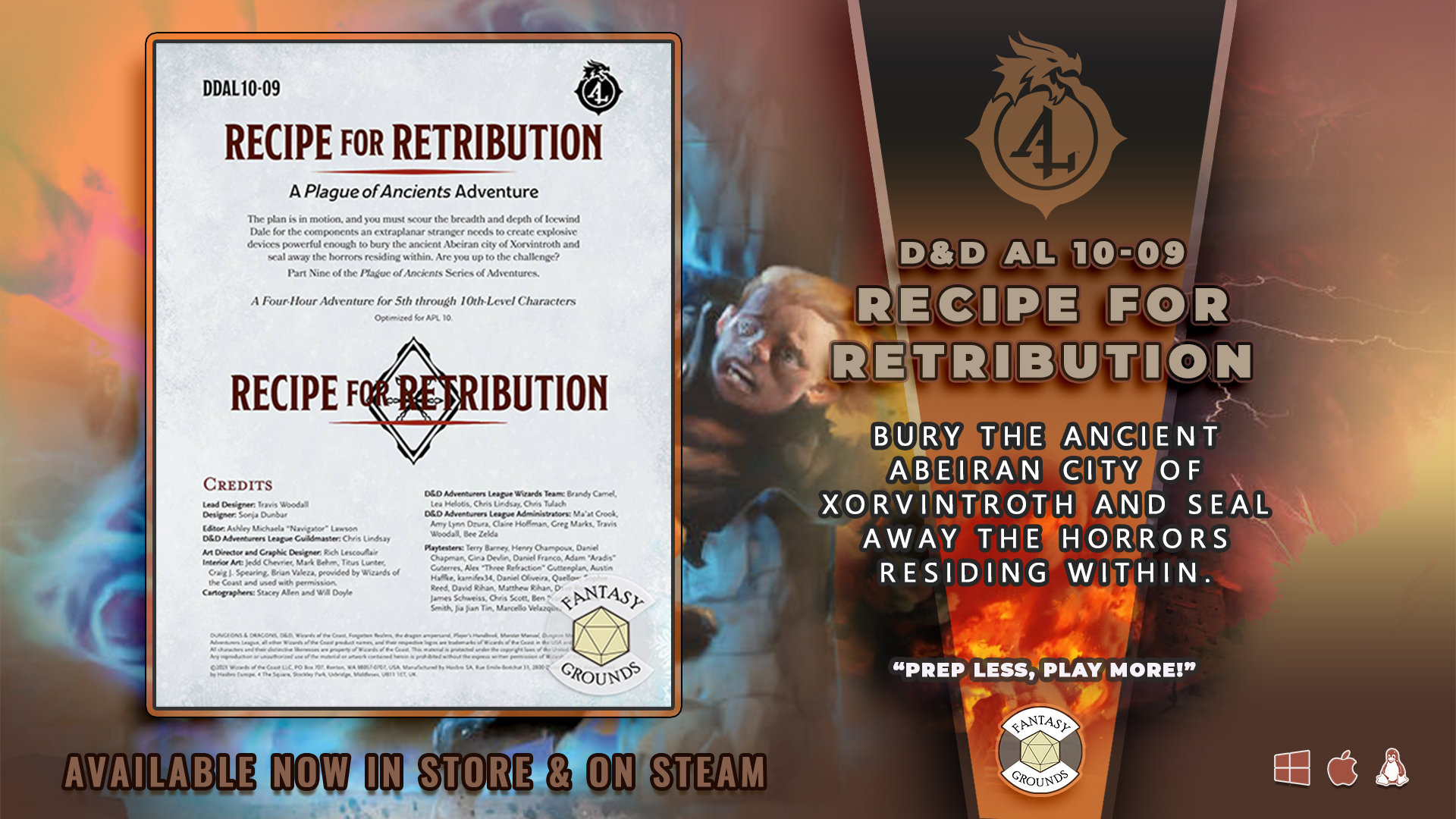 A Level 0 Adventure for MCC RPG
Younglings on their Rite of Passage are shocked to regain consciousness with no memory of how they came to be in a gigantic insect hive far to the north of their homelands, laboring as drone-slaves of the savage ant-men. In a land where an "insect revolution" has taken place, the PCs must contend with insectoid megafauna and a maze-like underground installation before facing the ominous Overmind: a building-sized insect queen cybernetically linked to an ancient chaotic AI. 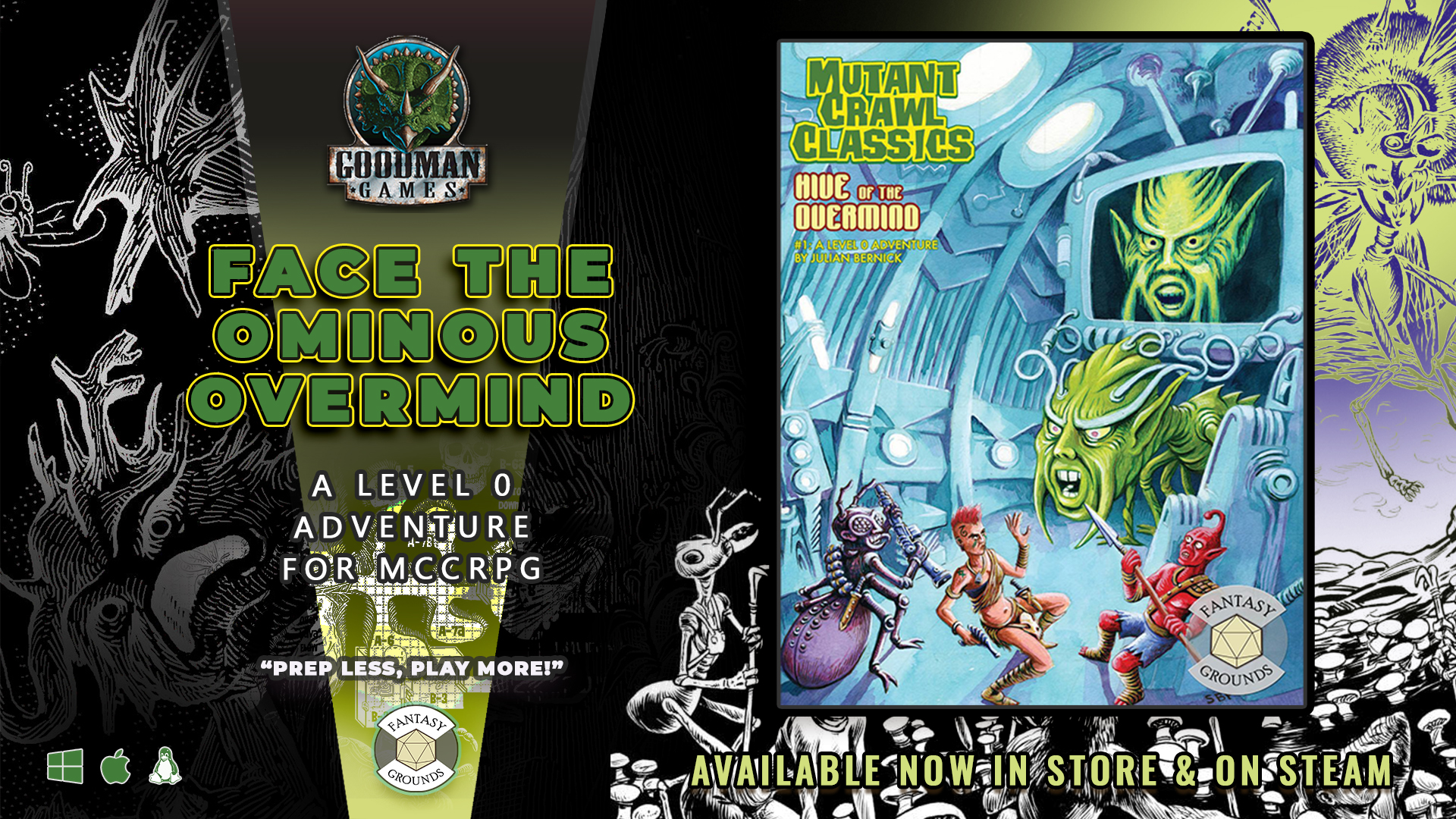 Answering a call for help from a neighboring group of settlers, the heroes embark on a rescue mission that takes them to a hidden jungle valley, where alien dinosaurs prowl among ancient elven ruins. The trail leads through a magical portal to an abandoned Azlanti base on the world's moon. There, survivors from a scouting mission gone awry huddle in the darkness, hiding from a terrifying, malevolent creature from another plane! "Whispers of the Eclipse" is a Starfinder Roleplaying Game adventure for four 5th-level characters by Kate Baker. This adventure continues the Horizons of the Vast Adventure Path, a six-part, bimonthly campaign, in which the heroes are at the forefront of exploring and charting a newly discovered world filled with mystery. This volume also includes a history of the diaspora of the elves, gear from an ancient spacefaring civilization, and a selection of diverse alien creatures. 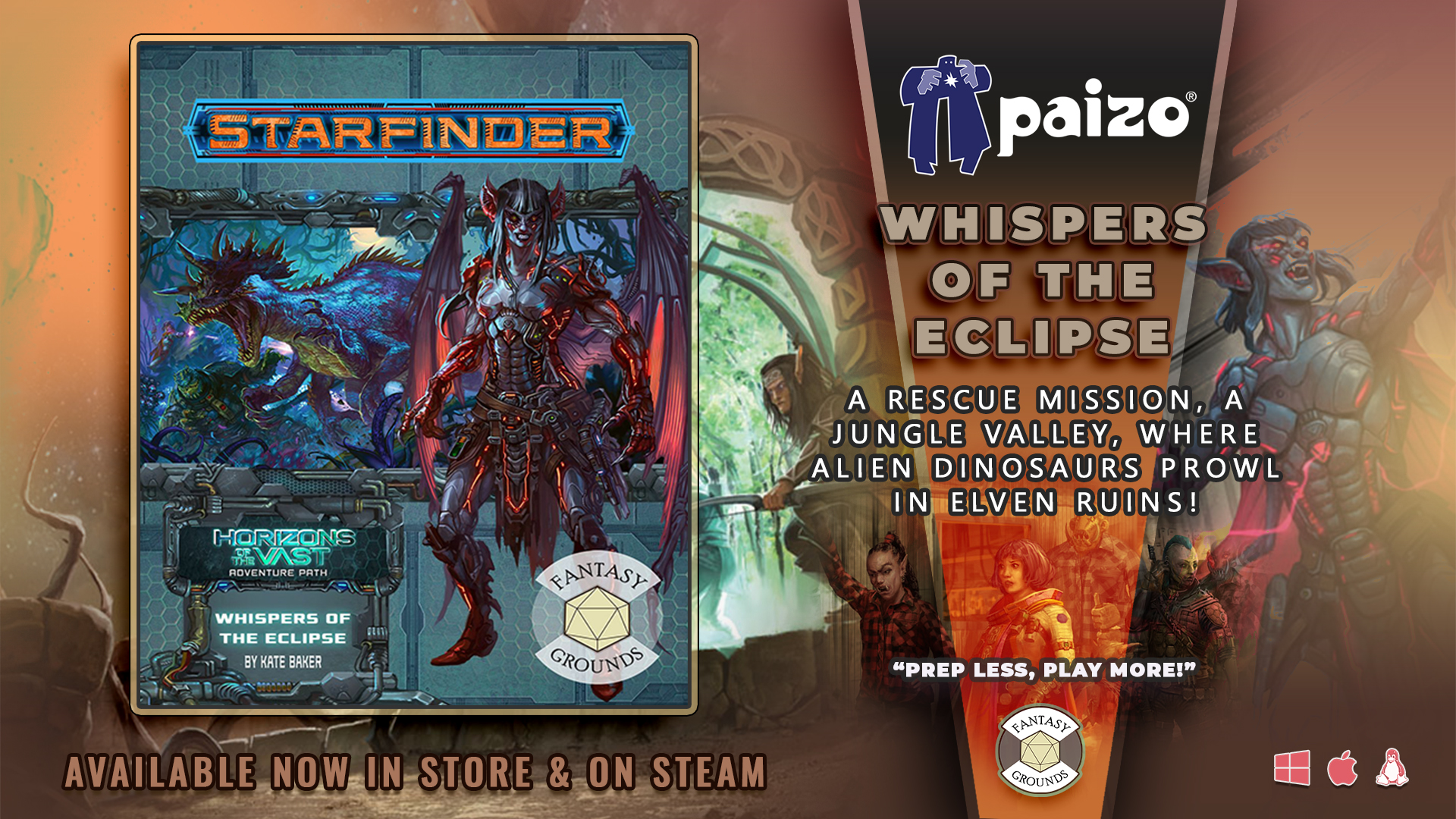 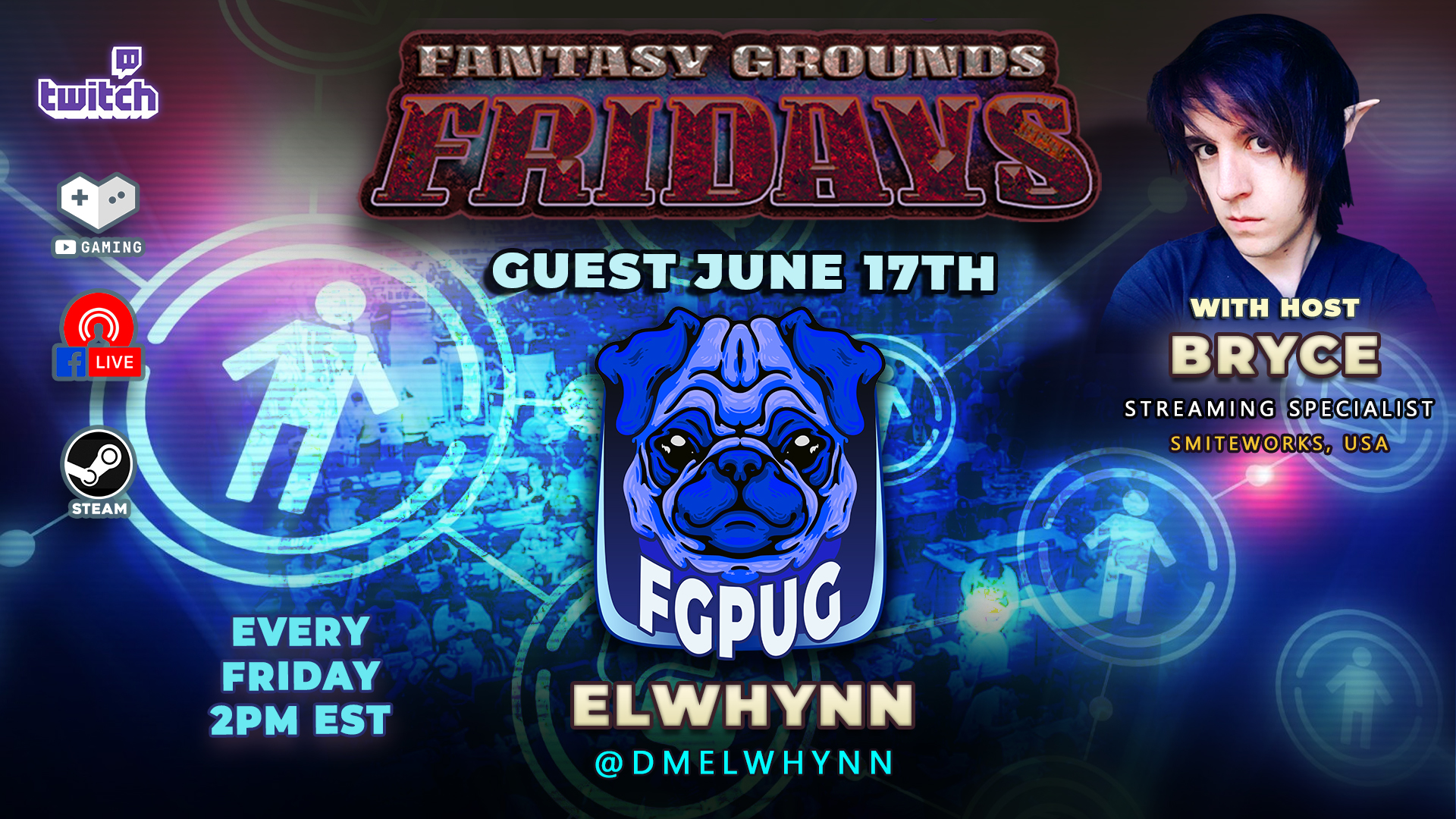 Dive deeply into creatures of legends!
Release the beasts! Heroes abound in the Age of Lost Omens, but for every great hero, there is an even greater monster.
Lost Omens Monsters of Myth provides details on 20 of the most infamous and terrifying monsters from the Inner Sea region and beyond.
Uncover the secrets of some of Golarion's greatest monsters from the Sandpoint Devil to Fafnheir, the Father of All Linnorms, and more.
Monsters of Myth provides rumors, tales, and even treasures for the brave adventurers willing to face these legendary creatures! 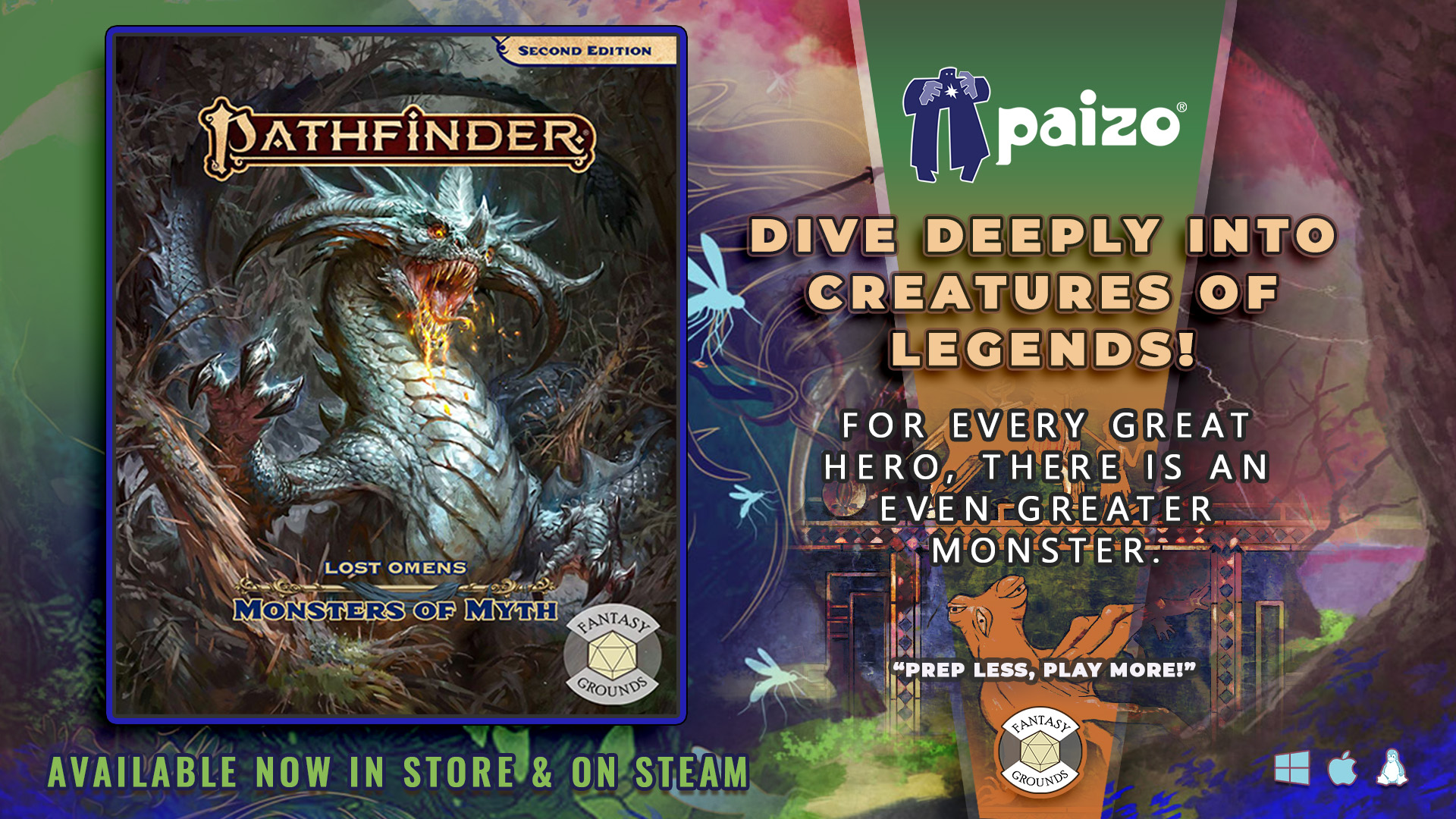 A Pathfinder Bounty designed for Level 3.
When the Fifth Mendevian Crusade ended, the hamlet of Bulviss was one of many casualties on the Mendevian side of the border. Overrun by demons and their allies, the hamlet hasn't been touched since a band of crusaders cleared out the demonic influence that lingered. Now, contracted by an interested party, a group of adventurers must head into the ruins of Bulviss to find a missing deed and any other surviving treasures. Have the demons truly been removed, or are there other, darker secrets waiting in the ruins? 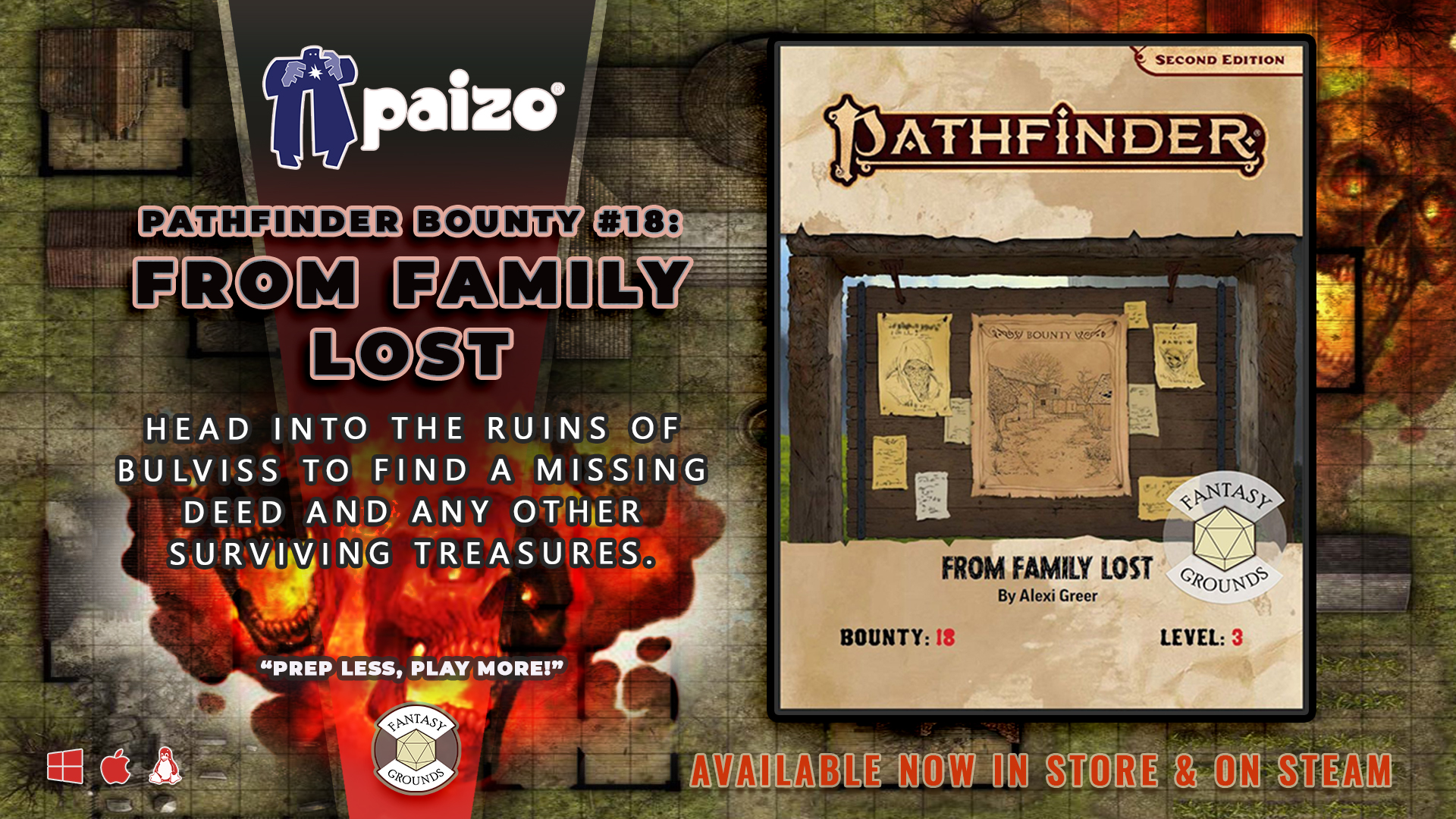