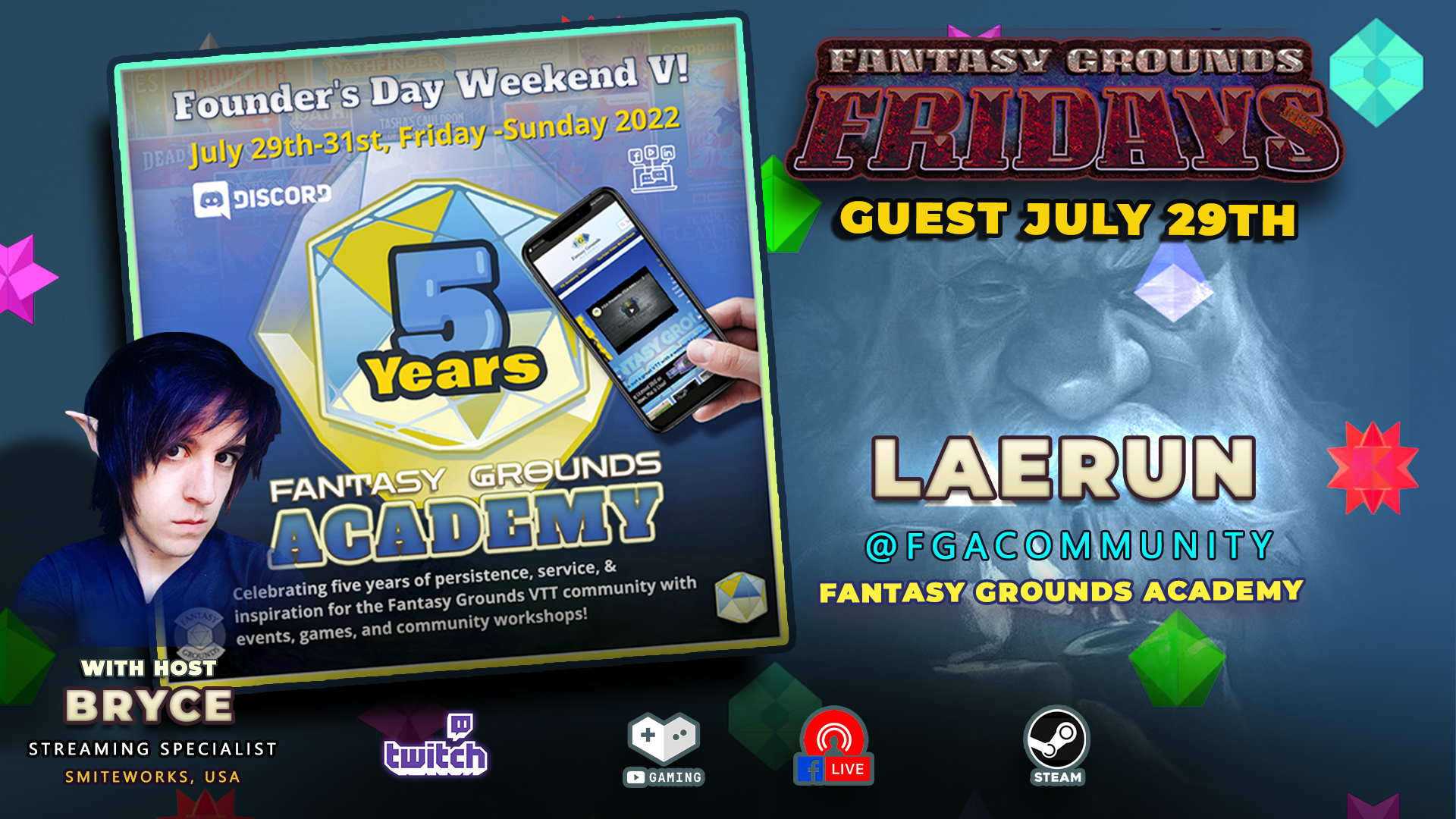 Dive into the Secrets of the Paranormal!

From the fringes, the unknown beckons. Pathfinder Dark Archive contains secrets that any player or GM can use to reveal the paranormal lurking in their Pathfinder games! This spine-tinglingly secretive product adapted from the 224-page hardcover rulebook presents two new character classes perfect for delving into the unexplained: Unleash the untold power of your mind as the psychic or leverage supernatural secrets and mystic implements as the thaumaturge! 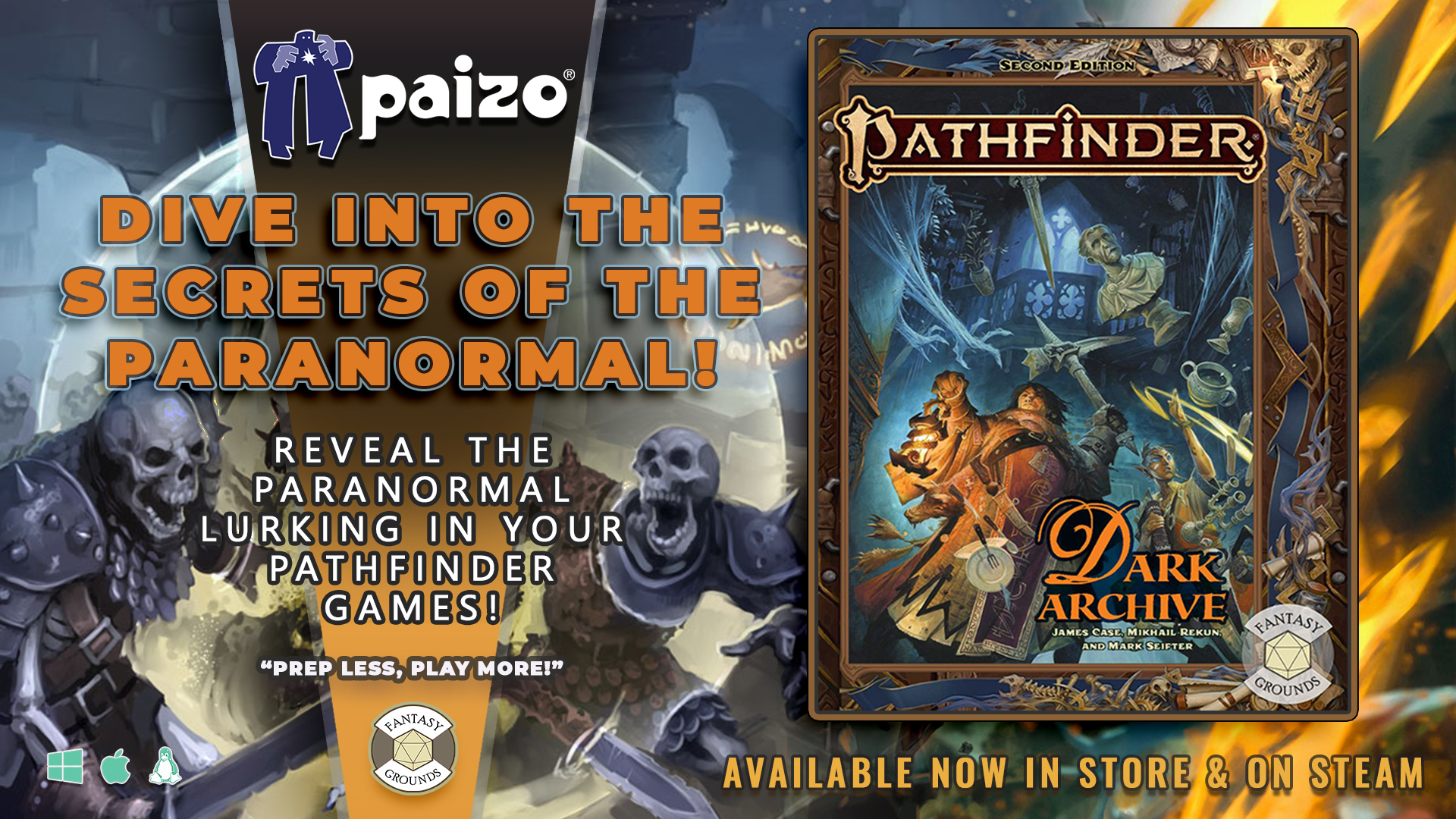 Something gnawing at you? The undead nation of Geb gains most of its international trade from the export of food grown on zombie-worked farms, but lately one farm has been the site of a series of strange occurrences. Dispatched to investigate the problem, the player characters discover a grave threat to Geb's minority living population, bringing them to the attention of the insidious Blood Lords who rule the land in the name of their undead wizard-king. Defeating the wicked forces behind the plot is the first step on a long road to gaining influence and power in Geb, but if the investigators can't solve the problem to the Blood Lords' satisfaction, their first step may be their last!

Zombie Feast is a Pathfinder adventure for four less-than-good-hearted 1st-level characters. The adventure begins the Blood Lords Adventure Path, a six-part, monthly campaign in which the characters rise from skilled troubleshooters to join the Blood Lords who rule a land of the dead. The adventure also details the Great Factions of Geb, whose favors are key to rising in political influence, and provides a complete gazetteer of the town of Graydirge, where the adventure takes place. New monsters, spells, undead companions, and more round out the bountiful buffet of "Zombie Feast"! 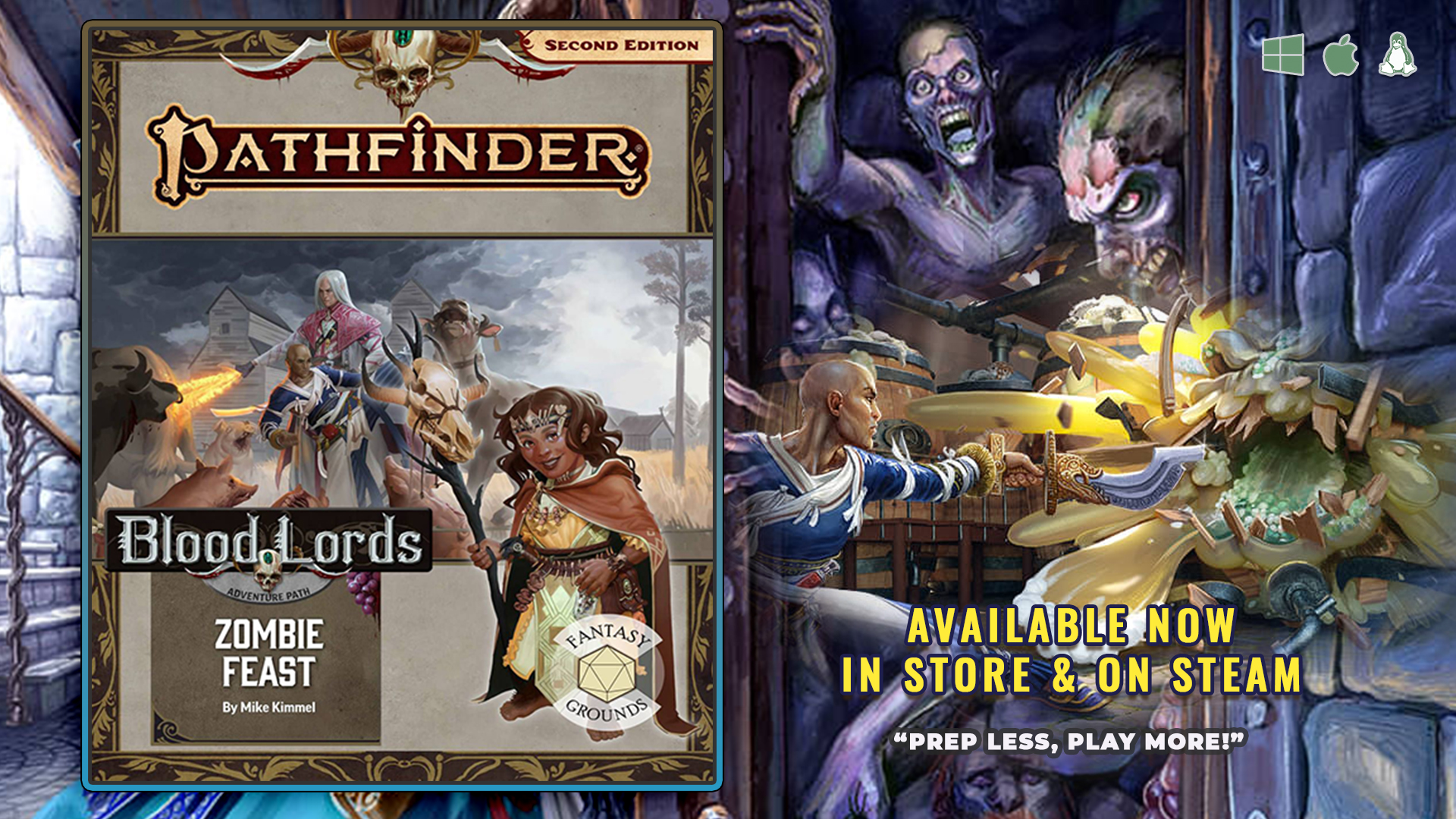 When the mysterious Gauntlight, an eerie landlocked lighthouse, glows with baleful light, the people of Otari know something terrible is beginning. The town's newest heroes must venture into the ruins around the lighthouse and delve the dungeon levels far beneath it to discover the evil the Gauntlight heralds. Hideous monsters, deadly traps, and mysterious ghosts all await the heroes who dare to enter the sprawling megadungeon called the Abomination Vaults! 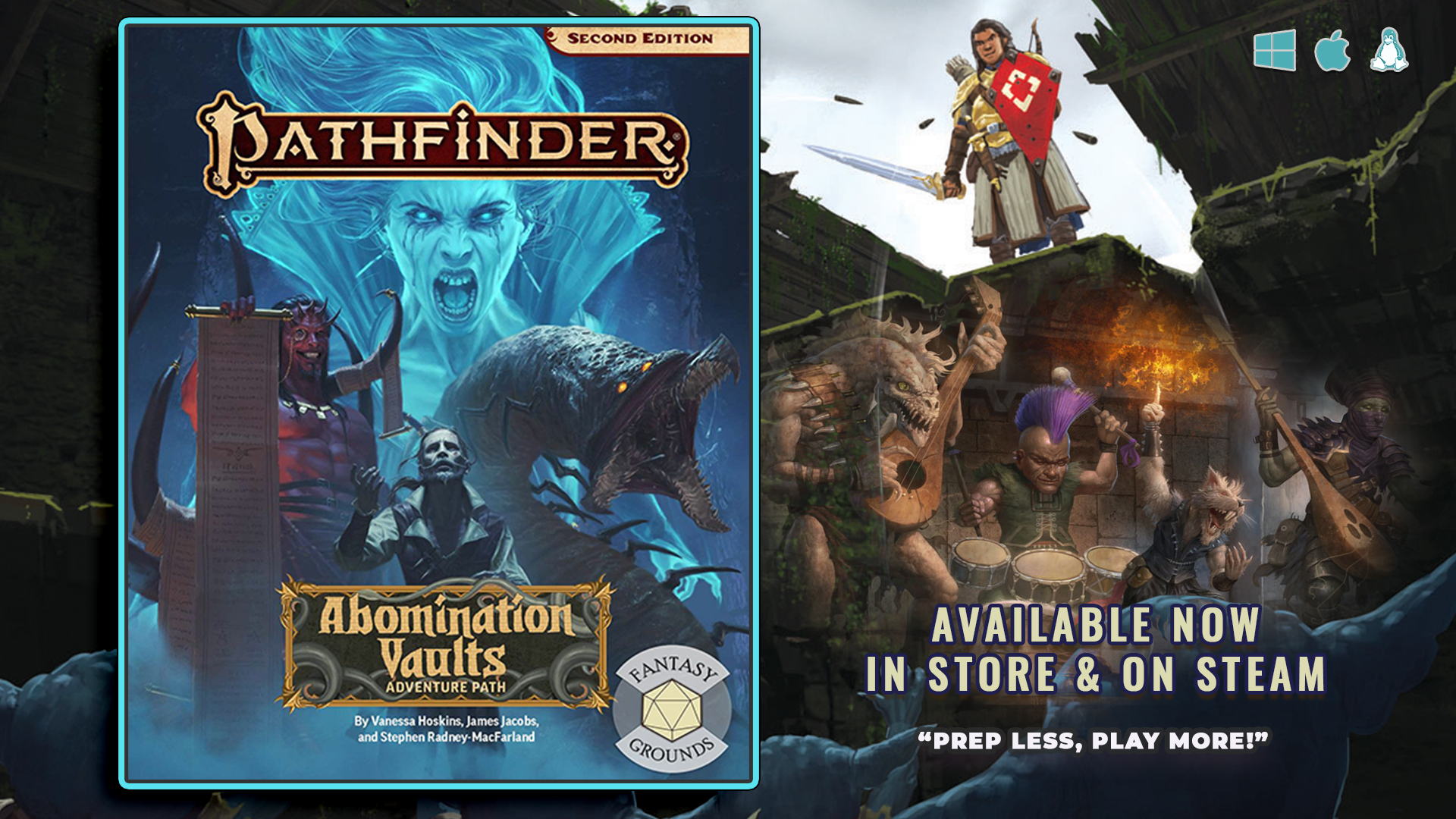 A Pathfinder Bounty designed for Level 1.

A citizen is in search of heroes! His parents recently found themselves swindled by a nefarious noble from distant Taldor. Needing adventurers to come in and assist, the man offers a hefty reward for any assistance that can be provided. Of course, not everything is as it appears on the mean streets of Absalom. 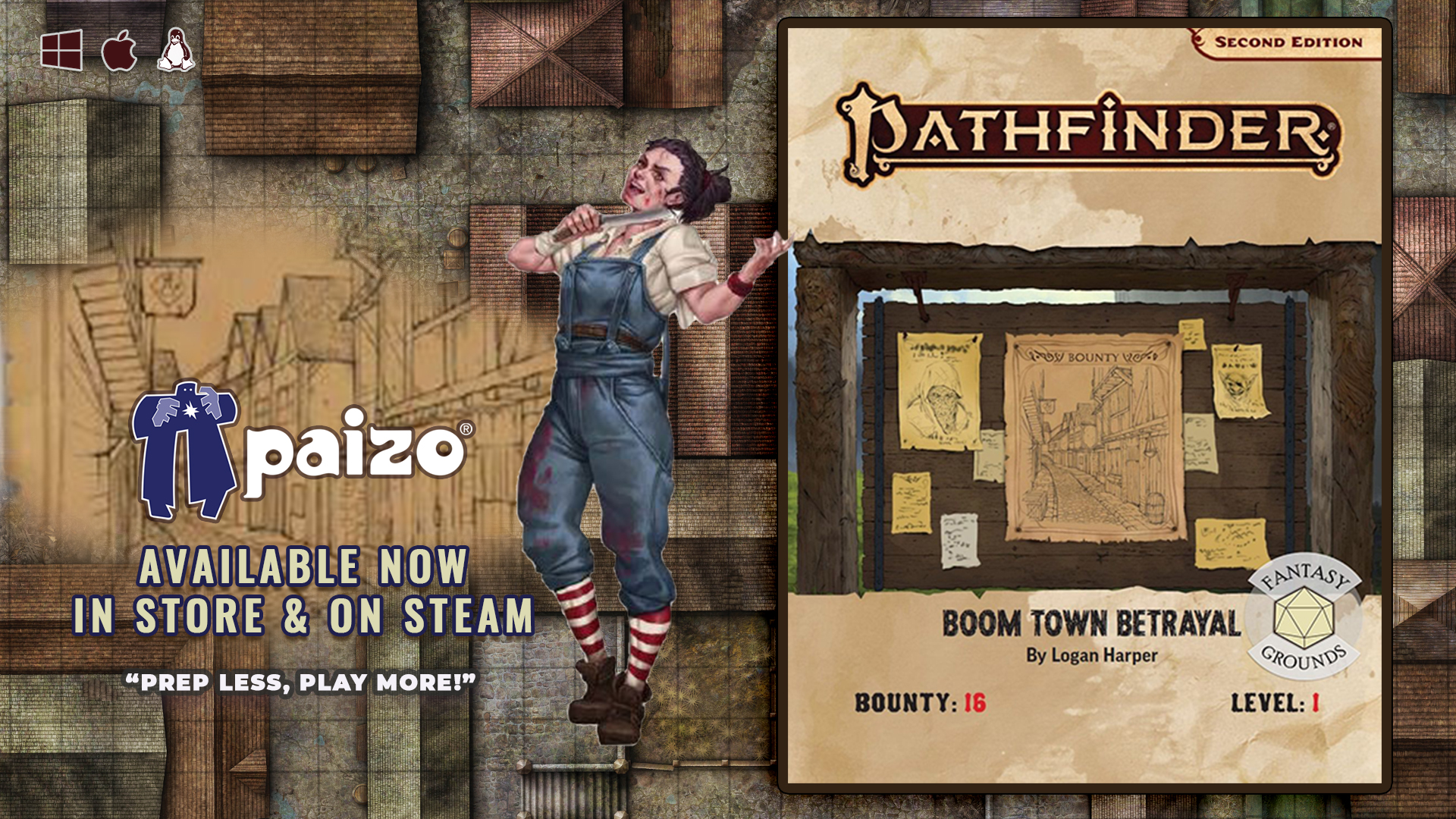 Friend or Foe Folio gives Game Masters 100 named non-player characters, each with beautiful art, lore, personality traits, and a 5E stat block. These NPCs can easily be dropped into any 5E game with no preparation, as their motivations are clearly detailed. In addition, each NPC has unique quest hooks - quickly expand your ongoing campaign with new adventures for your players! 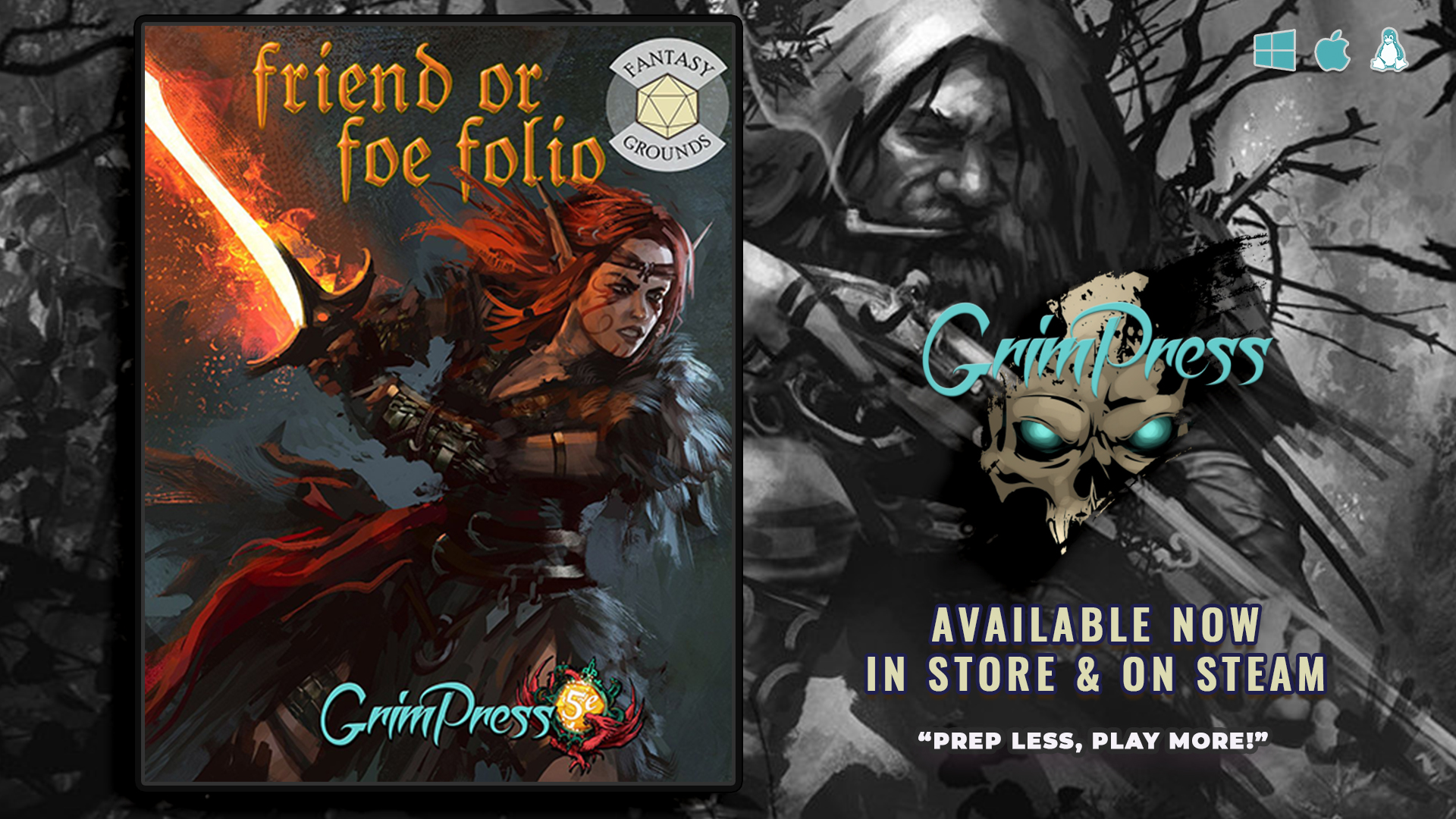 Enchiridion: Vaz'kin'rai is a collection of content for the 5th Edition of the world's most popular roleplaying game, expanding on the people, organizations, and themes of Vaz'kin'rai.
Though the Enchiridion is tied to the Vaz'kin'rai adventure, it serves as a standalone product and its contents can be slotted into any campaign, regardless of whether you've run, read, or even heard of Vaz'kin'rai before! The Starscape is home to many strange relics, peoples, and organizations. You need only open the way...

Vaz'kin'rai is a one-session adventure for the 5th Edition of the world's most popular roleplaying game, which sees 1st level heroes venture beneath the village of Dur to uncover the secrets of a mysterious cosmic vault. What will the heroes find within? And what price might they pay for uncovering it?
Go forth, and see what lurks within the vault of Vaz'kin'rai... 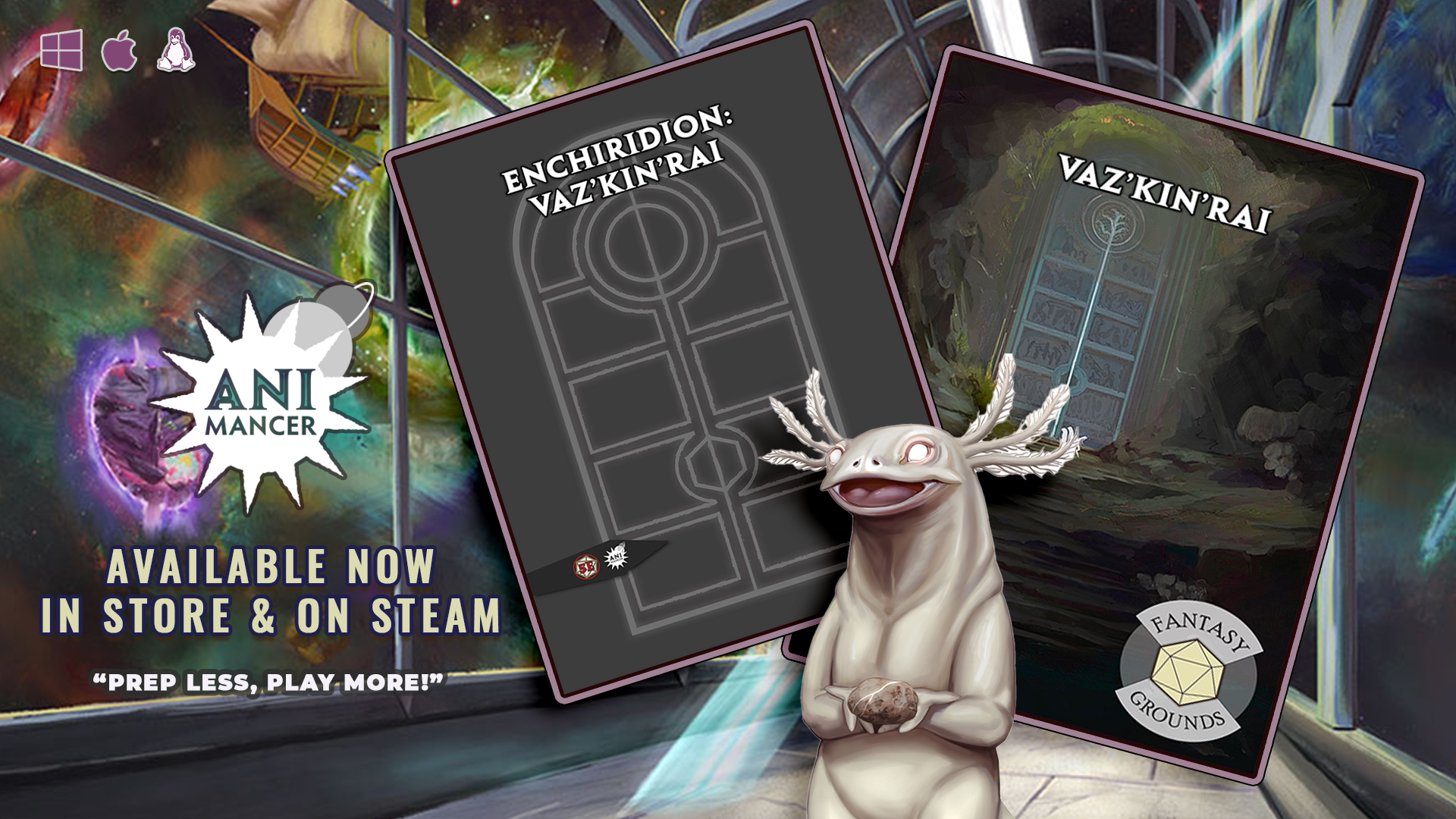 With these tiles, you can shape any tropical islands and their surroundings or inland within minutes. This set is for Fantasy Grounds Unity only, & contains reusable that have lines of sight predefined for ease of use. 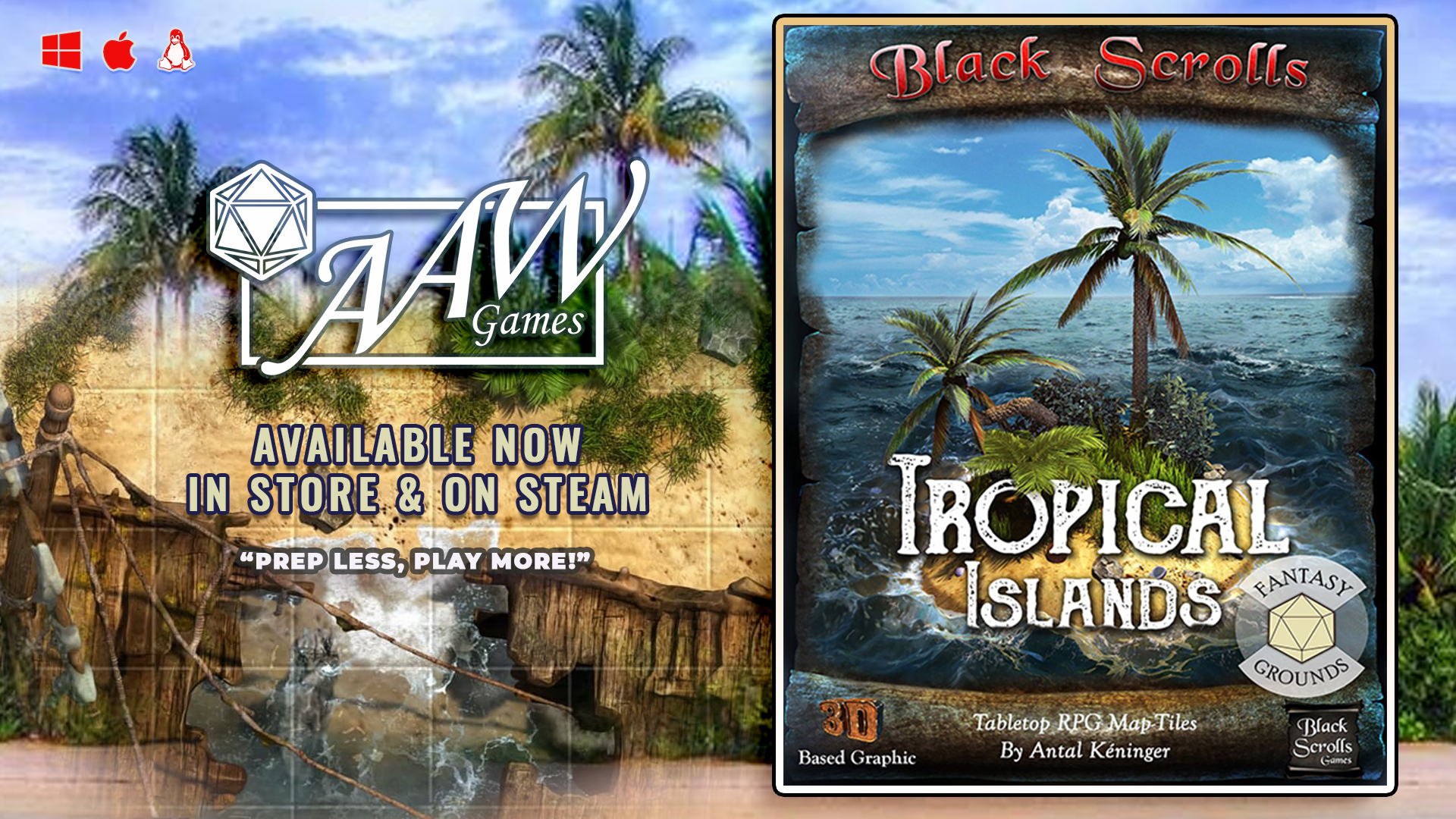 Mini-Dungeons are short, setting-agnostic adventures for 5th Edition which can be easily inserted anywhere in your campaign.
This bundle contains five such adventures. 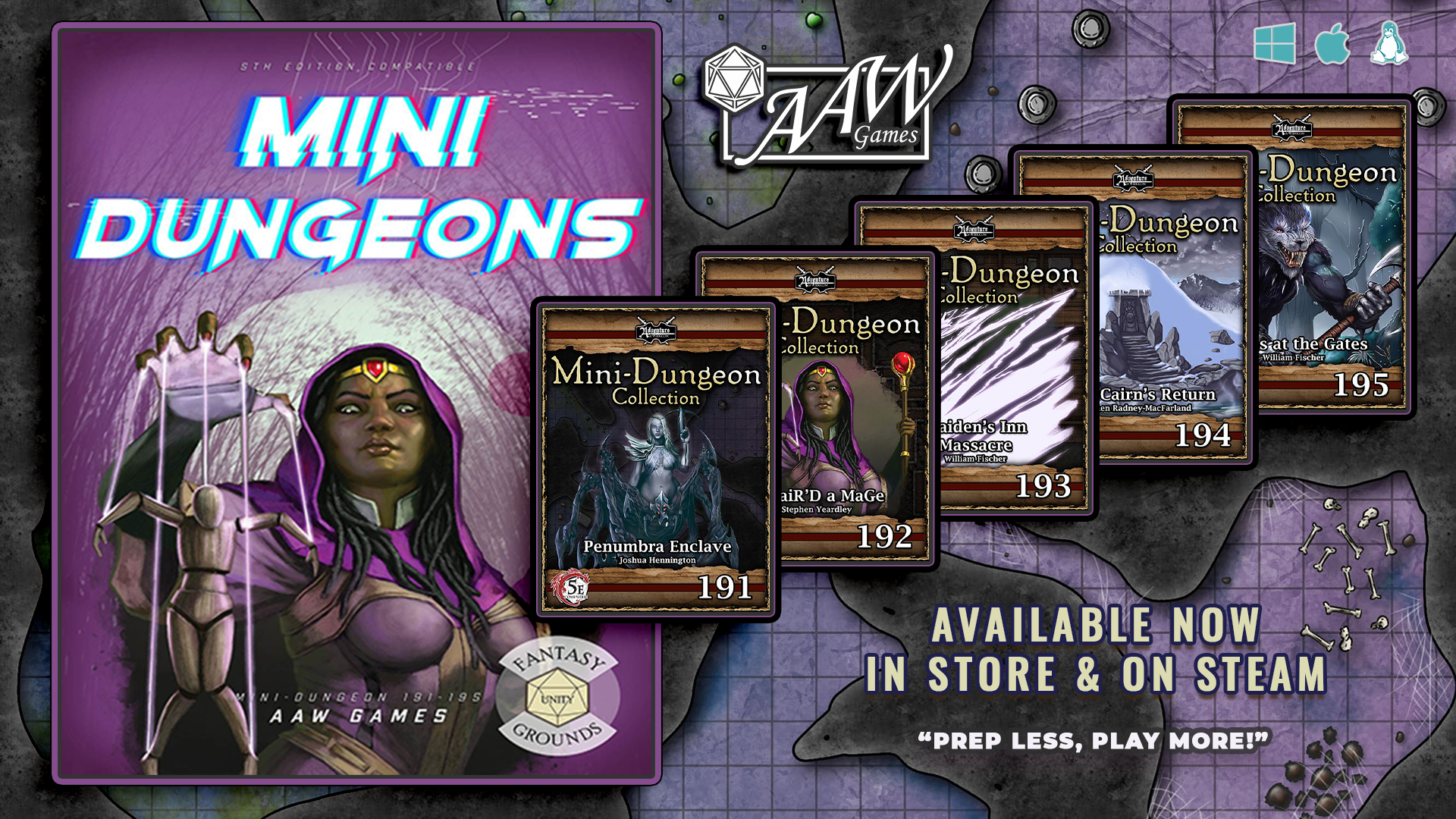 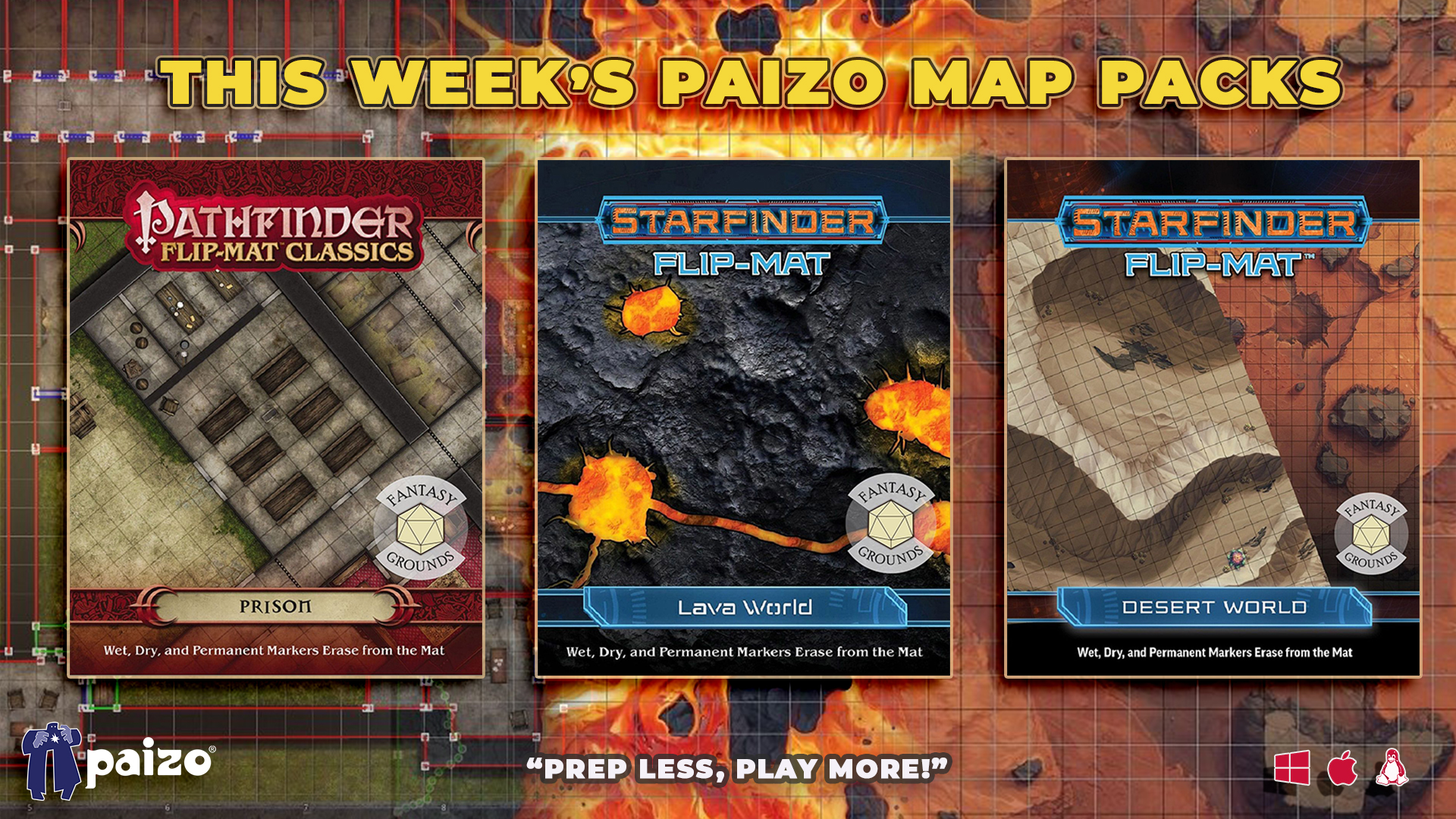 The hunt for the seven shards of the Shattered Star leads the heroes back to the western coast of Varisia, to the multifaith monastery known as Windsong Abbey. The next shard appears to be hidden somewhere within the dungeons below the abbey. But when the PCs arrive, they find the monastery in ruins and held by savage giants and twisted fey! An ancient terror has returned home, and now dwells within the levels beneath the monastery--a terror who hopes to open the dread doomsday door within! 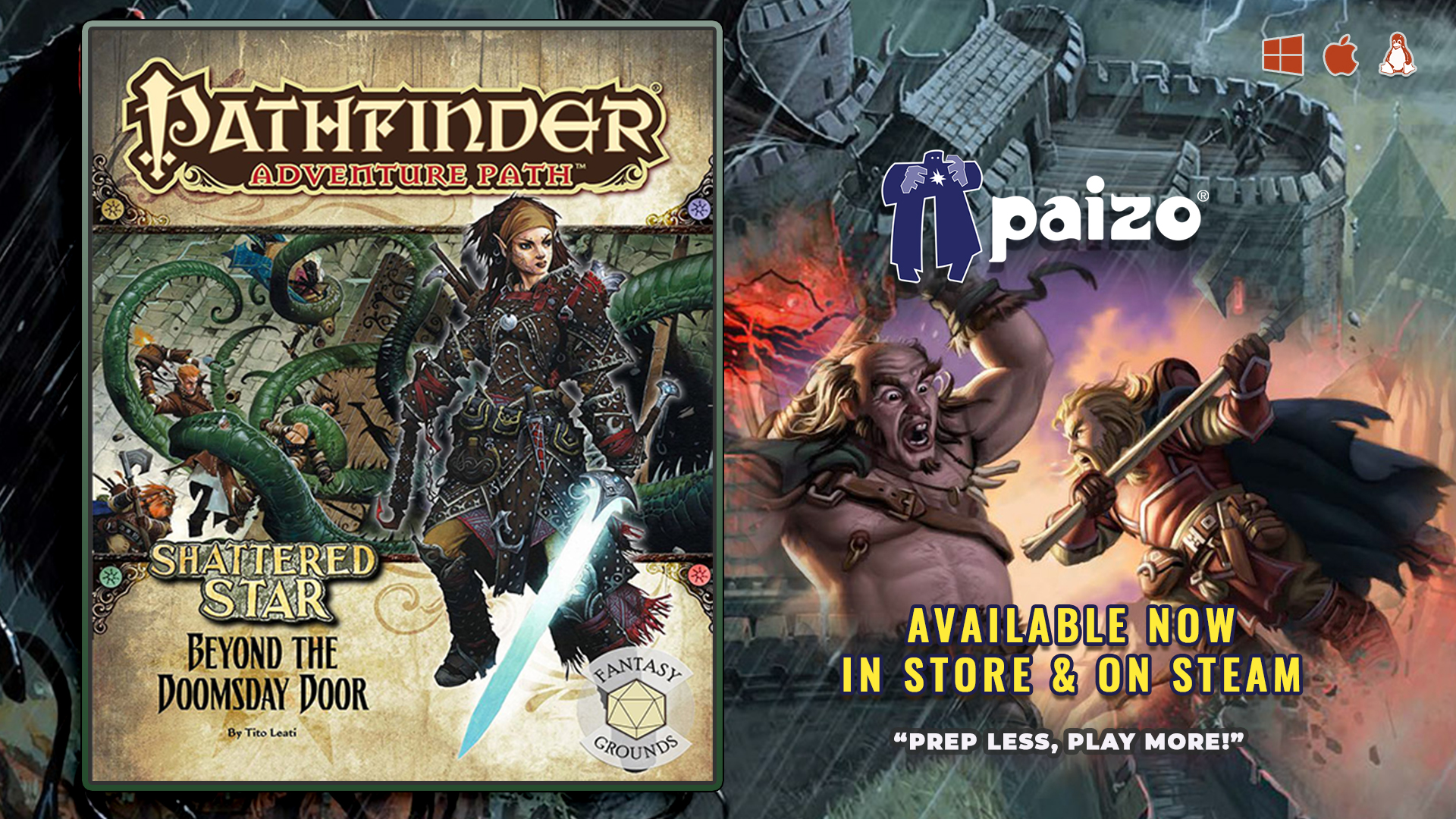 New Release
D&D Adventurers League EB-06 The Last Word
Wizards of the Coast
$4.99
D&D Adventurers League EB-06 The Last Word for Fantasy Grounds
Guided by prophecy, the adventurers seek out a spy operating in the heart of Wroat's Royal Court. The Oracle of War has linked him to a great turning point in Khorvaire's future, but he's embedded in deep cover and difficult to reach. Thankfully, every agent has a weak link, and love is blind.
A Four-Hour Adventure for Tier 2 Characters. Optimized for APL 6. 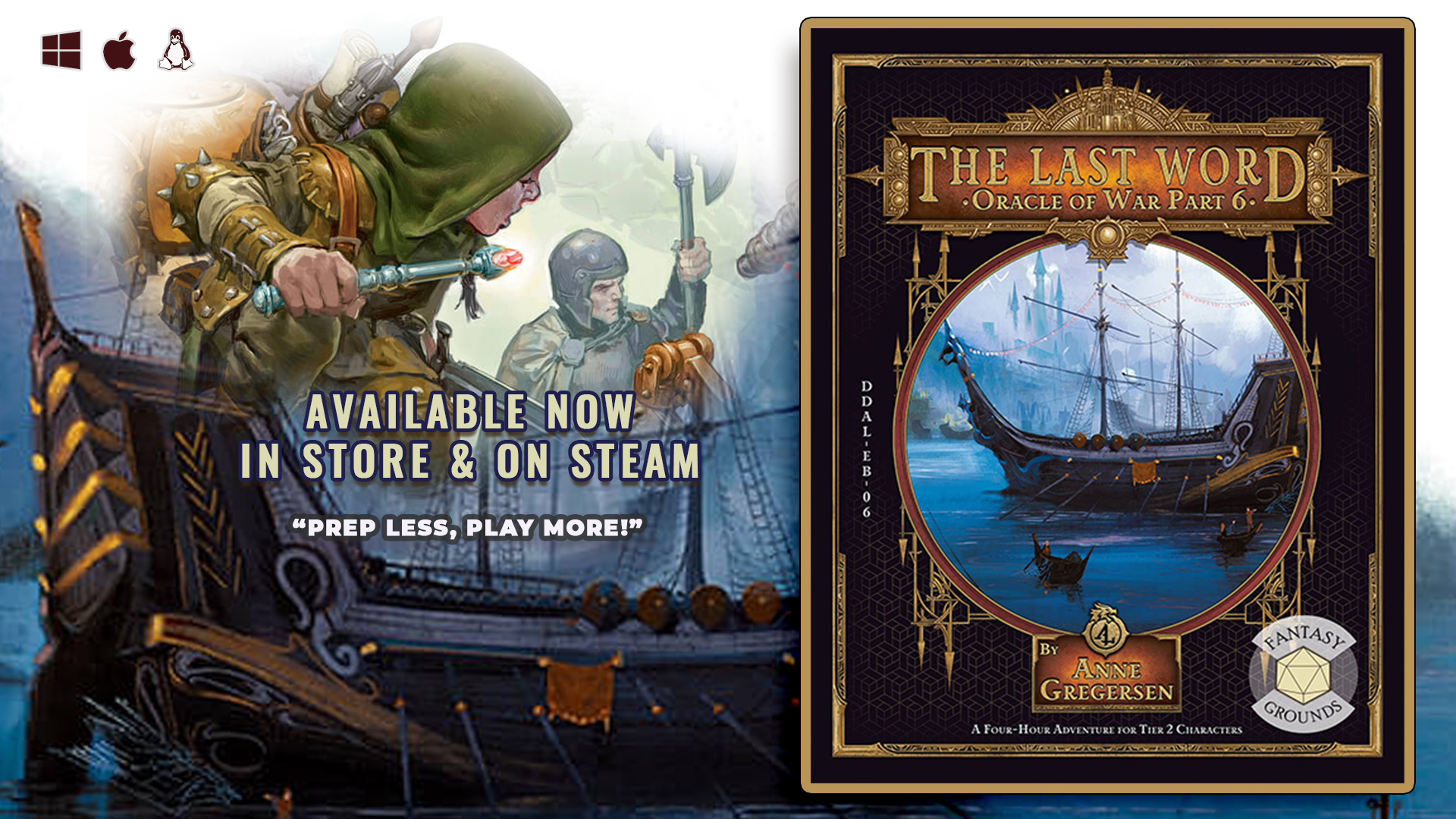 A Pathfinder Society Scenario designed for levels 1-4.
Dacilane Academy, located near the Grand Lodge, is a storied institution that sees to the education of many children of Pathfinders. However, the academy's benefactor, J Dacilane, has recently heard rumors from his students of seven strange phenomena manifesting on campus. Despite his doubts that these are simply the imaginings of students raised on Pathfinder tales, J has called in a favor with the Pathfinder Society to investigate--both to put his students' minds at ease and for the good learning opportunity a Society report about the school would provide. But are there more to these urban legends than meets the eye? 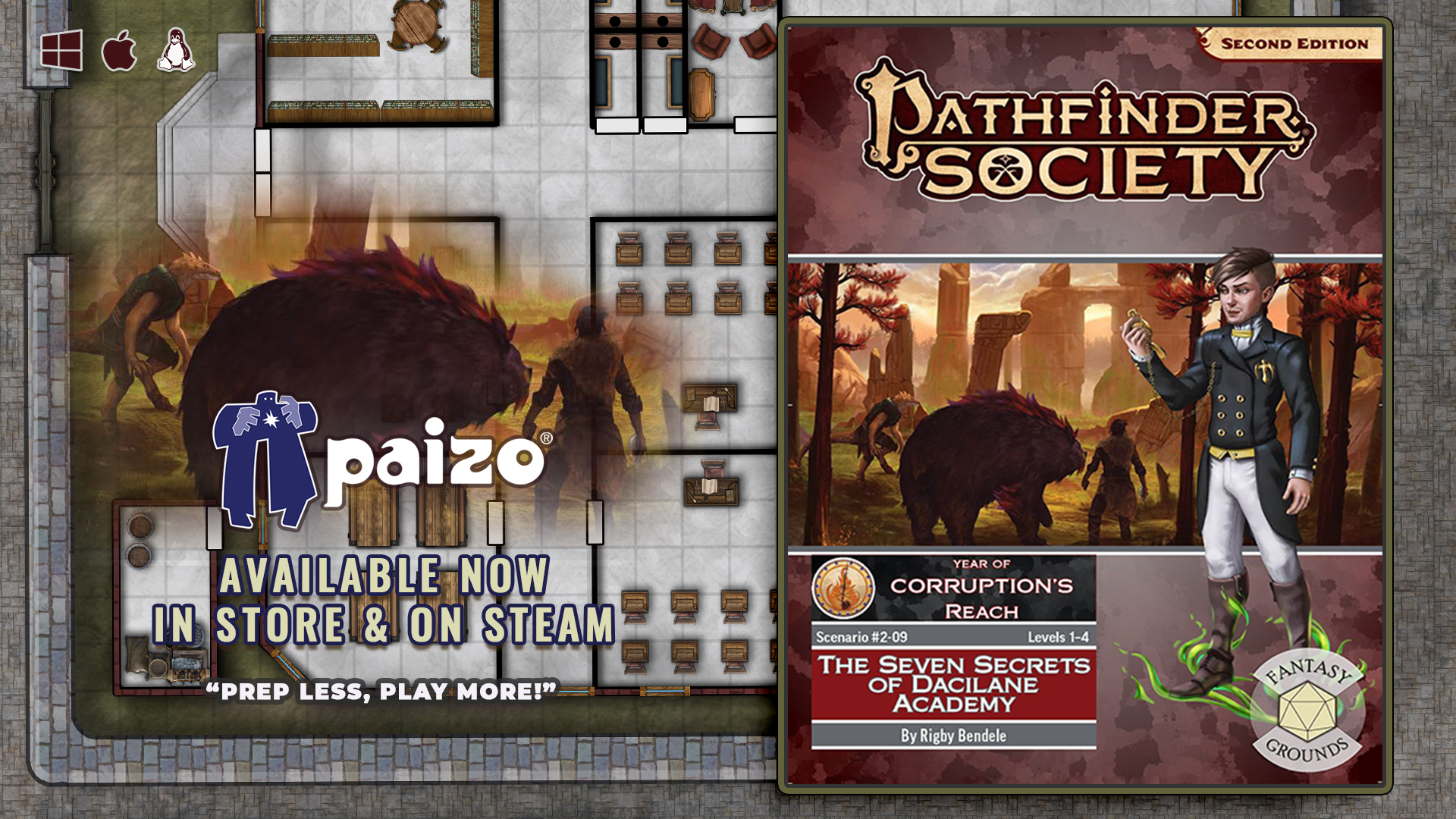 A Pathfinder Bounty designed for Level 1.
A former slave seeks to reclaim a life's worth of pay from her former captors. Luckily for her, a ship containing the misbegotten wealth of her masters is just off the coast of the city of Kintargo. A group of heroes steps in to assist and claim whatever goods remain on the wreck, but not everything is calm beneath the waves. 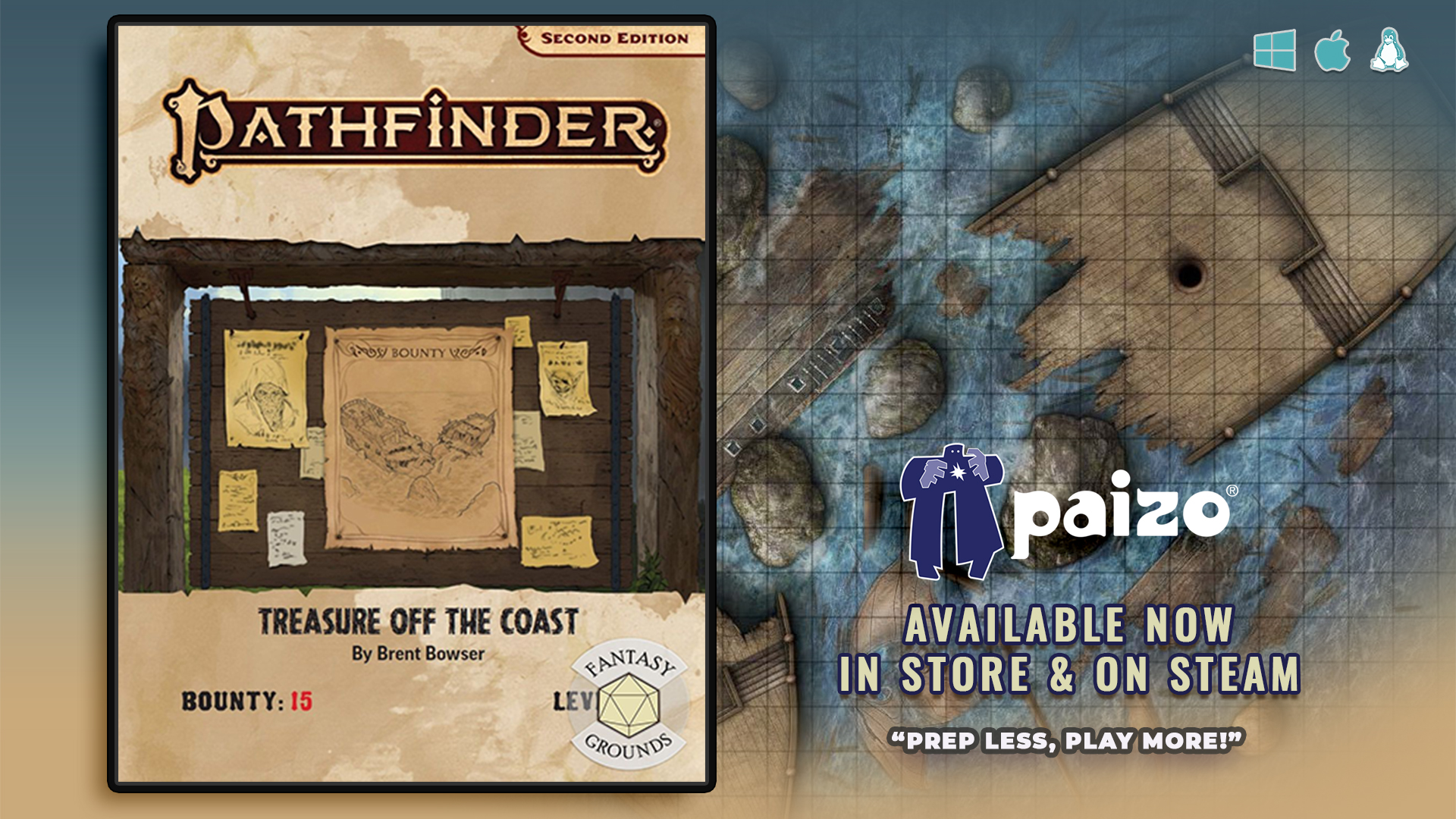 Welcome to ARCADIA! Inspired by old-school tabletop magazines, ARCADIA is MCDM's digital magazine for 5th edition GMs and players. We hope you like it! 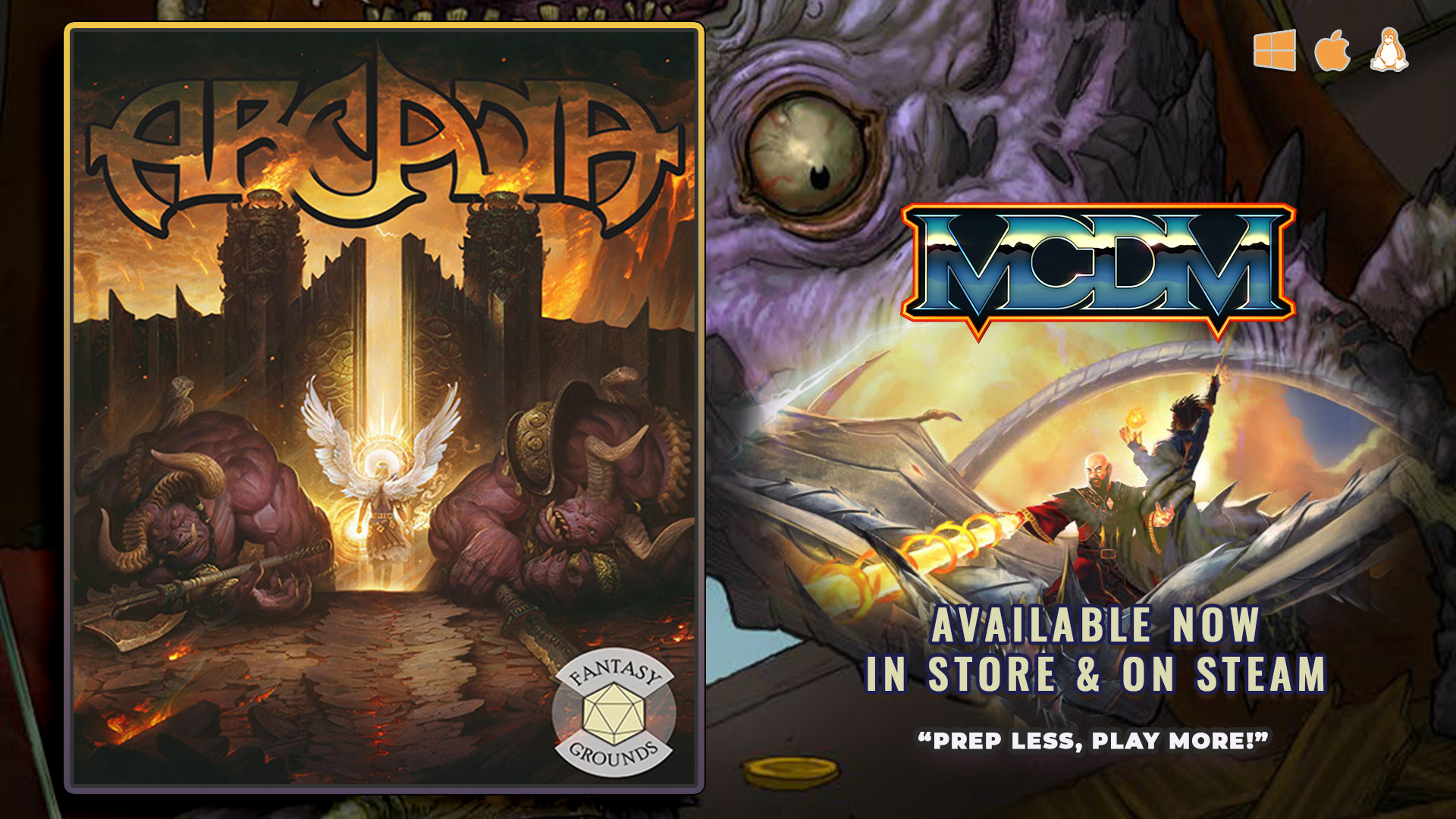 The time for battle is now! Monsters tumble out of the dark, wicked drow hatch vile plots, demons eager to invade the Material Plane clamor at the edges of reality, and bizarre aberrations pursue mad agendas that will plunge the world and all the planes into chaos. The people need champions to throw back the darkness, to take the fight to the dread enemies, and thwart their evil designs. While adventurers of all kinds answer the call to battle, from courageous fighters to cunning rogues, fell wizards, and wise clerics, they aren't the only ones capable of taking a brave stand. Joining them is a new breed of warrior: those brilliant tacticians and inspiring leaders known as warlords. These battle-hardened champions lead the charge into combat and through their insights, tricks, and stratagems, they enable all who fight at their sides to achieve their full potential to triumph in the face of any adversity.

Call to Arms: The Warlord returns a popular archetype from older editions of the world's most popular roleplaying game to the present. First and foremost a leader, warlords aid their allies through their design and implementation of brilliant combat plans. A welcome addition to any group, warlords can help turn the tide of battle, snatching ultimate victory from the jaws of certain defeat! 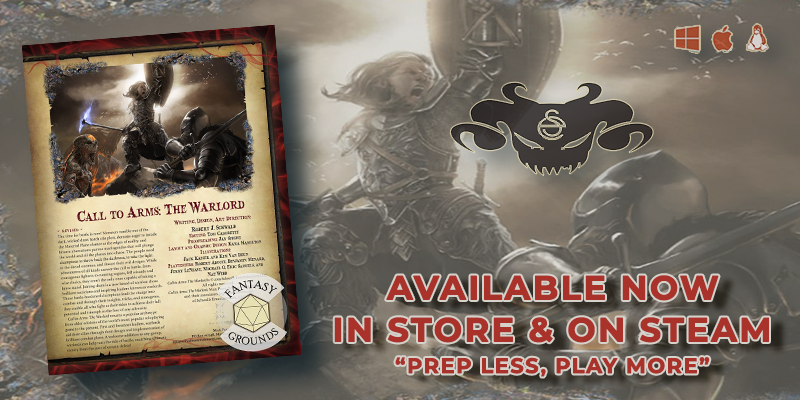 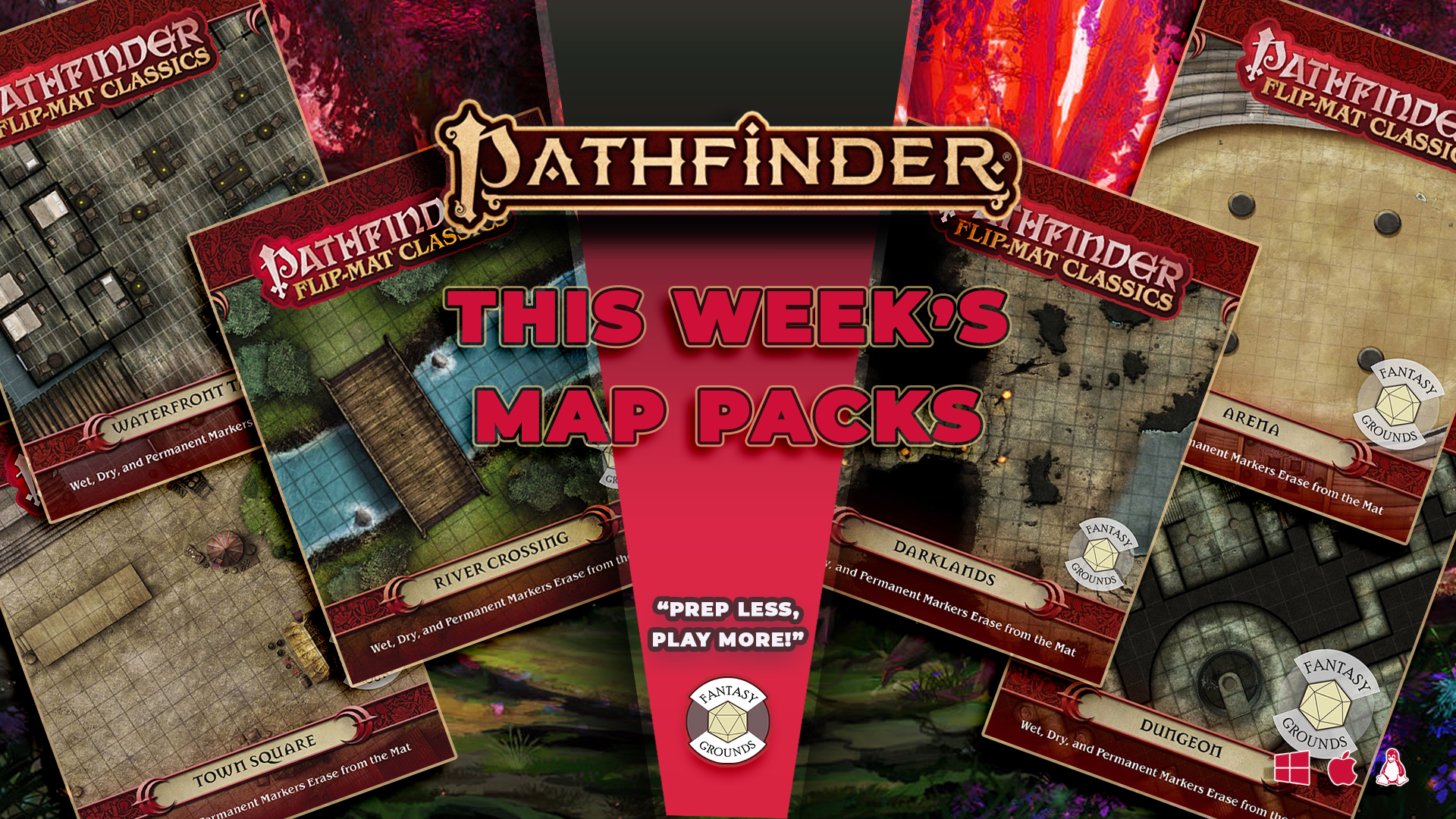 In case you missed the show.