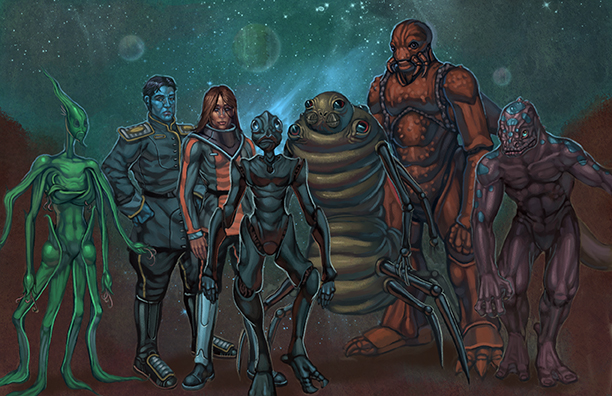 While we’re waiting to see what the final funding amount will be, we’re starting to talk about what new pieces of art we want commissioned first. Meanwhile, I’m also looking at the new additions to the playable alien species and deciding which ones will make the cut. It’s looking like the Angarri, Arnocht, and the Inar, all of which were featured in support products for the first edition. I do want to have two or three more, but not having their names start with a vowel, and moving away from anthropomorphic physiology are things I’m looking at.

In addition to those, the R’Tillek, who were the big villains of the first edition, will be moved from non-playable to playable, and the Gaieti are going to be more clearly defined (specifically, if you've looked at the issue of Blaster Bolts you get free when you back the Kickstarter, you should know that they are not plant people, but are actually beings of energy who inhabit a plant-based suit).

We’re also considering changes to the map of known space. The first edition map looked nice, but it wasn’t particularly helpful when it came to the most important thing: calculating travel times. I want to make sure that aspect is clarified so it’s not a point of confusion for people running the game.

And now we're in the final 24 hour stretch.