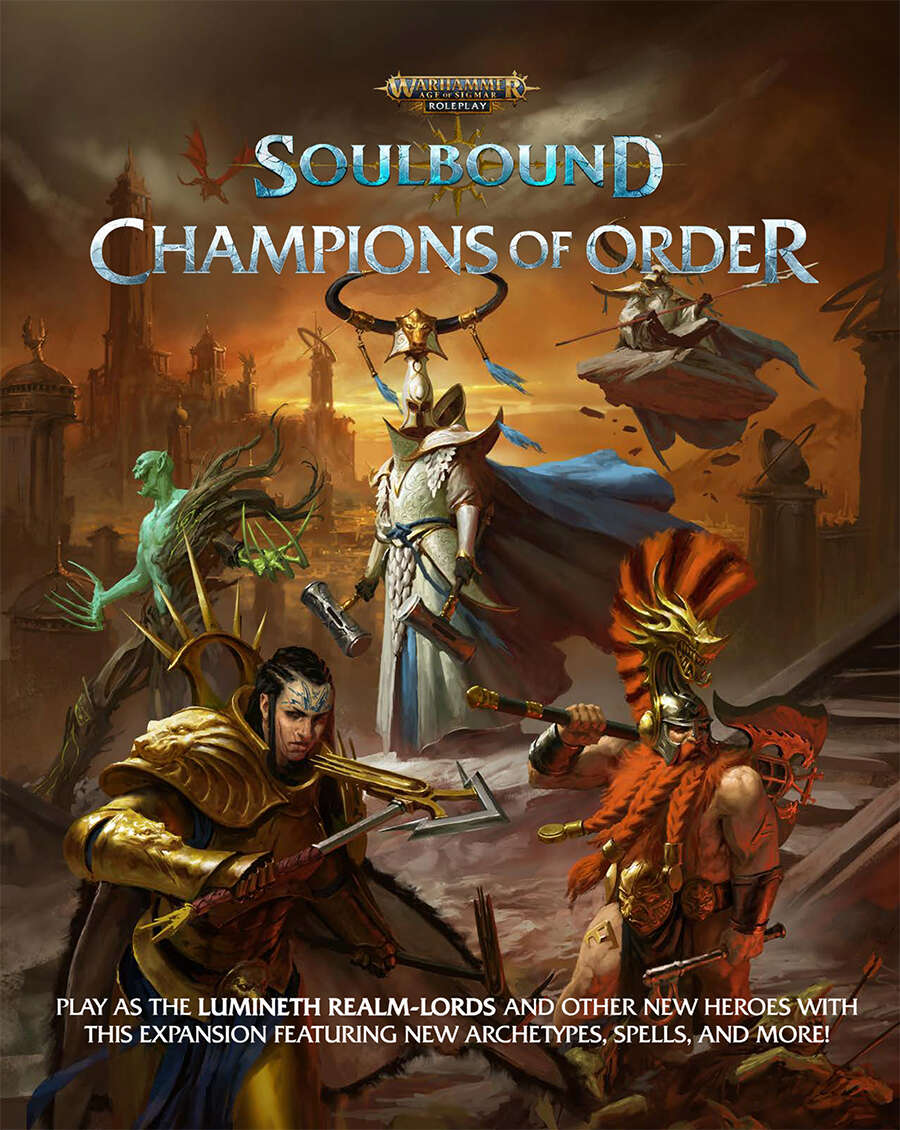 One of the true joys I’ve discovered over the past year is Warhammer: Age Of Sigmar: Soulbound. It’s the RPG adaptation of Games Workshop’s Warhammer setting. If you see Warhammer and immediately think of grim battles in a gloomy world, this setting will shock you. Instead, it’s a high fantasy hopepunk setting that feels more akin to Thor: Ragnarok than Witchfinder General. Chaos remains the big bad but it’s been pushed back by forces of Order, Death and Destruction that’s holding...for now. The RPG focused on Order in the core rulebook and the game’s first supplement expands the options for that broad faction in Champions of Order. Cubicle 7 provided me with a review copy, so let’s see what new options the (mostly) good guys have.

The big addition to the game are the Lumineth Realm-Lords as a playable character type. They are a riff on high elves (or Aelves as they are known in this game) that hail from the Realm of Light. They fell to Chaos because of the civil wars they started in the Age of Myth, a mistake they don’t look to repeat this time around. They use their aetherstone to absorb all their emotion to stay rational and even-headed even as battle rages around them. They get four archetypes in the book that reflect their warriors and magic-users. The most unique of these are the Scinari Cathallar who collect those used aetherstones to discharge negative emotions into safe places or into their enemies.

For the rest of the allied Order factions, the book provides subfactions for each. These sub factions connect with either a group or a location that gives your characters a bit more connection to the setting. It also helps diversify grounds that have multiple versions of the same character type. Choosing a subfaction also unlocks a new talent that your character gets for free. It seems like a no-brainer to use this book for extra cool things for players to do while also pointing them in the direction of learning more about the Mortal Realms.

The book expands the talent, gear and spell options for players. While there are the usual bonuses for specific skills and new ways to mess up enemies, it also continues to provide interesting mechanical and narrative options to choose. Old Enemy, for example, gives a player a bonus against a creature type that’s mortally wounded or killed them. Prophetic Dreams allows the player to roll on a chart and receive a dream from the GM that will steer them toward satisfying their goals. Soul Scarred allows a player to trade Wounds for extra Mettle in battle as their experiences push them to die gloriously in the name of Sigmar.

The mechanics section that continues to impress me are Endeavours. A lot of games have focused on “downtime” activities as of late, but the ones in Age of Sigmar feel epic. It’s not enough to go find a legendary weapon; you can take time to forge one yourself. This book offers more options that will give some great narrative springboards. A Grand Feast, refreshes the Soulfire of the group as everyone comes together for a relaxing, hearty meal. Desperate Measures reflects a character who knows their doom is coming and gets an advance on their XP at the cost of never gaining XP again. Endeavours in the core book are expanded. There are new choices for the Loyal Companion Talent, but someone must have seen some of the epic mounts that the characters in the miniatures game have. Players can now take measures to hunt, and tame larger beasts. Want your Fyreslayer to take a Magmadroth into battle? Now you can do that while the others improve their armor or carouse at the tavern. Endeavours offer interesting character choices that deepen backgrounds and personalities away from the high pitched battles of the main games.

Champions of Order is a fantastic expansion for players looking to deepen their journey into the Age of Sigmar. I can’t wait to see what the other faction books look like.

This review contains affiliate links. If you found these words useful, consider buying the game through the links to support your friendly local game reviewer.
Click to expand...