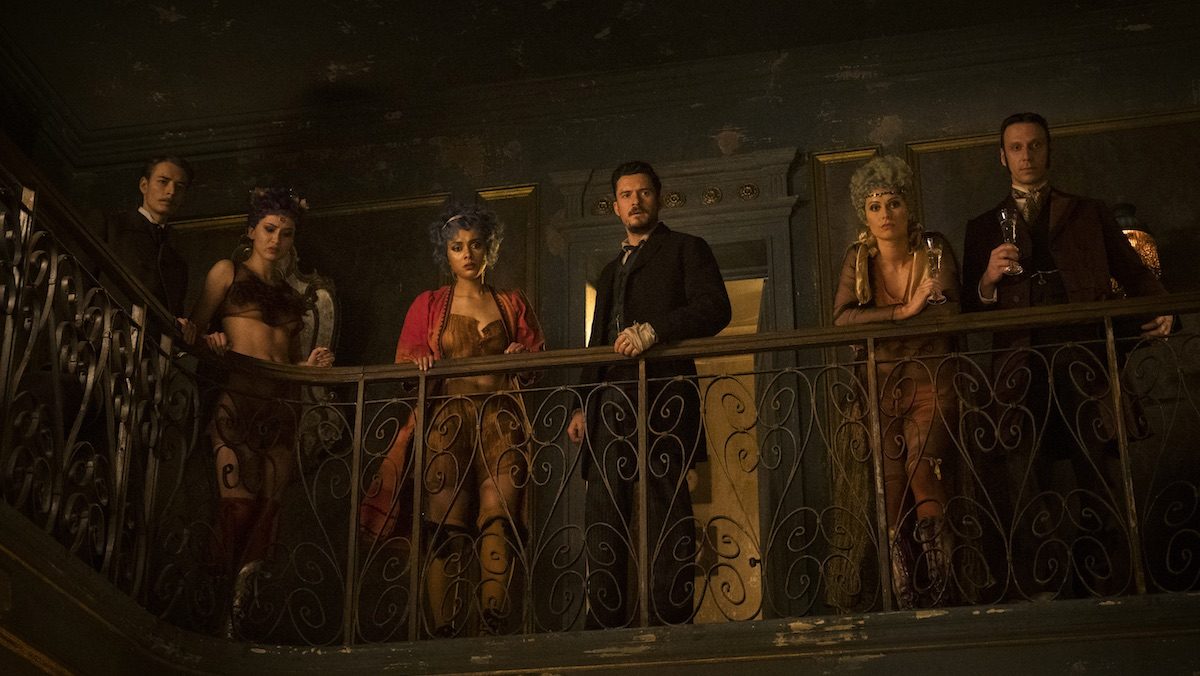 ​
It's a free 36-page PDF, and uses Monte Cook Games' Cypher System, and was written by screenwriter and Carnival Row creator Travis Beacham.

"Your favorite new TV show is now your favorite new tabletop role-playing game. Say hello to the official Carnival Row RPG and assemble your friends because we’re making the game available to everyone for free.

Nerdist teamed up with Monte Cook Games, Legendary Television, and Amazon Studios to develop an original RPG set in the universe of Carnival Row, which you can watch right now on Amazon Prime. Based on Monte Cook Games’ Cypher System, this sourcebook will allow you to tell tales of magic, mystery, and murders most foul with original characters of your own design, as well as familiar faces from the series. The RPG is incredibly accessible to tabletop gamers of all skill levels and offers a wide array of ways to create compelling narratives set within the wildly imaginative universe of Carnival Row.

You can download the game manual right now, but if you’d like to see how the Carnival Row RPG actually works, then you can watch this exclusive one-shot adventure run by series creator Travis Beacham. Starring Dan Casey, Erika Ishii, Aliza Pearl, and Amy Vorpahl as the characters they created in our amazing behind-the-scenes series Into Carnival Row, this raucous group of unlikely allies must race against time to recover a faerish relic before it falls into the wrong hands."
Last edited by a moderator: Sep 10, 2019
Click to expand...

Man, here I was hoping that Monte Cook had really gone next level and made a Steinbeck literary RPG.

There is a stream game for it with Erika Ishii. Haven’t checked it out yet.

Not gonna read the whole thing tonight, but it seems perfectly serviceable mechanically so far, like most things Cypher.

The sidebar on flight made me laugh, as such things do. Flight isn’t a big deal. Stop being afraid of it!

too bad it's not 5th edition, think i will pass

doctorbadwolf said:
The sidebar on flight made me laugh, as such things do. Flight isn’t a big deal. Stop being afraid of it!
Click to expand...

But how are people supposed to stab something with their sword if it doesn't stay politely on the ground in front of them?

Not only does it blow my mind that the showrunner and creator ran the one shot and wrote part of the supplement,* but also that the art is from props (read the book and keep an eye on the auction scene) and photos of the actors.

This publicity stunt was well planned, not a slap dash thing. Makes me wonder if Beacham kept his dream alive for 15 years by running a CR game.

*Eric C. Campbell did game design duties, so let's give him props on showing how flexible Cypher is.

dwayne said:
too bad it's not 5th edition, think i will pass
Click to expand...

Hey, it’s finally “cooling” down to a breezy 89 today where I am. Let’s keep the takes a reasonable temperature, shall we?


You forgot "my opinion" at the end of that statement. Personally I think both have strength and weaknesses that make it so I wouldn't care to run either long term. I play them off an on but as a GM neither fill the slots I want filled for a toolbox.

While I absolutely loved Carnival Row, and I thought about playing it, I would not use Cypher. My choices would probably be a modified Castle Falkenstein or Savage Worlds. Still, thank you for the free pdf laying out all the setting and characters!

This would be great if Carnival Row did not require me to be signed up for Amazon Prime.

Samurai said:
While I absolutely loved Carnival Row, and I thought about playing it, I would not use Cypher. My choices would probably be a modified Castle Falkenstein or Savage Worlds. Still, thank you for the free pdf laying out all the setting and characters!
Click to expand...


Carnival Row is primarily a drama, so maybe Robin Laws' drama system might be best?

D&D is absolutely not the right system. And agree, I wouldn't use Cypher either, but having a free game is neat, so shouldn't really be quibbling about system.

Carnival Row requires the Cypher system, so it's a setting not a game. It's mostly fluff, and well done fluff at that. Because of this, it could be easily used with any system you want, simply requiring translating some NPC stats to your system of choice.

But what if I needed and excuse to get the cypher system? Huh? What now?

But I'm glad others enjoy it and are excited about this product.

D&D is absolutely not the right system. And agree, I wouldn't use Cypher either, but having a free game is neat, so shouldn't really be quibbling about system.


D&D, any edition RAW, wouldn't be a fit but that's never stopped D&D fans or D&D companies from trying. And if you only skim the Cypher System Rulebook, it looks like it won't work. Dig deeper and you'll see that it's a better (not perfect) fit than you would think.

(For what we have seen in the show so far, Basic Role Play (d100) is a good fit, but it even needs a little mod here and there.)

But for leveling systems, the two main caveats would be that the game is a more fantastical version of the show and that a CR game would have to wrap up in the lower levels before the Burge ends up being run by PCs as witch-king emperors and super ninjas.

darjr said:
But what if I needed and excuse to get the cypher system? Huh? What now?
Click to expand...


Who needs an excuse to expand your game library? But there are almost no Cypher rules in this free supplement, you might want to check out some of the actual free game previews and read reviews first. I don't think it is a truly horrible system, but I've never actually found anyone near me who had played it or wanted to play it. For me, it is an idea resource to be mined for other games.

I only watched the first episode of the series and wasn't interested enough to continue. But I'm finding this setting pdf to be evocative enough that maybe I'll give the show another chance and watch a second episode.