Yes, it’s a terrible name for a convention.

The organizers will be the first to admit it. The name comes from the organizers’ name for their game space. That game space, much like the convention, is a hidden gem. It’s full of museum quality copies of D&D products throughout the nearly 50 years of the game’s existence. It’s also full of the things you might expect in a modern purpose built game space like a dedicated gaming table and a sound system. It sums up GameHole Con perfectly; mindful of the past with an eye to the future.

Growing up in Milwaukee, I never truly appreciated Gen Con until it left in 2003. I was able to roll out of bed, meet up with friends, and go to a massive convention at the heart of an industry without worrying about hotel rooms, travel arrangements or finding good places to eat. Yet I knew that the city never really embraced the show like Indianapolis. It pains me to be the one to tell folks that Gen Con is never coming back to Milwaukee. There have been other shows that have tried to fill the void but none of them have been successful. And here comes this show in Madison, a scant hour to the west, that does just that.

If anything GameHole Con started out resembling the one recent convention that’s flourished in the past few years in Wisconsin; Gary Con. There are still plenty of TSR Employees and die hard fans kicking around the cradle of RPGs. The nostalgic build of Fifth Edition brought the Wizards team back to Wisconsin in the spring with a second trip in the fall for Gamehole Con. It’s a small convention, but it’s one where you can see team members like Jeremy Crawford or Chris Perkins in the hallway and say hello.

The show has grown to include other companies as well, such as Monte Cook Games, Onyx Path, Chaosium, Beadle & Grimms and more. These are big players in the industry in a dealer room that still has space for small dice manufacturers and indie game developers. There isn;t the busy buzz of a Gen Con or an Origins, but it’s still easy to catch a seminar with influential people or even play a game run by one of them.

Streaming has also become an important part of the show. Without my experiences drinking on camera to raise money for sick kids, I would have never gotten the bug to start Theatre of the Mind Players. There’s a fantastic feeling of knowing that putting out RPG silliness helps people and I enjoy jumping into as many charity streams as I can at the show.

The key is the execution. Small shows tend to be chaotic affairs but as both an attendee and a guest GameHole Con puts other shows to shame. No sweating about tickets, clear communication of policies and an adorable John Kovalic monster every year. A perfect example of this happened this year. Madison has an indoor mask mandate this year due to COVID-19 and while other shows waivered in enforcement, GameHole Con stood firm. There was some drama on their social media because of it, but I felt safe at the show in a way I haven’t felt in nearly two years of going out in public.

GameHole Con returns to Madison October 20-23, 2022. If you are in the area at that time and want a big con feel with much less big con hassle, I hope you’ll join me next year.
Click to expand...

I am a game designer with over 15 years worth of game credits and industry experience. My work includes licensed games based on worlds like Star Wars, Star Trek and Firefly, classic game worlds like Dungeons & Dragons and Shadowrun and my own creations like Camelot Trigger and Save Game. I play a wide variety of games as part of Theatre of the Mind Players and have been the guest of honor at several conventions. I live with my family in Wisconsin, born near the heart of RPGs (and just a few short years younger than they are).
B

There is a real Midwestern predominance to these gaming cons, eh? Goes back to the beginning of the hobby I guess. I was flipping through old Dragons and realized how much the whole thing was originally a product of that milieu, like comic books and NYC. 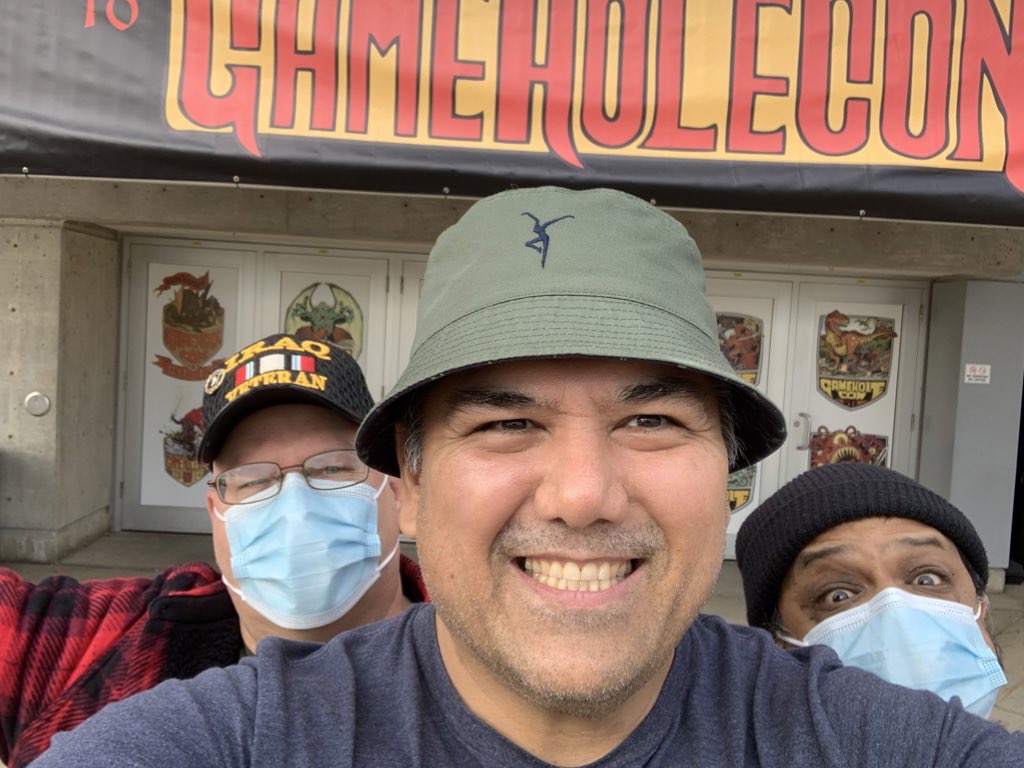 Gamehole Con is a very well run affair. And I get to sleep in my own bed each night making the 8 am to Midnight schedule I often keep for the con doable.

I saw that Mike Mearls had a fairly big presence there this year and people I talked to said he was not heckled or harassed, so that is a good thing.

Game Hole Con is definitely a convention I'd like to go to at some point in the next few years. I always read and hear good things about how it's run etc.

Blue Orange said:
There is a real Midwestern predominance to these gaming cons, eh? Goes back to the beginning of the hobby I guess. I was flipping through old Dragons and realized how much the whole thing was originally a product of that milieu, like comic books and NYC.
Click to expand...

Also, it has a cold winter, so people like to find things to do when the weather sucks.

Von Ether said:
Also, it has a cold winter, so people like to find things to do when the weather sucks.
Click to expand...

Objectively true. I grew up in Chicago. When the weather was particularly nasty, 2 feet of snow everywhere and 0 degrees, it was time for D&D. I remember carrying my 1st Edition AD&D bags through the snow to run a D&D game. I had a really bad cold and my mom wanted me to stay home. I told her, "Everyone is sick so it's no big deal." And that was that. The schools were closed down because of the cold weather and snow so we were playing D&D, homebrew and graph paper. I remember it like it was yesterday.

That was actually part of my theory--people would play a 10-hour game because they had long stretches when they were trapped indoors.

Ever notice how Greyhawk looks an awful lot like the Upper Midwest (the important parts are in the middle with lots of lakes), just like superheroes live in Gotham City (an old nickname for New York), Metropolis, and New York?

I haven't gone for the last couple. It was really great when the Clarion that is attached was open to attendees and the lobby would have free beer every night. I smoked a cigarette outside drunkenly blabbering at Peter Adkison there. It was pretty cool.

I've been to GHC twice, both while working with True Dungeon. I loved the con, but after the wife left, I stopped gaming and conning all together. I came back here recently because of a conversation with a person I met at a gig. When he found out about my gaming roots, it was questions, questions, questions and it made me realize I have a family I've been neglecting due to heartache and memories. I'm not financially stable enough to start the con circuit again, yet, but I hope to be, and this is one on my list.

As someone who's only missed one of these (the very first one, which I think had maybe 100 people...) I have to say I love it. I'm also a local, so if you're thinking of going and want some info, just ask. This is one of the best Con experiences around.

Looking Back at My Gaming Goals for 2022