We've been expecting it, after the cancellations of Origins, UK Games Expo, Essen Spiel, Paizocon, and others, but the last big tabletop gaming convention has finally announced that it will be cancelled for 2020.

The event will next take place in Indianapolis from August 5th-8th, 2021. The press release is below; Gen Con owner Pater Adkison talks about the decision here.

The ENnies have announced that the awards will be proceeding as planned, although live-streamed, hosted by Ken Hite and Robin Laws.


This will be the first time in the 50+ year history of Gen Con that we will miss the chance to see each other in person, and it hurts, but nothing is more important to us than the health and safety of our attendees and the communities they hail from.


To Our Gen Con Community:

It is with a heavy heart that we must announce the cancellation of Gen Con 2020 this August in Indianapolis. The safety and health of our attendees, exhibitors, and staff are of the utmost importance to us, and we cannot in good conscience host a gathering of thousands while doing so could threaten the health of so many.

Like you, we eagerly anticipate Gen Con every summer as a time of fun, connection, and celebration of our shared love of tabletop gaming and geek culture. We hope that the world will look different by August, but after closely following the development of the COVID-19 outbreak, having discussions with our partners in Indianapolis, and in keeping with guidance from the CDC, we can’t see a clear picture of how soon it will be safe for all of us to gather again. The only responsible choice is to cancel the convention this year.

We’re proud of being the largest and longest-running tabletop gaming convention in North America, but we are a small business run by a core team of 14 passionate individuals. To be candid, not having a convention is very tough for us, both emotionally and financially. The show in Indianapolis is our primary focus and source of revenue, and it’s your enthusiasm for gathering around tabletop gaming, as well as the passion and ingenuity of our sponsors, exhibitors, event team, and event organizers, that inspires us to make the show bigger and better every year.

In this regard, we could use your help: If you’ve already purchased your badge for Gen Con 2020 and are willing to roll it forward to Gen Con 2021, it will help us keep our staff employed through these unprecedented times and come back better than ever next year. If you’d like to pursue this option, you don’t have to do anything — we’ll convert your 2020 badge to a badge for 2021. However, if that’s not in your financial picture, we completely understand. Information about requesting a refund can be found here, and all badge holders will be contacted by email with detailed instructions. Additionally, if you’ve booked a hotel through our Housing Portal, your reservation will automatically be canceled without any fees.

All Pop-Up Gen Con events will also be canceled for 2020, and participating retailers will be contacted by email with instructions.

Going through the month of August without doing something to connect and play games together doesn’t seem right to us. During the original dates of the convention (July 30 – Aug 2), we’ll be hosting Gen Con Online, a virtual convention featuring a slate of events and programming you can attend from the safety of your devices and in the comfort of your favorite quarantine sweatpants!

Nothing can replace being at Gen Con in person, but we hope you’ll join us in donning our sweet Gen Con 2020 gear to play games and celebrate the things that bring us together. More details and announcements to follow soon! Sign up for our newsletter and follow us on social media for the latest updates.

Thank you from the bottom of our hearts for your support during this time. We hope that you and your circle of loved ones are safe and healthy! We look forward to seeing your wonderful faces in 2021!

Dang, well it’s for the best. I expected it but I’m still stunned.

I mean, this needed to happen, and I'm glad it did. I'm interested in seeing how things will work with GenCon online.

I assume they've worked out the cancellation with the venue in some way. I know that was an issue GaryCon had been worrying about before government-based restrictions went into place.

It had to happen, but trust the GenCon crew to be top dog, announcing after Essen Spiele cancelled and UK Games Expo already cancelled earlier. 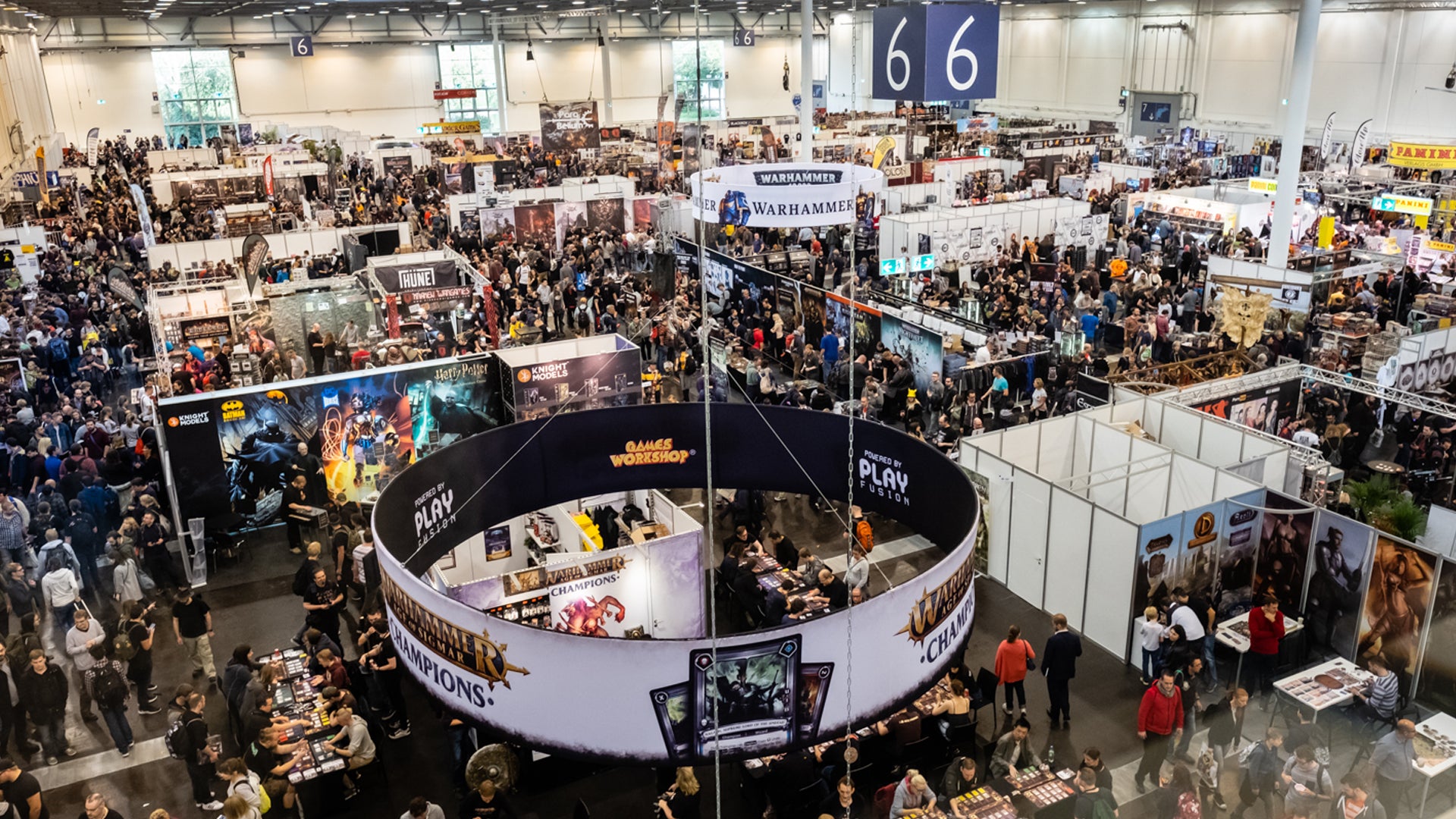 Morrus said:
We've been expecting it, after the cancellations of Origins, UK Games Expo, Essen Spiel, Paizocon, and others, but the last big tabletop gaming convention has finally announced that it will be cancelled for 2020.
Click to expand...

It's a sad thing to be sure, but I'm really glad this is the decision they went with.

Also, Morrus, I ninja'd you by two whole minutes, and yet you put your own article on the front page. I call corrupt practices!

A large chunk of the gaming crowd is in that high risk group so not surprised.

They made the right choice.

Here is the message from Peter Adkinson, the head honcho in charge on the cancellation of GenCon 2020. 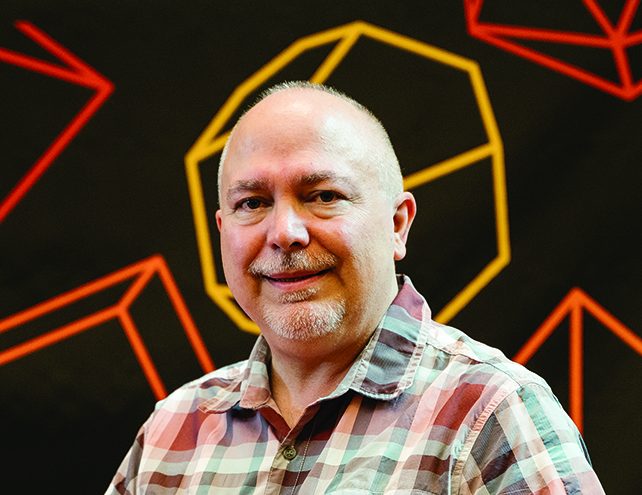 A Message from Peter Adkison – The Official Gen Con Blog

Gen Con’s Co-Owner and Chairperson of the Board on the Cancellation of Gen Con 2020 This decision will not be surprising to many of you, but due to health and safety concerns related to COVID-19, we announced today that we are canceling Gen Con 2020 in Indianapolis and planning an online event...

imagineGod said:
Here is the message from Peter Adkinson, the head honcho in charge on the cancellation of GenCon 2020.
Click to expand...

Was my link inadequate in some way?

Wow expected but many game companies depend on GenCon push for their new releases, I expect a snowball roll down from here, I hope they can survive.

Edit: At least we get GenCon Online which can give promotion to new products. I liked Virtual GaryCon back in March, I wonder how they will handle something of the magnitude of GenCon though.

The plan seems to be for GenCon2020 Online instead from July 30 to August 2. 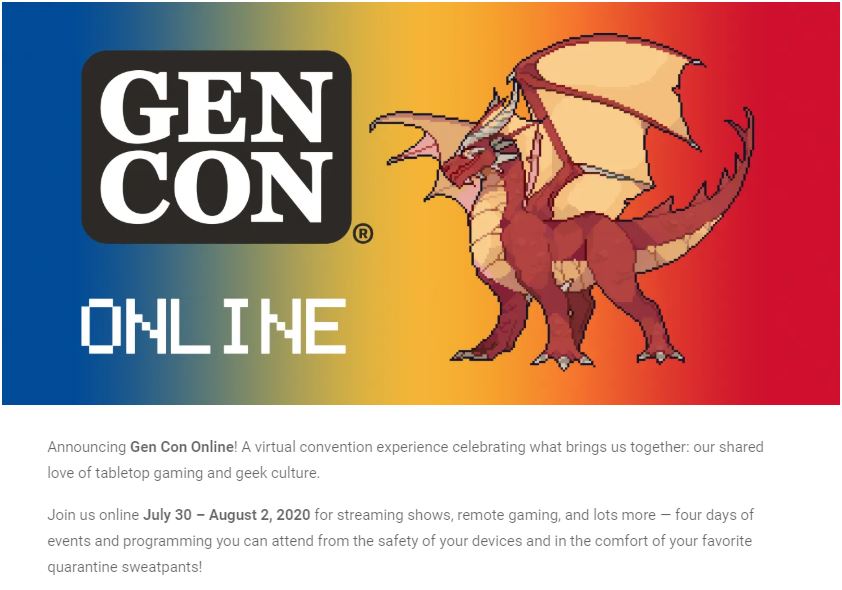 I think we all saw this coming and I'm very pleased Gen Con made the decision to protect the lives and health of their vendors and attendees. As I am not an industry insider, I don't fully appreciate the financial blow this might represent for Gen Con or those companies that rely on the convention. But I do know that for many this isn't a matter of missing out on fun but a serious blow to their financial well being.

I for one is glad they did this for people safety.

This isn't really any surprise, but I'm glad they're giving the option between fowarding it to 2021 or taking a refund. I'm sure many that would still want to go to 2021 might need the money during this trying time.

I guess that puts eyes on DragonCon and PAX West now as they're the only really big conventions left for 2020. They're both the first weekend of September, the former in Atlanta, GA, and the latter in Seattle, WA. There's also PAX Unplugged in November in Philadelphia, but I don't think they're quite as big. Same with BGGCon in Dallas in November...though I noticed something weird with their page. They announced registration opened in March (which means they knew COVID-19 was a thing), but their policy is no refunds for any reason (should the event be cancelled, tickets roll over to 2021).

Good on them for doing the responsible thing, but still sad.

All of this makes me think I should hit up a convention next year; it's been ages.

Well, assuming we have them next year.

I would not be going this year due to just purchasing a house, but I am glad that they are doing this to keep everyone safe.

Abstruse said:
I guess that puts eyes on DragonCon and PAX West now as they're the only really big conventions left for 2020. They're both the first weekend of September, the former in Atlanta, GA, and the latter in Seattle, WA. There's also PAX Unplugged in November in Philadelphia, but I don't think they're quite as big. Same with BGGCon in Dallas in November...though I noticed something weird with their page. They announced registration opened in March (which means they knew COVID-19 was a thing), but their policy is no refunds for any reason (should the event be cancelled, tickets roll over to 2021).
Click to expand...

Origins has been postponed to Oct 7-11, so that's also still on the horizon (if they don't need to ultimately end up cancelling - which I might expect).

Why not just postpone it to June or July?
edit: I'm retarded and though it's at the end of May