Alligator Alley Entertainment (AAE) is adapting Gregory A. Wilson’s fantasy series the Gray Assassin Trilogy to tabletop Dungeons & Dragons Fifth Edition. Rich Lescouflair of AAE agreed to talk to me about the Kickstarter, the source material, what they’re adding with 5e, and how life and Alligator Alley are after the passing of Brian Dalrymple. 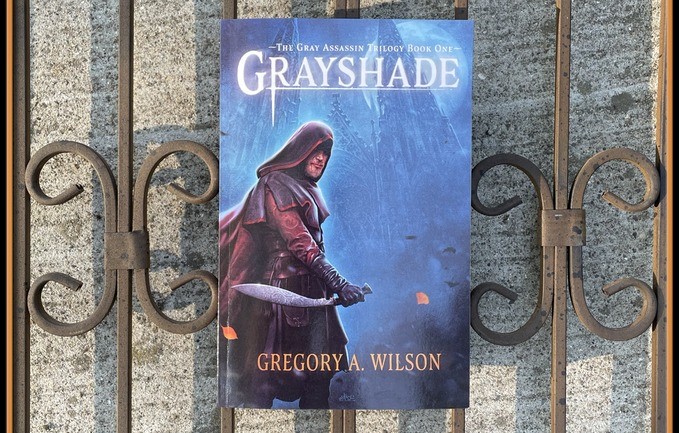 EGG EMBRY (EGG): Thanks for talking with me. What can you share about your Grayshade - Dark Fantasy Novels and RPG Kickstarter?
RICH LESCOUFLAIR (RICH): Thanks for having me! The Grayshade Kickstarter brings together three companies and several major creative professionals to deliver the first elements of an immersive world of dark fantasy from award-winning author Gregory A. Wilson, who previously wrote our 5E compatible Tales and Tomes from the Forbidden Library and streamed the flagship campaign of our Esper Genesis RPG. Alligator Alley is producing the Grayshade RPG—a 5E powered rules and setting designed by me and author/veteran designer Aaron Rosenberg. In Greg’s Gray Assassin Trilogy (about which more later), through elite assassin Grayshade’s eyes readers experience the city of Cohrelle, a world of shifting loyalties, dark faiths, and convenient alliances, and in the Grayshade TTRPG, players will be able to enter that world themselves, creating adventures filled with intrigue, danger, and triumph in the dark streets. We’re super excited about this, and combined with the other folks on board, we think we have the experience to create something amazing. Atthis Arts, an award-winning independent publisher from Detroit, Michigan, will be producing the completion of Greg’s The Gray Assassin Trilogy. The first book in the trilogy, Grayshade, is about an elite assassin who kills in the name of Argoth, the Just God. In Cohrelle, the Order of Argoth dictates justice, and Grayshade remains its greatest acolyte. But when a mission is unexpected, Grayshade does the one thing an Acolyte of Argoth cannot do: he asks why. In the cascade that follows, Grayshade must use all his skills to stay alive and unravel the truth at the heart of the conspiracy which surrounds him...even if it costs him his soul. Grayshade is a novel of faith, defiance, and redemption. Books Two and Three, Renegade and Heretic, continue the story, and we have further stretch goals for audiobook editions. Put this all together, and we have tons of great stuff to offer people on both the TTRPG and fiction fronts! 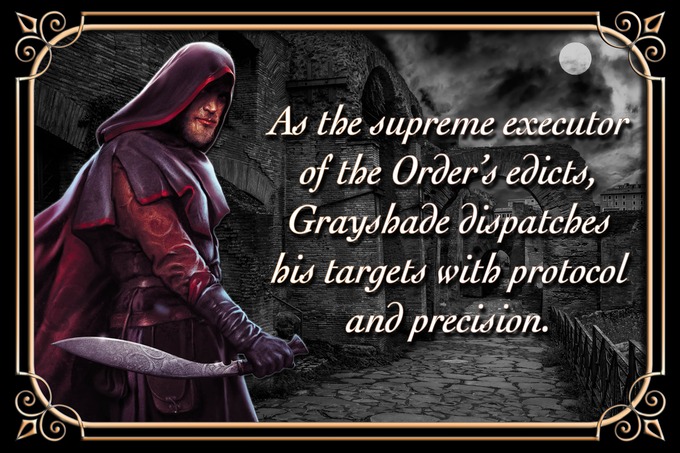 EGG: This RPG uses the Dungeons & Dragons Fifth Edition ruleset. Will the RPG book be a campaign setting sourcebook or will it include core rules as well?
RICH: Both, actually. The RPG has a wealth of new character options, including five new classes, a new magic system called Soundshifting, and a Faith mechanic—a character feature used that reveals conviction and doubt and the influence they have upon your character’s actions. The book also includes a rich setting based in the city of Cohrelle, including detailed lore, encounter locations, major NPCs, story hooks, a city map, and an introductory adventure. Our hope is that the RPG will capture the dark fantasy vibe of Cohrelle and those who live within it, the fast-paced 5E rules lets a group just sit down and start going without much preparation. We’d like it to accommodate quick adventures and longer, more complex campaigns.

EGG: Are you planning any new monsters, ancestries, magics, or rules to make the system closer to the novels?
RICH: The RPG introduces a magic system called Soundshifting. It also provides rules for a new Faith mechanic—a character feature used that reveals conviction and doubt and the influence they have upon the character’s actions. There adventure includes several monster and NPC stat blocks, with more planned as the game expands. We don’t have different ancestries to begin with, but as Greg’s world expands, our options for the game will too.

EGG: This is based on Gregory A. Wilson’s The Gray Assassin Trilogy from Atthis Arts. What about book one, Grayshade, inspired this RPG?
RICH: I’d say the feel of the world was the biggest thing which grabbed us. It personally reminds me of gaming in classic dark urban settings like Thief: The Dark Project and Assassin’s Creed. Our work with Greg in the past has proven that he really knows how to create and present a world in his writing, and the whole book just drips atmosphere…Grayshade is an intriguing character with a shadowy past, and the city he operates in is fascinating, along with the people he encounters. When he started telling us about possibilities for the game, we were hooked, and knew working with a talented game designer such as Aaron Rosenberg to bring the 5E rules to life, we’d be in excellent shape.

EGG: You’re funding both the setting book and the next two novels with this crowdfunding. How tied together will the books and game be?
RICH: They’re very much tied in with each other, but in a way that we hope enhances both rather than being a requirement for enjoyment. If you’ve read Grayshade, you’ll appreciate the aspects of the game which refer to various elements of that novel, along with the two sequels that follow, and if you play the game, you’ll definitely appreciate how the novel gives you more of the world and story. But either way, you can still enjoy the book or the game without having to read and/or play the other. 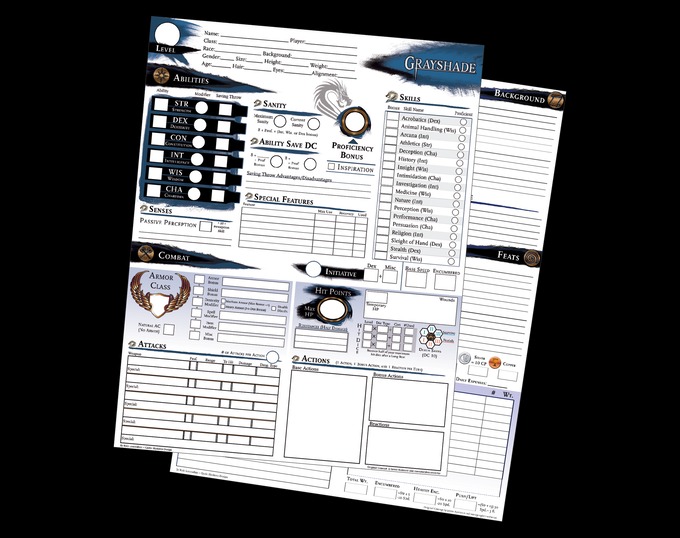 EGG: You’re working with Norse Foundry on the Kickstarter. What are they bringing to the mix?
RICH: Norse Foundry makes great products, and for this campaign they’re producing a limited-edition Founder’s Coin, a physical coin with elements of the Grayshade world engraved on both sides, using artwork from professional artist TariToons. At a base level the coin will be one color of metal, but as we get more support, NF can enamel the coin and bring out the full colors of the stained glass. And these are individually numbered and limited to the Kickstarter, so the sooner you back, the lower your number will be. It’s a super cool addition to an already awesome product.

EGG: Since this is not Alligator Alley Entertainment first time working with Gregory A. Wilson, what can you share about your partnership and success with Tales and Tomes from the Forbidden Library?
RICH: Greg is a wonderful person and a pleasure to work with. He is so fully immersed into his creation, it allows him to present it in such a way where we couldn’t help but be drawn right in. When Greg pitched Forbidden Library, the concept shared a relation with something Brian had always wanted to do, and Greg’s Hearthglow Academy setting had such amazing detail and interesting characters. With an already super-fun adventure in hand, we reached out to everyone we knew to contribute to the “library” itself, turning the product into both a module and a sourcebook. I think all of us being open to each other’s ideas and putting the fun first is what makes the product shine. 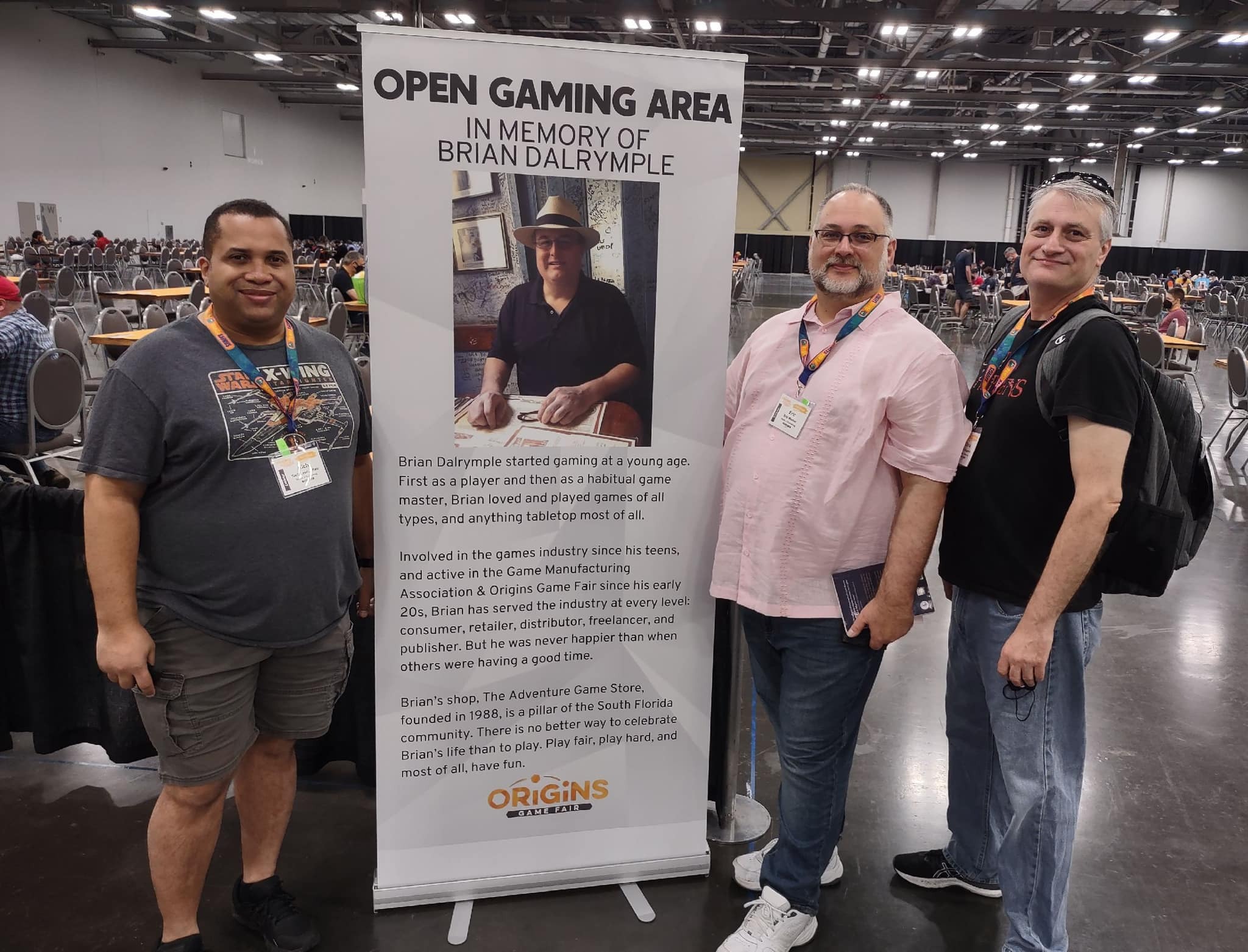 EGG: Not to derail this conversation, but I want to talk about Brian Dalrymple. Before his passing, Brian was an integral part of Alligator Alley Entertainment. Is it okay to discuss what life and AAE are like after Brian?
RICH: I don’t mind. Brian’s passing was devastating, as he was also one of our closest, dearest friends. I don’t think I can express in words how much it affected us. Our friendships were strong before AAE even existed, so we were able to help each other deal in our own way. As part of AAE, Brian’s boundless creativity and enthusiasm were invaluable. He was, without a doubt, the heart of our team. A lot of what I create now is to honor his memory, and I’d like to think he’d be proud of our recent accomplishments and of all the cool things we have on the horizon.

EGG: He is missed. Let’s talk about another project that came about during Brian’s tour, Alligator Alley Entertainment’s Esper Genesis 5e. What’s next for that RPG? Beyond Grayshade - Dark Fantasy Novels and RPG, what else are you working on?
RICH: We have a lot going on with Esper Genesis. We’re starting up a new season of adventures and have plans underway for new setting and rules expansion supplements. Right now, we’re working on our cross-platform project, Expedition from the Mysterious Peaks. It’s an adventure path that combines D&D 5E with Esper Genesis and can be played using either or both. It also introduces a new “magepunk” style setting that shares the same world as Tales and Tomes from the Forbidden Library and our grim fantasy Demonbane Chronicles series we still have in the works.

EGG: Thanks for talking with me. Where can fans follow your campaign and work?
RICH: Thank you for the opportunity! The Grayshade Kickstarter is currently live and can be found here. You can also find our team at:
I can personally be found on Twitter @skydawn1

How do you dispatch a target with protocol? Smother them under a pile of forms?

D&D 5E Final Hours on Kickstarter! Violet Dawn: Exile is a graphic novel based on the Ennie-nominated d20 Setting