Index Card RPG Master Edition provides light-prep GMs a multi-genre system robust enough to last for long campaign play but designed to be run one session at a time. You can certainly run a one-shot sci-fi horror adventure for Halloween. And that adventure might just end up kicking off a new campaign centered on the horrors and travails of space travel and exploration using IC’s Warp Shell World. 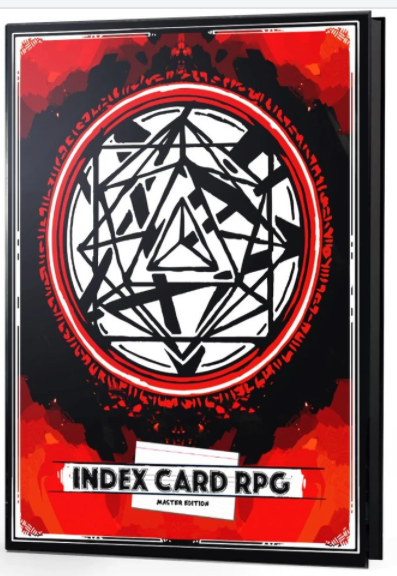 Index Card RPG is the creation of Runehammer (Runehammer - YouTube, review of the Index Card RPG, and interview about the Index Card RPG) and now distributed as a Master Edition in traditional and deluxe print by Modiphius Entertainment. Thanks to Chris Birch of Modiphius for providing me the updated PDF to review. I know you’re going to ask about the name. Before IC became an RPG, the creator went from elaborate terrain pieces to using index cards with one piece of art on each one serving as connected spaces. IC the RPG started with that seed and began to grow. IC started out as much about having a can-do GMing attitude and celebrating a gaming lifestyle as it was about robust game play and amazing campaigns. It still has those features and has morphed into an engine for getting right to the heart of playing an adventure at the table with your friends right now. Not reading about it or talking about it. Playing an RPG with your friends. Right now. To the best of all of your abilities.

So how does a GM start? IC has sample Worlds. The GM can start with choosing one like Warp Shell. To kick off a Warp Shell campaign a GM should read the Core System (under 20 pages) and play the included encounter called Trial: Grey Hill Inferno. After understanding the basics, the GM can read the GM’s Guide (about 30 pages), take the oath, and get ready to set up their first adventure for Warp Shell.

Warp Shell starts on page 200 and runs for 20 pages. Warp Shell is a universe crumbling under the appetite of a god-like being called The Devourer. The PCs work together to survive and search for some hope to stave off the end of all things by working with a starship called a Warp Shell. As a living thing with an incomprehensible mind, a Warp Shell cannot be directly piloted. It might be bargained with, but only the Warp Shell can utilize its drive system. The crew never knows where they’ll appear next exactly.

Warp Shell works well just running one adventure at a time. An adventure can include three encounters, a twist in the middle, and a big cataclysmic end. 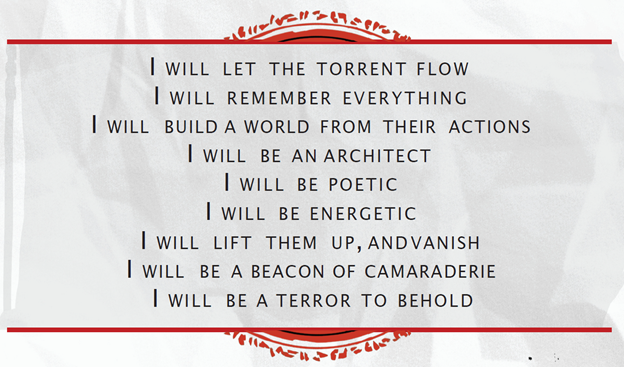 War on the Underworld​

With Halloween coming up, I think the PCs dealing with the supreme powers in the underworld makes sense. These two are the android betrayer called Xa’as and his cruel, infernal master Vorlac. Vorlac struggles to expand his dominion of pain to every corner of time and reality. Some call this realm of his Hell. Vorlac’s demonic forces have overrun the PCs’ home worlds and continue to spread misery and death. The PCs want to find Vorlac and strike him down.

The rogue Warp Shell called Hellbound is a being of vast knowledge and infinite capacity for chaos. Rumor has it that Hellbound knows where Hell is. The PCs need to find Hellbound and negotiate with him to lead them to Vorlac.

The last known sighting of Hellbound was at Purgatory Observatory but that is not where the adventure begins. For unknown reasons, the PCs’ Warp Shell brings them out on the other side of the system from the station in an unexpected debris field. The PCs must deal with dangerous chunks of metal and burning fuel before they can escape and make their way to the station. Once they get to the Observatory (currently dark lit by hanging in front of the huge dark matter nebula that looks like a jagged dark hole torn in the starfield) no one answers their hails.

If they go onboard anyway, they find the station overrun with undead and inundated with dark matter energy. Anyone who dies here becomes undead and if you stay too long you also become undead. The PCs must race to find the computer with the flight plan for Hellbound.

PCs who follow the flight plan discover it leads right into the dark matter nebula. Hellbound is locked in battle with undead piloting fighter ships which guard a dark obelisk. If the PCs help Hellbound defeat the undead they can try to convince the Warp Ship to work together. If the PCs are successful, Hellbound reveals that the obelisk is a star map that leads would be followers of Vorlac straight to Hell. And only Hellbound can read it. He won’t reveal where it leads. But he is willing to guide the PCs there. And the first adventure wraps.


The Secret of the Cards​

What happens from here? That is the secret of Index Card RPG. Don’t worry about. Don’t even think about it. Get this one adventure ready and play it. Find out who the PCs are and let them take the lead. Their actions will naturally lead to the next adventure.

What about the details of this first adventure? IC walks a GM through step by step. From basic rules like setting targets and determining effort to setting up room designs using timers, threats, and treats the GM is given the tools to get the first adventure designed and to the table. And there are plenty of example monsters, ships, rooms, arts, maps, and adventures for inspiration. And if sci-fi isn’t your thing, the RPG also includes a full fantasy World as well as overviews of Worlds for supernatural western, Stone Age dawn of time (no magic), and superheroes.

The power of Index Card RPG has always been in the play. The new Master Edition takes the raw energy and easy play of the RPG and finally gives it the physical presentation it deserves. Even if you don’t play Index Card RPG, the advice, ideas, and art can all inspire a GM. The pre-order currently also includes 71 pages of black and white print and use paper miniatures. This one was a winner four years ago and is still a winner today in this master edition.
Click to expand...

I'm reading on this game currently. Thanks for the article. Very interesting. I did't buy the previous incarnation because it requiered buying several other booklets. But now that evertying is between two covers it is far more attractive to me.