With the hype of Episode VII I plan to run a Star Wars game during December. I will play it with my family using the D6 system.

I ask you to please suggest me a module to run. I want something interesting with many opportunities to roleplay and all the clichés from Star Wars, must be very fun, and rather short so it can be fully played during 3 sessions.

I plan to use all the Star Wars soundtracks to give it the right feel. What else would you suggest to set the mood?

Which are the best Star Wars RPG's modules?

Thank you in advance!

Check the downloads link at http://www.d6holocron.com/

If you can find Strike Force Shantipole, I enjoyed it -- capture the plans for the new B-wing fighter.

Thanks a lot, I would have never imagine that all those adventures where available for everyone!!! I will start with Strike Force Shantipole

Oh gosh, I'm in the same boat! I want to run a pbp game using WEG, and I'd like a good idea of what modules would make a good... campaign?

The DarkStryder campaign is pretty awesome..although the end is a tad rushed.

HobbitFan said:
The DarkStryder campaign is pretty awesome..although the end is a tad rushed.
Click to expand...


I'm heard good things about it, too. However, I'm thinking about adventures that could work in multiple eras of play, plus with the generic templates (not the pre-made characters in Darkstryder).

1) Rebellion is good, but if Luke is the last of the Jedi, how can we have lightsabre battles?

2) If I do it after Return of the Jedi, I don't get the Empire or Darth Vader.

3) If I do the Old Republic, I get an empire and Jedi, but references to the movies or the Clone Wars TV show are somewhat harder. Also I've never played the video games, and I'm sure some people would go "but what about...", and get angry when I screw up the lore.

4) Clone Wars is great, but the WEG games are mostly "you're rebel agents, look out for storm troopers", so I'd have to convert everything.

5) I have been avoiding the trailers for Episode 7: the Force Awakens, as I'm under the impression it will tell me the whole movie. I'm pretty sure I get the gist of it already (ie: the Empire has a new Sith Lord plus that shiny metal storm trooper (light sabre proof armor?); they are chasing the daughter of (probably) Han and Leia, and the black guy, as they're the new generation of Jedi; who escape the bad guys on Tattooine via Han and Chewie in the Falcon; hilarity ensues, plus the Empire is back). I'm pretty sure that's everything, so maybe I can just watch it?
So while I'm pretty hopeful we'll get the Empire back, and more Jedi, I worry the movie will have important stuff that I might need to know about the era. Like maybe when "the force awakens" we'll have a massive increase in force users of both light and dark sides? I don't know, but things that would affect my ability to convert the WEG modules to the new era (my preference) I won't know about for another two months.


Anyway: It's a pickle, for sure. Maybe go along the lines of Star Wars: Rebels, and just assume that more than Obi Wan and Yoda survived to train player heroes?

As I see it, your options are:

1) Run a "canon" early Rebellion era story, and the PCs can still be force sensitives in search of the Jedi (finding lightsabers, etc), before Luke came into the picture. This is pretty much the take that Rebels has, and also the FFG default assumed setting for F&D (although it is set after the Battle of Yavin, so Luke is in the picture, just still very much a novice). In the FFG (and Rebels) version, the PCs are trained by Force spirits, holocrons and the very rare surviving Jedi.

2) Run an "alternate universe" early Rebellion era story and assume that more Jedi survived to train Jedi, and force users/Jedi are much more prevalent than in the movies.

3) Run something after RotJ. Although you can't - at least if you want to remain canon - have Darth Vader running around, there is still the Imperial remnant to deal with and the new canon material suggests they were fairly active at least up until a year after the Battle of Endor. From what we know about the new post Battle of Endor canon, Luke wasn't actively recruiting/training but his activities are pretty much a mystery to date. For now at least, this period is an open slate canon-wise, so go ahead and fill it.

FWIW: watch the trailers. They are great. There is nothing really spoilery in there with regards to the plot of Episode 7. Lots of tantalising hints, but I don't think you'll ruin your enjoyment by watching them.

gribble said:
FWIW: watch the trailers. They are great. There is nothing really spoilery in there with regards to the plot of Episode 7. Lots of tantalising hints, but I don't think you'll ruin your enjoyment by watching them.
Click to expand...


Done and done! Yeah, I caved. It wasn't spoilery, and there are so many unanswered questions. Yes, I've got some more NAMES of characters, but I already knew it was something or other. We still have no idea what Luke was up to (my guess is we'll have a pile of new Jedi show up at the end, trained in secret; him going dark side is ridiculous). We know Fin and Rey are running from the Empire because they're the good guys, and likely Jedi trainees. But otherwise? Nothing really different than what I already thought, and no concrete "you're right" or "you're wrong" moments. Even Wookipedia doesn't have much, and they're already reading the novels that have been released.

I have a pbp suggestion on another Forum, but maybe it'll have more feedback on ENworld. Basically I'll just have a small corner of the Galaxy, cut off from the rest for the most part, that's ruled by Imperials (another group than the ones in the trailer, I guess?) and the systems are cut off from the Alliance territories. The heroes will be potential rebels who want to fight off their own oppressors, and have some help from the Alliance, but otherwise operate like the traditional characters.

fireinthedust said:
I have a pbp suggestion on another Forum, but maybe it'll have more feedback on ENworld. Basically I'll just have a small corner of the Galaxy, cut off from the rest for the most part, that's ruled by Imperials (another group than the ones in the trailer, I guess?) and the systems are cut off from the Alliance territories. The heroes will be potential rebels who want to fight off their own oppressors, and have some help from the Alliance, but otherwise operate like the traditional characters.

Seems like a good approach to me. From what we know so far, it isn't a stretch to assume there are a number of isolated Imperial offshoots struggling to retain power in the months after the Battle of Endor.

With it's own rules, perhaps its a place where Imperials and Rebels can interact on a more-or-less equal footing, without being overwhelming, and since its somewhat physically isolated stuff could go on there that doesn't happen elsewhere.

The Tapani Sector box set introduced Saber Rakes (character template) and Light Foils. These are mostly bored mostly nobles who have taken up a dangerous version of swashbuckling. The light foil acts as a light saber in all respects except that the damage is 3D (+/- Control (if any)) instead of 5D, and when there's a 1 on the wild die, the Foil switches off and has to be turned on again (which counts as an action).
There were two collections of Instant Adventures and Instant Adventures: Tapani Sector which are great as either a quick short, or side treks, or strung together as a mini campaign.
On the other end, "No Disintegrations" has a bunch of short adventures for the Bounty Hunters.

The Nerd WhoFell to Earth

My group really liked No Disintegrations. You play bountyhunters and there are five different bounties that can be strung together for a sort of campaign. We were in high school when we played it and I have not looked at it again so maybe it doesn't hold up. But

Anyone looking for Strike Force Shantipole inspiration: check out this week's episode of Star Wars Rebels (Season 2, Episode 6: Wings of the Master). 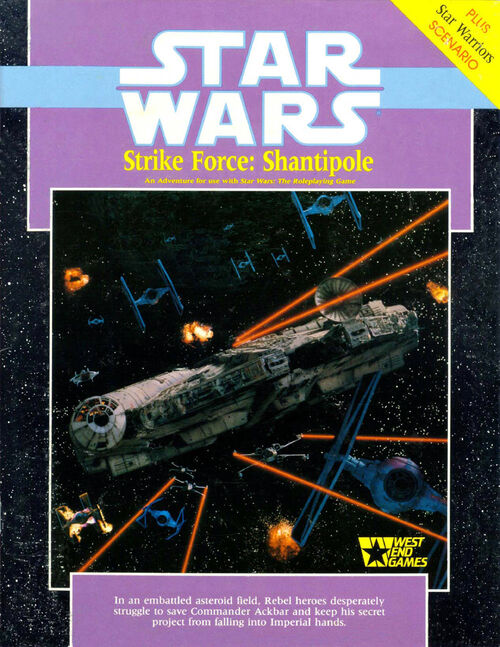 I would have to recommend the Tatooine Manhunt module: http://starwars.wikia.com/wiki/Tatooine_Manhunt. I love it and have run it about 4 times in practically every version of Star Wars RPG. I really well contained adventure with all the tropes one a clearly recognisable world. Kids would love it.

So, did this get off the ground? If so, what did you play (system and adventure)? How did it go?

Connorsrpg said:
So, did this get off the ground? If so, what did you play (system and adventure)? How did it go?
Click to expand...


It did and it went awesome!

We used d6 reup´s rules and following Olgar Shiverstone´s advice we started with Strike Force Shantipole. One of the players really wanted to be Princess Leia so we set the story right after the battle of Endor and she was delivering the message to Ackbar herself while escorted by a Young Jedi who was Luke Skywalker´s first Padawan and a bounty hunter very a-la-Boba Fett (those where the 3 players). Because by the time of the Battle of Endor the B-Wing already existed Ackbar was working on a super-charged prototype of it.

After that we played “The Long Shot Campaign” from the supplement STAR WARS Campaign pack.

Due to our light style of play we were able to finish all within just 3 sessions of about 5 hours each.

As a Xmas game and taking advantage of the hype of Episode 7 it was very enjoyable!

I recently found out that this December we will have the new movie Rogue One and IMDb says about it: “Rebels set out on a mission to steal the plans for the Death Star.”, so I have no idea what to prepare for this year, any suggestions (luckily we are still just in February!)??

Sounds great. I have that adventure and I have a game set at end of Clone Wars, so it is a possibility. I might have to read it again.

It was great how you allowed your players' choices of PCs.

I made my suggestion above. Tattooine Manhunt is one of my favourite adventures for any game.
Last edited: Feb 18, 2016