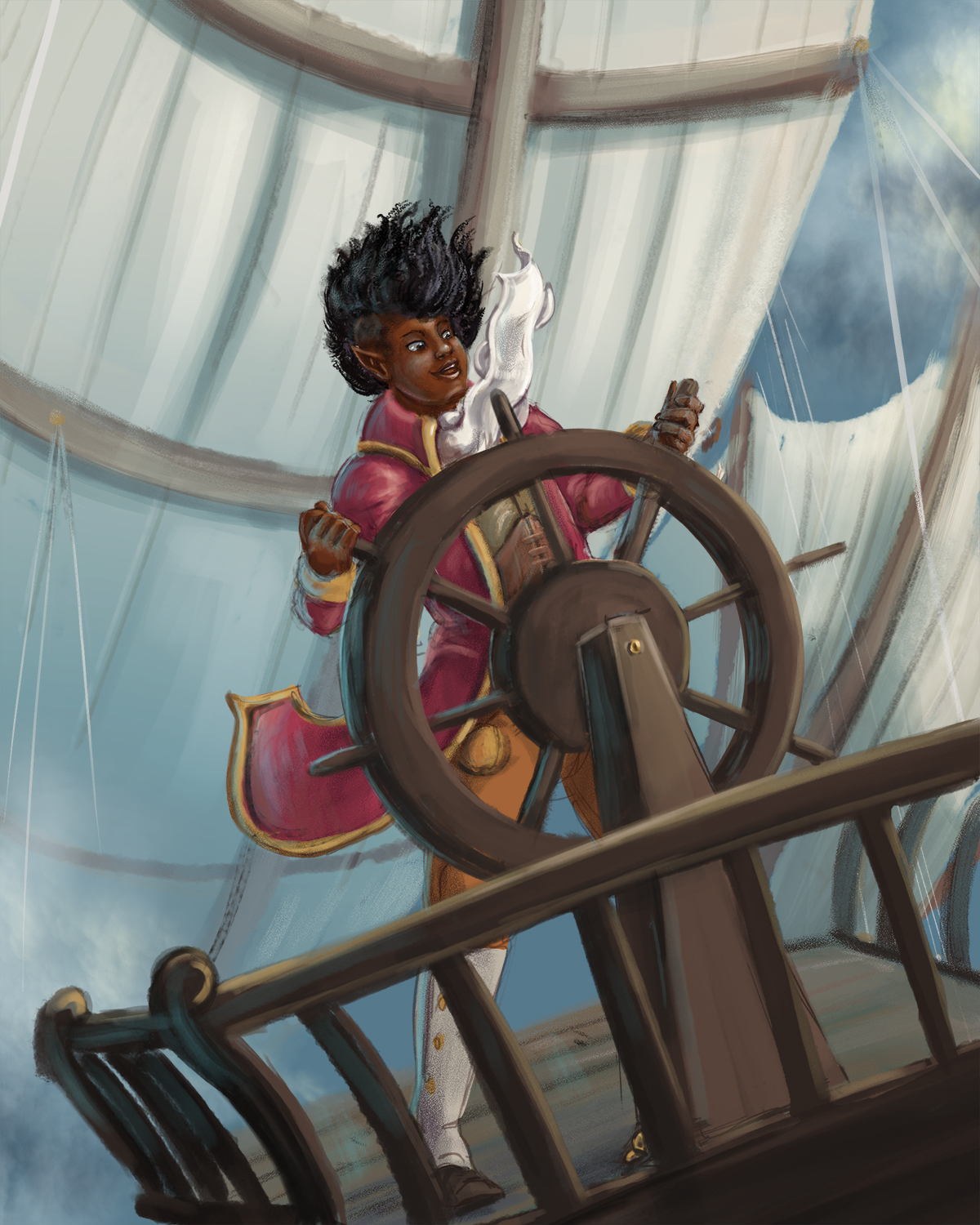 Canticle of the Wing
The simirengo are an eclectic avian people with a deep connection to nature. Different groups display characteristics from the birds their ancestors bonded with, meaning there are potentially as many different kinds of simirengo as there are birds in the sky. This article introduces mechanics for the simeringo heritage, as well as three related cultures.
By Thiago Rosa

The Western Shore
Flanked by towering cliffs on one side and the treacherous ocean on the other, the Western Shore plays host to a variety of unique monsters and hazardous exploration challenges. Your heroes won’t have to face these trials unaided, however, as the beach is also home to potentially helpful NPCs and the assistance they can provide. These mechanics can be used separately or in conjunction to populate your oceanfront adventures.
By Marc Kenobi

Synergy Feats for Extraordinary Heroes
Finding oneself is often a strange endeavor, and the places these journeys take a hero can reveal uncanny powers and astonishing truths. This article features several first-class synergy feat trees to bring out a character’s hidden strength.
By Mike Myler

The Zephyr's Complement: Steamfantasy Archetypes for an Airship Crew
Daring feats of prowess, fantastical machines, and acts of eldritch gunslinging are just ahead! Whether used together as a crew or individually for a sepia-toned loner, these archetypes are for innovative characters driven to meld steam, magic, and steel.
By Rachel Williamson

I gotta say, I’ve been really impressed with how customizable the GPG races have been (looking especially at Constructs and Dreamborn), and I’m excited at the suggestion that the Simeringo will be similarly diverse.

One thing I need to know: What on earth is the etymology of Simeringo?

Super excited for you (and a little jealous)! How many pieces did you submit for consideration? I’d like to make my own contributions.

xiphumor said:
Super excited for you (and a little jealous)! How many pieces did you submit for consideration? I’d like to make my own contributions.
Click to expand...

In the first two pitch groups I put three forward, and had one selected from each. In this last one I put five forward. Several were selected from the recent pitch, One of which was broken into two articles.

I got super lucky in that.

Steampunkette said:
In the first two pitch groups I put three forward, and had one selected from each. In this last one I put five forward. Several were selected from the recent pitch, One of which was broken into two articles.

I got super lucky in that.
Click to expand...

Do you know roughly when the next one might be?

Sooner than the usual delay between pitch calls. Which is 2-3 months. So maybe July?

I'm gonna go ahead and post what my earlier pitches looked like so people can get an idea of what to send in. These were three of my pitches, one of which was accepted.

Pitch 1)
Tragic Destinies
Rather than motivations, these destinies are ends that cannot be avoided. Because sometimes you want to play the tragic hero whose end is not comfort and wealth, but solitude or martyrdom. And, of course, even a character who begins play saddled with a tragic destiny might be able to change it…

Martyr
There are many who will die for a cause. Who are willing to give their lives in war, or exploration, or to the advancement of knowledge. You, in particular, are destined for this end. To die an inspiration to others, to achieve great things and meet your end in dramatic fashion.
Source of Inspiration: Tribulation.
All martyrs must face difficulty, and continue forward regardless. You gain inspiration whenever you and your party faces a serious setback to your current or long standing goals. As well as any time you fail your second death saving throw.

Inspiration Feature: Selflessness
During a short rest you may give of yourself to help others. By expending your Inspiration during a short rest you may spend your hit dice on behalf of others, allowing them to recover hit points based on the amount you roll. You may assist as many characters as you have hit dice, splitting your pool as you see fit, but any character who benefits from this effect must receive all of the hit point recovery from any hit dice spent on them, the hit points cannot be pooled and shared one by one.

Fulfilling your Destiny
You fulfill your destiny of Martyrdom by dying in a heroic manner, in a way which inspires others of, and to, your cause.
Fulfillment Feature: Miraculous Morale
In the wake of your noble sacrifice, all allies who were present for your death, or were saved by it and aware of it, gain inspiration and temporary hit points equal to your level which last for 24 hours. Any Followers you may gain such benefits as well, including those who aren’t present or saved by your sacrifice. Those who were not present gain the benefit when they learn of your death.
You have a choice to make, once this feature is expended. You may either inspire a Follower and use that follower as a player character going forward, either by rolling them up as a PC or putting their name on your dead character’s sheet, or you may have your character return to life. This occurs 24 hours after your death, and restores you to full hit points.
Click to expand...


Pitch 2)
Secret Techniques
A common trope in martial arts movies that is sometimes carried over into roleplaying games is the idea that there are secret combat styles that are near impossible to learn without accomplishing some great and terrible quest or finding true enlightenment or finding forbidden knowledge. Secret Techniques are combat maneuvers and possibly even an entire Tradition which can function like the Rare version of certain spells, or create quasi-magical effects to allow for gishy character concepts.

Psychic Warrior Maneuvers
Intuition, Focus, Psionics
Those who tap into psionic power in combat may use the same physical maneuvers as other fighters, but they also gain strange power that infuses their weapons with psionic might, allows them to leap great distances to rain mighty blows, or create such incredible focus as to strike with all force in a single motion.

Focused State (1 Point)
1st degree Psychic Warrior bonus action (stance)
You take a moment to expand your awareness across the field of battle, and then narrow it to a single fine point.
Choose a target within 60ft. You gain an expertise die when making saving throws against effects created by your target.

Psionic Strike (2 points)
1st degree Psychic Warrior action
By focusing your willpower upon your weapon you are able to temporarily charge it with pure psionic power. Until the start of your next turn, your weapon attacks deal Psychic damage in addition to any other damage types, and you may expend your reaction to discharge your weapon on a successful hit.
Discharging your weapon ends this effect, and forces your target to make a Wisdom save against your Maneuver DC or be pushed 10 feet in any direction you choose.
Click to expand...


Pitch 3)
Horrors of the Kingdom of Night
Playing into horror which everyone loves with the theme of Ravenloft without -saying- Ravenloft. A Slayer Destiny focused on the killing of a terrible evil and lesser evils tied to it, and the Cursed and Haunted backgrounds.

Cursed
Whether through your actions or through deals made by your parents, you are cursed. Whatever power laid this upon you has not made itself known, but it’s effects are felt, regardless. And it has shaped your life and your interactions with others. It has made you wary and careful, for a tiny slip, a failed moment of etiquette, a dirty glance, may trigger the curse. Woe betide should that happen.
How did you become cursed? Are there those who sympathize with your plight? What transgressions might trigger the curse’s worst effects? What does the curse do?
Ability Score Increase: +1 Cha and one other ability score.
Skill Proficiencies: Culture, Perception, and one of Arcana, Nature, or Religion based on the source of your curse.
Languages: Two of your choice.

Feature: Accursed
Your curse can flare up at any time, and when it does it may cause problems for those in the area. Whenever you fail at a Culture, Deception, or Persuasion check your curse manifests in a manner that you work out with your Narrator ahead of time. The failed check is ignored, after that point, and you immediately replace it with an Intimidation check with which you have expertise. You retain expertise on intimidation checks until the end of the encounter.

Adventures and Advancement
Your curse, and the entity which placed it upon you, may press you to complete specific tasks such as transporting a specific item from one place to another, defeating a specific enemy, steal important documents, or otherwise force compliance. Work with your Narrator to determine how your curse is used as a lever in these situations.
Click to expand...


As you can see, there's not a ton of difference between them when it comes to the quality of writing, style choices, or formatting. It comes down to which one fits the editor's intentions best.
Last edited: Jun 21, 2022

Thank you so much! That’s super useful! 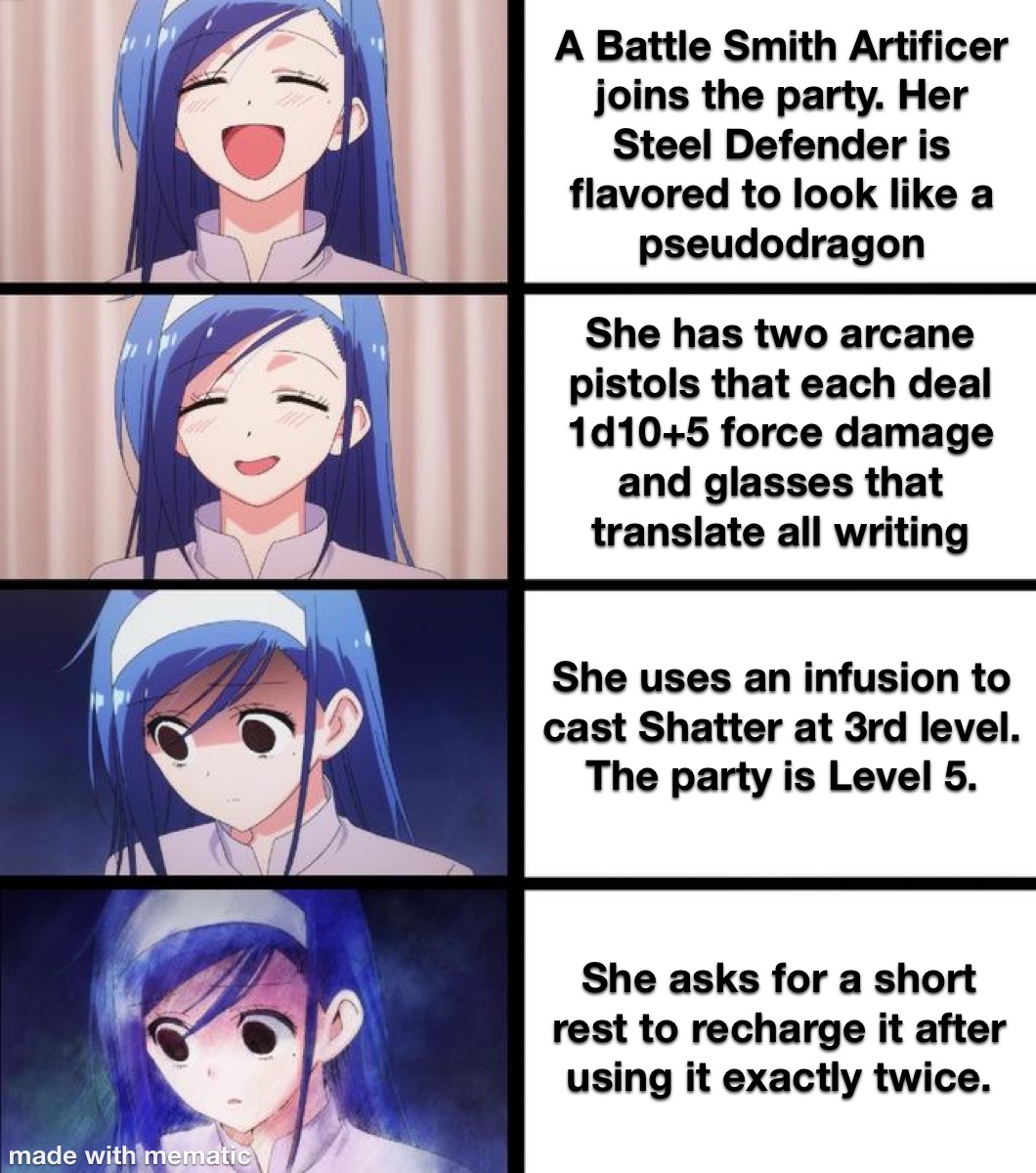 Also, Eldritch Gunslinging reminds me of this meme I made a while back.

That right there is how I imagine PC's helming a boat while singing "everybody look at me cause I'm sailing on a boat!"

xiphumor said:
View attachment 251654Also, Eldritch Gunslinging reminds me of this meme I made a while back.
Click to expand...

... Yeah I could see that happening. A lot of what the Gunslinger does is built around making their Eldritch Blast fairly central and being quite "Hellboy" with some other options, as well. But it doesn't give you any additional spellpoints.