PJ Coffey, co-host of Morrus’ Unofficial Tabletop RPG Talk, author on Level Up: Advanced 5th Edition, and publisher of Homebrew and Hacking, is on Kickstarter with more content for 5e and A5e. As they expands their creative catalog, they agreed to talk about how their Crafting Personalised Feats. 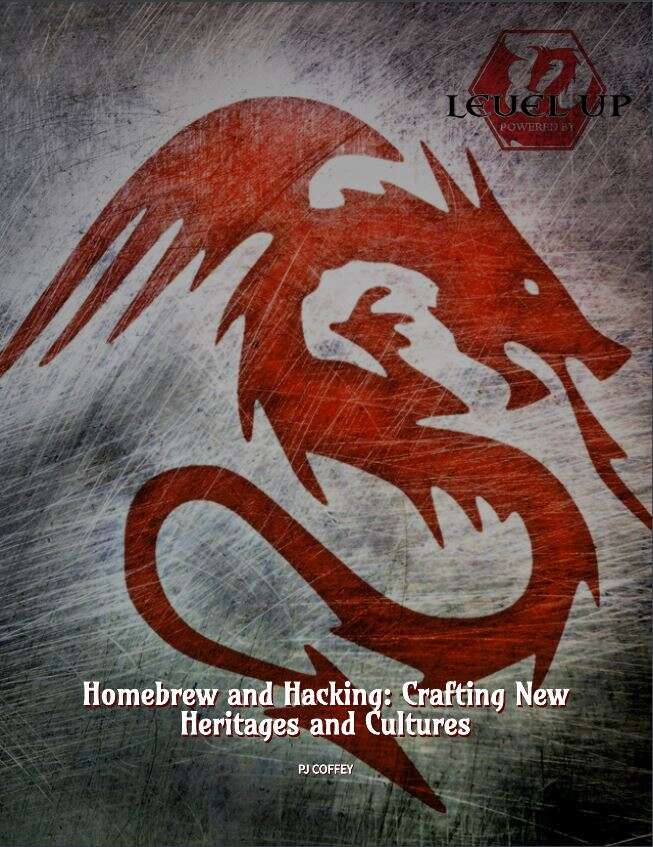 EGG EMBRY (EGG): Thank you for talking with me again! You have a new project on Kickstarter, what’s the pitch for Homebrew and Hacking: Crafting Personalised Feats?
PJ COFFEY (PJ): Hey Egg! Big fan of your column, really helps me stay current on crowd funding. Crafting Personalised Feats is exactly what it sounds like! Using a simple point buy system, you can create custom feats that will be balanced for play with existing material for D&D and Level Up! Advanced 5th Edition.

EGG: Looking through the draft, there are charts of abilities and costs. How does this system work?
PJ: It's simplicity itself! You work out what you want your feat to be about and then you choose from the lists of traits to put together your own. If you want it to fit seamlessly with a regular game then just buy up to the points cost. If you want to go bigger than that's fine too. Ultimately we're trying to support GMs and make their lives as easy as possible! They're sorted into a variety of categories, but that's for ease of use rather than a restriction of how you can use them. There's even a brief guide on how to make your own traits although it's of necessity a bit loose in it's guidelines, we've got loads of examples to help you judge where your work fits.

EGG: Crafting feats, is this for the GM to create them for the player or for players to go their own route?
PJ: Crafting Feats is primarily aimed at GMs but if you want to give it to your players that's valid and means you can have an egalitarian discussion about what goes into them. An excellent place for player's to bring some input into the game and personalise their own Feats. Why not buy a copy for your GM and see what they think? I know I love getting presents as a GM.

EGG: As with your last project, this is for 5e and Advanced 5th Edition. Why set this up for both?
PJ: I think everyone who plays D&D deserves to have creative control over their games and to be able to personalise and customise them to get exactly what they want out of them. Homebrew and Hacking is a publisher that is dedicated to making GMs lives easy and empowering them to make their own decisions. It doesn't add a lot of effort to help make the lives of the people who are running basic 5e still easier, so it seems like the right thing to do.

EGG: This isn’t just crafting new feats. There are several listed in the book, correct?
PJ: Oh yeah, we've got a whole variety of new Feats and some new feat chains as well! We've got worked examples for the synergy class feats from the author of "Multiclass Feats for 5th Edition", Peter Martin, and what we're calling "transformational feats" which build on the work in Level Up! Advanced Fifth Edition that allowed players to explore what happens if they got on the wrong side of a Vampire! We're exploring what happens if you get embroiled in the affairs of fairies, do deals with dark forces or what happens when you come across Shadows, Aboleths or even the Khalkoi Mind Wasps!

EGG: What are some of your favorite options from this book?
PJ: My favourite feats include "Druggist" which leans into the support for poisons given by Advanced Fifth Edition. It really allows players to get creative with their uses so that's pretty cheering. The feat chain to let you get bigger and better pets is also very cool, and I think if you backed the Can We Keep It? Kickstarter you're going to love that one. We also have support for Fearsome Familiar, so Wizards don't feel left out! Probably the most exciting ones conceptually are the feats like schemer and storyteller which provide some mechanical support for the social pillar of D&D. I think they'll be really beneficial to players who want to play more charismatic characters but might struggle a bit with the rolls.

EGG: Who are you working with? Who will provide the artwork for this project?
PJ: This time I'm working with an expanded team! I've got Anthony Alipio who has done a whole variety of work supporting D&D as well as A5e including the first third party adventure, The Sugar Crumb Fairy. Peter Martin from Purple Martin games who has already published Multiclass Feats for D&D as well as a synergy feat and two new archetypes for Level Up Advanced Fifth Edition in the exciting thematic toolkit! Editing the book is Pam Punzalan who fans of Wizards of the Coast will know from Journey through the Radiant Citadel. Pam has also done an impressive amount of work on RPGs in general as well as being a keen player of Dungeons and Dragons in Adventurer’s League. After the stellar job she did on Crafting Heritages and Cultures, Sarah Breyfogle has come back to provide more graphic design and artistic direction for making the book really beautiful. In addition to being a pro DM (see her on Twitch at The Star-Crossed Seaway), Sarah also designed for A5e and I'm really excited about some of the plans she's shared for upcoming supplements! We're all really focused on making sure it's the Narrator’s vision that comes through, making sure that you, the Narrator, can bring your vision to the table!

EGG: When we talked last time, you were kickstarting Homebrew and Hacking: Crafting New Heritages and Cultures. Now that it’s out, what’s the reaction been like?
PJ: Egg, I won't lie, I get quite very emotional about how lovely people have been about it. I've honestly felt quite touched about the kindness shown my work which was completely unexpected. I've decided to include some of the very kind and supportive things people have written about the book including a great quote from Paul Hughes’ who said "This is nice! I think I prefer this to having heritages at all." Paul was the lead on the Monstrous Menagerie, which Sly Flourish said such nice things about, and continues to do amazing work at Blog of Holding. (Keep an eye out for the Dungeon Delvers Guide coming out later this year, he has solved how to do traps well in D&D and I am still recovering from having read it!) Anyway! Overall I think the reaction has been really quite good and a lot better than I expected or could reasonably have expected!

EGG: Beyond this project, what else are you working on?
PJ: Oh! Now you're asking some questions! I'm currently working on various projects with various levels of secrecy, but I'll tell you three things:
EGG: Thank you for talking with me about this project. Where can fans follow your work?
PJ: I have a publisher page where I will load up various PDFs as they become available for the general public including free uploads and examples. Fans (do I have those? Wild.) should always keep an ear out for more info weekly on the Morrus' Unofficial Tabletop RPG Talk podcast and monthly on the Lawfully Chaotic livestream (and Youtube archive!). Right now if you're using the #awfullycheerfulquestion hashtag on Twitter, or Facebook, you can get a free copy of the Awfully Cheerful Engine RPG by Morrus as well!

Mimics, An Unnecessary Work: A Needless Interview With Philip Reed