Level Up (A5E) How come there aren't any guidelines for creating a new culture in A5e?

The Adventurer's Guide for A5e has sidebars on how to create a new Background (p. 75) and a new Destiny (p. 96). But there is no sidebar for creating new Cultures. Why is that? The nice thing about the sidebars for creating a new Background or a new Destiny is that they are simple and easy to use. They reduce the amount of guesswork a Narrator or a Player has to go through if they wanted something outside of the Backgrounds and Destinies already provided in the Adventurer's Guide. It's strange that A5e isn't lending a helping hand for making a new Culture.

That said, has anyone homebrewed their own cultures since they got A5e? And if so, what did you come up with? curious

I believe you’re looking for this: DriveThruRPG.com

The reason there’s no sidebar is because cultures are too complex to reduce to a sidebar. Backgrounds are pretty formulaic. Cultures are wild!

xiphumor said:
I believe you’re looking for this: DriveThruRPG.com
Click to expand...

That's unofficial though. I'd love to see some official guidelines.

It’s about as close to official as you’re going to get. Peter Coffey helped write A5e, after all. And besides, I don’t imagine anything “official” could be much better! It’s a fantastic resource!

xiphumor said:
It’s about as close to official as you’re going to get. Peter Coffey helped write A5e, after all. And besides, I don’t imagine anything “official” could be much better! It’s a fantastic resource!
Click to expand...

From what I understand from what they themselves said on the podcast, that work was limited to rewording some SRD spells. They had 'lead designers' and 'general designers' and the former did the design work. PJ Coffey was one of the latter.

Not to disparage the work at all. It's all important work, and I'm sure the book is fine. But I'd still like to see something official which the lead designers had at least looked at!

Supporter
PJ Coffee, Anthony Alipio, and Peter Martin worked together to create that book. All three were designers on A5e. And while no one of them can claim authority on creating A5e (for many reasons) all of them, and everyone else, had insights and inputs and ideas that get folded into things.

I'm a freelance writer with a few articles under my belt and part of an adventure that hasn't seen the light of day. Eventually I wrote up some feats and some cultures for the Voidrunner's Codex...

I'm also part of the reason it is -called- the Voidrunner's Codex. Because on the discord there was a discussion of the name back in January. The original tentative title was "Starfarer's Guide" but people were concerned it was too close to "Starfinder".

Some other suggestions: Pulsars and Parsecs, Spacefarer's Guide to the Universe, Spacefarer's Guide, Space Jaunt, Sidereal: the Astronomical Roleplaying Game, Star Wanderers, Void Voyage, Void Journeys, Into the Void, Traverse the Universe, Into the Stars, Slice the Void, Cross the Void, Void Jumpers (Void was a popular term once it was struck upon), Mercenaries and Meteors, Cosmos Chronicles, Beam Up, Void Chronicles,

... and then I came in and started talking about titles that already exist. Babylon 5, Farscape, Firefly, The Expanse, The Orville, Lost in Space, Andromeda. How they were often singular narrative concept name and compound words.

I prompted people with questions about objects in the book that could be used as names. Narrative-specific concepts we could key off of. The book is meant to be Setting Agnostic, so all those Narrative Conceits went out the window which narrowed things down a LOT. Stellar Verge, Star Verge, and Void Verge were suggested.

Then I tossed out "Voidrunner's Guide" as an idea. Why? Planescape, Spelljammer, Starfinder, Farscape, Firefly, Bladerunner, Battlestar. Kennings as naming convention.

We threw out other names. Light-Speed Mythos, Nova Chronicles, Cosmos Report, Betwixt Starlight (My only other offering and really bad in hindsight!). We started organizing a poll for people to pick their top five names out of the full list which is when Russ popped in and said he liked Voidrunner.

Then I grabbed a font. Sui Generis. And threw the words into it.

People liked that... but ultimately felt we needed to move away from "Guide" since the Adventurer's Guide and Dungeon Delver's Guide also had that term. And so Peter Martin suggested Manual and Codex. Andrew Engelbrite thought Codex sounded "Spacey" and so... 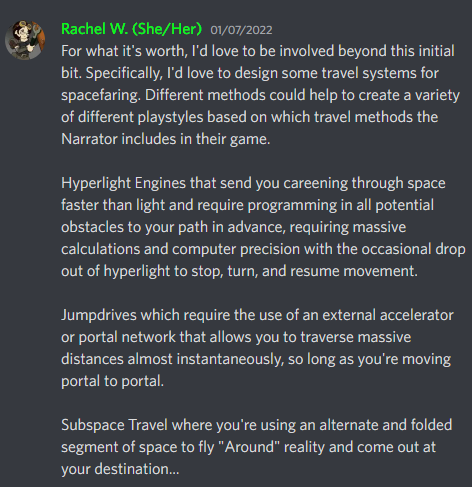 ... I wasn't even a -part- of the process. I wasn't given a role or a job or anything. I wasn't part of the "Naming Committee" or anything similar. I was a Freelance Writer who had access to the main general channel for the VRC because Andrew Engelbrite was considering using me to write things for the book. Because Peter Martin and others recommended me to him.

Just because someone's Editing work was only on a few spells doesn't mean they didn't have a profound effect on other aspects of the book.

I was some rando untested freelance writer, and wound up halfway naming the book that so many other people were already working on, just 'cause they liked my idea. And sometimes? That's all it takes. Someone having an idea and sharing it.

Obviously, I can't cite examples of this happening while the core rulebooks were being written... but writers don't write in a vacuum. We influence each other. We solicit ideas and feedback.

While Homebrewing and Hacking might not be official A5e material by ENPublishing, it is the best resource you're gonna get. And it's a resource I use, by the way, when making official content.

(Note: This is not me trying to "Take Credit" for the name of the book or anything. It's not my book. This story is only to illustrate how people can have an impact on each other's work even if it wasn't assigned to them)

Steampunkette said:
While Homebrewing and Hacking might not be official A5e material by ENPublishing, it is the best resource you're gonna get.
Click to expand...

Actually, there's a heritage creation system in the upcoming Voidrunner's Codex. That book is next year, though.

Morrus said:
Actually, there's a heritage creation system in the upcoming Voidrunner's Codex. That book is next year, though.
Click to expand...

True! But it doesn't have Culture Creation in it, right?

I co-developed A5e's heritage / culture system. Without going into too much detail, here are some guidelines on creating cultures:

C
Level Up (A5E) What did Level Up: Advanced 5th Edition fix with regards to 5e D&D?

H
Level Up (A5E) Salaries in Gears of Revolution for A5e