With the Spring holidays upon us, we decided to make an Easter dish that also happens to be a halfling meal from Heroes’ Feast: honeyed ham with pineapple gravy. 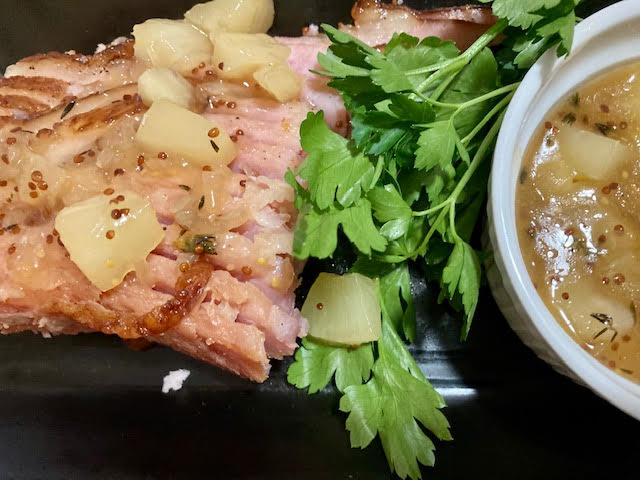 There are several meals in Heroes’ Feast that are modern staples transplanted to the fantasy world; in some cases, this is because the meal itself is timeless and continues to be served in the modern day, while in other cases it’s because the food itself is now so popular that players might be expected to eat it (even if there’s no historical justification for it to exist). In the case of honeyed ham, this is a dish that goes back centuries:

The word ham derives from the Old English hamm and refers specifically to a cut of meat from the hog's hind legs. China takes credit for curing the first pork leg back in 4900 B.C. Enthusiasm for ham spread throughout ancient Europe with the Romans, who likely learned of the practice while trading with the Chinese. A surprisingly workable recipe for ham with figs survived from the second century when it commanded attention on ancient banquet tables. The Gauls produced precursors to the contemporary world's renowned Bayonne, Black Forest, and Westphalian hams.
Click to expand... 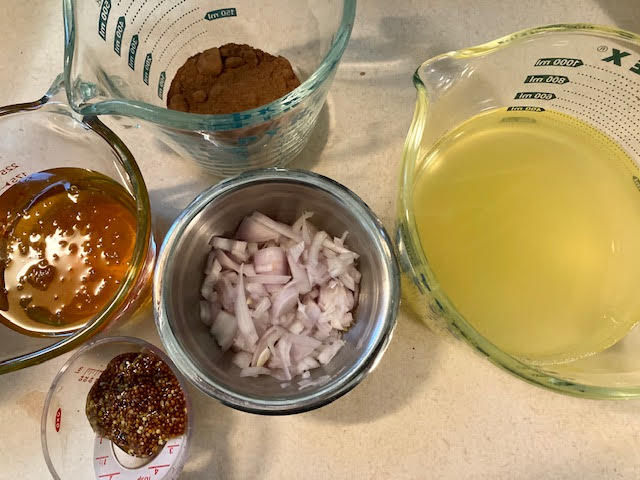 Like some of the other dishes in Heroes’ Feast, this meal is not one you simply whip up for your players just before they arrive. The ham has to be removed from the refrigerator for two hours before you even cook it, and then bakes for another three hours after that.

Once it’s taken out of the oven, there’s a lot of basting with pineapple juice. This is definitely an art that isn’t for the impatient, as the juices actually require more effort than the ham itself. You’ll be taking things in and out of the oven frequently. And that ham is HOT, so be careful!

Overall, I’m a fan of pineapple while my wife is a fan of ham. If you like pineapple flavor, this is a great staple to add to holiday meals. But if you’re not fond of the taste, this meal won’t make any converts. 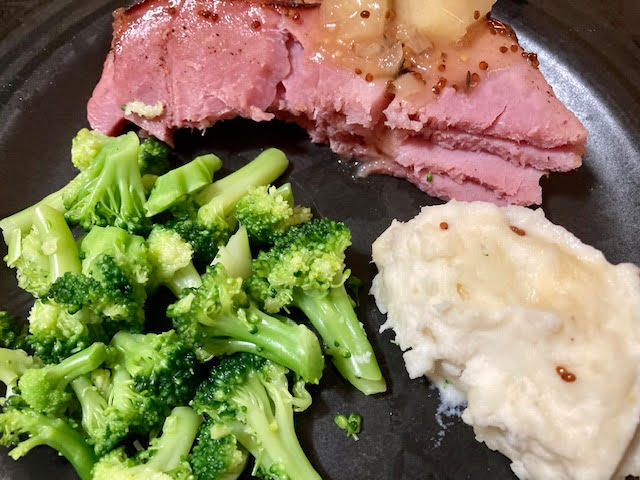 With ham's history as a reliable staple of meals in medieval times, it’s perhaps no surprise that halflings claim ownership of this dish in Heroes’ Feast:

When it’s time for a holiday feast, honeyed ham is the first dish in a halfling’s oven. A large ham is brushed with layer upon layer of a local honey, brown sugar, and pineapple juice glaze for maximum sweetness before being set in the oven. And while the simmering scent of slow-cooking pork fills the homestead, a halfling gets to work on the accompanying pineapple gravy, a chunky and tangy sauce to drown your beast and starches in. It should be noted that this recipe goes just as well with wild boar, if you’re inclined to catch one.
Click to expand...

There’s a reason that wild boar is mentioned, and it’s because it’s a bit more exciting for PCs to hunt if they’re so inclined:

The consumption of boar goes back thousands of years. A wild boar was highly prized in the Classical world, and in the Middle Ages, it was a favored quarry of the hunt. Virtually all parts of the boar were eaten, including its liver, stomach and even its blood, and it was considered so tasty that it was the aim of some recipes to make the meat and innards of other animals taste like that of boar. A boar's head was often the crowning meal of a Christmas feast.
Click to expand...

Given how fierce and tasty boars were in the Middle Ages, it’s surprising that Dungeons & Dragons doesn’t feature more variants: just the boar, giant boar, and wereboar. If you’re being generous, the nalfeshnee is also boar-inspired (at least, the head is). Perhaps the nalfeshnee acts as the role of boar for certain powerful extraplanar beings.

Hunting boars is a time-honored tradition by many cultures. In medieval times, it wasn’t so much for eating as it was a test of skill:

Unlike the Romans for whom hunting boar was considered a simple pastime, the hunting of boars in Medieval Europe was mostly done by nobles for the purpose of honing martial skill. It was traditional for the noble to dismount his horse once the boar was cornered and to finish it with a dagger. To increase the challenge, some hunters would commence their sport at the boars mating season, when the animals were more aggressive.
Click to expand...

The target of the hunt doesn't even have to be boar-adjacent--just a creature deadly enough that hunters are interested in testing their mettle against it. There's plenty of monsters in D&D that fit that description, from chimeras to manticores.

For halflings and the modern table, the docile ham is just fine. But for adventurers who want to add spice to their meal, a boar hunt may be just what the DM ordered.

Your Turn: Have you ever run a hunt in your game?
Click to expand...

Mike "Talien" Tresca is a freelance game columnist, author, communicator, and a participant in the Amazon Services LLC Associates Program, an affiliate advertising program designed to provide a means for sites to earn advertising fees by advertising and linking to http://amazon.com. If you like what we do here at EN World (the Forums, Columns, News, etc.) and would like to help support us to bring you MORE please consider supporting our Patreon. Even a single dollar helps!
S

I absolutely love ham. Sadly, I don't like honeyed ham or any other form of sweet ham, so chances are I wouldn't like the pineapple ham. Still, I could easily imagine something like this on a fantasy table.

Also, you've got to do something about those sides. I'm a big fan of broccoli, but how about a quick saute to give it some more plate appeal?

Schmoe said:
Also, you've got to do something about those sides. I'm a big fan of broccoli, but how about a quick saute to give it some more plate appeal?

I was thinking the same. Sauté it in some balsamic vinegar with some garlic, onion and bacon.

I have to say; this article is quite BOAR-ing!

There was a thread on the old WotC forum to the tune of "What Do First-Level Characters Do All Day?".
Now we have an answer: (borrowing from a Bugs Bunny cartoon) " Cook, bring me some hausenpfeffer !" So the Cook turns to the PCs and says, "here's what I want you to go out in the woods and catch..."