I Spoke To Frank Mentzer About His Empyrea Setting For 10 RPG Systems!

Frank Mentzer's Kickstarter for his Worlds of Empyrea setting launches next week. With a pantheon of TSR luminaries and a setting designed for ten different game systems, this project is truly ambitious and epic scope. Frank was kind enough to talk to me about his plans! 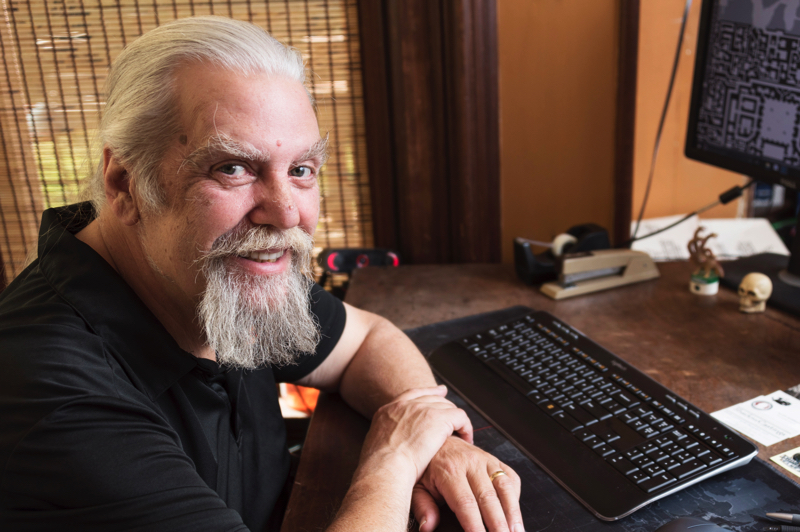 As a short preamble, for those who don't already know, Frank worked for TSR in the 1980s and was responsible for the famous Red Box (and ensuing BECMI editions) of Dungeons & Dragons. He's an integral part of D&D history, also behind such iconic products as The Temple of Elemental Evil. The Empyrea setting was conceived back in the days of TSR, and has been developed ever since.

Thanks for taking the time to talk to me about your upcoming project, Frank. It sounds ambitious, and I'm excited to see what you do with it. For those reading about this for the first time, could you briefly describe what Empyrea is?

Empyrea is a backdrop. Your game is about your characters, using your system. We offer it as an option, a second home. Use it occasionally, perhaps as an ‘alternate reality’, or start a whole new story. It’s easy to add and to learn. Pressures and crisis will soon arrive, once the players are at ease in Empyrea.

You have mentioned that you plan to produce boxed sets for up to ten separate game systems (D&D 5E, Pathfinder, Runequest, Savage Worlds, DCC, C&C, S&W, HackM, D&D BECMI, or 1E/2E). Could you speak a little on why you are launching with such a broad palette?

Eight of them are the same game, really: 3 D&D editions and 5 D&D Licenses (OGL). In every case we sit around tables, play character roles, and slay monsters. The real design challenges are in Savage Worlds and Runequest (my second-ever RPG and the first good skill system). In both cases we’ll work closely with the creators and publishers, Pinnacle and Chaosium, to fine-tune the approach.

When designing for so many systems, what sort of differences or assumptions will each individual "version" need to address? How similar/different will each boxed set be?

For 40 years a simple formula has applied. You design a game system, you place it in a dedicated Setting. Empyrea is not designed ‘for’ systems at all. It’s designed as a backdrop for your character stories, not to show off a game system. In an adventure you can’t separate the system; in fact, the best adventures highlight the best of the system used. In a setting, however, we can and will segregate the ‘crunch’, all the game-specific details, into one System Book in each set. The rest of the contents are the same. Pick your system when ordering, and add other system books if you wish.

You have an epic lineup of talent for this project, drawn from the legacy of TSR and D&D. Writers like Ed Greenwood, "Skip" Williams, Margaret Weis; artists like Clyde Caldwell, Larry Elmore, Erol Otus; I won't even begin to try to list them all! How did you go about gathering all this talent under one virtual roof?

I just wanted to publish my ol’ fantasy campaign but thought it might not have enough appeal, alone. First I asked some artist friends, then some writer friends, and it escalated, like remembering who to invite to a party. I’ve been lurking about for 35 years, and have a lot of professional acquaintances in the field.

You have mentioned that Empyrea is part of the same planet as Greyhawk. Is that something you will mention in the books themselves, or is that being left as something only the more widely read will know?

In the preface for RPGA adventure R-4 “Doc’s Island”, I wrote an historical background for the events of the “Egg of the Phoenix” saga. It placed my continent (and campaign) on the same planet as his, though far away. That has to be approved of course, and Gary did so, casually scribbling on a memo dated 17 Dec 1982. We’ll include these and other historical tidbits in the set, showing how it started in 1977 with a Judges Guild map (from Wilderlands of High Fantasy) and grew. But that’s real-world history, and not part of the setting itself. Greyhawk and other great fantasy lines belong to others. We don’t need to play with their toys.

Obviously you're well known for your Red Box version of Dungeons & Dragons. Do you still play that edition? Do you enjoy later editions of the game?

Every Tuesday evening I run another game of Empyrea, in a plain chatroom, using a hybrid 1e/2e/BECMI rules mashup. I’m big on the many non-D&D fantasy games too, like RQ and Savage as I mentioned. All games have their great points. I’ve written some published adventures for Pathfinder and have tried 5e, Fate, Burning Wheel, and more. It’ not a big deal; I’m just a gamer.

Since the 1970s, what changes in the way tabletop roleplaying games are designed have you noticed? If you were to approach the Red Box again, would you do anything differently?

For Basic (red box) I’d cap it at level 20. Few ever use the high-level materials, and the thief progression is all wrong when spread out for 36.

Historically the obvious breakpoint is 2000. Wizards of the Coast had just acquired all the TSR assets. They wanted to make it legally easier for fans to write and distribute D&D material using the internet. And so the Open Game License (OGL) was born, and OSRIC was the first game to use that to rewrite rules, and a legal precedent was set, and the entire landscape emerged. Pathfinder is the biggest example of an OGL product line.

The core games of D&D and OGL variations have become very complex since 2000. Fantasy roleplaying contains excitement and intrigue: thrilling contests and combats, devilish mysteries and situations. Over time we have focused more on the exciting (combat) than the rest, and the rules evolution reflects this. My new Empyrea setting pushes back, offering rich scenery and epic meta-plots, while leave the style (and system) to the individual gaming group.

Thanks so much for talking to me about Empyrea. I'm sure we'll talk again soon about it! Good luck with the Kickstarter - it's going to be exciting to watch it all unfold!

As a long time BECMI fan, I am really looking forward to this!

Super looking forward to this.

As a long time Greyhawk fan it's great to get more content for that planet, even if it isn't "official" in the strictest sense.

Frank has really assembled a great collection of talent here, and I look forward to backing this. I was a little concerned when I heard how many systems he was trying to support, but the strategy he describes seems workable.

I love this attitude.

Dr. Mentzer, sir.. Any chance we could get some details?

So 10 different boxed sets, each with the rules-neutral setting material and a book with the system-specific crunch. I wonder if it would be more profitable to do a single boxed set with only the setting material at a lower price and sell the crunch books separately with a price equal to how much the boxed set price was reduced.

After all, it would be much easier to just reprint the crunch books if one sells better than expected than to have to make more boxed sets if not enough are made to meet demand for a specific system. This also prevents ending up with a glut of boxed sets for a system if expected sales are overestimated too much.

rknop said:
I love this attitude.
Click to expand...

Years and years ago, a buddy of mine made a documentary about RPGs. When he interviewed Gary Gygax, my friend asked him to introduce himself to the camera. Gygax said, "I'm Gary Gygax, and I'm a gamer," and half-smiled. He'd probably used that line a thousand times, but I thought it was just perfect.

The Kickstarter page is live!​

(And I still if you build a setting and adapt the rules to it, you end up a blander world than if you picked a system and developed a world as if the rules were that world's laws of physics. Mystara wouldn't be Mystara if it had been built with AD&D and not BECMI. The later 2e-ed version sucked all the uniqueness out of it.)

This sounds awesome! Can't wait to check out Empyrea!

Just an extra $10 to add in extra game systems. Between 7th Sea and this, looks like the Credit card will have some work to do in 40 days time.