Chaosium founder Greg Stafford passed away yesterday at the age of 70. An iconic game designer, he was known for the world of Glorantha, Pendragon, RuneQuest, the Ghostbusters RPG, and much more. Our thoughts and sympathies go to his friends, family, and co-workers. 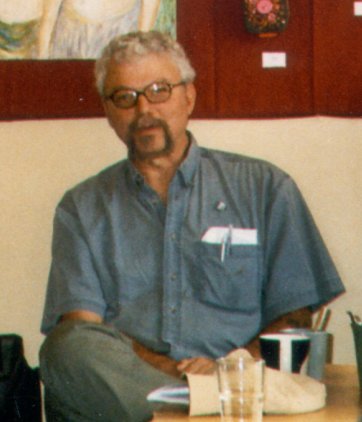 Stafford founded Chaosium in 1975. Chaosium report that he passed at his home, and that his passing was painless.

This is such a huge loss for me.

Not just his own works are so amazing but everything his company did to take RPGs and supplemental material to the next level.

Truly one of the greats of the RPG industry. His games are responsible for so many happy memories of weekend-long gaming sessions during my younger years.


What an amazing legacy of work he leaves us.

The passing of a legend and an era.

May Issaries guide him home. R.I.P.

A great loss. My first time GMing was actually with Runequest.

My childhood in rpgs started with D&D but really grew wings with RuneQuest when it was first released.

Greg's passing makes me feel old, although, it must be said, he wasn't.

The word 'visionary' gets overused in our world of Instagram hyperbole - but Greg invented the first skills based rpg with realistic combat and imagined a world like no other before or since in the form of Glorantha.

He was a visionary.

A truly sad loss for everyone who ever let their imagination and a handful of dice transport them and their friends to other worlds.

Supporter
Fond memories of playing Runequest back in the late 1970s. The man was creative and I loved that Runequest was the first table top rpg where we had an active combat system of parrying, dodging and blocking. So different from DnD at the time. What an interesting and creative person he was.

Greg Stafford is a gaming god - the hobby wouldn't be the same without his influence on it. He will be genuinely missed.

Sad news. I never played in Glorantha, but I played a lot RuneQuest. A great person´s gone.

We lost one of the greats. Vale Greg.

This is very sad news. Stafford was a giant. Pendragon is a masterpiece.

I've played a bit but not a lot of RuneQuest, but it's undoubtedly a great game.

Greg Stafford really had a vision of what a RPG could be beyond wargaming and funny voices.

I GMed a session of Prince Valiant this afternoon. The players each had a "Storyteller Certiificate" from the previous session, and the first episode of the session involved a very strong knight - the self-proclaimed "best in Britain" (I borrowed some dialogue from when Arthur fights Lancelot in the film Excalibur) - who would let no one pass on the road from Castle Hill to Norwich (? something like that, to the north on the Pendragon map) unless defeated in battle by a knight who he would then accept as his lord.

The first PC knight had a go and was soundly beaten (but kept his certificate). The second had a go, and was persuaded by another player to use his certificate for a minor (but renewable) buff, and likewise was beaten. The third martial PC was in fact a mere squire, and weaker in combat than the other two, but (i) was able to persuade the NPC knight to knight him so that they could fight an honourable joust, and (ii) used his certificate to Slay a Foe in Combat, and so was victorious and won the NPC's horse and arms by his victory. This made him the first PC to have a full-fledged warhorse and heavy armour. He also gained a jewelled sword that grants a prestige bonus to appropriate Presence checks.

The next episode involved aiding a damsel in distress, fleeing from robber knights - the third certificate got spent in this one to help secure victory, and the upshot was that the PC who started the session as a squire ended up being wooed by the damsel - daughter of the Duke of York - and marrying her: when they arrived at her castle, he found that he couldn't say no to her father, who was strongly in favour of the marriage (failed Courtsie check on the player's part). So the PC started the session as an under-equipped squire and finished it with the full arms and steed of a noble knight, the son-in-law of the Duke of York with the wedding gift of a fortified manor house, and a reputation as the one who slew the strongest knight in Britain.

I'm coming more and more to enjoy a system (Prince Valiant isn't the only one, but is a good example) where we can get through that amount of content in a single session.

I GMed a session of Prince Valiant this afternoon. <snip> I'm coming more and more to enjoy a system (Prince Valiant isn't the only one, but is a good example) where we can get through that amount of content in a single session.
Click to expand...

It can be a delicate balance to strike with speed vs. detail level. A lot of games seem to really struggle with that and often end up far on the side of detail, partly because I think it's much easier to write detail and options than it is to design for speed. High level 3.X and 4E D&D were two examples of popular systems where slow speed really got in the way of the action. While their core systems were pretty lean, too many options, modifiers, etc., turned them into the RPG equivalents of ASL, although I think nothing in the RPG world outside of some fantasy heartbreakers really beat Exalted 2nd Edition for excessive detail. Of Stafford-designed or -influenced games, I only ran Stormbringer (with some options) for a while as well as having played some CoC. I recall it being fairly quick though in general active defense rolls are things that need to be watched for slowdown. I'm not sure the general Runequest/CoC system was particularly suited for Stormbringer, though, but that's another story. I doubt it would ever happen but I'd love to see a Modiphius 2d20 system version of Moorcock's worlds. I think it would do an admirable Fafhrd and the Grey Mouser, too. Threat-Momentum reads weirdly but plays very well and captures the dramatic setbacks of pulp-oriented stories very well.

Sepulchrave II said:
This is very sad news. Stafford was a giant. Pendragon is a masterpiece.
Click to expand...

I never had the chance to play it it but it had a ton of good ideas.

One of the truly great RPG designers who was far ahead of his time. He will be greatly missed.