Investigating Tales From The Loop

Teenagers investigate weird mysteries in the Tales from the Loop RPG. Created by Fria Ligan (Free League),Tales is a full-color 194 page hardcover available in print and PDF. I received a complimentary copy of the game. My plan is to not allow that to bias my review. 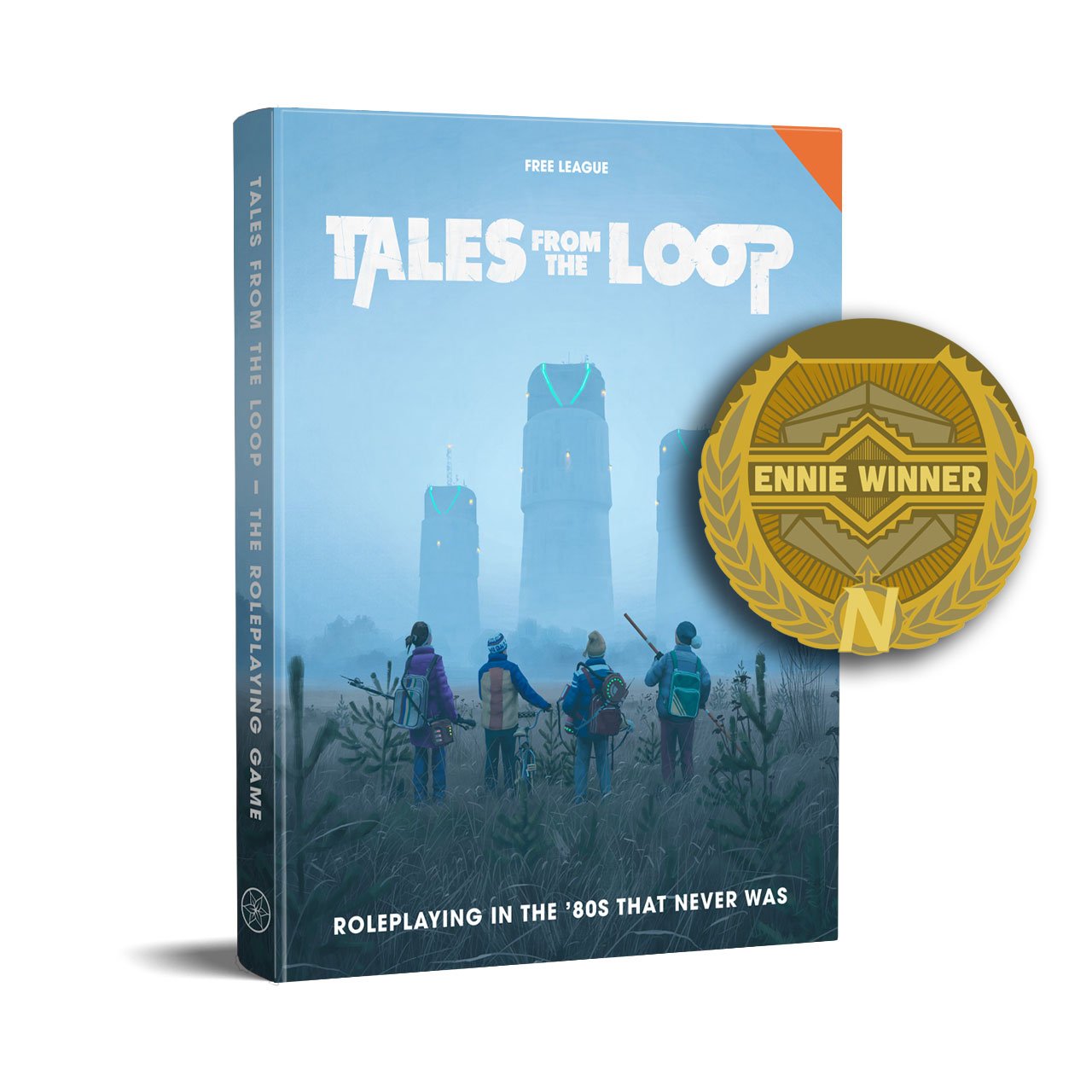 A session is built as a collection of scenes and Trouble for the Kids to overcome. GMs share creating scenes with the players. The GM also asks the players questions to help fill in details about NPCs and the setting.

The players liked setting scenes before and after investigating the mystery. The detailed drives and relationships helped them roleplay teenagers. They fell into character easily, giving the other PCs a hard time and trying to avoid bigger kids and aggressive adults.

Extended Trouble required all the Kids to work together to achieve several successes to win in the final showdown. They had to take down a mad scientist. Some of the Kids went after the killer birds he was controlling, some tried to hijack his tech, and others tried to stop more birds from joining the battle. It was tense and exciting and everyone took part.

Well detailed examples of what kids did in the ‘80s ground players in the setting. Art, locations, maps, NPCs, diagrams, and even in game advertisements detail the setting. The alternate history receives a thorough description.

A four-part adventure campaign is filled with mysteries, NPCs, creatures, maps, and locations. Tales supports sandbox campaigns with six detailed locations that the PCs can investigate on their own as they see fit. I really like the inclusion of both sandbox and adventures alongside an option to use both together. Role-playing a talking pigeon was enjoyable. Tales notes that pre-gens are included but are not. Tomas from Fria Ligan stated the space was used for other things, but the pre-gens may return as a free PDF.

Our session did not feature robots or magnetrine tech, both heavily featured in the art, which one player wanted to experience. If I ran a one-shot again, I would use the adventure focusing on robots. I didn’t think I would like GMing an RPG about young teens, but the one-shot I ran changed my mind. I recommend Tales from the Loop if you like the idea of investigating weird mysteries using a tightly designed and evocative RPG.

This article was contributed by Charles Dunwoody as part of EN World's Columnist (ENWC) program. Please note that Charles is a participant in the OneBookShelf Affiliate Program, an affiliate advertising program designed to provide a means for sites to earn advertising fees by advertising and linking to DriveThruRPG. We are always on the lookout for freelance columnists! If you have a pitch, please contact us!
Last edited: Jun 7, 2020
Click to expand...

And don't miss Stålenhag's wondrous art books that started it.

Tales from the Loop and Things from the Flood. (Also from Fria Ligan/Free League.)
They are very enticing and inspiring, visually naturally, but also the stories.

Tales from the Loop and Things from the Flood. (Also from Fria Ligan/Free League.)
They are very enticing and inspiring, visually naturally, but also the stories.
Click to expand...


I agree. That art is found throughout the RPG. Having more of his art would add to your campaign.

I get some of the differences as far as setting but what is the attraction of playing as kids? What makes that important to the game to the point that it's a requirement to stay in a specific age range and in a stereotypical social category?

[MENTION=4650]Lord[/MENTION] Blacksteel That's what killed it for my group. I had pledged for it during the KS, but my group (that consists of 40 year olds) just couldn't get into it, so I backed out.

Lord_Blacksteel said:
I get some of the differences as far as setting but what is the attraction of playing as kids? What makes that important to the game to the point that it's a requirement to stay in a specific age range and in a stereotypical social category?
Click to expand...


Kids feature in the artwork on which the game is based. The game takes on a Stranger Things vibe.

What is interesting is no death and very few if any guns. In the one shot we played, the players had to think way out of the box.

Also, the roleplaying came easily. Lots of smack talk and one upmanship. The rich kid named he poor kid Pov for example. Pov being short for poverty. It took us all back in time.

Investigate Tales from the Loop in the Starter Set