A pity nobody voted for the Iron Kingdoms Requiem as The Most Anticipated Game.
Actually, not enough people voted to make it win the top 10 (instead people brought back Dune). 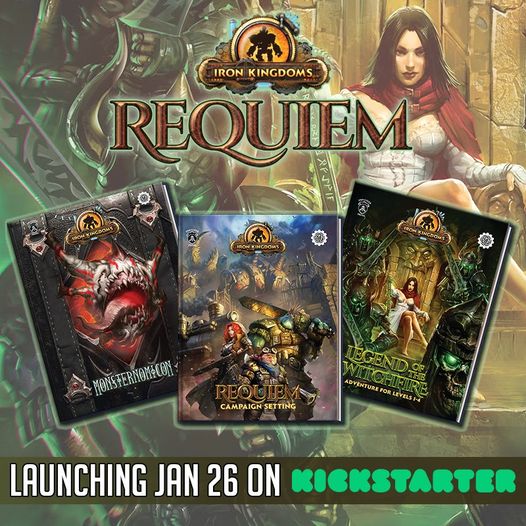 Iron Kingdoms Requiem is going to be set in the years following the Infernal Claiming if you want to work out the timeline for your games although of course, you could play around with that to suit your own adventures. However, the core of the book and its narrative will be around the nations of Western Immoren attempting to rebuild from "the ashes of a sundered continent".

Alongside the core book which will offer up all of the options you need to put the Iron Kingdoms stamp on 5th Edition, you'll also have a full adventure for characters levels 1 to 4 called the Legend Of The Witchfire.

As well as the new adventure module you'll also find the Monsternomicon which will be packed with Immoren-specific beasts and a whole bunch of new fiends that you might not have seen in the Iron Kingdoms before.

This is definitely on my list for most anticipated games for 2021. Together with the Symbaroum 5e this is shaping up to be a year of awesome possibilities.

Well I guess this is another Kickstarter I'm backing.

I'm interested, but I've got no idea how you could possibly integrate warjacks or warbeasts with a level-based system (when PC's can potentially buy, build or scavenge sidekicks that are tougher than they are). Also, I'm holding off until I know how much the "demon invasion" metaplot nonsense has leaked into the presentation of the setting.

I'm hyped for the Gun Mage class in this, but knowing my luck it'll turn out crap.

I feel curiosity about new PC races and classes.

Kickstarter is live and funding fast. Early bird is $100 for the whole lot.

Yeesh I was gonna say 16 days is too little of a window, but mother of mercy it's almost funded.

Weiley31 said:
Yeesh I was gonna say 16 days is too little of a window, but mother of mercy it's almost funded.
Click to expand...

Well, I've backed the Early Bird. I hope they are on time and no delays happen. Cuz I really want that Gun Mage class. 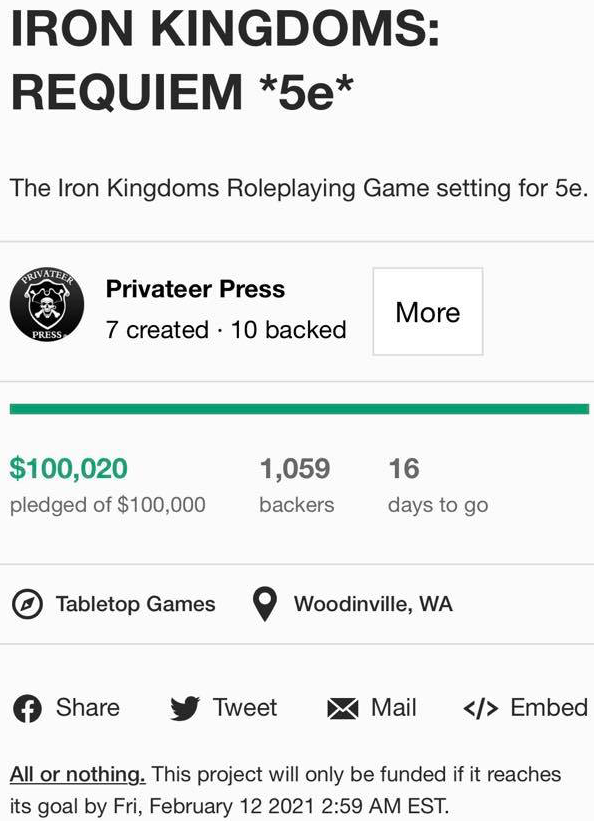 I backed this and the recent Savage Pathfinder KickStarter. I know Savage Worlds KS's usually release the PDFs shortly after the KS completes, often with a version for backers to help proof before they're sent for printing. I wonder if Privateer Press does the same, or if they'll release when the books ship.

Sir Brennen said:
I backed this and the recent Savage Pathfinder KickStarter. I know Savage Worlds KS's usually release the PDFs shortly after the KS completes, often with a version for backers to help proof before they're sent for printing. I wonder if Privateer Press does the same, or if they'll release when the books ship.
Click to expand...

I backed both too. My New Year Resolutions are already shredded and it is still just January ending.

Hopefully, nothing else this popular and significant comes along before year's end.

I'm certainly going to back it - I love the Iron Kingdoms, and even though i have reservations about how manifestly unbalanced character archetypes like warcasters can fit into a 5e game, I'll give it a go anyway.

I have to say the stretch goals are a bit underwhelming so far though.

The first but probably not the last KS that I will back in 2021. Longtime fan of the Iron Kingdoms since back in 3e days. Cannot wait to get the Monsternomican updated for 5e. My players beware!

Okay: I'll admit I wasn't expecting to see a number of Archons in this. And since I was always big on Archons in 3.0/3.5, I now have a means of adding em back thanks to this and Theros.

And one could reskin Corvis, the City of Ghosts as Manifest.

Looks like it's coming with its own Character Creation rules too.


As an option. Sounds interesting, and probably could be used in other 5E games:

"We'll be offering options for original character creation, as well as an alternate system known as Essence. Essence will allow a player to choose a physical or mental archetype such as "Mighty" or "Intellectual" or "Agile" that replaces normal benefits associated with playing a specific race, and uses the Essence benefits instead. So if you want to play a Mighty Gobber, or an Agile Ogrun, or maybe even a Pious Rhulic Dwarf, you will have those options as an alternative."

I literally just made a Kickstarter account just to get the earlybird.

This....or The One Ring next month. Not sure I should do both. Twitch. I am about to do some heavy duty rationalizationing. I mean this is for 5th edition which I know I can get my group together to play, where a different system is a hard sale (due to us only gaming a few times a year). The One Ring will probably be adapted to 5th edition in the future, so I could wait. And Privateer Press has some awesome production values.

And if a back this, I certainly need to do it quickly to get the Early Bird special, right?