Is TOMB OF HORRORS the Worst Adventure Of All Time?

Prevailing opinion here in the EN World community has traditionally held that the worst adventure module of all time is 1984's The Forest Oracle. 7th Sea designer John Wick (whose upcoming edition of 7th Sea is the third most anticipated tabletop RPG of 2016) vehemently disagrees; he nominates the classic adventure Tomb of Horrors for that position, contending that it "represents all the wrong, backward thinking that people have about being a GM." In an article on his blog (warning: this uses a lot of strong language), he goes into great detail as to why he hold this opinion, stating that the adventure is the "worst, &#@&$&@est, most disgusting piece of pig vomit ever published". 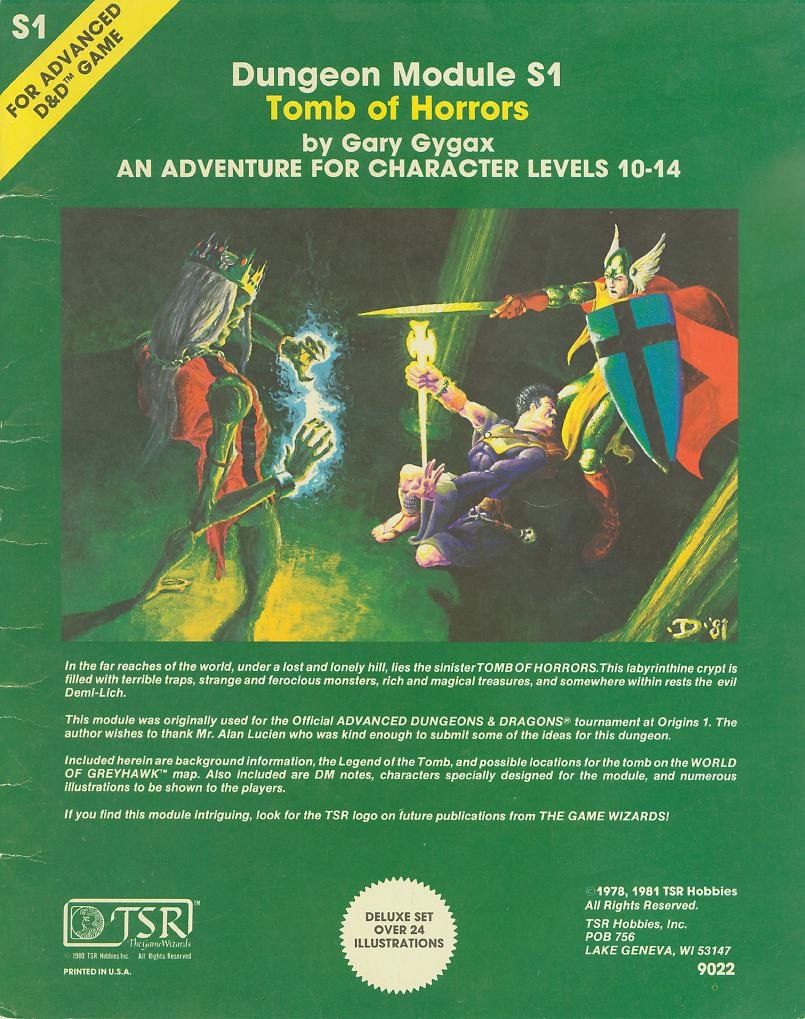 [lQ]"My players picked the entrance with the long corridor rather than the two other entrances which are instant kills. That’s right, out of the three ways to enter the tomb, two of them are designed to give the GM the authority for a TPK."[/lQ]

Very strong words, and you can read them all here. As I mentioned before, there's lots of NSFW language there.

The article also includes an anecdote about a convention game in which he participated. In that game, being already familiar with the adventure and its traps (and having advised the DM of this), he played a thief and attempted to discover or deactivate the traps, up until a near TPK occurred and he left the game.

Wick is, of course, no stranger to controversy. A couple of years ago, he created widespread internet arguments when he stated that "The first four editions of D&D are not roleplaying games."
Click to expand...

It's a good module for a specific playstyle. For other playstyles, not so much.

It obviously doesn't fit John's style and I think he makes it clear why.

I guess its fun if you're fond of the meatgrinder playstyle, but I hate that kind of playstyle.

And I also hate the stupid demon face. That's dumb.

Well, apparently 51% of ENWorld members in 2006 thought it was badly designed. I doubt that percentage has changed all that much since then.

Personally, I've never played or run S1. However, I very much doubt it's the worst adventure of all time - certainly, it's got a long way to go before it matches "Scourge of the Howling Horde" with it's grey-text-on-grey-background failure, or the adventure that finally persuaded me 4e wasn't for me... "Tomb of Horrors".

This is a horrible adventure to spring on a bunch of 10-14th level characters who had been developed slowly over the course of many, many hours of adventure.

But this is not meant to be an adventure to spring upon your long standing adventuring group. It is a tournament module meant to be used against numerous groups all competing with one another for which group got furthest, normally with quickly generated characters in which the gamers have little emotional connection. It is meant to be cruel, with a lot of dark and malicious deaths and other twisted fates like the loss of limbs, equipment loss, and gender swapping. Even solo characters can get deep in using summoned creatures, retainers, and laborers, as was common in 1st edition. Because of this, it is one of the best tournament modules ever published and is a classic I am quite proud to own.

Tomb of Horrors is a product of a different era in gaming. Would I want to play one of my favorite characters in it? Heck, no. Would I want to grab a bunch of pregens and see how far we can get in it? Absolutely!

John Wick was probably the player in his group (and there was always one) who stomped out of a session when he didn't get his way. Gary Gygax hurt his precious little feels and now he's burying a dead guy's work.

It's a high level DCC funnel in my mind. Very fun. But yea, if your players have a deep connection to their characters and they only have the one and your group is dead set against making new high level characters, then maybe steer clear.

More and more I think John Wicks RPG sensibilities are alien to my own.

Kid today have it easy with their level appropriate dungeons, "CR" and bounded accuracy.

I love Tomb of Horrors, even if my regular DMing style is very different (I avoid putting situations in which the fate of PCs is out of their control entirely).

I think it is one of those things you need to be fully aware what to expect before venturing forth. I've always understood the module is entirely self-aware, and if memory serves it was explicitly created to force PCs to think every step and surprise them with curveballs on every corner.

I think Wick misses the point when claiming it represents the worst and most backwards ideas about roleplaying; most of the tricks ToH uses can indeed be representative of a rather contentious DMing style, but only when used unfairly. I cannot speak for what Gygax's original intent was, but I'm pretty sure he expected players to understand this was going to be the epitome of the deadly dungeon, and that those tricks were going to be aplenty.

In other words, it's like stepping into Splash Mountain and then complaining that the ride sucks because the designers were completely careless about people getting wet. Sure it would suck getting wet in Space Mountain where you are not expecting it, but in Splash Mountain it's kind of in the name.

That was an amusing read.
I wonder if the author ever figured out why he was punched in the face?

He has quite a story to tell about Tomb of Horrors. I think that alone makes it not the worse adventure. The worst adventures are forgettable.

Also the artwork is wonderful. Any module that has Erol Otus art in it is ok by me.

Yeah, this is the guy that claims D&D isn't an RPG, so why does his opinion of a D&D module count?

S1 is not only not the worst D&D module of all time, but it is one of the best.

I'd feel some sympathy and compassion here, but Wick hasn't over the years - including in this article - shown much sign of having learned much since that time.

Or not to point too fine a point on it, I'm not terribly surprised when Wick self-discloses all the jerk moves he's pulled over the years. Nor am I ever any more flabbergasted by the degree of cluelessness on display when he discusses something.

In my opinion, Tomb of Horrors is not meant for at-home campaign play. The adventure was written as a tournament adventure, which was run with pre-generated characters. The early D&D tournaments were competitive in nature; groups earned points based on how far into the tournament they could get and how many tournament objectives they could meet. The entire party could get wiped out and the group might still win the event if they scored enough points. In fact, it was highly unlikely that a group would make it to the end of one of the early tournament adventures without either running out of time first or the entire party getting killed.

In its golden age, TSR needed to print a lot of material: publish or perish. So these tournament adventures made it into print. They weren't written for campaign play. Some, just by chance, were better for campaign play than others. Tomb of Horrors? Not so much.

For my taste and experience, I would not run this as an adventure for an ongoing, long-term campaign. It wasn't written for that purpose, and it doesn't lend itself at all to that purpose.

CNYGamer99 said:
In my opinion, Tomb of Horrors is not meant for at-home campaign play.
Click to expand...


It also makes a great one shot, using one of the parties included in the adventure which in practice is how most people play it.

If you want to include it in a standard campaign, you have several options. One, you could play with a highly experienced team of players with proven tournament skills. Or you could run the module at a couple levels higher than its suggested level with even moderately experienced players. Spell casters of 15th level or higher will largely breeze through the module (consider the impact of 'Find the Path' alone), and if they don't and they earned those levels legitimately then its their own fault. Or you could play the whole thing is a nightmare where death is not permanent, forcing the players to TPK after TPK ground hog day style until they escaped the nightmare.

Of course, the big problem with running ToH these days is almost everyone that is experienced has experienced it.

And well they should.

For a one shot fun game, it's a classic.

For a regular campaign it's an awful piece of badly written garbage.

Celebrim said:
Or you could play the whole thing is a nightmare where death is not permanent, forcing the players to TPK after TPK ground hog day style until they escaped the nightmare.
Click to expand...