*Deleted by user*
Click to expand...
L
Written by

Staff member
There's a new Drizzt Do'Urden trilogy on its way! Timeless, by R.A. Salvatore, will be released as a 432-page hardcover on 18th September for $27.99 as the start of a new trilogy set in Menzoberranzan, the Underdark city of the Drow. 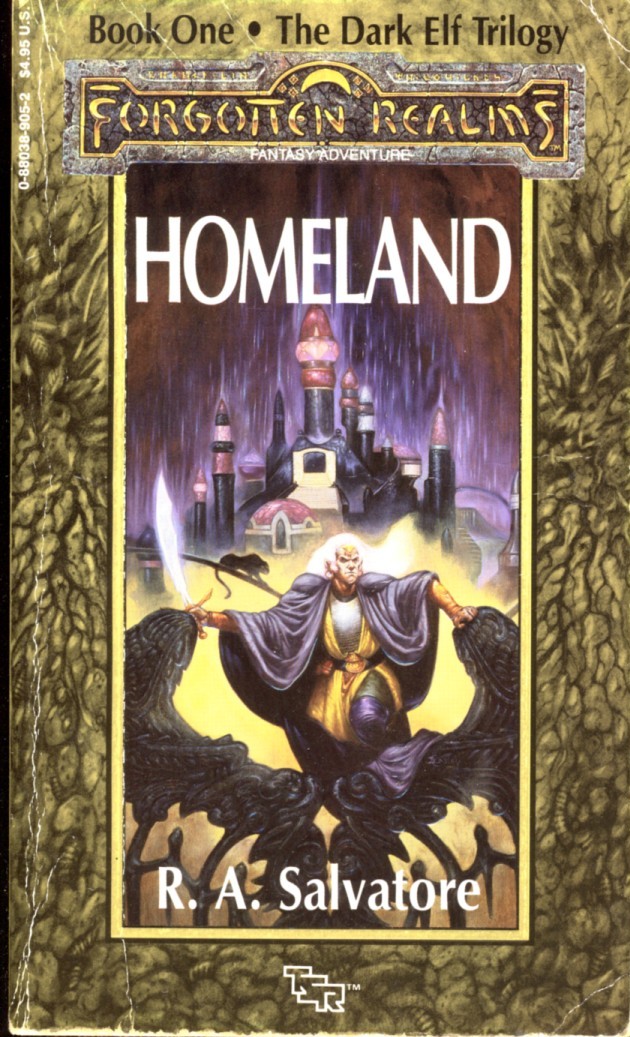 Image of Homeland, the first in the 1990 Dark Elf Trilogy by Salvatore


​
"At long last, New York Times bestselling author R.A. Salvatore returns with one of fantasy's most beloved and enduring icons, the dark elf Drizzt Do'Urden, in an all-new trilogy full of swordplay, danger, and imaginative thrills.

Centuries ago, in the city of Menzoberranzan, the City of Spiders, the City of Drow, nestled deep in the unmerciful Underdark of Toril, a young weapon master earned a reputation far above his station or that of his poor house.

The greater nobles watched him, and one matron, in particular, decided to take him as her own. She connived with rival great houses to secure her prize, but that prize was caught for her by another, who came to quite enjoy the weapon master.

This was the beginning of the friendship between Zaknafein and Jarlaxle, and the coupling of Matron Malice and the weapon master who would sire Drizzt Do'Urden.

R.A. Salvatore reveals the Underdark anew through the eyes of Zaknafein and Jarlaxle - an introduction to the darkness that offers a fresh view of the opportunities to be found in the shadows and an intriguing prelude to the intriguing escapes that lie ahead in the modern-day Forgotten Realms. Here, a father and his son are reunited and embark on adventures that parallel the trials of centuries long past as the friends of old are joined by Drizzt, Hero of the North, trained by Grandmaster Kane in the ways of the monk.

But the scourge of the dangerous Lolth's ambitions remain, and demons have been foisted on the unwitting of the surface. The resulting chaos and war will prove to be the greatest challenge for all three."

Thanks to Matt Adler for the scoop!

Matt Adler said:
Details have leaked, via online book publisher catalogue Edelweiss, of a new Drizzt Do'Urden novel by R.A. Salvatore, to be published in September 2018 by Harper Voyager, the sci-fi/fantasy imprint of HarperCollins.

While plot details have since been removed from that site at Salvatore's request, I grabbed a screenshot:

The URL for Harper Voyager's page also confirms this is indeed a new Drizzt book, the first in 2 years, after previous publisher Wizards of the Coast cancelled their in-house novel line.

Amazon is also listing the book for preorder:

lowkey13 said:
Some cause happiness whenever they appear; Drizzt causes it when he leaves.
Click to expand...


The first reply in the thread.

Well it's nice that it appears FR books are back.

Woot they found a partner publisher! At last! I hope we see more.

Not a fan of his work, but this is interesting. I wonder if the whole imprint has been licensed off to Harper Voyager, or just a one-off with Salvatore. Keeping the D&D brand lean and fighting-fit seems to be the hallmark of this edition.

a young weapon master earned a reputation far above his statin
Click to expand...


I guess he has problems with his cholesterol?

That first trilogy was perhaps the best I've read (later released as the 'Dark Elf Trilogy'). Just loved everything about it. Drizz't however may be "past his prime" so to speak. Not sure if I need ANOTHER trilogy about him but I will withhold judgement until I see the new one.

Did I miss an announcement that WotC/Hasbro had reached an agreement with HarperCollins to continue publishing D&D novels? Because that's kind of big news.

I used to really enjoy these novels... Once upon a time. Then they just began to wander to keep up with the WotC setting changes and I lost my interest. I think I missed the last 9 or so. It would be nice to see them get to a return to form and be enjoyable, but I think too much damage has been done to the brand over these forced changes.

Loved the first trilogy as a teen... but IMO it hasn't aged well... or with grace... both story and writing have not grown with time.

Then again I am old and cantankerous... I've replaced Salvatore with Polansky and Rothfuss, but if any young one finds inspiration in the likes of Drizzt I will not begrudge them that, I know I did!

Cool, been a while since I've read a FR novel but it should be interesting to read about Drizzt's father.

Askaval30 said:
Loved the first trilogy as a teen... but IMO it hasn't aged well... or with grace... both story and writing have not grown with time.

Then again I am old and cantankerous... I've replaced Salvatore with Polansky and Rothfuss, but if any young one finds inspiration in the likes of Drizzt I will not begrudge them that, I know I did!

Alzrius said:
Did I miss an announcement that WotC/Hasbro had reached an agreement with HarperCollins to continue publishing D&D novels? Because that's kind of big news.
Click to expand...

This is the first I've heard; say what you will about Driz'zt, but WotC getting an outsourced partner for new novels is big.


I'm into Abercrombie and Erikson myself. Glen Cook's black company was a good read as well.

Parmandur said:
This is the first I've heard; say what you will about Driz'zt, but WotC getting an outsourced partner for new novels is big.
Click to expand...


It may "just" be a Salvatore-specific license for a specific number of books. I wouldn't be surprised if Harper Collins saw a market for that, or if Salvatore felt like writing another Drizzt book and convinced a publisher to push for it.

But since this was a leak from an ordering system, and its since been taken down, I wouldn't be surprised to find out that this has stepped on some planned announcement that was supposed to be coming down the pike. I guess we'll see when the book gets officially announced if it's part of a whole line of Realms novels or just banking on Salvatore and Drizzt still being able to bring in some bank.

Well I'll have something to get my brother for Christmas at least.

Love the Driz'zt stories. Even after all these years they are a good read.

I read just about everything and to me there is plenty of room for these types of books.

Just because I love me some Abercrombie ,George R.R. Martain, Lawrence and all the rest doesn't mean I don't have a spot for Salvatore on my shelf.