Thanks for looking in!

We broke through our first community goal over at www.patreon.com/jonhodgsonmaps so everyone gets an additional free map! There’s still time to get on board now, and get you that free map! And we’ll have another community goal revealed today...

Here’s a quick rundown of where we’re at right now! We launched on the 19th of June. In just four days we’ve grown to a group of over a hundred patrons. Fantastic!
So what rewards have my patrons enjoyed so far?

First there was June’s map of a hillfort. A 27x32 incher, this bad boy came with an extras version (ruins on the hillfort) too, so that’s 2 Maps for $2.

For those who pledged another dollar, they also enjoyed a variant map of the hillfort, with remixed terrain making a different hillfort location.

This also had a version with extras. So that’s four maps!

Then there was also a short pdf and ebook with my research notes and inspiration for using hillforts in your game. It also has a fun 3 part hillfort name generator.

All patrons also enjoyed a 25 minute process video as a thank you for their support.

We broke through our first community goal at 50 patrons, which gave everyone another location map, which also had an alternate version.

All of the maps come gridded, hexed and plain, and also in multipart home print versions you can run off on A4 sheets or US letter.

That’s a lot of stuff! And we’ve been running less than a week! Next month the theme is barrows (tumuli, rather than the single wheeled gardening cart), and you can expect a bounty of maps for burial mounds, along with more pdf content and new videos.

In July our theme will be barrows (the burial mound kind, not the one wheeled garden cart)
In addition to a bunch of awesome maps, Extras Tier patrons will get video content from my hike to... well watch the trailer and find out.
[video=youtube_share;TdmXW_6y_VQ]https://youtu.be/TdmXW_6y_VQ[/video] July’s first round of content for patrons is here, with 3 variants of the Barrow map for basic tier patrons ($2) and an additional 2 maps, miniPDF about barrows and a video for Bonus tier patrons ($3).

August's theme at www.patreon.com/jonhodgsonmaps is "ruins"! Loads of exciting content is coming together, with poster maps of ruined adventure locations (with or without hexes or grids), guest writers, amazing exploration video, mini PDFs and more. Get on board from just $2, and gain access to the two previous months' content too! AMAZE! As part of ruins month, I take a trip to Tappoch Broch on behalf of my patrons!
[video=youtube_share;SfY0kaLpt38]https://youtu.be/SfY0kaLpt38[/video] I backed it, always love your work! Any recommendations for paper specs or printing method for making reusable 11x17 maps?

mksharma said:
I backed it, always love your work! Any recommendations for paper specs or printing method for making reusable 11x17 maps?
Click to expand...

Thanks for your support! I use my local print shop, who also offer large format lamination. Most local places will have a variety of options. Currently I'm looking at printing a batch of poster maps on the vinyl used for pull up event banners. If it works out well we'll maybe have a little Kickstarter to fund a small print run! Hey you! This free sampler at DrivethruRPG gives you a small slice of the kind of monthly content available via Patreon at www.jonhodgsonmaps.com


At the heart of it is a FREE 27"x32" PDF map of a hillfort, customizable with layers that you can switch on and off in Adobe Reader.


Also included is a FREE mini PDF about hillforts, with lots of inspiration for using hillforts in your games along with a handy hillfort name generator.


Check it out: http://drivethrurpg.com/product/249258/Jon-Hodgson-Maps-Sampler--Hillfort. Becoming a Patron is just $2 a month to get a map a month. $3 for all the cool extras.

​
I've just uploaded a map of a ruined broch, just like the one I explored in this month's Exploration Video for my Extra Tier Patrons at www.patreon.com/jonhodgsonmaps
Join today and get this map along with a bunch of others, plus videos exploring ancient sites, mini PDFs of gaming material on subjects like Hillforts, Barrows and Ruins! Patronage starts at just $2! 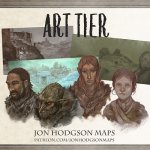 ​
The Art Tier is now open at www.Patreon.com/JonHodgsonMaps! Character portraits and location illustrations every month! Read all about it: https://www.patreon.com/posts/art-tier-now-21012972

Here’s a look at one of the maps from www.patreon.com/jonhodgsonmaps printed out. They’re huge! ​
This marsh map was a free bonus for patrons this month. This month's theme was Ruins, and our guest writer was Gareth Hanrahan! Next month's theme is "Under the Earth", and we have a guest writing spot from the mighty Stuart Boon! To celebrate the joy of being alive, and being able to play games, let's all have a free GIGANTIC MAP! (Actually, it's thanks to your support, my wonderful Patrons, that I'm able to share this one with all gamers! Thank you!

The Chasm Run map is four 27x32 inch maps that join up into one long chasm run. You can happily use them individually or as a titanically long single map.
Get it here:https://www.patreon.com/posts/21615152 It’s hard to think of a more exciting shot of my miniature backdrops in use than this one of Rick Priestley, author of Warhammer Fantasy Battles, Warhammer 40,000, Warhammer Ancient Battles, Warmaster Ancients, Gates of Antares and The Red Book of the Elf King, among many other amazing games.


Here’s Rick setting up a shot of a Red Book of the Elf King game. I dropped in an elf tower to the scene especially for Rick and co.


Huge thanks to Rick for allowing me to share the photo, and thanks to James for delivering it to the game.


Find out more about The Red Book of The Elf King here: https://www.lucideyepublications.com/the-red-book-of-the-elf-king


To celebrate such a truly exciting thing, everyone can download a special edition of the backdrop as used by Rick here: https://www.patreon.com/posts/miniature-in-21766711 I hope you enjoy them!
Jon

It's just $3 a month to get on board as an Extra Tier Patron, and you'll instantly gain access to my whole back catalogue including gaming PDFs from Gareth Ryder Hanrahan, Stuart Boon, Jared Earle and myself. As well as a TON of maps, videos and more!

Loads of new content is available now, including Mountain Pass Map, Mountain Tiles, the Chief's Hall map and a 32 variant portrait! If you sign up as a patron you'll get instant access to the entire back catalgue for your level! That's months and months of maps, art and PDFs! January is coming to an end, and I have some bonus maps for Extra Tier patrons! 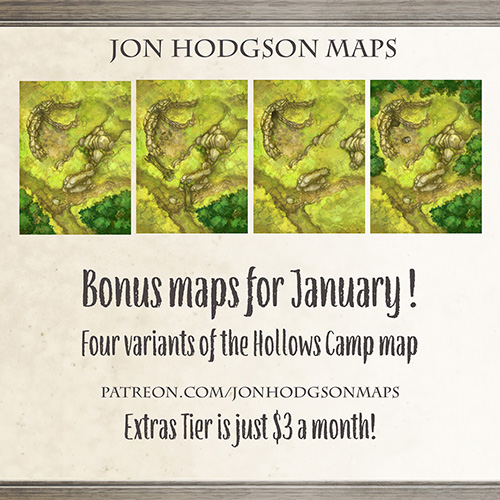