D&D 5E Journeying to Hell & Back Again: A Review

There are many avenues to get oneself into role-playing games, but one such avenue that is making a come-back is the Solo adventure. Kienna Shaw & Donathin Frye have delivered a splendid example of a solo adventure that is still flexible enough for traditional play should you want it. Interested in going to hell? Well, put on your fire-proof boots and come along. 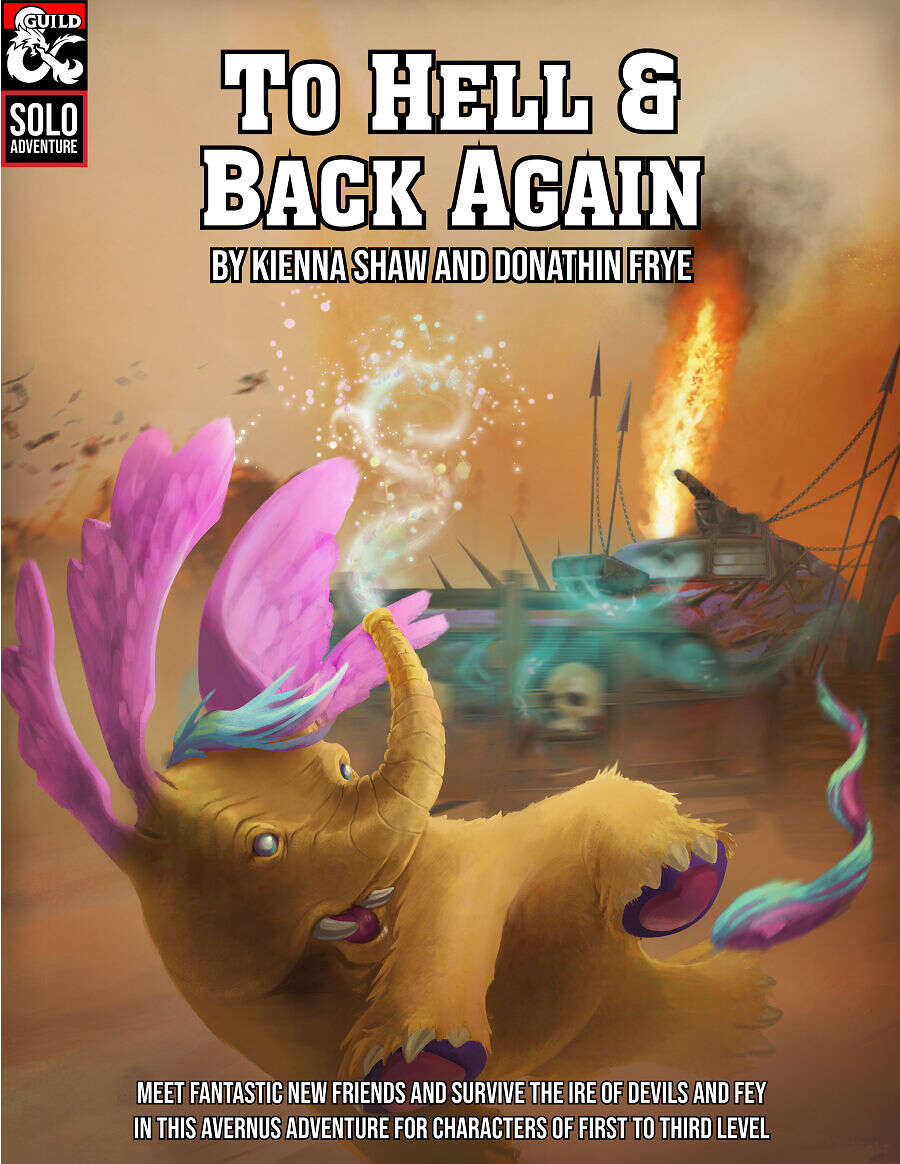 SPOILER SPACE: There may be the tiniest of spoilers ahead (or perhaps not) as it can be hard to talk about an adventure without them. The Long & The Short: Good Adventure. If SOLO adventures are your thing, grab it. The longer discussion begins in 3...2...1

To Hell & Back Again drops a 1st level character(s) into a small adventure in the lands around Baldur’s Gate. It is designed to be played as a prequel to Wizards of the Coast recent Baldur’s Gate: Descent Into Avernus hardbound adventure. To Hell & Back Again is a product of the DM’s Guild and the first such product by the authors specifically for the DM Guild. It clocks in at 80 pages, with decent if minimal art and a nice interior design. It is not laid out in the current D&D adventure format, but the adventure is easy to follow and the layout works just fine.

To Hell & Back Again offers good advice for running the adventure in solo mode along with a few pre-gen player characters, giving players a nice variety to choose from. The Introduction section is kept tight, giving just enough information to run the adventure without getting bogged down in needless details. As mentioned, the section gives rules and advice on running through the adventure in solo mode. In addition, the Introduction talks about what changes to make if a group of players tackle the adventure; both with and without a DM. Simply choose the mode you prefer and go for it.

One rule added for the adventure is that of Destiny Points. Destiny Points give the solo player some added luck. Each player gets five and only five destiny points for the entire adventure. If a group plays the adventure, they still only have those same five points; not five each.

In Chapters 1-3 we get to the meat of the adventure, These chapters take the player from the service of a wizard named Shandalar to Hell and eventually to the abode of the being known as the Lady in Green. This journey is eventful and the time spent in Hell is long. The player will encounter a wide variety of creatures and has ample opportunity to role play as well as fight. For convenience the creatures encountered have their stats listed in the body of the adventure as well as in Chapter 5: Appendices. This is useful in any adventure, but in a solo adventure in particular, as it saves in page flips.

Chapter 4 wraps up the adventure and discusses how tie everything into Descent Into Avernus. This chapter has a great deal of information, but allows a player or players to take what happened to them in To Hell & Back Again and transition without too much trouble into Descent Into Avernus. As mentioned, Chapter 5 is the Appendices. It is full of NPCs, beasts, and items of note. Finally come the previously generated characters that you can pick up and play in the adventure. These come with names, gender pronouns, and backgrounds already. If I had a quibble with To Hell & Back Again (and other adventures with pre-gens), it is that it gives us too much information on the pre-gens. Names and genders are things the player can provide. What is very useful is that each is fleshed out for the first three levels.

Overall I like To Hell & Back Again and what it has to offer. As a solo adventure, it stands out and makes for a solid group adventure as well. I recommend picking it up.