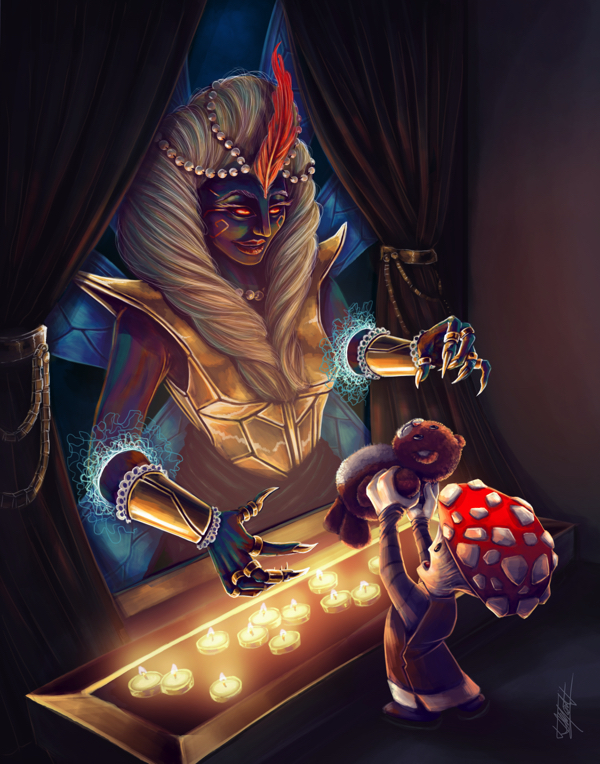 Coming in Issue #4 of the Gate Pass Gazette, the official magazine of Level Up: Advanced 5th Edition!

Battlefield Horrors: The Cadaver Gorgers
Making their home on fresh battle grounds and forgotten mass graves alike, the creatures collectively known as cadaver gorgers are different stages of the same life cycle. Features the hungering blood maggot, the unsettlingly clever corpse fly, and a walking disease vector in the form of the gorger zombie. By Tim Korklewski

Well-Equipped: Items of Intrigue
In every noble court across every plane, behind the pageantry, wealth, and gaiety, there is one thing in common: intrigue. The following magic items and armaments in this article are intended to give any player character or NPC an edge—figuratively and literally—in this dangerous game, all while ensuring that they look elegant and well-attired. After all, if one is going to walk the halls of power, one of course must be properly equipped. By Sarah Breyfogle

Ways to be Fey
What happens when make-believe believes it’s real? This article features a new Heritage in the form of the fey creatures known as the dreamborn, as well as the Dreaming Wilds and Fey Court Cultures and the Fey Servant Background. By Ryan Nock

Lone Rangers: Braving the Wilds Without Spell or Beast
A request that has been circulating in the Level Up community since the release of the Adventurer’s Guide is for a ranger without spellcasting or a pet. As it turns out, that’s a pretty broad set of parameters, so in this article you can find not one, but three such ranger archetypes! By Peter N Martin
Last edited: May 27, 2022
Click to expand...

Supporter
I dunno about y'all, but this looks crazy!

Steampunkette said:
I dunno about y'all, but this looks crazy!
Click to expand...

Definitely. I really like the emphasis on magic gear that enhances noncombat pillars of the game.

The cover art is amazing too!

Xaielao said:
The cover art is amazing too
Click to expand...

It's a couple example fey. I wanted one toadstool and one that lives in paintings.