On March 12th, 2020, Onyx Path Publishing launched their first Kickstarter for Legendlore for Dungeons & Dragons Fifth Edition into the last moments of America’s pre-COVID reality. That same day, multiple major sporting events announced their cancelation cementing the reality of the pandemic in the US. By March 23rd, OPP canceled the Kickstarter. I interviewed developer, Steffie De Vaan, about the project and we had a chance to discuss the cancelation and OPP’s plans to relaunch the project. OPP’s next effort, the M20 Technocracy Reloaded Kickstarter, showed solid results demonstrating the continued viability of RPG crowdfunding projects and signaling the return of Legendlore to Kickstarter. The relaunch prompted another conversation with Steffie De Vaan about the project. 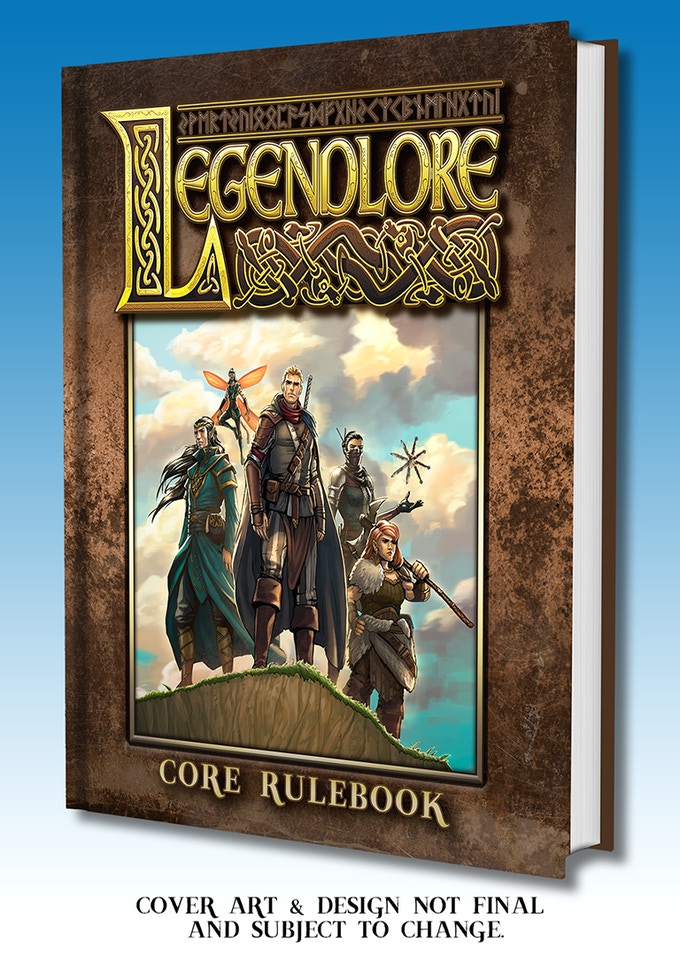 For those not familiar with the Legendlore comics, I’ll reprint Steffie’s response from High Level Games to what the setting is based on:

“The Realm, and later Legendlore, is a comic initially published by Arrow Comics and later by Calibre Comics. They’re about a group of four friends who open an enchanted chest and find themselves teleported into the Realm, a fantasy world full of elves, dwarves, and at least one evil dragon in disguise. They go on adventures, some of them travel back to Earth, some don’t, and I think at least one dies.”
Click to expand...

EGG EMBRY (EGG): Steffie, this is our second conversation about converting Calibre Comics’ Legendlore into a RPG. It was kickstarted but Onyx Path Publishing canceled the first round. What happened to the first crowdfunding campaign?
STEFFIE DE VAAN (SDV): Covid-19 happened. Turns out the start of a global pandemic, when people aren’t sure about their financial and job security and have bigger worries than games, isn’t the best time to launch a new product.

EGG: What makes now the right time to bring this project back to Kickstarter?
SDV: As weird as it sounds, we’ve all gotten used to the new normal. People have a clearer insight into what the pandemic is doing to their finances. We noticed with the Technocracy Reloaded Kickstarter that people were reading their Onyx Path newsletters again. So we’re ready with Legendlore to give it another go.

EGG: Onyx Path Publishing is good about giving backers a rough draft of the RPG out of the gate. However, they’re going a different route this time with the preview copy. What’s the plan for this one?
SDV: As a thank you to the backers, we released the preview copy after cancelling the first Kickstarter. We wanted people to play the game, but we also just wanted to thank them for their support. With the preview out their and being played, it makes sense to extend the same to new backers. I’m personally a big fan of this approach because the book is so good. Jump in for any amount to get the preview, and I’m convinced people will want the hardcover after reading the manuscript.

EGG: In the last interview, I asked what makes D&D 5e the right system and you said it was “solid and easy to use.” Was there anything in 5e that was hard to fit into Legendlore? Any element that had to be refined or removed?
SDV: We removed Inspiration, because Legend does sorta the same thing. Legend is an epic destiny your character has, which you as player hand-design, and it grants points for the whole group to use. These points let you introduce narrative elements (“That girl I flirted with at the bar? She works as a guard at the prison currently holding us”), gain advantage on rolls, and so forth.

EGG: Are there any new classes? New feats? New backgrounds? Spells or magic items specific to Legendlore?
SDV: Yes to all! Legendlore has its own unique setting and we created people (we chose not to use the word ”races”) and classes. For example, the setting has only one deity in Othaariss, goddess of fire and also healing. So she gets several classes working with her. We also have the white unicorns, which are paladin protectors of Ardona. Since the premise of Legendlore is “YOU get teleported into the Realm” we also created new backgrounds to fit the players. You can even have the “rpg afficionado” background.

EGG: How many Legendlore monsters are stat’ed in the campaign book? What are some of your favorites?
SDV: We have a TON of them. We did specifically choose not to use people as monsters, so you won’t see Orcs or Trolls in our creature section. Instead, those go in the people chapter, which contains antagonists and allies alike. We pulled from the Legendlore comics for our creatures and my personal favorite is the Shrieker Mushroom. It’s a symbiotic mushroom that incapacitates people with high piercing shrieks, then waits for a lager predator to kill them, and grows/feeds on the remains. Some of the more intelligent creatures even cultivate these mushrooms for that specific reason. I love those little details. 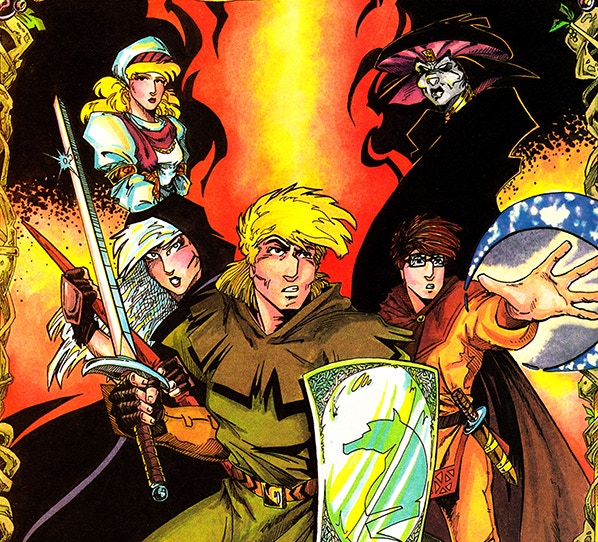 EGG: The creative team includes yourself, Elizabeth Chaipraditkul, Jacqueline Penny Hart, Travis Legge, Megan Mackie, Ashley May, Katriel Paige, Roman Trevisanut, Vera Vartanian, and Ashley Warren. That’s an incredible level of talent for this project. As a creator, how do you keep on the same page as the rest of the team and write so each section blends seamlessly?
SDV: We start with a detailed outline, and then Slack helps with brainstorming. I’m a huge proponent of communicating while writing, because it allows writers to bounce questions off each other and coordinate better. Then at the end, the developer (so here: me) goes back in and lines everything up. “Kit writes this, but Ashley writes this, and those two need to line up.” Obviously though, the more work and coordination you put in at the front end, the less work you do in dev edits. And this time was really excellent about that.

EGG: Last time I asked you a similar question to this one, but I think it’s still relevant. DC Comics’ The Last God is jumping from comic to D&D 5e supplement, Vault Comics is making a new Vampire: The Masquerade comic series, IDW continues to create Dungeons & Dragons comics, Image Comic’s Lazarus has a campaign setting book for Green Ronin’s Modern AGE (which I reviewed on d20 Radio) as well as RPG information in each issue of the Lazarus: Risen series, and, of course, Legendlore is coming from OPP. In your opinion, what comic properties would you like to work on as RPGs?
SDV: If anyone does anything Marvel: please hire me! Marvel actually has several RPG iterations, including the excellent Marvel Super Heroes which I highly recommend.

EGG: In each of our interviews, I ask you about the projects you’re working on. What do you have coming up?
SDV: Liz and I are still running our Patreon. I’m working on a big fantasy setting called City of Bone, but we’re still releasing smaller games too. Our next (out this month!) is Pride Punk Pixies. Around this time, Cat Evans and I dropped Masks of Theros for the DM’s Guild. It’s an epic adventure path, spanning fate and death, taking characters from level 1 to level 11 for The Mythic Odysseys of Theros. I think players of DnD will love it, and it’s easily refitted for a non-Theros campaign, so please check that out. If it does well, we’re writing a sequel for levels 11+. I’m also working on Anima for Trinity Continuum, which is the MMORPG setting-ish for Continuum. It has a lot of cool twists, so keep an eye out for that. I’m writing an adventure for Brindlewood Bay, which is a Murder She Wrote type of setting from the makers of Trophy. I’m also doing several things for the Second Edition of Dark Places and Demogorgons by Wet Ink Games.

EGG: Thanks for talking with me about this project a second time. For fans that want to find out additional information about the campaign, where can they learn more? Where can they follow your work?
SDV: Legendlore Kickstarter. Onyx Path’s website. You can also find all the comics on DriveThruComics. They were written in the 80’s so keep that in mind, but I read the lot back to back and genuinely enjoyed them.

Could Pugmire to be adapted into a cartoon (or a mobile videogame) to self-promotion? You know, cute antropomorphic animals are perfect to be sold as toys.

A new marvel RPG would be awesome, but d20 isn't yet ready for superheroes, but if they find the right keys for the power balance, it could be a lot of money for WotC.

Kind of sad it hasn't even reached either of the two stretch goals.

I wonder if that's because a lot of players don't really have nostalgia or memories of The Realm comics and such?