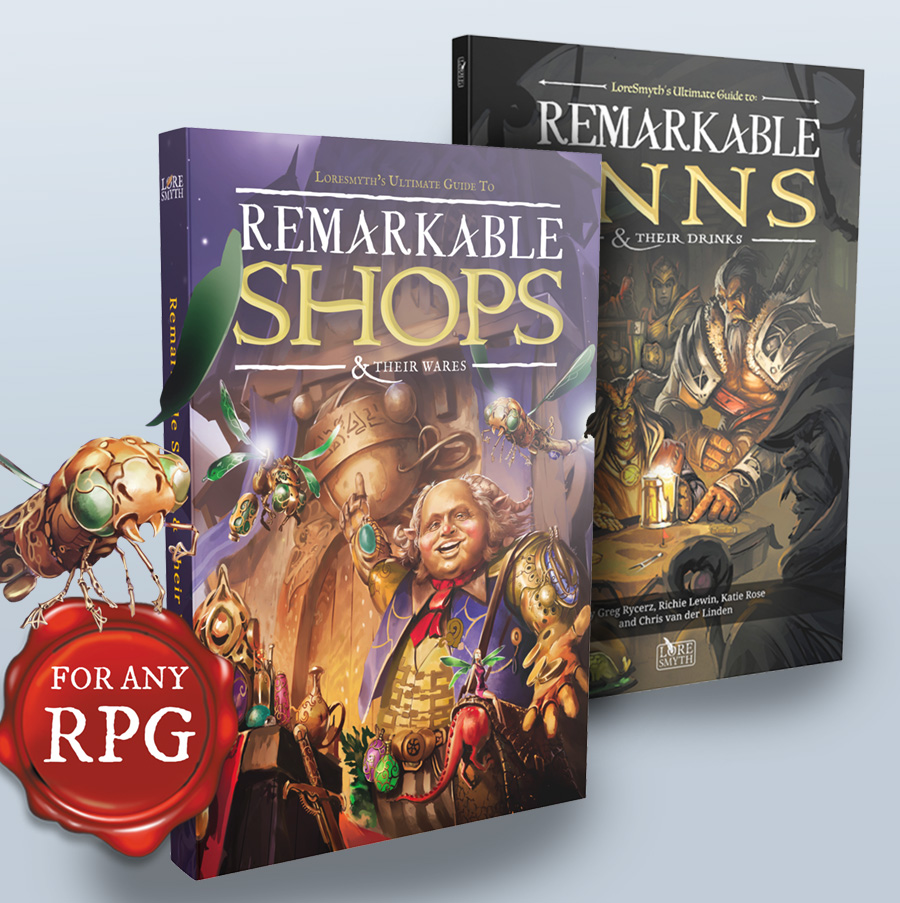 Two classic fantasy campaign staples are the local shop and the local inn. Players love to haggle, burgle and peruse the wares of the shopkeeper looking for that great magical item that will make them more effective in a fight or offer a great sideways solution to a problem in a fight. Inns are where players seek out rumors, tell tales of previous adventures or even roll into a classic bar fight to keep things from getting too civilized. Loresmyth released a pair of system-neutral books to help turn these central columns of campaign life into memorable locations full of people to talk to and things to buy. They provided review copies for me to discuss how to make a trip to the store for some healing potions into an unforgettable encounter. 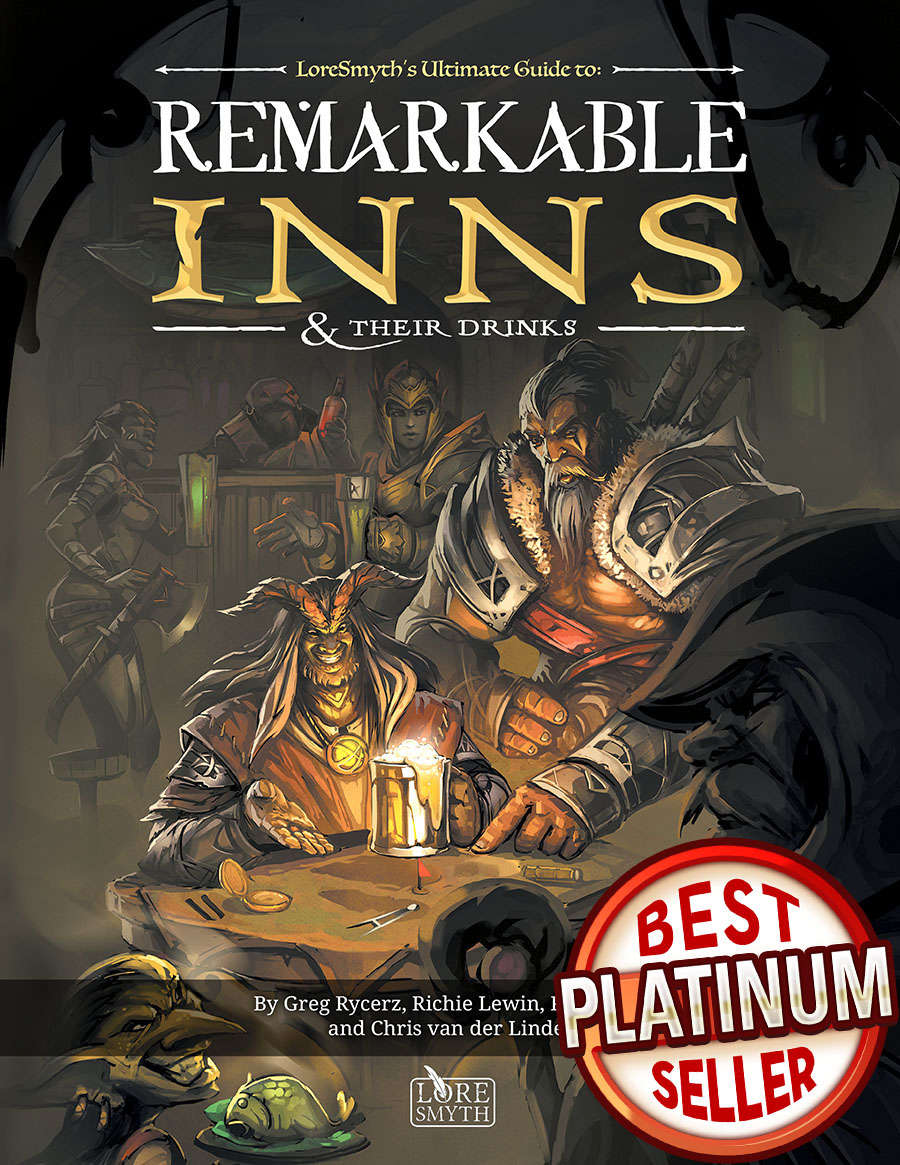 The first thing that most people do before setting out on a trip is purchase a travel guide to find good places to eat and hotels to stay. The clever first part of Remarkable Inns And Their Drinks is structured like these travel guides. They highlight several different inns from high class hotels to the dives where the innkeeper is as likely to rob you blind in the night as let you sleep peacefully. Each inn is rated in wealth, prices, security and local authority. It also lists how many rooms are available, the services provided at the inn and the types of customers it prefers to serve...plus the ones that might get the cold shoulder from the staff.

The most flavorful element of these write ups are the bills of fare for each establishment. So often, players wander into an inn and order ale, bread, and cheese because those are the only menu items the DM can come up with on the fly. Many of the foods and drinks are there to help enhance the inn experience but there are a few that can have a mechanical or magical effect on the players too. Thurgan’s Ale, for example, is just a nice amber beer, while the Purple Worm Wine offers a hallucinatory experience that comes with a table full of good and ill effects.

The second half of the book provides guidelines on how to create inns like the ones fleshed out in the first half. It also provides NPCs, and the types of diversions that might be found in an inn like bardic songs, games of chance, and random events that might befall characters who opt to stay at a cheap inn rather than one worthy of royalty. 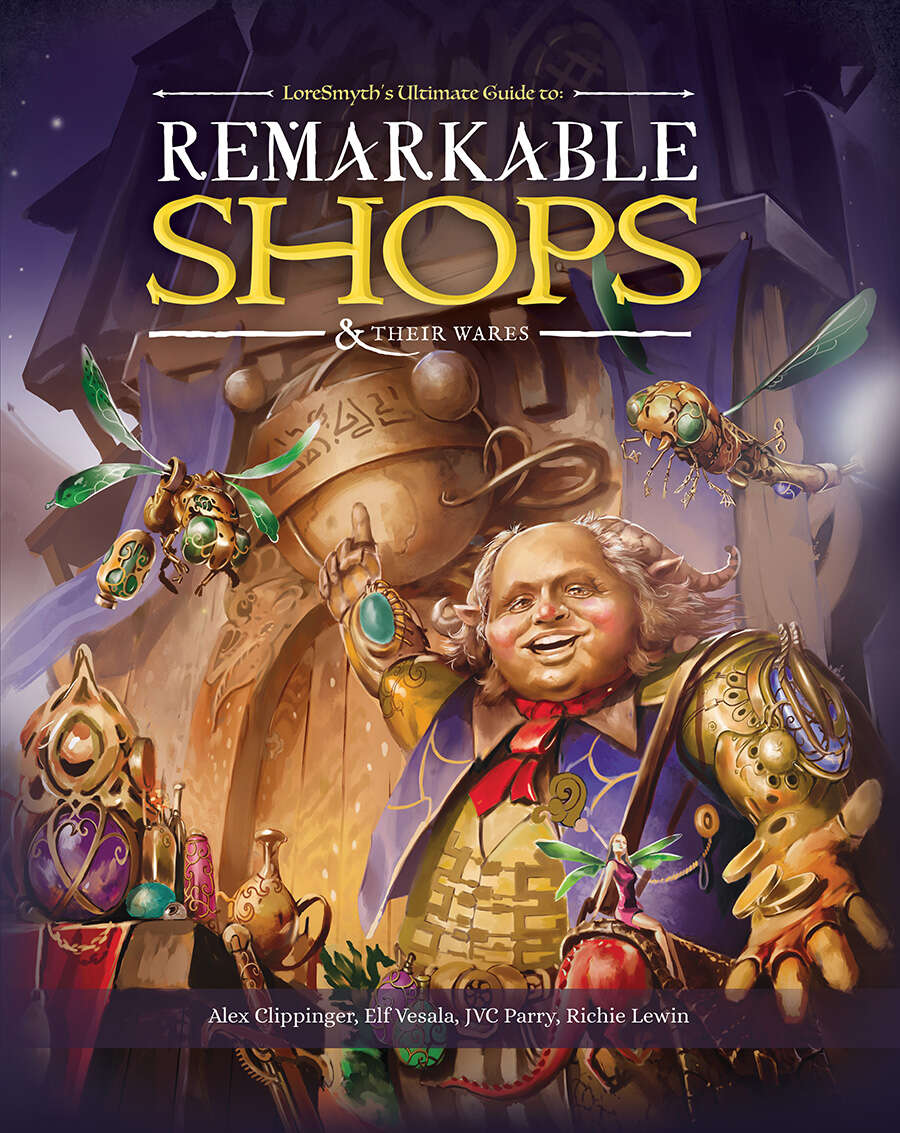 The follow-up title Remarkable Shops and Their Wares is set up in a similar method to the previous book, with travel guide style write-ups of different places to buy equipment. Here, the focus is what makes each shop unique. The shops in this book tend to focus on weird and high fantasy establishments, such as a magical weapon forge run by a storm giant or a barbershop that sells poisons labelled as hair tonics. The most unusual of these is the Undersea archives which buys, sells, and trades memories. It’s a great manufacturer of plot hooks and also provides an in-game method of players trading out skills or abilities that they no longer find useful.

This book also delves into unique wares that can be sold in any shop. Rather than lists of mundane items, they tend to be the exotic and magical items that would be in the display window to lure adventurers into the shop. Magic items have short, punchy write-ups that can be adapted into the mechanics of whichever fantasy system the GM prefers. There’s a section of books that feels right out of Skyrim with a mix of evocative titles and a few that improve character abilities. Mounts get a section for players who want to travel on a unique ride. Why get a horse, when at the right shop, a skeletal warhorse is 200 gold pieces?

This book has a segment about players running their own shops, as any Dungeon Master knows there’s always a part of the campaign where the players wonder if it's easier to build their own shop in town rather than keep diving into the dungeon. Players hoping for a heavy duty spreadsheet and tons of modifiers will be disappointed that the designers tried to keep things streamlined. In short, you have to spend gold pieces to make gold pieces. The central mechanic is a d20 Profit Roll modified by the quality of the staff on hand and the goods sold at the shop. These modifiers and the number rolled become a profit percentage based on the money invested in the store. If the players spend 1000 gold pieces on building their store, and their Profit roll is a 10, that’s 10% of 1000 or 100 gold piecess that month.

These rules are intended to be much more of a narrative driver than a hardcore business simulation. There’s an event chart that generates things to modify the profit roll like rival potion shops or a chance in local fashion. Absolute losses only happen on when the Profit Roll is a 1 and I know plenty of game shop owners who would sell their souls to Asmodeus for a shop that only had a 5% of losing money each month. Still, they seem solid enough as a background mechanic for a game with a focus outside of running a shop, with just enough chances for misfortune to get players back out in the dungeon to keep money flowing toward their endeavors.

This line is an excellent choice for Game Masters who want to up the fantasy content of their campaigns by bringing those elements home to the hamlets and cities where their players spend their hard won gold.

If you enjoyed this review and are considering purchasing these games, please consider using the Drive-Thru affiliate links in this review. Every little bit helps your favorite freelance writers.

FWIW: DriveThru also has the Cyberpunk Jumpstart marked down to $10. Not a shabby price.

embee said:
FWIW: DriveThru also has the Cyberpunk Jumpstart marked down to $10. Not a shabby price.
Click to expand...

That's one of the most impressive non-sequiters I've seen in a while! I commend you!

Hey, I was checking out DTRPG to see these two books (because I'm tired of making my players just roll persuasion and insight to see how much they'll get ripped off in shoppes) and saw the price on the current bestsellers. A thousand pardons...

I bought this book, I like it. Would recommend.

Did you buy both books?

And I will say, one of my groups, they Looooove shopping. I have to be on my game to create NPCs that are interesting to them as shopkeepers...

Definitely interested in these - one of the 2E books I still use a lot is Aurora's Whole Realms Catalog - but gonna have to wait til after the holidays to see what the $$$ sitch is like.

Eyes of Nine said:
Did you buy both books?
Click to expand...


Just the Shops book, but will pick up the Inns book too when my LGS restocks it.

Tyler Pickering said:
Just the Shops book, but will pick up the Inns book too when my LGS restocks it.
Click to expand...

Oooh, your LGS had it? I wonder what the Alliance or ACD code is.

Eyes of Nine said:
Oooh, your LGS had it? I wonder what the Alliance or ACD code is.
Click to expand...

Yeah my LGS had it.

Remarkable Inns is a fun volume, and the inns are easily fit into most campaigns. The little details like the drinks served at each establishment go a long way towards making each feel different - you're not just going in and ordering "ale."

My players love to shop, but they are cheap ba$tards. They wouldn't order a specialty drink on their best days.

U
Adventure in the Global South with GURPS Sriwijaya