So, how would you make the classic, whip and pistol using Indiana Jones in 5th edition?

Supporter
Crossbow master and martial weapon prof for the whip might be a start. the hand xbow is the pistol obviously. Battle master would give you some neat stuff to do with the whip.

I created this character to play Tomb of Annihilation, naming him Iriaebor Ford (a.k.a. Hezekiah Ford, Jr.). I commissioned some art for his portrait. 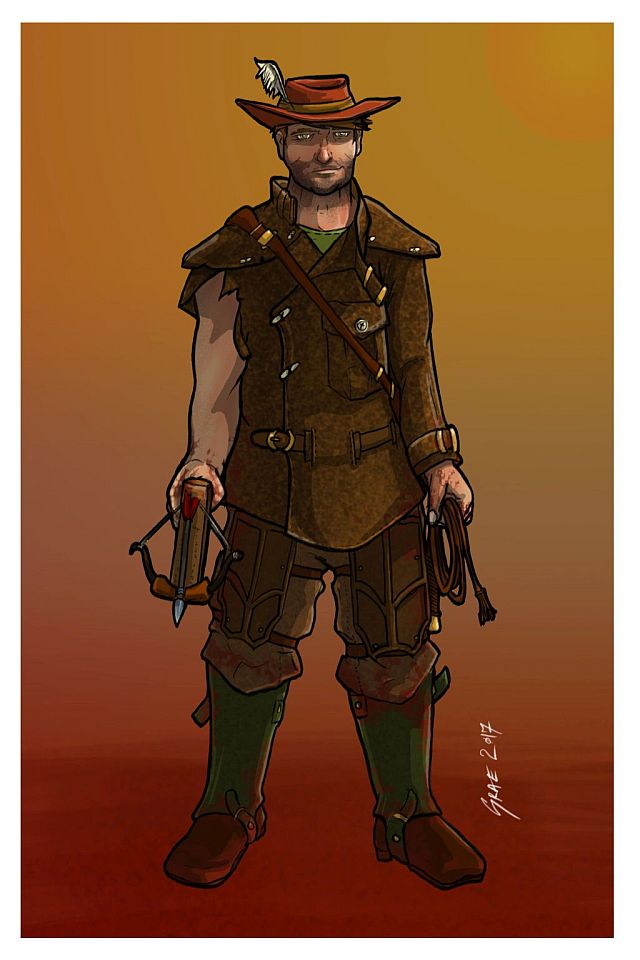 I went with a fighter/rogue (thief) with Observant. Another player made my dad, Hezekiah Ford, Sr., a mastermind rogue. We covered each other's weaknesses when we weren't arguing about Mom. I did all the trap and secret door finding. He did all the figuring out of their workings. Then we teamed up to disable traps or open locks.

I made up a pretty cool archaeologist using the Valour Bard. Like all bards his skills were excellent and broad. He could fight well enough too. I was not trying to use a whip. He was a conquistador style guy (though not evil), so used rapier in town and a halberd, breastplate and arquebus when in the wilds.

Dr Jones used his fists far more often than a gun or whip. Tavern Brawler or the alternative fighting style in UA for brawling might be appropriate.

One of my players created "Ohio Jones" for one of my campaigns. He went with Rogue/Arcane Trickster, using the mage hand for the whip tricks. He used a light crossbow as the pistol and had the Sage background. He was pretty interesting for a gag character.

I've done a version of this in a couple of games with the thought that in a world with prevalent magic (as opposed to a couple of relics that he happens to have encountered in his life), Indy would at least have a smattering of it available.

My build has been Str based Variant Human.
- Indy really needs good Str/Dex/Con/Int/Cha based on the fact that he wears no armor, never gets hit, mostly punches, but is still a good shot, takes a TON of licks and keeps on kickin', knows his stuff about history, etc, is charming as hell, but wisdom... not so much. He's pretty rash and often makes poor decisions that end up working out.

Human Skill: Investigation
Human Feat: Tavern Brawler (I mean, come on... Indy punches a lot, the whip and gun are just there).

Staff member
The last Indy style PC I made in D&D was centered around a Specialist Mage (Diviner)/Ranger build. Took some levels of Spellsword, too. He wasn’t the best at anything, but was #2 at a bunch of things that came in handy.