Making it All Up (With Help)

Random generators can be used to generate campaign ideas, from scenario-starters to sandbox campaigns. But how much randomness do you really need? 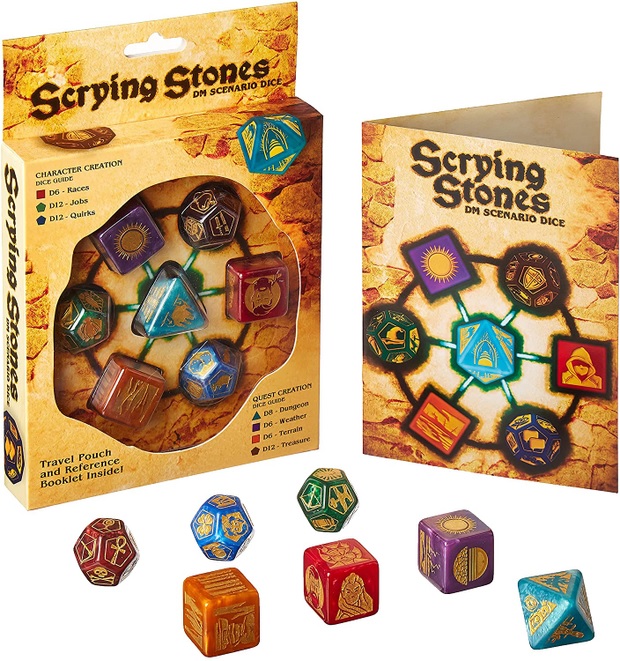 Before there was the Internet, there were printed tables and dice. Not surprisingly, dice wasn't just used for resolution in role-playing games by rolling over or at a certain target number, but also for assigning a result with the assistance of a table. So perhaps it was inevitable that the table would be combined with the dice itself.

Stratagem's Scrying Stones cover a range of seven different random results. For NPCs, it includes species, jobs, and quirks. For creating scenarios, it includes weather, terrain, dungeon themes, and treasure. The variety of the results are directly tied to the number of sides on each die. Oddly enough, the dice have different numbers of sides, which means the dice with the smaller number of sides produce less results.

For example, the character creation dice has just six sides, not enough to cover the standard Dungeons & Dragons species. The jobs die, a 12-sided, covers a wider range of classes or backgrounds. The quirks die is less effective because of the massive number of possibilities; as 12-sided die can't adequately cover it all.

The scenario generation dice fare a bit better because fantastical results like dungeon themes and treasure are less sharply defined. Weather and terrain, on the other hand, have expected results that are glaring when they're missing -- the six-sided weather die has sunny twice and then equal chances of snowstorm, cloudy, thunderstorm, and heat wave.

One of the challenges with putting the results right on a die is that there's only so much real estate; the more sides on the die, the smaller the available faces. This is probably why the dice are never large than a 12-sided. For higher numbers, there's another tool to randomize results. 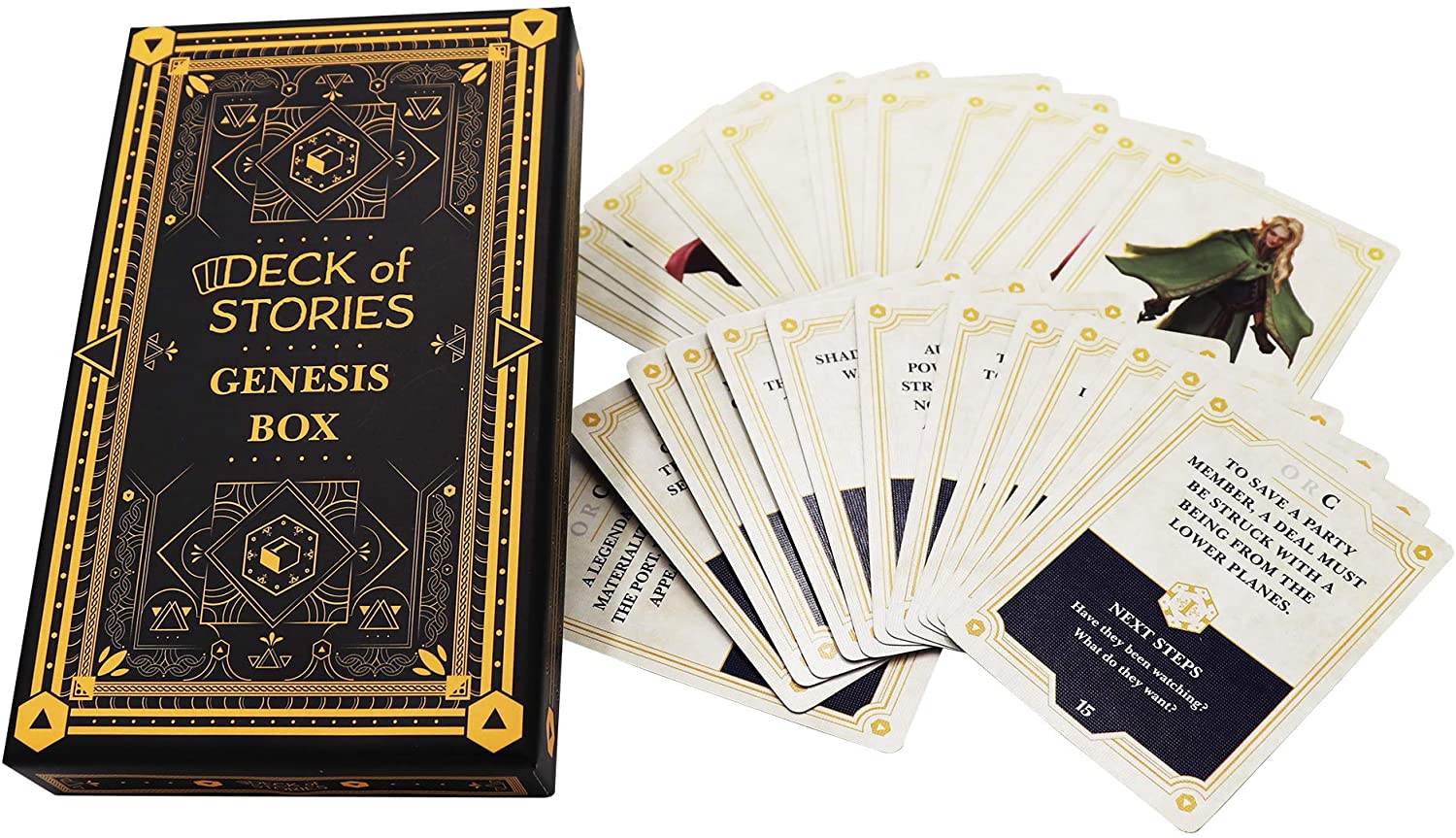 Dungeon Craft's Deck of Stories takes an alternate tack, using a deck of cards to represent plot points, NPCs, and sensory descriptions. Unlike dice, cards don't just provide randomization by shuffling the deck, they also can be used as thought prompts by arranging them in a certain order.

The plot points deck uses Dungeon Craft's ORC system. Each card is rated with an O, R, or C, which stands for Opening Action, Rising Action, and Climactic Action. Some are just one Action, others are two, and there are two cards that are all three, with the recommendation that they be played from left to right in ORC order. It works well enough, with the connections between the cards created spontaneously by your imagination.

The NPC deck works less well because it has so many possibilities to cover. 40 NPC cards create some unique but limited-use NPCs. Each card features a picture of the NPC on one side and a description of the NPC's personality quirk, flaw, goal, and secret. Like the plot points, this deck is meant to spark an idea about a general NPC that can be modified to the situation.

The sensory deck is the least effective of the three, at least in part due to the limited number (20 in the Genesis Box) and the wide variance of the topic it tries to cover. Of course, you can always buy more cards, or make your own deck.

There are countless options for randomly generating just about anything on the Internet, so any physical option is up against the limitless space of the digital world. You can create your own generator or just look up a random table that someone else has generated for you. Chartopia's a good place to start. My personal favorite is Fantasy Name Generators, which goes well beyond names to provide descriptions of practically anything you can imagine and some you haven't thought of yet.

Blue Orange said:
I collect dice, so I've seen a lot of these; there's a whole set of 3e ones that had the monster types (aberration, etc.), character classes, and the like on them. I've seen the dungeon dice that had corridors, turns, and intersections, but not the fancy ones Marc_C is showing with all the rooms. Where are those from?
Click to expand...

Dungeonmorphs! I was a Kickstarter backer when they were first launched: DungeonMorphs

May 4, 2021
InkwellIdeas
I
B
Beadle & Grimm's Platinum Edition of The Wild Beyond the Witchlight