Although he isn't often associated with geekdom, Mark Twain's love of technology, his clear-eyed cynicism, and his role-playing persona would fit right in with modern gamers. 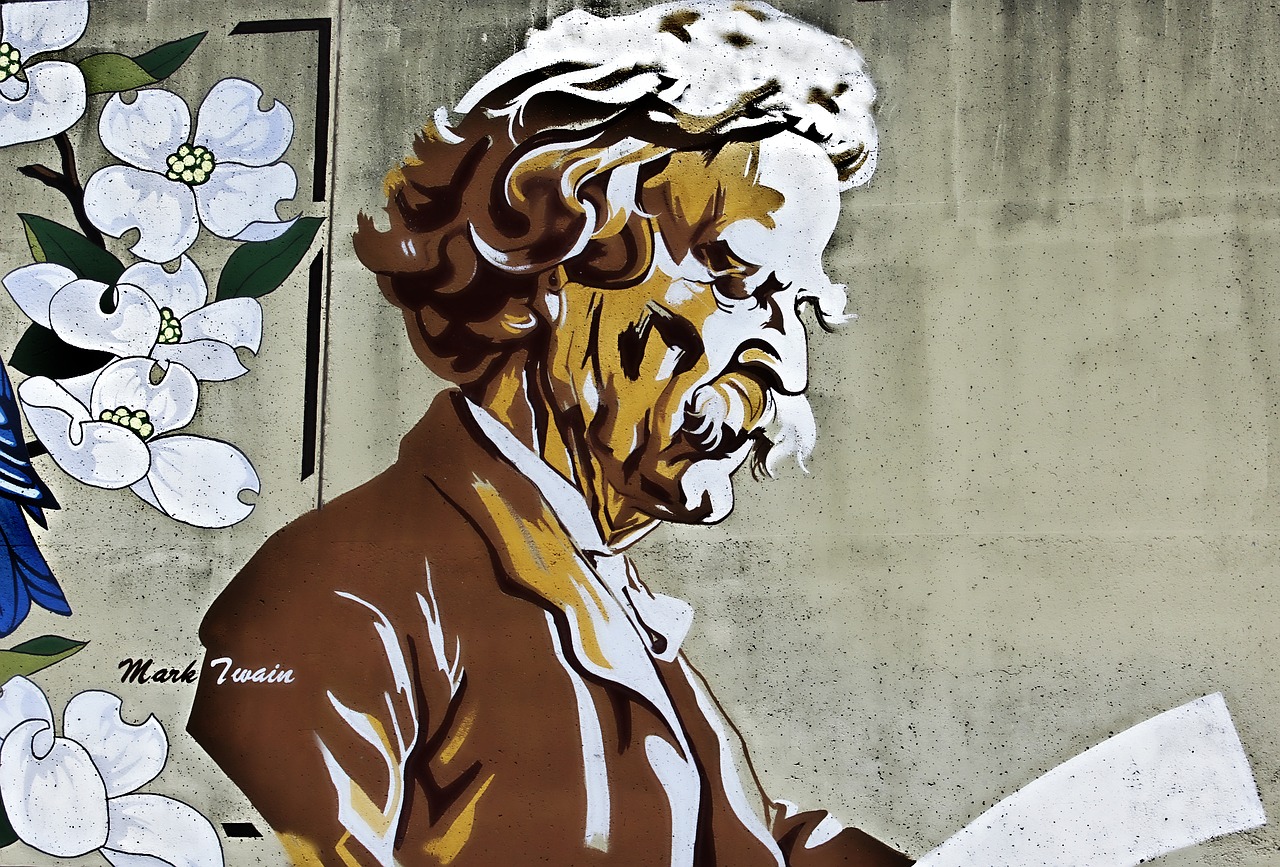 Mark Twain (1835-1910) was actually the invention of Samuel Clemens, inspired by Clemens’ work as a steamboat pilot (“mark twain” was the leadsman's cry for a measured river depth of two fathoms (12 feet), which was safe water for a steamboat). Clemens eventually moved to Hartford, Connecticut in a house where he wrote many of his classic novels, including The Adventures of Tom Sawyer, Adventures of Huckleberry Finn, and A Connecticut Yankee in King Arthur’s Court.

I had the opportunity to visit the Mark Twain house, itself a marvel of engineering at the time. Clemens’ love of technology is apparent in owning one of the first telephones, an early intercom system, and an early refrigerator. The house even has central heating and cooling. Its steampunk flair would make a great setting for an adventure; you can view the entire house in 3D online.

Clemens would often entertain guests in the dining room, fully in character as Twain as he “workshopped” an early form of stand-up comedy. When he wasn’t role-playing as Twain, Clemens sharpened his storytelling skills by concocting an impromptu tale for his children in the library. He would incorporate every piece on the mantel into the story, beginning with a painting of a cat and ending with the portrait of a woman (whom the girls named Emmeline). It’s an interesting role-playing exercise for any game master, you can try it here.

In addition to his skills as a storyteller, Twain was an inveterate gamer. He was fond of billiards and would play all night; his billiard room was also where he wrote many of his stories. Twain’s love of gaming didn’t end with billiards though. He also patented his own game.

Patented in 1885, the game was titled “Mark Twain’s Memory-Builder: A Game for Acquiring and Retaining All Sorts of FACTS and DATES”:


The instructions for the one- to four-player game indicated that players should stick colored pins into a 9-by-13½-inch board, one for each important date memorized. It’s remarkable how Anglocentric Twain’s world remained a little more than a century after the American Revolution: 10 points went to the player who had memorized the year of a monarch’s accession (e.g., James I, 1603); five points for battles (e.g., Waterloo, 1815); and one point for minor events, which in Twain’s own words included the Declaration of Independence.
Twain’s board game resembled a tax form and didn’t do very well. You can play this Twain-inspired version of it and decide for yourself.

Given Twain’s penchant for technology and anti-imperialist leanings, it’s perhaps not surprising that he looked critically on traditional fantasy. It culminated in Twain’s epic takedown of fantasy tropes in A Connecticut Yankee in King Arthur’s Court.

SPOILER ALERT: Twain pulls no punches in obliterating romantic notions of chivalry and honor. He goes further than that in the book on a scale that is familiar to game masters who have had players attempt to use their modern knowledge to get an upper hand. Protagonist Hank Morgan (the titular Yankee) takes on wizards and clerics in an attempt to modernize a fantasy world, and in doing so, causes a massive amount of collateral damage and deaths.

A firearms manufacturer by trade, Hank invents lightning rods, gunpowder, mines, and other modern weapons. His meddling culminates in the deaths of 30,000 knights, slaughtered by 52 men wielding Gatling guns. Trapped by a wall of dead bodies, Hank is eventually banished back to his own time thanks to a spell cast by Merlin.

Lew Pulsipher discussed the consequences of technological changes in a fantasy world – Twain’s story shows the fallout of rapid technological change in a single lifetime. In that regard Twain feels decidedly modern ... and the kind of player that might exasperate most game masters.
Click to expand...

Twain is a wonderful writer and figure! I had no idea he was technically a game designer.

I have A Connecticut Yankee... on my Kindle. Really need to get around to reading that.

Anybody who's read Philip Jose Farmer's Riverworld would not be surprised by the geek side of Sam Clemens...

I studied Huck Finn at school. It is a classic, for all its faults in a modern lens. I do love a good Twain Quote. Falsely attributed or not. My favorite... and appropriate for these boards...

One of the relatively low-tech inventions that Twain mentions in Connecticut Yankee is bicycles. There is no reason why people in a "medieval" fantasy setting couldn't make them, thus greatly speeding up travel along roads. It would make infantry considerably more mobile without having to worry about fodder for mounts, etc.

Twain was an interesting fellow. It's somewhat ironic people associate him with historical Americana when he was, as described, a huge tech geek, made a few patents, and was into cutting-edge technology like fingerprinting.

Not that it always benefited him. He went bankrupt investing in an early typesetter. (This is one of the difficulties of investing in new technology--sure, he correctly picked that mechanical typesetting was going to be a huge deal, but he didn't know which company was going to do it right.)