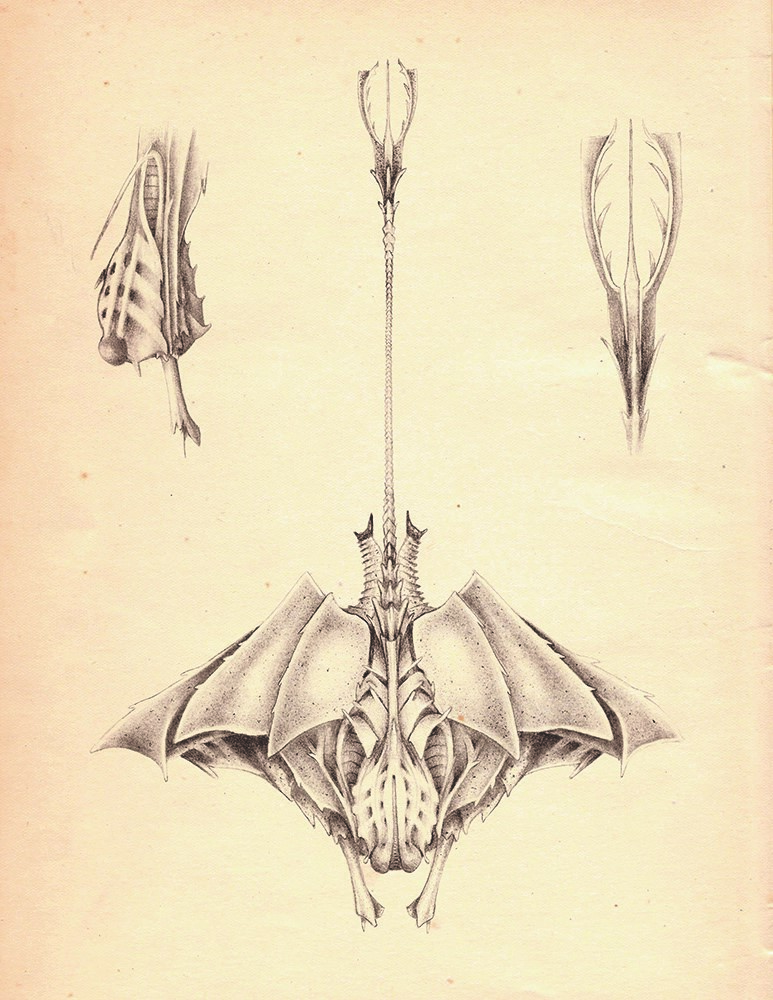 Exosketelal Alien by Josh Marlar​
Charlie Dunwoody (CD): What is your RPG design background and what is your favorite RPG work you’ve created?
Brian St.Claire-King (BC): I’ve been creating, designing and writing games for about two decades now, all under the auspices of Vajra Enterprises. Being a parent, I would never be able to say which of my games is my favorite. It would be too much like telling one of my kids that they’re my favorite.

CD: What is the history behind Vajra Enterprises and what part do you play in it?
BC: I started writing Fates Worse Than Death (pdf) , the first game I ended up publishing, in college. I sketched out a cover, and I needed something to put at the bottom for the name of the publisher, so I put “Vajra Enterprises,” figuring I’d go back later and put in something better. That never happened. (Vajra’s my middle name. My parents were Buddhist ministers and they gave me a Sanskrit middle name.) That made me the founder of Vajra Enterprises, and for most all of our books I’ve been either the author or co-author. I’ve given myself the title of “Creative Director” because, although I also do the business end of things, the part I really like is creating new stuff. I like to think of Vajra not as a game company, but a company that takes interesting settings and gives people multiple ways to explore them. RPGs are our main way so far, although we have made small forays into novels and comics. If I’m very fortunate, in the future people will be able to explore our worlds via movies or TV and video games as well.

CD: When you work on an RPG what matters the most to you? Story, solid mechanics, art, layout etc.?
BC: The first thing, for me, is to have a unique concept for the setting. It should be something dark and dangerous, with a lot of inherent conflict. Then I ask “who are all the badasses of this setting?” and that leads to character creation options. As dark, dangerous or scary as the setting is, the fact that there are badasses like the PCs out there gives hope that things could get better.

For our modern day horror game, In Dark Alleys (pdf), I set myself the goal of creating a horror game that didn’t have any ghosts or vampires of Lovecraftian entities. I created a unique cosmology, a how and why of the supernatural. I’ve always been a science nerd, so in my games even magic and the supernatural have to operate by consistent rules. The three sourcebooks I’ve created so far for In Dark Alleys have all been created by exploring what would work within the rules of the IDA universe. For This is a Dark Ride (pdf), I asked myself “what supernatural dangers could exist behind the scenes at Disneyland?” For Abandoned (pdf), I asked myself “what are the most interesting and dangerous abandoned places that could exist in the IDA setting?” And for my latest book, Dead Media (pdf), I asked myself “what are all the ways that old media items, such as videotapes or game cartridges, could be supernaturally dangerous in the setting?”

Art is really important to me as well, but I myself am an art fanboy, not an artist. So I seek out the artists whose work I really admire and pay them to create illustrations for my books. For Dead Media, I contacted the best artists I could find and asked them to do full page illustrations, one for each of the media items in the book, showing the item in the place it is most likely to be found, alongside the bodies of some of its victims. Describing something and then having a talented artist turn it into a real illustration is tremendous fun.

CD: What RPGs do you play and what are some of your favorites?
BC: When I have time to play, I’m mostly playtesting my own games. I like playing games at cons because I get to sample different game settings and different game systems. I collect obscure old games like Underworld, Continuum, Heretics and Unhallowed Metropolis, but don’t really get to play them. I recently Kickstartered The Magical Land of Yeld which I think is going to be a great game to play with family now that my kids are old enough to want to try gaming.

CD: Vajra Enterprises offers buy a PDF and we’ll donate a book to a non-profit. You also have a fan reward system. Where did these ideas come from and have both been well received?
BC: Fan Rewards lets gamers earn points, by doing the kind of stuff fans do, to get free books. I created the system because I think it’s a mistake to assume your most valuable customers are the ones who have the money to buy all your books. I remember being a poor high school and college student who couldn’t afford the dozens of supplements my favorite game companies put out. Although I didn’t have the money, I did have the time and enthusiasm to run those games, suggest them to people and talk about them online. All that stuff is just as important to a game line as individual sales. I wanted to reward that second type of activity, and make it so that someone who couldn’t afford to buy all our games could earn them by doing the kind of stuff they were already doing.

The buy-a-PDF-we’ll-donate-a-book program, and this will sound selfish, was because I had a lot of Vajra books in my garage, and I was waiting to get them all sold so I could start working on second editions, but I kept hearing from people that they’d rather have PDFs. (I don’t get that myself: I’m definitely a printed book person, with one whole room of my house devoted to RPG and other books.) So in the donation program, everyone benefits: the person who wants a PDF gets one, a charity (like Save Against Fear) gets a book, and I get one book closer to being able to work on a second edition.

The buy-a-PDF-donate-a-book program has been going very well. I’ve gotten a lot of sales and donated a lot of books. Not many people have taken advantage of the Fan Rewards program yet, but hopefully that means I’ve priced my books low enough that people feel they don’t need Fan Rewards points to get Vajra books.

CD: Do you have any upcoming RPG books you’d like to tell us about?
BC: Our next RPG, which should be hitting shelves this fall, is First Contact Team. Each time you play First Contact Team, it’s humanity’s first ever meeting with alien life, and it’s a different unique alien species each time. The game is a science mystery, where your job is to find out what the aliens are like, what they want, and how to communicate with them. Anyone who wants to know when that book comes out should follow our Facebook page.

CD: What innovations do you see as being important for future RPG development?
BC: Definitely Kickstarter and Patreon and other crowdfunding platforms. I think crowdfunding is revolutionizing not just RPGs, but all forms of media. For the history of modern media, you’ve had the guys with the money who sit in an office and for each new idea they say “Does this sound like something that has made money before? Are we confident we’ll earn our investment back on this one?” and they veto anything that they can’t imagine succeeding. Crowdfunding takes the ideas directly to the people and says “Do you want this?”

CD: Your RPGs mostly use unique mechanics. Did you ever consider using an existing rule set (Ubiquity or Powered by the Apocalypse for example)?
BC: Our games so far have used ORC (Organic Rule Components), or our light version, ORC-L. I created ORC because I wanted something as dangerous and realistic and human-scale as I was going for in our settings. Some people like ORC and some don’t. What I want to do in the future is publish our games using multiple rule systems, so that people can play using the rule systems they like, that support the styles of play they most enjoy. Eloy LaSanta of Third Eye Games has shown it can be done, publishing Apocalypse Prevention Inc. in both his PIP System and also in the Savage Worlds system. I’ve recently done a poll on our Facebook page to see what game systems people would like to play our settings with, and the results were very interesting.

CD: Many readers of EN World are D&D and Pathfinder players. What would you say if they asked why should they should try one of your RPGs?
BC: Pretty much every gamer I know started playing D&D. And if a friend were to call me up right now and say “want to play some D&D?” I would say “sure!” However, I think everyone who is in this hobby long enough starts wanting some variety. I love the Avengers movies, but I’m glad those aren’t the only types of movies that are being made. So, to D&D and Pathfinder players, I’d say: if the setting of one of Vajra’s games seems unique and interesting to you, check it out. We have several free versions you can check out at no cost.

CD: Any final comments you’d like to share with the readers of EN World?
BC: Thanks for reading!

Charles Dunwoody started playing and running RPGs with Advanced Dungeons & Dragons (before it was first edition) and is currently GMing Forbidden Lands. He wrote a few articles for Dragon Magazine when it was in print, wrote a bit more for Mongoose’s electronic Signs & Portents, and was paid for a supplement for Bulldogs! (d20 version) that was sadly never published. Currently, he freelance writes including articles for EN World and Geek Native. He also camps year round, backpacks, and canoes when not reading and writing. Charles is a participant in the OneBookShelf Affiliate Program, an affiliate advertising program designed to provide a means for sites to earn advertising fees by advertising and linking to DriveThruRPG.
Share:
Facebook Twitter Reddit Pinterest Tumblr WhatsApp Email Share Link
Forum list Post thread…