Eight teams of monsters are ready to battle in the MAUL Arena, all for a chance at glory! The Monster Arena Ultimate League is set to begin its first tournament this Saturday, LIVE on twitch! The Killer Kobolds will be taking on the goblin Firestormers in a single elimination bout! The winner will go on to the seminfinals... and the losers are otyugh food.

The Monster Arena Ultimate League is about to begin!

Tune in this Saturday at 4pm (PST) over at twitch.tv/JasonBulmahn to watch the game live, or catch in on Monday over on YouTube!

Monster Arena Ultimate League (MAUL) is played using the Pathfinder 2E rules on Roll20. Teams are made using the encounter building rules (as shown below) with each team consisting of 160xp worth of monsters balanced against a 1st level band of heroes. Games are played live on twitch and rebroadcast on YouTube. Join in to cheer for your favorite team, granting them a morale bonus, or even sponsoring a team with a hero point. 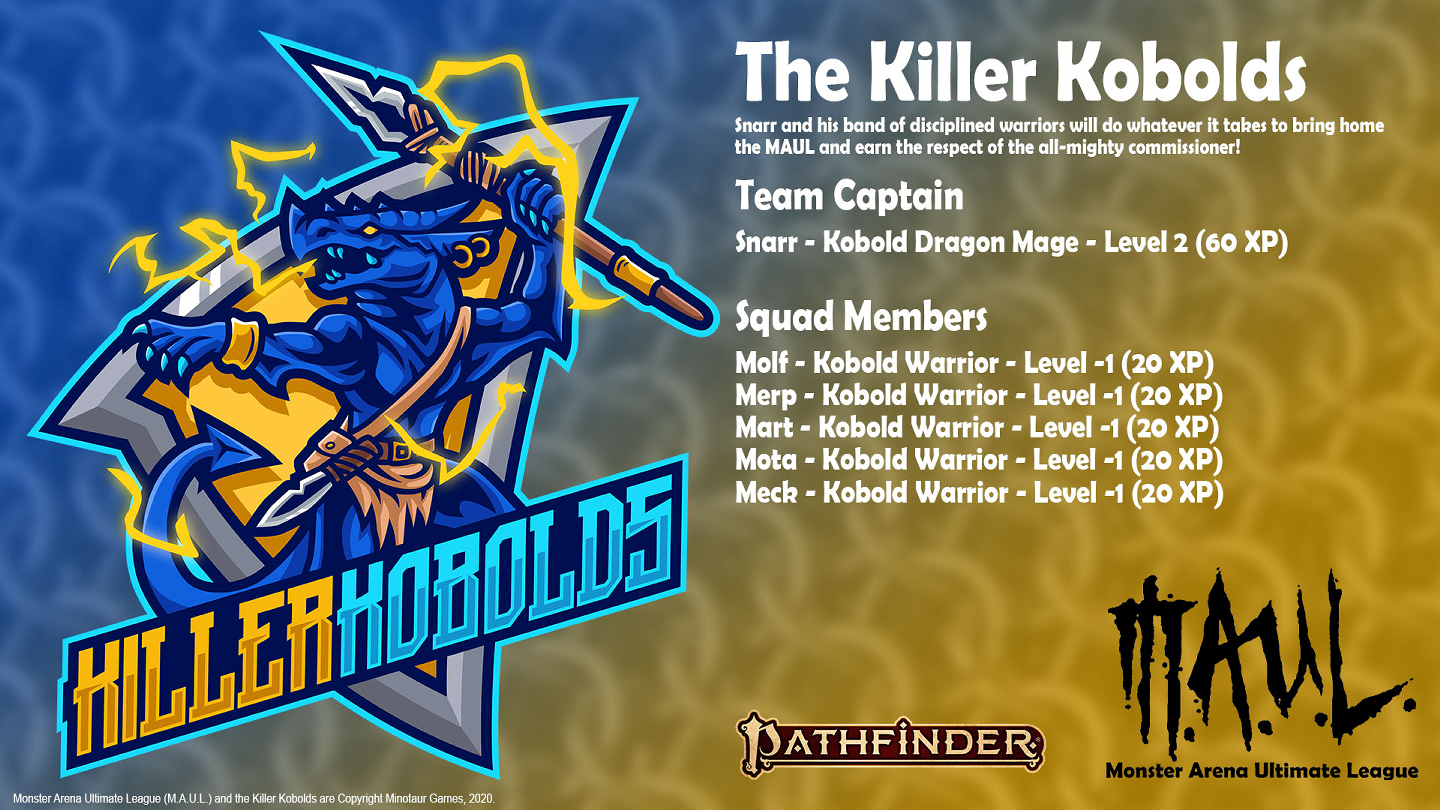 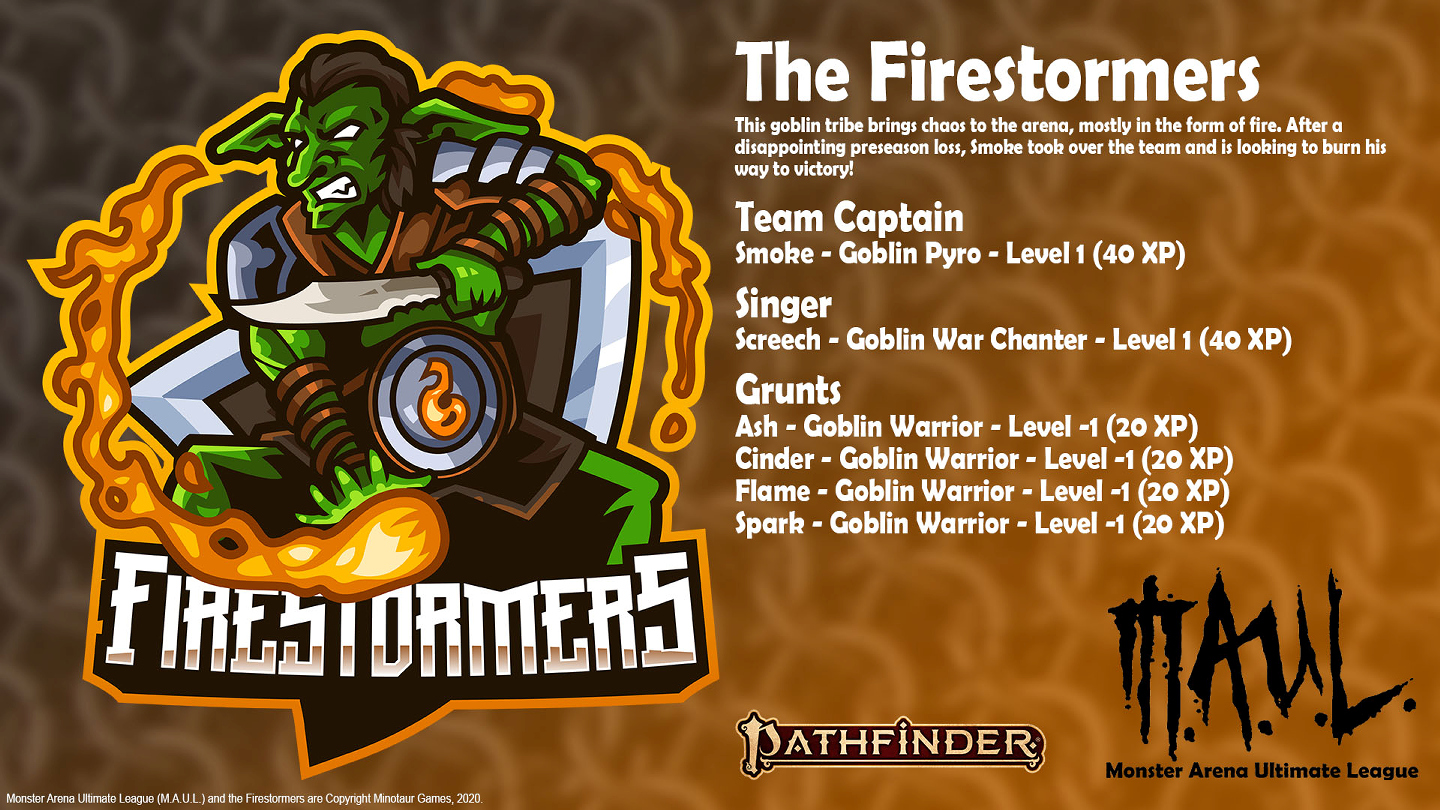 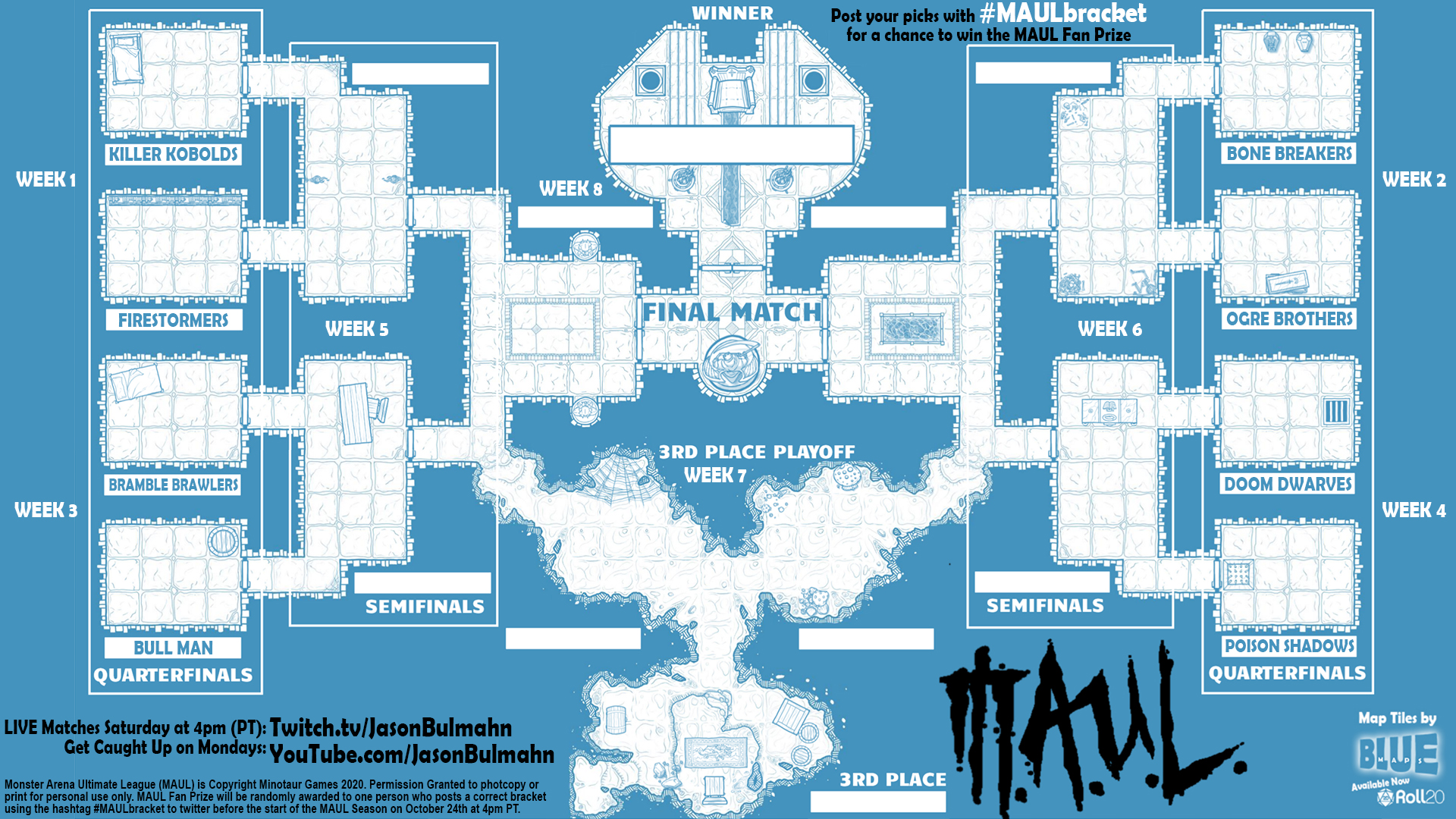 I've got a good feeling about Merp. I think this is his year to win it all.

Loved the Preseason!!! Looking forward to the season! I feel like the Bull Man has the good chance to bring home the title this year

Jason Bulmahn said:
The Killer Kobolds will be taking on the goblin Firestormers in a single elimination bout! The winner will go on to the seminfinals... and the losers are otyugh food.
Click to expand...

I would think both teams are otyugh food - after all, an Otyugh is level four, and most team members are five levels lower.

You can catch all four preseason matches on my YouTube to get a sense of what the show is all about. They start out a bit rough, as we were still working out the technical parts of airing a live arena combat game, but you can certainly get a look at all 8 teams and how the show is going to play out.

I am super excited for this to go live on Saturday, now as part of Roll20Con!

I find it interesting that when people talked about stuff like this for 5e people raged but pathfinder ... whoa so cool!

But, This looks cool! I love old school tournaments. I think there is a lot of room for this sorta of things in any system. Hope it does well.

Hmmmm. I’m a killer kobold fan but I don’t think they can make the finals. That being said, here are my picks:

Ages ago during the d20 blut, when anybody and everybody was creating some new monster of prestige class, my friends and I used to test them out in combat via arena fights. Nice to see this return with Paizo.

Just as a reminder folks,

We are less than 3 HOURS away from the launch of the first season of MAUL.

Tune in at 4pm (PST) over on my Twitch channel to catch all the action!

If you missed the broadcast on Saturday, you can now get caught up over on YouTube!

The MAUL tournament has been thundering along! You can get caught up over on YouTube with the following two matches!

In the second quarterfinal match, the Bone Breakers take on the Ogre Brothers! Both teams are widely seen and contenders for the MAUL title, but only one will make it out of this match to the semifinal round!

And just last weekend, the Bull Man faced off against the Bramble Brawlers, a group of fierce and terrifying Leshy! This one went DOWN TO THE WIRE!

The matches keep on rolling. Week 4 saw the conclusion to the quarterfinal round with an absolutely nail-biting match between the Poison Shadows, a band of drow, and the Doom Dwarves, a bunch of fanatical duergar!

And just this past weekend, we saw the start of the semifinal rounds! I will put the match link here inside spoilers, to avoid giving away who won some of the earlier matches!

In the first semifinal match, it is the Bull Man, taking on the Firestormers! Can a band of fierce goblins take down a minotaur?