We’re getting royal again on Mythological Figures and going back to one of England’s most famous and written about queens, the love of Lancelot and wife of King Arthur: Lady Guinevere! 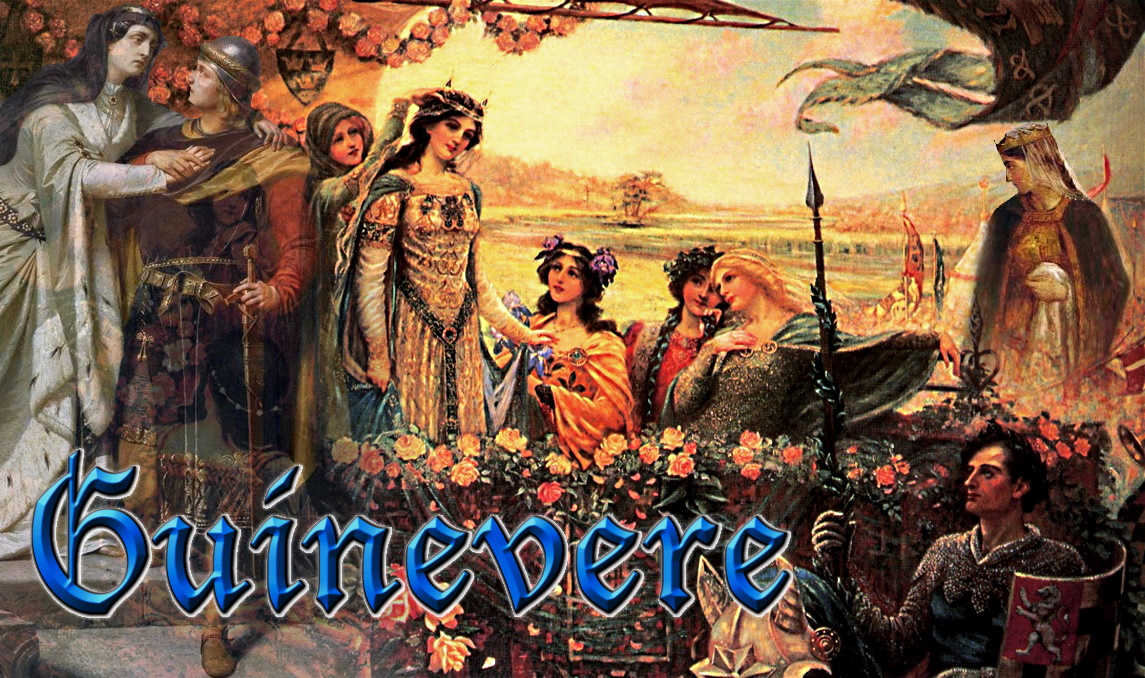 For the most part Queen Guinevere was a great beauty yet childless, though depending on the tale that’s not necessarily so. In Perlesvaus (a French romance) and Parzival (a German poem) she bears Loholt or Illinot from Arthur, and in the Alliterative Morte Arthure her affair with Mordred produces two sons that Arthur orders to be killed. Although not related to her by blood, in the Livre d’Artus she raises the daughter of a knight of the round table (Sagramore) bore by a woman named Senehaut. She was also not a single child herself, having a number of sisters (which change based on the specific story), one of which at one point was an evil twin. In the earliest tale with a date (1136) Guinevere was left in Mordred’s care while Arthur went off to war—only to wed her himself and declare himself King! Arthur returns and tries to the throne back in the Battle of Camlann, suffering a mortal wound there and dying.

This is definitely a character that is who she is depending on the stories being read. Sometimes Guinevere is praised and laudable for her kindness, intellect, and civility while in others she’s portrayed as a tempting adulteress plotting revenge upon those who spurn her advances. One of the more common bits among tales about her is that Guinevere does not handle bad news well; when she learns of Arthur’s death she dies, when she learns of her son’s death she dies. One of the weirder stories has her as a wicked ruler beside Morded, ultimately killed by Lancelot (who by then is the last of the Knights of the Round Table) and then eaten by her entombed king before he too perishes. Another common thread in the history of Guinevere is her abduction though of course the details there change a lot, both by who saves her (Arthur or Lancelot) and who’s doing the kidnapping—maybe Melwas the king of “Summer Country” (Somerset?), or possibly Maleagant, or Valerin (King of the Tangled Wood), or her brother Gotegrim, or King Urien.

Speaking of Lancelot, somewhere a few hundred years after she first appears in the lore a love triangle is established between him, Arthur, and Guinevere. There’s a great deal of speculation about it, but it seems like the first author to make this connection may have done so to please the people he was writing for (a court of well-to-do socialite women) and the horrendous reputation King Morded had by that time. It’s love at first sight for her, and it’s not like Arthur was faithful (sleeping around with a Saxon princess or Guinevere’s evil twin sister) although again this may be a matter of authorial intent to further justify the relationship between her and Lancelot.

Design Notes: What with her being so gosh darn good looking and manipulative it’s easy to figure that Guinevere has bard levels, and probably the archetype most to do with being pretty. Given the levels Arthur and Lancelot have, 10th feels like a good spot for her although her power levels are generally going to be on the low side because she is definitely not a flashy spellcaster. That said she’s not bad with magic by any means, and is certainly capable of keeping any affairs or illicit relationships quiet. Let’s do the numbers! There’s not much going on in the way of direct offense for Guinevere so she scored pretty low on both counts—the DMG put her at 4.5, the Blog of Holding a little more generously at 5.875, which averages out comfortably at CR 5.

Background: Noble. Due to her position as a ruler, Guinevere is treated with a measure of respect wherever she goes. She is treated as royalty (or as closely as possible) by most peasants and traders, and as an equal when meeting other authority figures (who make time in their schedule to see her if requested to do so).

Bardic Inspiration 1d10 (4/Short Rest). As a bonus action on her turn, Guinevere can choose one other creature within 60 feet who can hear her. That creature gains one Bardic Inspiration die, a d10. Once within the next 10 minutes, the creature can roll the die and add the number rolled to one ability check, attack roll, or saving throw it makes. The creature can wait until after it rolls the d20 before deciding to use the Bardic Inspiration die, but must decide before the GM says whether the roll succeeds or fails.
In addition, Guinevere can use a bonus action to expend one use of Bardic Inspiration, choosing up to 5 ally creatures she can see within 60 feet. These creatures each gain 11 temporary hit points and, if they so choose, can use their reaction to move up to their speed without provoking opportunity attacks as long as they move towards Guinevere by using the safest and shortest route.

Captivate (1/Short Rest). When Guinevere performs a recital for at least 1 minute, at the end of the performance she can choose 5 humanoids that are within 60 feet and who observed the entire performance. A targeted creature makes a DC 17 Wisdom saving throw or is charmed by Guinevere for 1 hour, until taking damage, or until she attacks it or it witnesses her attacking one of its allies. While charmed, these targets idolize Guinevere, hinder her opponents, and speak her praises—they do everything to help her short of engaging in violence unless they were already predisposed to do so. Creatures that successfully save against this feature do not realize that Guinevere attempted to charm them.

Countercharm. As an action, Guinevere can start a performance that lasts until the end of her next turn. During that time, Guinevere and any friendly creatures within 30 feet of her have advantage on saving throws against being frightened or charmed. A creature must be able to hear her to gain this benefit. The performance ends early if she is incapacitated or silenced or if Guinevere voluntarily ends it (no action required).

Jack of All Trades. Guinevere adds +2 to any ability check she makes that doesn’t already include her proficiency bonus.

Majestic Power (1/Long Rest). Guinevere can use a bonus action to unleash fey power for 1 minute. For the duration, on each of her turns she can cast command as a bonus action. These castings do not use spell slots. In addition, while this feature is active any creature that is charmed by Guinevere automatically fails its saving throw against her command spells.

Song of Rest. At the end of a short rest, if Guinevere or any friendly creatures who can hear her performance regain hit points by spending one or more Hit Dice, each of those creatures regains an extra 1d8 hit points.

Spellcasting. Guinevere is a 10th level spellcaster that uses Charisma as her spellcasting ability (spell save DC 16; +8 to hit with spell attacks). She knows the following bard spells:

And then there's the version of events where Arthur has three successive queens, each named Guenevere, whether that just happens naturally or because people keep calling her by that name.

Indeed! These major mythological cycles always have several versions of the same event. Apparently when Lovecraft and co. were making up their mythology they actually were ambiguous about some of the gods and such to reflect that--it didn't get codified until Sandy Petersen with the Call of Cthulhu RPG.