Easily kick off a new campaign in 2023. Strange Tales of Songling (PDF) provides a supernatural campaign of horror inspired by Strange Tales from a Chinese Studio by Pu Songling and the movie A Chinese Ghost Story. PCs stumble into mysteries in haunted locations. Campaigns last ten adventures and surviving PCs can pass any accumulated gear down to a new generation. 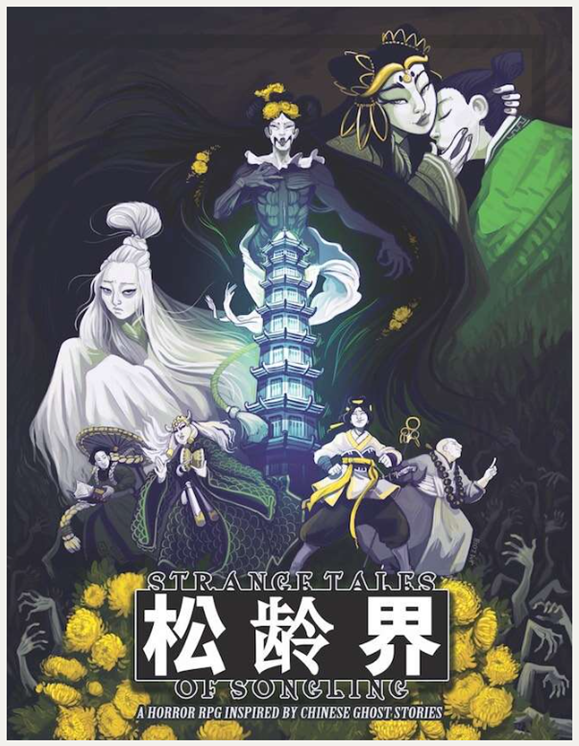 My thanks to Bedrock Games for providing me a PDF of the game. It is so good I ordered a print copy of Strange Tales of Songling, requested an English translation of Strange Tales from a Chinese Studio from my library, and plan to watch all three chapters of A Chinese Ghost Story on Amazon. These ghost stories seem like the perfect thing for a snowy winter break and I love the combo of RPG, book, and movies.

The system is fast and dangerous just like combat in the movies. A pool of d10s is rolled with one number picked trying to hit a target number, usually 6. A natural 10 is a Total Success (special effect). PCs have two Wounds and when they are lost, they start to die.

PCs choose from Demon Hunter, Scholar, Ritual Master, and Wandering Sword. The four paths have powers including Magic Techniques, Kung Fu Techniques, and Rituals along with Skill Increases. Neck Cleaving Strike, Demon Sutra, and Roast Piglet Demon are all powers. Many Rituals are dark and some require killing a human being to enact the magic. It extracts a price, with all Ritual Masters eventually losing one Max Wound at ninth level. PCs advance one level after each adventure, eventually either getting killed or making it all the way to 10th level and a worthy retirement. Gear and Objects of Power can be passed down to the next generation.

PCs may pick up Objects of Power like Fuxi’s 100-stringed Zither of Sorrow and the Tiger Robe of the Mountain. Plucking the zither brings on sadness and a possible skill check penalty while donning the robe turns the wearer into a tiger for an hour! There is no armor in the game but Hardiness covers a PC’s ability to reduce damage. Mundane items range from swords to tea sets to cobra venom. 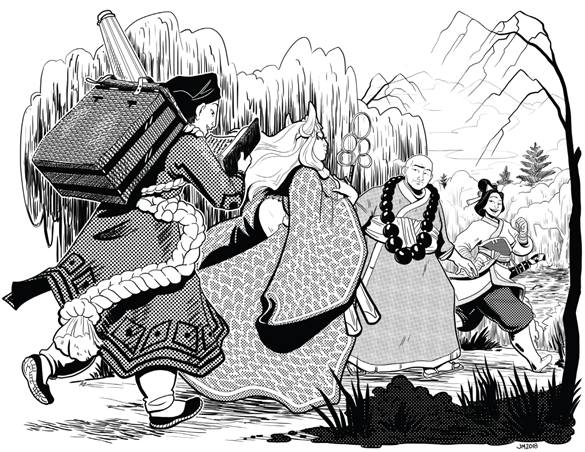 A GM has plenty of tools to run a new campaign. Campaigns normally span ten adventures, with each completed adventure advancing surviving PCs one level.

Campaigns can be set in the Wandering Heroes of Ogre Gate world of Qi Xien, in historical China, in the World of Songling, or in a homebrew setting. The World of Songling is the ghostly remains of Pu Songling’s studio which draws in locations and stories of the bizarre. The setting is timeless and made up of weird places and people who appear and disappear as if a haze covered everything. Many other location options are explored.

Songling could even be Diyu (Chinese Hell). The PCs might land there after a TPK (total party kill) in another RPG. Each level and adventure represent one of the ten courts of Diyu. When the World of Songling campaign reaches its end, the players make new characters in your original setting or maybe the dead PCs spring back to life! Running a Songling campaign to bring back a wiped out party sounds amazing. Dungeon Crawl Classics RPG referees take note.

The default theme is monster of the week, with PCs stumbling into a haunted location with a mystery to unravel and a monster to uncover. Occasionally, this supernatural happening may occur on the PC’s home turf, heightening the tension and the stakes. Other themes are presented as options as well.

GMs are armed with plenty of advice of running horror campaigns in general and Songling campaigns in particular. The GM is also given NPCs and monsters. So many monsters. Ghosts. Vampires. Demons. Bandits. Bears also seem to have some weight in this setting. Bears of intelligence. Spirited bears. So many conflicted and haunted beings for PCs to interact with.

A great example is the Tree Spirit. This monster is featured in A Chinese Ghost Story. Like in that movie, the Tree Spirit not only has its own fearsome attacks but it also can control ghosts whose bones are buried by its roots. It might control a Bitten Ghost which the PCs think is the main problem of an adventure only to discover the Tree Spirit is the true threat forcing the ghost to do its bidding.

In addition, the GM gets nine adventure seeds and four full adventures. Combined, these are more than enough to run a full campaign if the GM fleshes out six of the adventure seeds. There is also a comprehensive suggested reading and viewing list including both fiction and non-fiction to help the GM run a campaign more effectively and, if set in historical China, more accurately.

I can’t recommend this RPG enough. If you like the ideas of ghost stories on a cold snowy night then look no further than Strange Tales of Songling. Your players can be up and running quickly, you have a starter adventure ready to go, and additional support to keep a new campaign running. And if you happen to be reading this after winter ends, these tales certainly work in all seasons. Bring in rain, bring in wind, bring in scorching heat to set the scene, isolate the PCs, and then let the monsters run loose. The PCs will have to work together to win the day and even then, not all of them may survive to the end.
Click to expand...

Thanks for the great review. I am glad you enjoyed it!

If anyone needs more material for a campaign I put up some resources on the blog:

There is a Strange Tales adventure called Head of the Teahouse and there is a small sandbox called The Starlit Inkstone.

I did a series for Wandering Heroes of Ogre Gate that provided monsters, adventures and other content for about 100 Pu Songling stories. This used the original Ogre Gate system so it would take some adjustment to fit to Strange Tales of Songling.

Interesting. A Chinese Ghost Story (the original movie) is one of my all time favourites.

Strangely enough, my group just voted to return to our Strange Tales of Songling campaign as our next game. It really is a great game.