No Players? No Problem: Try These Solo Adventures!

If you need to while away some hours, here are five free (during spring 2020), plus two more under $10, solitaire RPG adventures to try. Rules used include Call of Cthulhu, The Dark Eye, and Tunnels & Trolls. 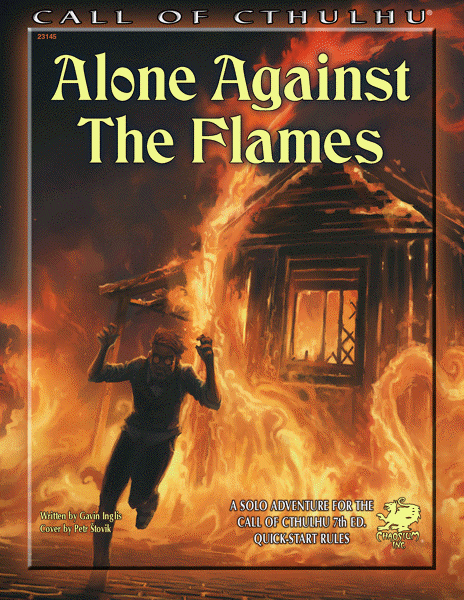 Alone Against the Frost, $9.99, is a difficult challenge as you play a professor riding herd on a gaggle of graduate students and a guide in the wilds. Getting out with your reputation or even your life is not guaranteed. The adventure provides a frightening and fun experience. Frost captures the dangers of exploring the wilderness especially canoeing and encountering otherworldly horrors out of time and space.

I haven’t run The Dark Eye - The Vampire of Havena yet but it sounds fun. I decided to start with The Dark Eye - Conspiracy of Mages which I was happy to find had a pre-gen wizard to play. The PDF is clickable, meaning you click on the number you want to go to and the page auto advances there. A great enhancement.

This adventure is unique. You are trying to take a test and pass to become a full-fledged wizard at a wizard’s school. But first you get sick and have to delay taking your test and then your testing wizard disappears on a day that most of the teachers and students are off campus. Armed with seven spells, you investigate. And what an adventure! At one point, you have thirteen options to pursue but with a timeline. I haven’t finished this adventure yet, but it is amazing and inspiring. I may want to run my own magic school campaign someday. The Dark Eye seems intimidating (you roll three d20s for skill checks!) but this adventure makes it easy to give the game a try.

Tunnels & Trolls
Tunnels & Trolls has a T&T Free Rulebook and two free solo adventures: Four Jars of Mead and the Temple of Issoth in TrollsZine 3. You have to make your own character, so you’ll need the free rules or use this: Tavernmaster Games: Pre-Rolled Characters for Tunnels & Trolls Vol. I. I haven’t played Temple yet but I did play Mead.

I’m playing Ojvai, a human warrior skilled in martial arts and swordfighting. I am an Agent of the Death Goddess, a minion of Lerotra’hh, and currently an errand doer for Korkorum, the Master of Transport. He sent me way over to the Great Marketplace in downtown Khazan.

I had to go buy four jars of mead so I tried to find a friend who was a Leprechaun who could teleport me but my luck was bad and he was away so I had to run. I wasn’t speedy enough, I was only able to buy two jars of mead, and I was late returning so my master had some Trolls beat me up. One, ow. Two, making Saving Rolls is hard without the right Talent. Three, what a world! Leprechauns and Trolls and the dangers of big city life (reminds me of Talisman the Board Game actually). I’ll play this one again and now I’m tempted to check out Tunnels & Trolls V5 or Deluxe Tunnels & Trolls which I’ve never played until now.

Without spending any money I have five solo adventures to play in three different game systems. I really appreciate having these RPG options available. I’ve tried two new RPG systems and had a lot of fun doing so. Hopefully these solo RPG adventures get you through any slow days you may have.
Click to expand...

Rogue Genius Games has one called The Duskwalker's Due. It uses Pathfinder 2e rules.

I solo roleplay. I have to mention The Solo Adventurer's Toolbox (by Paul Bimler) if you want to create your own adventures from scratch. It was written for D&D5e but will work for any other system really. It is a road map on how to solo role-play. The Solo Adventurer's Toolbox - Want to travel in a world where the fall of the dice can make things appear randomly? Get completely lost in this book w An exemple of «from scratch solo role-play» on my humble blog. Using Fantasy AGE (Green Ronin) and The Solo Toolbox:

Using FANTASY AGE RPG by Green Ronin Three intrepid heroes have been sent to find and rescue the mayor of Daggenberg. According t...

Tunnels & Trolls has a ton of solo adventures.

Another recommendation I'd add is The Skeletons RPG. It can be played solo, though naturally it comes to life (er, undeath) the more players you have.

One of my favorite writers of free adventures recently published this solo for both GURPS and 5e: 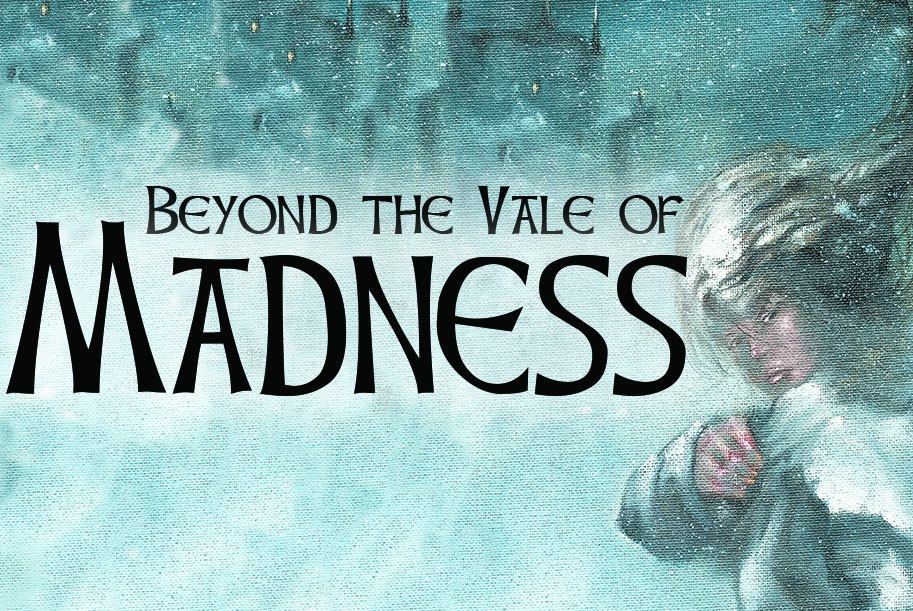 Beyond the Vale of Madness

Shout out to the Fighting Fantasy gamebooks, which are back in print once again and are among the oldest solo games.

And a big thank you to everyone for some great links, I'll be giving them a try.

Great stuff this. Have you all tried out Shawn Tomkin's Ironsworn RPG? The PDF is free on DriveThruRPG and it offers solo play using random tables called oracles.

There are three ways to play including solo mode. 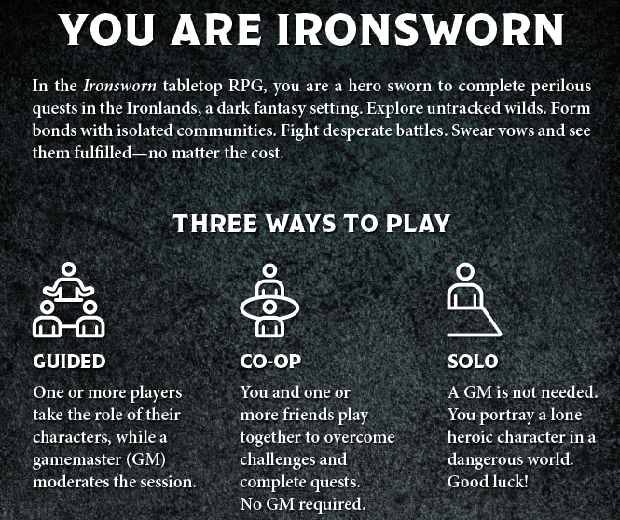 Supporter
I have done a podcast review of two solo games: House of Vermin and Chronicles of Arax. Both you can get for free on drivethrurpg. I am not much for solo gaming myself. One I would like to do is Zozer's Solo for Cepheus Engine. Over at Hyperlight Drifter they are working on solo rules on their discord channel, which I think makes a lot of sense for that game. If you have not checked out Hyperlight Drifter the video game, I suggest doing so, if not just for the awesome visuals.

I have been enjoying the Tunnels and Trolls Adventures app from Meta Arcade. Great fun solo adventures, easy T&T system (I had never played T&T - it's super simple and easily learned in the app). The adventures can be had for free, but you do need to sometimes click on a video at to watch to get more hearts to play more adventures. Which is not a bid deal.

Mistwell said:
I have been enjoying the Tunnels and Trolls Adventures app from Meta Arcade. Great fun solo adventures, easy T&T system (I had never played T&T - it's super simple and easily learned in the app). The adventures can be had for free, but you do need to sometimes click on a video at to watch to get more hearts to play more adventures. Which is not a bid deal.
Click to expand...

I had no idea that existed. Awesome.

Whizbang Dustyboots said:
I had no idea that existed. Awesome.
Click to expand...


They have been converting and adding new adventures pretty often over the last year. It's actually a pretty well supported App...which nobody seems to know about.

What I found most interesting is there is a real story that develops across the 16 main adventures. The story is gripping, and worth replaying to see how things can go differently. You get a good feeling for the setting. I'd run D&D in that setting!

The non-core adventures outside the numbered 16 also mostly take place in that setting. Sometimes they come at it from the perspective of foes from the main 16 adventures.

Some top notch stuff in there. Worth playing. Particular at the cost of "free", though I ended up kicking them a few bucks eventually.

Tunnels & Trolls Adventures lets you play gripping interactive fiction adventures. These are addictive, narrative driven games filled with the richness of pen & paper RPGs. Play for FREE with your hearts or own your adventures with gems.
tunnels-and-trolls.metaarcade.com

Sounding my own horn, I also suggest my own line of Four Against Darkness books, all available in PDF and print and very popular. The core book is a nostalgia-infused, procedural dungeon crawler, the more than 20 supplements available work more like solo adventures or campaigns with procedural and "scripted" parts. www.ganeshagames.net or www.gumroad.com/ganeshagames or just look for ganesha games as a publisher on Drivethru.