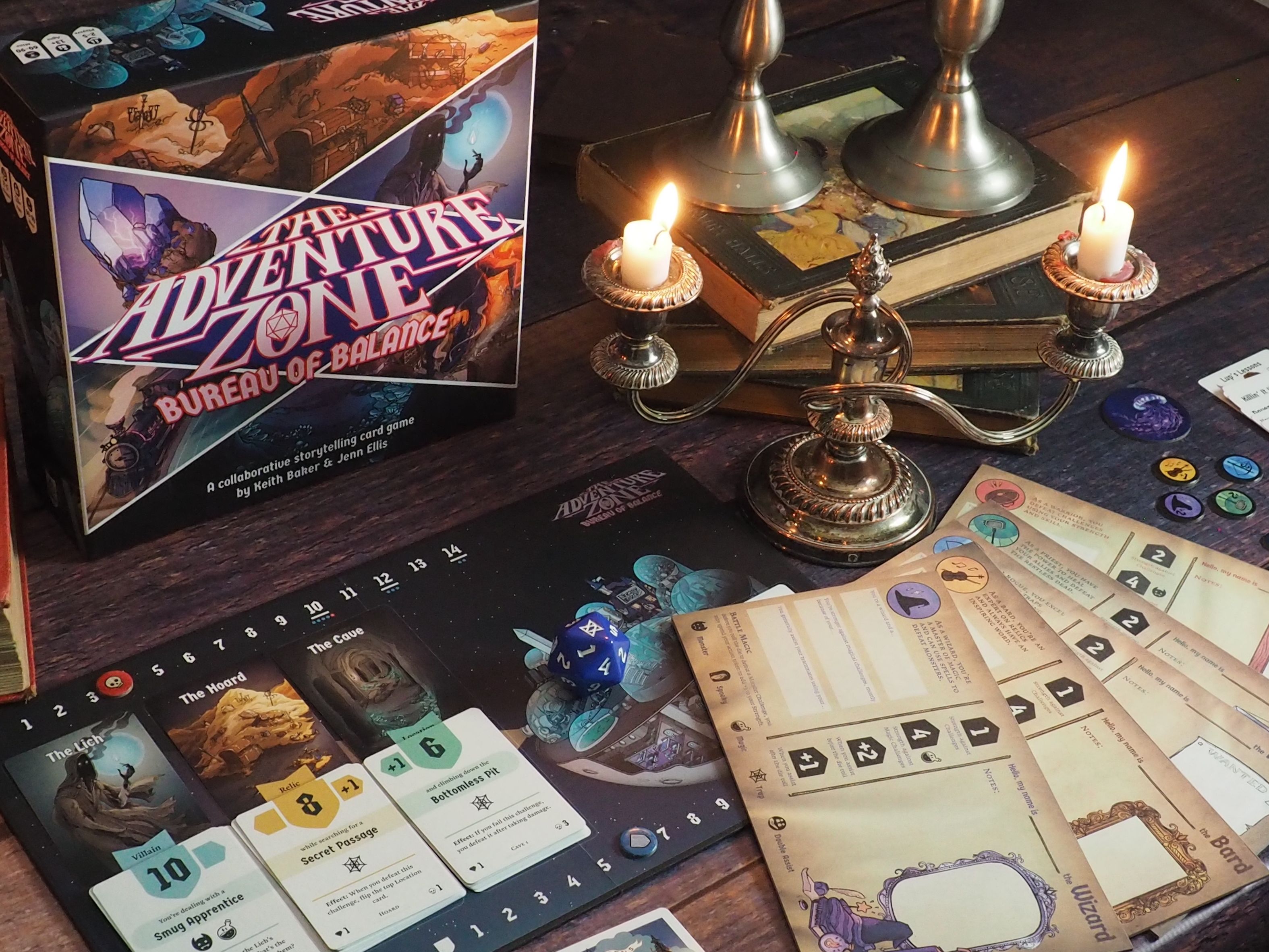 It was only a matter of time before actual plays spun off games based on their worlds. Critical Role, the 800-pound gorilla in the room has two books for fans looking to game in their world; the Tal’Dorei Campaign Setting from Green Ronin Publishing and last year’s Explorer’s Guide to Wildemount from Wizards of the Coast. It seemed like the comedy podcast The Adventure Zone would have gone a similar route as their most famous campaign, the Bureau of Balance, began as a lark playthrough of the Lost Mine of Phandelver adventure from the Dungeons & Dragons Fifth Edition Starter Set. Instead, they’ve teamed with Eberron creator Keith Baker’s company Twogether Studios to release their own spin on an RPG boxed set.

Bureau of Balance uses the same basic premise of the original podcast storyline. Players are members of the mysterious Bureau of Balance tasked with recovering artifacts of massive power for safekeeping. The game is primarily a GM-less experience, with the Team Leader role playing an agent while also being the one to keep the story moving forward. There is an option for more of a GM/facilitator role if there are six players. One player takes on the role of “Brad from HR” and the game takes on more of a post-action report frame.

Players take on one of five roles; Warrior, Rogue, Wizard, Bard and Priest. Each has a type of challenge they are strong against and comes with a few questions to help sketch out a character (along with a space to literally draw your character). There’s a nice touch on the back of the sheet with choices to pick as answers for the questions. I know they went with a pad of tearaway sheets to likely keep costs down, but I would like to see game elements like this use laminated cards and markers instead. It seems less wasteful for a game like this which is geared toward one shot play.

The mission is constructed by choosing three decks; the villain, the relic and the location. Each card in the deck has a specific challenge which all cleverly combine together into a sentence describing the current narrative situation. For example, you might be Pursued By Skulking Cultists...Carrying A Fragile Vase...While Crossing A Narrow Bridge. There are some ways to suggest mixing and matching these cards and there’s always a challenge to keep things fresh when you’re playing fixed decks. The challenge cards are double sided which helps, but the real freshness will be in how creative players get in handling these problems.

Each of the three challenges has a type and difficulty number and it is up to each player on their turn to describe how they are trying to take on one of the challenges. Then they roll the dice, add the number rolled, and if it's equal to or better than the number they succeed. Success lets the player claim the card as loot and they can turn in 3 challenge cards at Fantasy KostCo (where all your dreams come true) for a random equipment card.

If the players clear out all three decks, they win. Failure means the team heath takes a hit and if the health runs out, everybody fails the mission. I like that the rules tell players to frame a final scene regardless of victory or defeat. New players often assume that failure means death and shaking that lesson early on is a good thing. There’s also a decent page of starting team leader/DM advice to keep the pace going and to remember to work together to tell the story.

For the most part, there’s very little knowledge of the podcast required to play the game. Fans will recognize some pieces of equipment and callbacks in a few of the challenge cards. The main references to the show come in the surprise cards which are mixed into the challenge decks. These are cards that offer an ongoing bonus or a one-time larger bonus that are framed as advice or assistance from characters in the show that the players are supposed to create. It’s an interesting way to include people like Magnus or Taako without overpowering the players. Including these elements are one of the big challenges of licensed games and Bureau of Balance handles it well.

Bureau of Balance aims at fans of the podcast who haven’t already dipped their toes in Dungeons & Dragons or perhaps tried it and got turned off by the rules. The game covers that audience well, but it also works with a few others. On its own merits, the game is a decent shared narrative very rules light storytelling RPG like Fiasco or Quest. It can be played by people who don’t know the show but maybe want to hang around and fight some monsters without busting out the full Dwarven Forge kit. The simple setup also works great for gamers with kids who want to start on the road to playing as a family but don’t have patience to explain things like spell slots or bardic inspiration to the little ones. The Adventure Zone showed the joys of gaming with family and this game may extend those benefits to your family too.
Click to expand...

It still puzzles me that they don't have a Bureau of Balance book for 5E, using the de-IPed version of the world they used for their comics adaptations.

Whizbang Dustyboots said:
It still puzzles me that they don't have a Bureau of Balance book for 5E, using the de-IPed version of the world they used for their comics adaptations.
Click to expand...

Lots of work for something that is basically "generic Dungeons & Dragons gameworld with Adventure Zone jokes in it". It isn't the kind of fully fleshed out world that Matt Mercer has for Critical Role - the book would basically be a pamphlet or would have a whole bunch of stuff that isn't connected at all to the story. The world isn't all that interesting since it is so generic IMO.

Jer said:
Lots of work for something that is basically "generic Dungeons & Dragons gameworld with Adventure Zone jokes in it". It isn't the kind of fully fleshed out world that Matt Mercer has for Critical Role - the book would basically be a pamphlet or would have a whole bunch of stuff that isn't connected at all to the story. The world isn't all that interesting since it is so generic IMO.
Click to expand...

Acquisitions Inc. was worth doing.

And a Bureau of Balance book could have a bunch of new monsters, expanded vehicle rules (race cars made out of giant plants, etc.), time travel, etc.

New Playsets Aim To Make Your Next Game Night A Fiasco