It seems every RPG Kickstarter claims to do something different. Most aren't, but Orun by New Agenda Publishing definitely is — a “Post-Apotheosis, Afro-futuristic Sci-fi RPG mixing Mysticism and Adventure to create a unique gaming experience.” 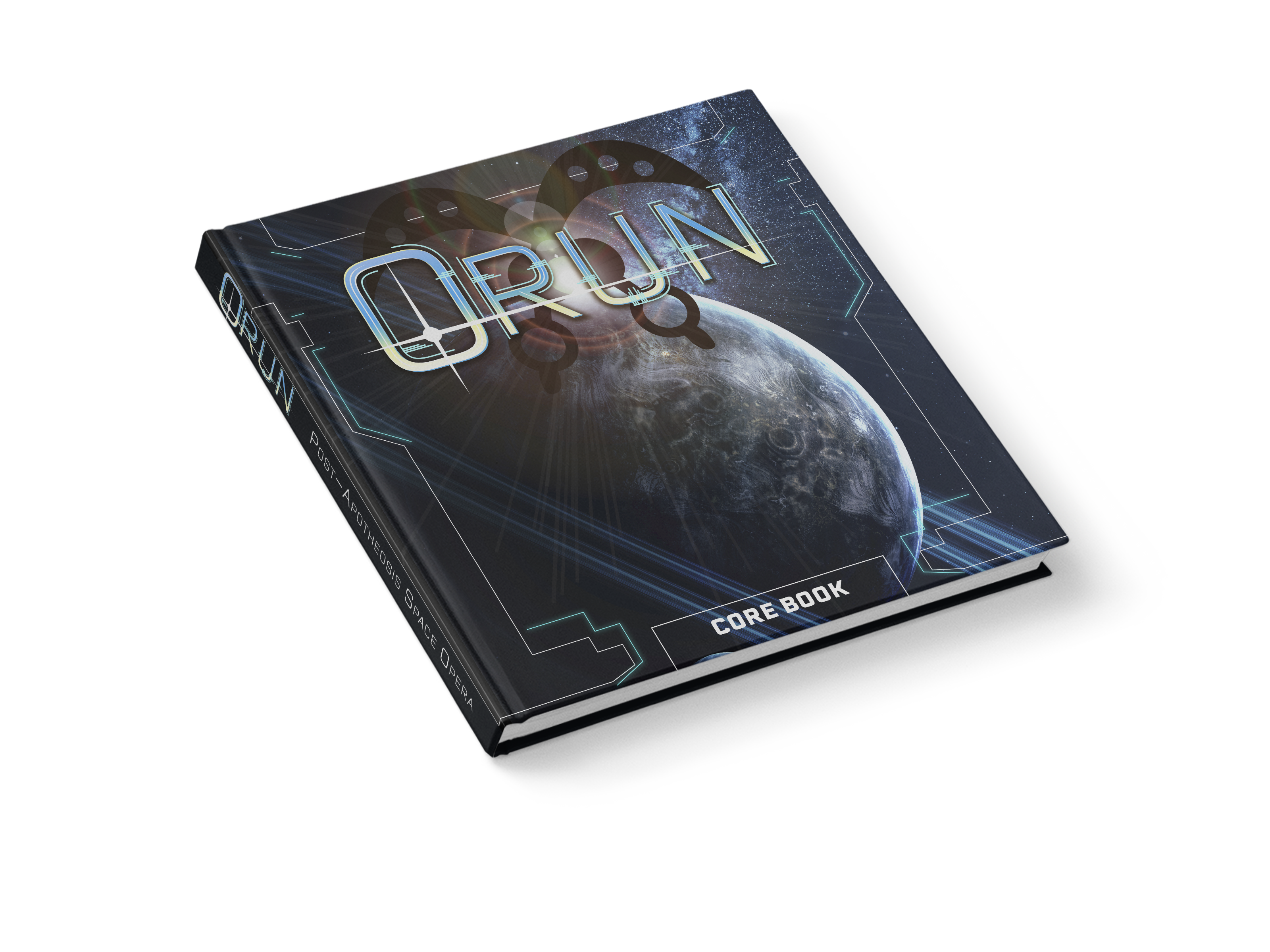 ​
If you've never heard of New Agenda Publishing, that's because Orun is its first project. Founders Misha Bushyager, Jerry D. Grayson and Eloy Lasanta have decades of game industry experience between them. Bushyager has written for Chill: SAVE, Lovecraftesque and Dead Scare and was an editor for the award-winning nanogame collection #Feminism. Grayson designed GODSEND Agenda, HELLAS: Worlds of Sun and Stone, and ATLANTIS: The Second Age. Lasanta is the ENnie Award-winning creator of Part-Time Gods, The Ninja Crusade, and AMP: Year One.

Considering their talent it's no surprise the trio decided to do something fresh for NAP's first project. 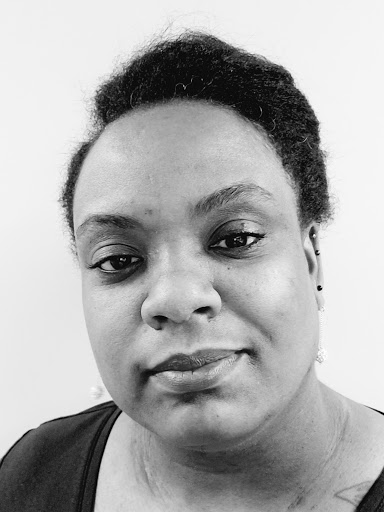 “We wanted a setting that all sorts of people would be drawn to and still be able to put our spin on it. It became clear all of us loved Star Trek and Star Wars, so we came up with something that reflected the elements we identified with most from those properties: exploration, struggle for good to triumph, new and different species and cultures, and space,” said Bushyager.

Don't mistake Orun for typical space opera. The back story involves beings called Orisha who led the way to apotheosis – transcendence from the physical reality. In our world, Orisha are deities in the Yoruba tradition, which influences Orun.

“The idea was to give the game a new non-Western baseline. The Yoruba culture and religion were great inspirations. The Yoruba strive self-improvement for the betterment of self and society. Our 'Iwa' concerns our behavior and character, or innermost being, or soul,” said Bushyager. “Improving our Iwa betters not only ourselves, but our culture and society. In Orun, heroes have a civic, moral, and cultural responsibility (on a cosmic scale) to make reality better. In Orun, ascension doesn’t exist for personal glorification, but for the betterment of the universe.”

It also gives Orun a different tone from grimdark or post-apocalyptic games.

“One of the things I dislike about post apocalyptic settings is the lack of hope. I want people to aspire to something better, not descend into despair,” said Bushyager.

As befits a new project from a new company that even has “new” in its name, Orun features its own rule set. Called the Horizon System, the mechanics have a classic sensibility yet have a modern, streamlined feel. Players can try it now with ORUN, Post-Apotheosis Space Opera RPG QuickStart. It features five of species available from the aquatic B'Bocci to the Alimnuro, who are energy beings, but the full version of Orun features 11.


View attachment 102764
Jerry D. Grayson
​
“We've got some fun things with the others. A plant-based species, a quadrupedal one that uses telepathy and telekinesis, a tiny aggro species in mechs, a paired symbiotic combined species, a chimera species, and an automaton construct 'species,'” said Bushyager.

Both the Quickstart and Kickstarter demonstrate a rich setting with much more to come, so I had to ask the creators what their favorite parts of Orun are.

“I’d have to say the array of species. When we planned them out they each had a touchstone to us that resonated. And I'm constantly amazed at the artwork that come back to represent them. It's never what I expected, but I always love it,” said Bushyager.

“That bad thought and memes have a physical manifestation in the form of corrupted souls and a warping of reality,” said Grayson.

Last year, NAP held a contest to recruit its writing team and discover new talent, which represents one of NAP's founding principles.

“We put our money where our mouth is. We don't just talk the talk of diversity and inclusion, we walk the walk and actually do the work of bringing in new voices.” said Bushyager.

This article was contributed by Beth Rimmels (brimmels) as part of EN World's Columnist (ENWC) program. If you enjoy the daily news and articles from EN World, please consider contributing to our Patreon!!
Last edited: Apr 30, 2021
Click to expand...

I like Jerry Grayson's Atlantis: The Second Age stuff... so this piques my interest.

So let me guess, a nuclear war wipes out Western Civilization and probably East Asian Civilization as well, since China is the other superpower, leaving Africa.


It’s as if someone didn’t even read the title of the thread. I wonder what made them come to the conclusion above.

This is 500 years after humans already established a galactic civilization - however long that took. After that much time, old one-planet nation-state stuff like 'China', 'America', 'Russia' are just distant memories you might find footnoted in a history disc.

DMMike said:
+1 for making WAR an attribute (hooah). +1 for a slender skill list, too.
Click to expand...

Staff member
I’m glad to see something like this. Not just for what looks to be a refreshing take on space opera, but because this product single-handedly- and proudly- shows several slices of the gaming community demographics we don’t usually see.

This is 500 years after humans already established a galactic civilization - however long that took. After that much time, old one-planet nation-state stuff like 'China', 'America', 'Russia' are just distant memories you might find footnoted in a history disc.


You mean they are uploads living in a computer simulation? The word apotheosis was used in the television series Caprica, and that is what it meant in that show. So are Orun, AIs?

Thomas Bowman said:
You mean they are uploads living in a computer simulation? The word apotheosis was used in the television series Caprica, and that is what it meant in that show. So are Orun, AIs?
Click to expand...


My reading says there was an apotheosis- some beings were evolved beyond mere physicality (possibly as computer sims)- but a virus (corporeal or computer, is not clear) wrecked a lot of the galaxy’s progress AND caused the loss of the secret of transcendence. The PCs are “left behind”, as it were.


Judging from what I read of the Kickstarter, that’s not even in the ballpark.

Looked over the rules. Simplistic, which is good for an obviously narrative-driven focused setting/game, with your basic "stat + skill + mod vs. Target Number". The races in the game (Species I think they're called) are pretty odd to say the least. This is cool...but I couldn't relate to, well, any of them. I always like to start off as a human when first playing a new game...to help me get a bead on where all the other races fit in. I mean, it's not a deal breaker, but it is definitely not a plus.

I like the art though. Some interesting looking things (well, most anyway). I'll have to see if I can pick up a free copy somewhere (legally...like a give away, or maybe a friend will buy it for me), as I really don't support what the company stands for, overall. I was expecting to be slapped in the face with their particular..."outlook on life"...all through the starter PDF, but I was pleasantly surprised that I wasn't! This Starter PDF has at least managed to get me back to a "well, I guess I'll have to take a look after all" side of things in stead of the just outright "nope...no sir...not gonna do it" stance.

I'll keep playing Shatterzone and Star Frontiers for sure, but cannibalizing another sci-fi game for ideas for bad guys, tech, creatures, etc is always a good thing!

Staff member
Personally, I’m more prone to buy a game with a good setting and bad mechanics than the other way around.

pming said:
I really don't support what the company stands for, overall.
Click to expand...


Nope. Not that reason.

Hint: It's in their company name.

I've been searching the internet, but I can't find much about the space opera part. I've posted the following on the G+ channel for the game because I don't actually see much if any of the space opera in the preview or discussions so far.

Orun looks great and I would like more information please. Does Orun RPG have FTL travel and what is it? Does it have space combat and do all the PCs participate? Can the PCs customize ships? Is there a star chart with planets and travel time? Are there a lot of pre-gen NPCs, aliens, ships, and planet adventuring locations to help the GM make adventures? Thanks.