Palace of the Vampire Queen Returns 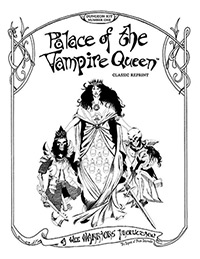 Palace of the Vampire Queen was the world's first known commercially-published adventure. Originally released in 1976 by Wee Warriors™, it is a 5-level dungeon with what was called pre-factored creatures and treasures (in other words, this is essentially a stocked dungeon). Designed for 0E / OSR.

This piece of gaming history from Wee Warriors™ is a must for collectors and old school gamers. With the original on the extremely rare list, this classic reprint has been remastered for a clean print, and is readily available at a low cost.

Available in PDF and Print formats from Precis Intermedia

Available in PDF format via DriveThruRPG

Wee Warriors and Palace of the Vampire Queen are trademarks of Precis Intermedia.