(Paranoia) A Black Hole is Released in Alpha Complex

Publisher
R&D has created a black hole inside Alpha Complex. Your Troubleshooters have been brought in to sort it out. What could possibly go wrong?

Alongside the Project Infinite Hole box set, there is now a veritable fleet of new Paranoia expansions that put the mad scientists of R&D front and centre into your missions. 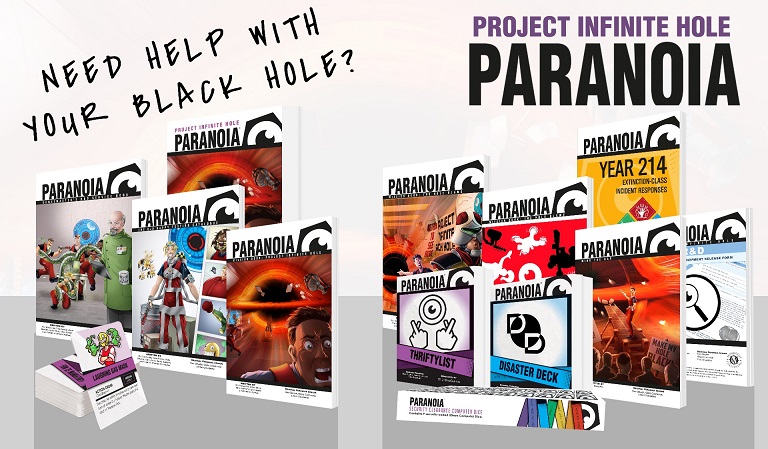 Extinction-Class Incident Responses
People who are not Infrared clearance know that R&D experiments can go pear-shaped at any time. That is tolerable for two reasons: Important citizens live outside of the blast zone and sometimes R&D makes important discoveries through failure. But there are times when an R&D experiment goes less pear-shaped and more mushroom-cloud-shaped.

These are classified as extinction-class events because, to put it so a Troubleshooter can understand, they can literally destroy all of Alpha Complex, its citizens and maybe even Fried Computer! (Or to put it so an Infrared drone can understand, bad thing make stuff go bye bye.) At least so far, these events have been prevented thanks to the hard work and casual attitude towards casualties from service groups...


The Hole Blame
Troubleshooters! Citizens in TRK Sector report that many small items have mysteriously disappeared. This is clearly the work of that notorious thief the Small Item Bandit! (Name pending approval by the Ad-hoc Workshop for Marketable Traitor Nicknames.) That is why you have to go there, arrest the Small Item Bandit and recover what they stole. And yes, we are absolutely, 100% sure the missing items never got sucked past the event horizon of the black hole sitting right over there. On a related note, there is no black hole right over there. Understood, citizen?


Mind the Gap
Why hide the existence of a black hole when you can convince everyone that it is amazing and useful (but without ever stating exactly why)? Yes, the now-famous TRK Sector black hole is perfectly safe. It is even growing bigger all the time while being really helpful with… uh, that is… well, The Computer said any negative news about it is fake, so it must be lovely! Come visit and buy some black hole merchandise, attend a pro-black hole pep rally and maybe – just maybe! – you can catch a glimpse of the singularity! (Actually, the thing has destroyed most of the sector so it is kinda easy to see.)


Thriftylist: Refurbished Stuff
Finally, you can purchase or be volunteered to test used experimental devices with Thriftylist! This marketplace has everything Troubleshooters both want and fear: armour, Coretech apps, surveillance devices, weapons and miscellaneous stuff. Yes, stuff. All these items were handpicked from the previous Paranoia edition’s great equipment books, STUFF and STUFF 2! And they have all been updated to this edition.


Thriftylist Deck
Wait, you want a warranty for these refurbished devices? That’s cute.

Thriftylist brings back some of the weirdest, deadliest and most off-putting devices from the old STUFF and STUFF 2 books as ‘refurbished’ items. And now you have the Equipment cards to go along with classic STUFF like the Scrubot Costume, Chainsaw Gun and Eyeshutters .

Well, you have them if you go buy this. Hint.


The Disaster Deck
There are no disasters in a utopia like Alpha Complex, just happy little accidents that cause sector-wide evacuations. And with this Disaster Deck, players and GMs alike can use cards to create genuine happy accidents. Each card includes an instant effect and one that keeps happening each turn until the Disaster card is discarded. Plus, these look like normal Action cards on the back! You can have disasters queued up while everyone thinks you are just plotting against your team – when you are really plotting against EVERYONE! MWA HA HA HA!


R&D Experimental Equipment Release Form Pack
This is a handy pad of tearaway forms specially designed to get your Troubleshooters into the maximum amount of trouble whenever they 'accept' items to test from R&D. Double their problems immediately by holding them to account with their own words! Contains 50 forms, ready for play.

(Paranoia) March of the Infrareds