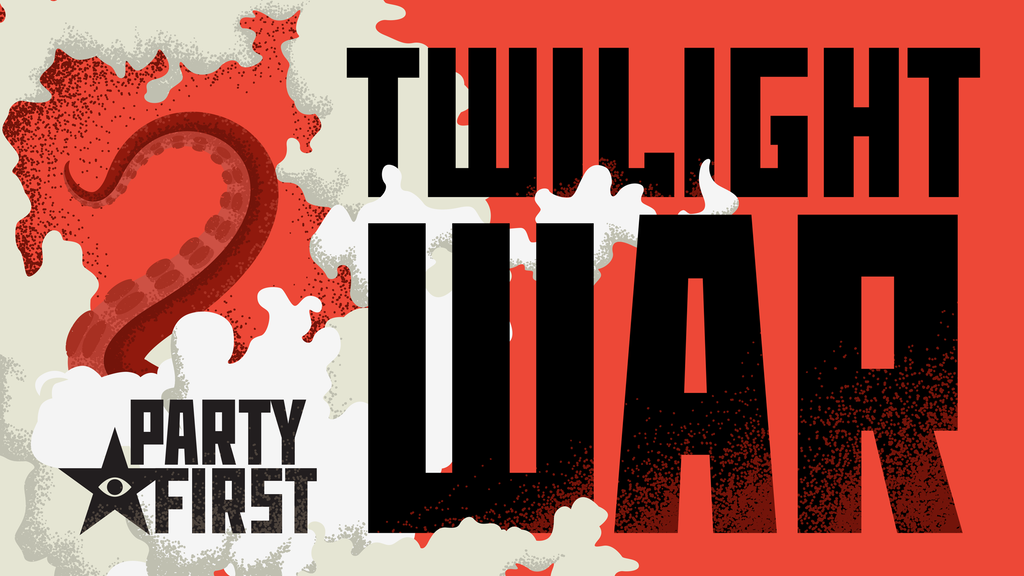 PARTY FIRST: TWILIGHT WAR IS LIVE ON KICKSTARTER
​
Be forewarned: there are few happy endings in Party First.

The sun sets slowly on the horizon as fingers of ruddy light compete to turn the sky various shades of red. Dimly, it illuminates the world that you know, changed and shrouded by lengthening shadows. The line between what was safe and what was not, between the real and the unreal begins to fade away, even as you watch. Such is THE TWILIGHT WORLD....

What is Party First: Twilight War?
Party First is a rules light tabletop roleplaying game for 2-7 players by Will Lentz and Brett Zeiler about the horrors of the supernatural and cosmic but also the human and bureaucratic. It takes its cues from media such as The Thing, Red Dawn, The Fly, The Hunt for Red October, and even Stranger Things but filtered through an alternate history twist.

Party First: Twilight War is a supplement book for Party First which expands on the game world with an espionage, James Bond or Jason Bourne inspired focus. Jerod Leupold and Zachary Gourley join Will to bring new classes, new ways to ratchet up tension, and two new adventures in approximately 50 pages.

Party First: Twilight War Features:
From Will
Party First started out as so many great ideas do; thinking about older films while trying to wake up in the shower. Some cross association led to ideas ways that games can attempt to bake tension in at a mechanical level and provide some of those pulse pounding break points without the game ending right there. Thankfully, Brett really helped massage my thoughts into a full-fledged game.

This world is one that I’ve always had a desire to expand on and a few smaller supplements have done so. But sometimes an idea takes hold of you and a short supplement about the divded city of Berburg soon becomes a full book of its own. The espionage genre not only lends itself well to the nostalgia aspect of our late Cold War 1980s equivalent but also hooks on mechanically to manage time and tension in some new ways. Defuse bombs in the nick of time, search fashionable parties for your contact, detain the double agent before they escape and more!

From Jerod
There are times in your life when you discover something that you will compare to everything else moving forward. A moment spun in amber that reveals something to you. The first time I encountered the Tension Engine I knew I was reading something special. Something new and unique. A palpable stress inducing mechanic the further down the darkened alley way you go.

A way to play an RPG that requires everyone to work together in order to succeed. The Party either wins together or fails individually. Much like the alt history political juggernaut USRA. Not only are the players fighting monsters that the propaganda insists does not exist. They have to navigate the mechanizations of counter agents, gangsters, and much worse…politicians.

When I was given the opportunity to delve deeper into the clandestine backrooms of Party First I think I wrote 20 pages on the spot. I have never believed in a project so effortlessly. My childhood was fueled by movies like The Thing, Remo Williams: The First Adventure, and Dreamscape all seen through neon colored shades.

These were the stylistic touchstones of my youth. And I hope this book can be your touchstone to the Tension Engine. I want everyone to have their before and after moment defined with this sourcebook wrapped in the vibrant horror setting of Party First.

From Zachary
When I first heard about Party First, I thought the notion was a lot of fun. The name was evocative of the setting right away, and I’m a sucker for this brand of “our world but not.” I love the hints of there being Something Weird just around every corner. Will had made a lean system that lends itself well to being picked up and played easily.

It’s also a blast to write for.

The opportunity to help Will flesh out more of the details of the world of Party First has been a highlight for me. This game is a labor of love, and I think it shows in the details, and in the ways it entices you to dig into it a little deeper. Just.. not too deep. You might find something staring back at you.

From Matt
Horror, intrigue, and crippling bureaucracy. This was a brand new combination to me and that’s a big part of why it has been so fun to contribute to the production of Party First and Twilight War. Will has created a world that is recognizable and unique while providing a wide-open canvas for improvisation, visuals, and creativity. Given its strong foundation, I’m excited to see the Party First world expand with Twilight War and I look forward to seeing what’s next!

What People Are Saying
“The combination of eldritch horror and the Cold War is a match made in heaven, and telling that story from the Soviet side ratchets up the tension and paranoia even more. This is very rich ground in which to tell stories.” – Mike Curry, System Design 7th Sea Second Edition

“Gamenomicon consistently fuses rich thematic settings with direct & beautiful presentation & play. Their games slide me sideways into a parallel world. So I have to ask myself, ‘Am I ready for the Twilight War?’” – Tony Vasinda, Plus One Exp.

“…the rules are easy to pick up,[and] provide a dynamic resource mechanism that injects decisions into the dice rolls beyond “do I succeed or not.” – Patrick Kanouse, BlackGate.com

And last night we achieved our goal!

Now lets hit some of those awesome stretch goals!