What path will you walk?
Step into the dark with Path of Shadows, the first Pathfinder Roleplaying Game supplement by Ascension Games! Inside you'll find several shadows- and darkness-based options for your favorite base and core classes, along with a brand-new shadow-based class, the nightblade!

Path of Shadows has several features, including:
*The nightblade, a new 20-level base class that focuses on shadow and darkness magic. Choose from several specializations to cater the class to your likings, such as the deceptive Twilight Veil or the destructive Ravaging Void.
*Variants and options for a dozen existing Pathfinder Roleplaying Game classes, such as the new Darkness mystery for oracles, the stygian striker magus, or the monk of the eclipsing moon.
Twenty-five new feats for characters of all stripes such as Terrifying Ambush and Lingering Shadows, including new racial feats for Fetchlings and Wayangs, the playable races that hail from the Plane of Shadow.
*Nearly seventy new spells for almost every spell caster, from the lowly grasp of darkness and shadow necromancy to the terrifyingly powerful maw of the nightwave and entropic storm.
*Several new magic items and weapon and armor properties, such as the necrotic weapon property or the mighty twilight reaver. 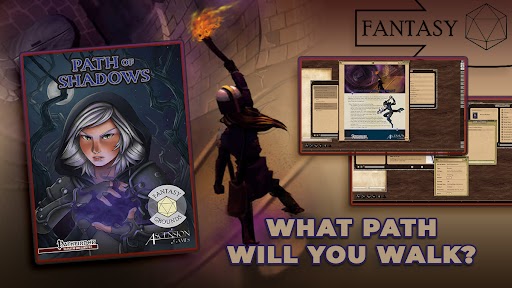 Five Things I Love About Shadow Of The Demon Lord
2

News Digest for the Week of June 4