If you're like me, you probably thought that Fantasy Grounds and d20 Pro (both virtual tabletops) already had official Pathfinder content. Fantasy Grounds already has official D&D content, and other games. Apparently that was not the case, as Paizo has just announced that Pathfinder is now on both. Roll20, probably the world's largest VTT, is notably absent, but perhaps that's coming? "Paizo Inc., publisher of the award-winning Pathfinder Roleplaying Game and Pathfinder Adventure Card Game, announces today agreements with Mesa Mundi Inc. and SmiteWorks to deliver official Pathfinder RPG content to millions of gamers through their leading virtual tabletops, D20PRO and Fantasy Grounds, respectively." Anyhow, here's the full announcement. 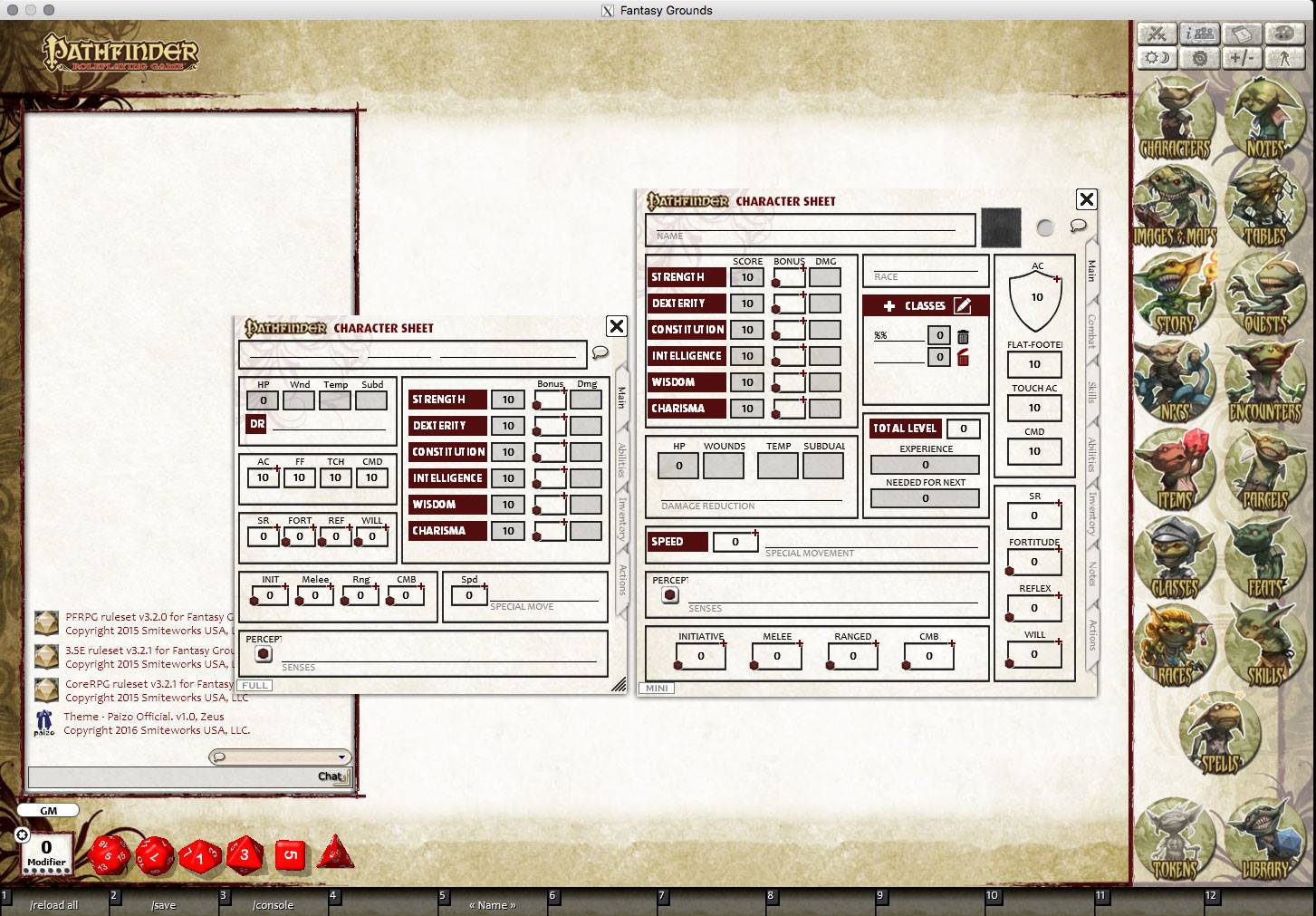 "I am a long time fan of the Pathfinder Roleplaying Game and I am excited to begin working with Paizo to release official content," says SmiteWorks' president Doug Davison. "We believe that Fantasy Grounds already does a great job supporting the game system with many tools to help automate the game, share maps, track combat and speed up DM prep both at the table and online. I am ecstatic that we can now share the great adventure paths, with modules soon and monthly releases next year."

Says Tobias Drewry, CEO of Mesa Mundi, Inc., "Adding officially licensed Pathfinder material to D20PRO tops many of our users' wish lists. D20PRO already offers deep support for the Pathfinder system, including automated combat and effects, skills, spells, movement and more. We are thrilled to level this up with the addition of Paizo's rich library of official content."

"We had a big announcement for my game company (SmiteWorks) today. Pathfinder is one of the remaining large RPG gaming properties that we still had left to secure and we just signed a license agreement with them that was years in the making. I began working on this deal in 2009 when I first bought SmiteWorks and the persistence has finally paid off.

While it makes great news for our business, on a personal level, this gives me a chance to work on yet another brand and property that I greatly admire and for a game that I've played many, many times. I feel truly blessed for the opportunity to work with the fine folks at Wizards of the Coast for Dungeons & Dragons, Pinnacle Entertainment Games for Savage Worlds, Chaosium, Green Ronin, AAW Games, Troll Lord Games, numerous smaller independent companies and artists and now Paizo for their Pathfinder Roleplaying Game.

Fantasy Grounds is also working on a WOIN ruleset for its VTT.
SaveSave​
Click to expand...

Morrus is the owner of EN World and EN Publishing, creator of the ENnies, creator of the What's OLD is NEW (WOIN), Simply6, and Awfully Cheerful Engine game systems, and co-host of the weekly Morrus' Unofficial Tabletop RPG Talk podcast. He has been a game publisher and RPG community administrator for over 20 years, and has been reporting on D&D news for two decades. He also is on a Twitter.
U

Very cool. Glad for them, while there is a bit of anti Roll20 stuff floating around on the smiteworks forums from time to time I do like the community and developers in general.

As someone who has spent 6 months with fantasy grounds 5e and has spent 3 years on roll20 (various systems, started with pathfinder)
As a DM I like fantasy grounds so much more, but due to a few niggles I would probably still recommend Roll20 to a majority of people. This will probably change after the unity version of fantasy grounds releases though.

Hopefully the Pathfinder Beginner Box is added to Fantasy Grounds.

So I am guessing the VTT they were planning to produce themselves never got off the ground?

JeffB said:
So I am guessing the VTT they were planning to produce themselves never got off the ground?
Click to expand...


Wow...it's been so long since I'd heard Gamespace mentioned that I'd forgotten it was ever a thing. I guess I don't feel too bad about missing out on the closed beta now.

Not only Pathfinder, but Fantasy Grounds also released the Call of Cthulhu 7e ruleset today. Smiteworks has long been the leader in cracking open the market for officially licensed content. If you like another VTT, then you still get the benefit of the market opening up.

If they license Shadowrun, I'd be so happy.

unnatural 20 said:
If they license Shadowrun, I'd be so happy.
Click to expand...


Me too!!
But Id be doing a Triple Lindy, if someone could get a Twilight 2000 campaign going! WoooHoooo!!!!

Fantasy grounds has had a ruleset (i.e game mechanics) and OGL content for PF for years. But, Paizo has never been willing, until now, to actually license official content.

As for Roll20, their is a quote from the CEO of Paizo something like 'just be patient' or such. So, it sounds like Roll20 is coming as well.

As for Shadowrun and Twilight 2000, contact the publishers as they are no doubt the holdouts to a licensing arrangement. But, in the meantime, both can already be played on FG. As mentioned, Shadowrun 7E ruleset was just released and Twighlight2000 can be played on FG using the CoreRPG or MoreCore Rulesets.

Thank you for the info LordEntrails

This is for 4e, but he talks about making one for 5e.

I started using fantasy grounds (FG)just before they released their Pathfinder roll playing game (PFRPG) content. I like FG but with a couple of drawbacks. I would prefer to have more of a hybrid type use of the system. I love the map making and character creation. Saving encounters and plot lines. Even having verbal components you can change into any language and descriptions of each area you can edit are all bonuses. But I enjoy having my guys push lead across paper and move mini's on my table. The fog of war system isn't good unless you have two computer screens going. I can work within the means of the system and will develop a gaming table with a built in screen to link with a computer that has another version of the FG on it but this is a lot of money and a second account/ computer and table build to make it work.

If anyone knows a easier way of achieving the same results without investing as much time or effort please let me know.

You can run an additional instance on the GM machine and use localhost as the ip address to through onto a screen or projector. No need for a second machine.

Also this is a relatively cheap build using a projector.

Pathfinder 2E [Legendary Games] The Medium is here for PF2sday and a PF1/PF2 Kickstarter coming in June!