Hello my lovelies and welcome to another PAIZO PRODUCT REVIEW! This edition is somewhat-rare double-header: we’re taking a look at Pathfinder Lost Omens: Grand Bazaar and Pathfinder Lost Omens: Monsters of Myth. Both of these tomes were a little too one-note to fill up a full review, but by gum do they punch above their page count when it comes to tasty new content, and I am pleased that I can do them justice by putting them together. With that, on with the show! 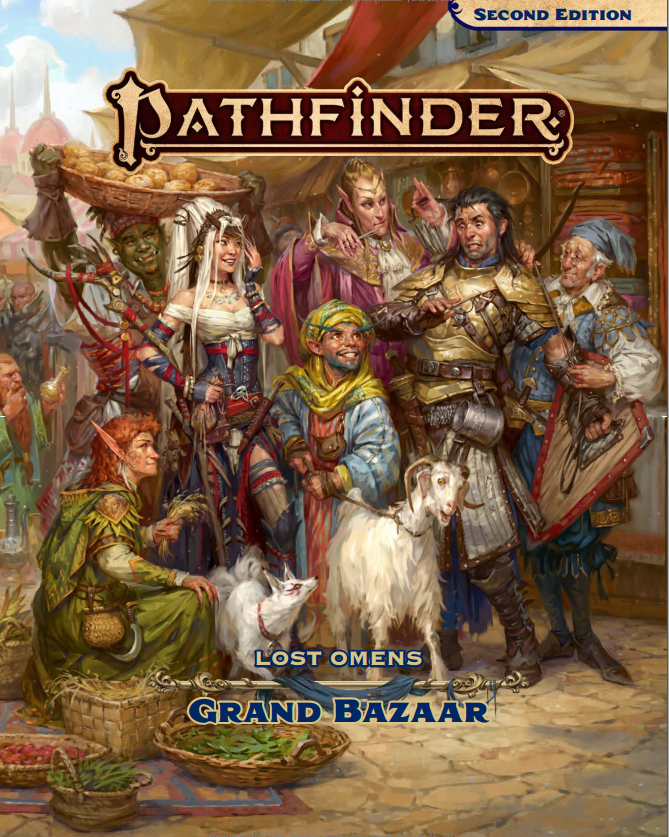 We’ll kick things off with Pathfinder Lost Omens: Grand Bazaar. Right off the bat we’re going to shout out the excellent Ekaterina Burmak for the delightful cover art – it’s a riot of color, expression, and character that ties in so many of Pathfinder’s iconic looks and people as well as introducing the viewer to a number of the new delights to be found inside. The delights don’t stop when you crack open to the introduction, either – I’m always a fan of a cheeky, in-universe introduction, and the “audio tour” of the Grand Bazaar by its Overseer, Bwutuzu the Panther, fits squarely in that category.

AND THEN, the next page-turn opens into a huge, edge-to-edge double-page spread lovingly illustrating the Grand Bazaar! Not in its entirety, of course – I imagine the Bazaar can be as compact or as extensive as it needs to be in your campaign. Still, going edge-to-edge like this illustration does sets any GM’s mind aflame with possibilities, and the space between the noted shops allows GMs plenty of space to fill in with their own creations. 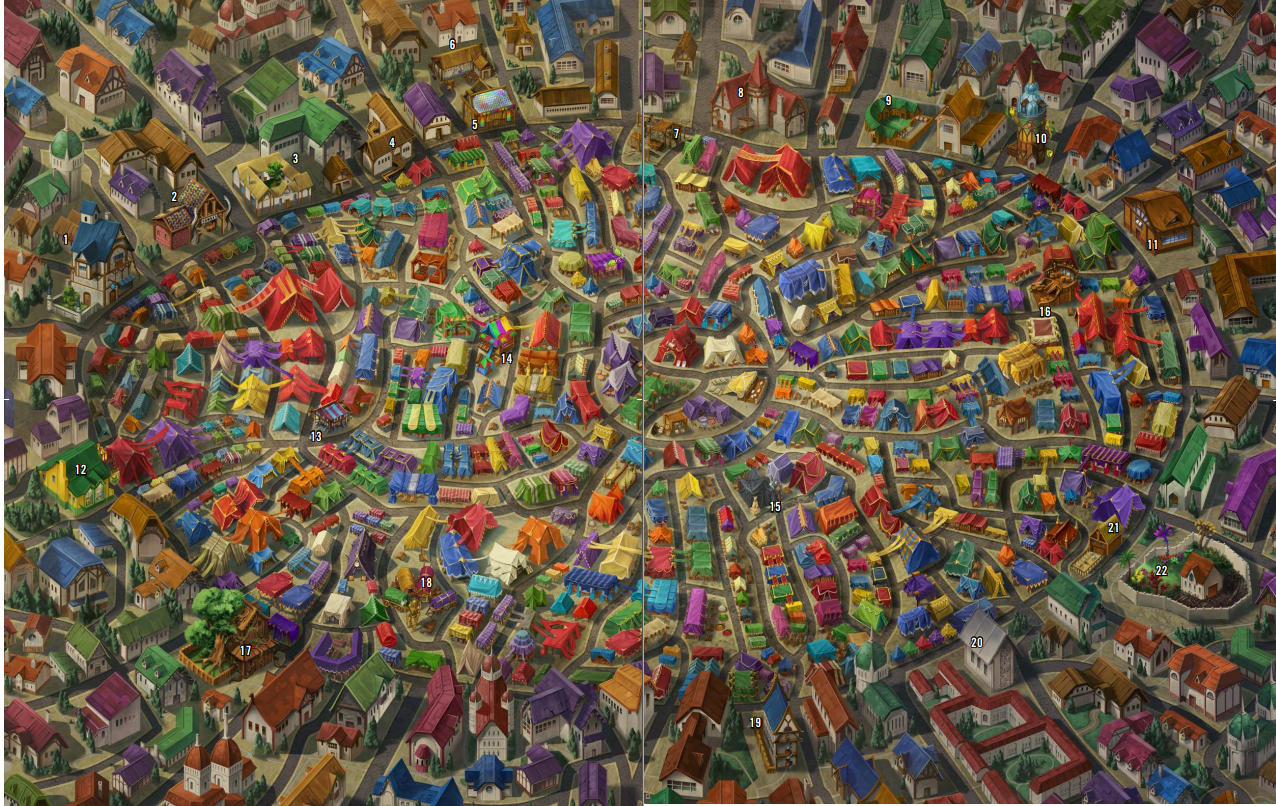 The meat and potatoes of Grand Bazaar is the twenty-two prominent shops, storefronts, and vendors noted on the map, as well as the general vibe of their specialized wares. This setup has the flexibility of allowing GMs who enjoy roleplaying and shopping episodes the variety and opportunity to explore those spaces, as well as giving GMs who are less strong in those areas a few crutches to lean on. In addition, each entry comes with a juicy amount of history and characterization for each shopkeeper and shop, and the devs have made sure to include a handful of adventure hooks sprinkled throughout each entry.

Couple detail show to the primary shops with the variety provided by the vignettes on all the “back-alley” shops, and a healthy dose of character options, and you have an excellent addition to any Pathfinder 2E library. 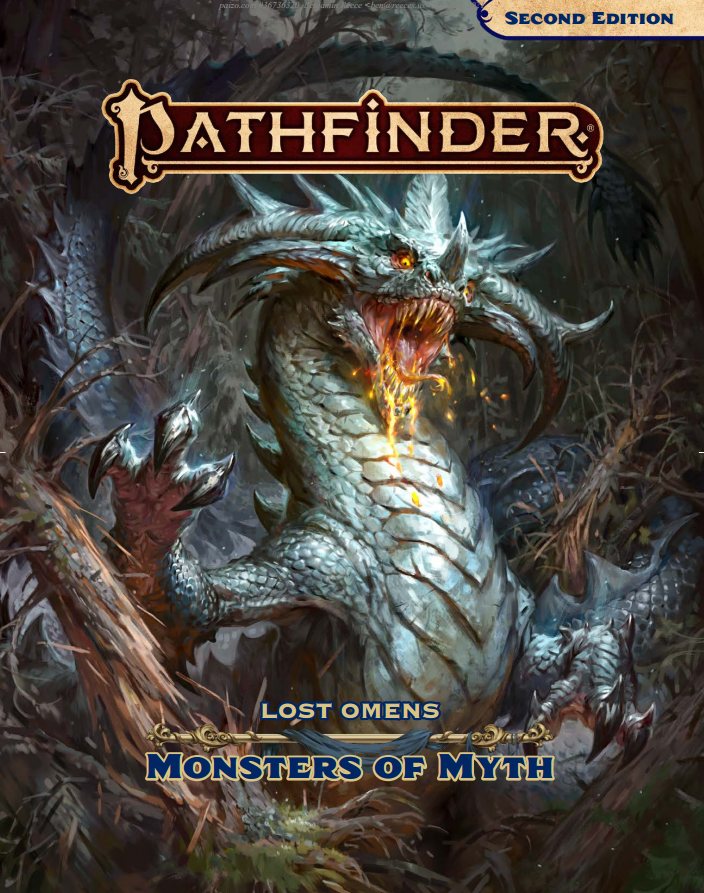 On to Pathfinder Lost Omens: Monsters of Myth! And oh, goodness, if I was a fan of the flavor and potential of Grand Bazaar, Monsters of Myth is a double, triple, and quadruple scoop of that flavor and potential. There are twenty entries detailing – well, monsters, to be sure, but in truth this book is more focused on the legends that build up around these unique monsters, and how they impact the landscapes and communities around them. And the art! Oh, the art! Easily half of the entries are headed by art that is stylized to evoke the real-world cultures that provide the inspiration for these monsters – honestly, this book is worth the purchase just for the header art.

Not only do the legends preceding each stat block come in a variety of styles and voices (which, in my opinion, chef’s kiss), not only do they provide plenty of easy access points for plot hooks and ways to integrate each mythical monster into a session or campaign, there’s also a dedicated section in each entry describing how to use each monster in a low, middle, and high-level campaign! There’s also variants for making a monster stronger, as well as occasionally lesser versions of each monster in case your GM needs a few pointers for folding in a monster or just can’t shake their desire to fold in a six-eyed sun-maned Nemean lion to their campaign. 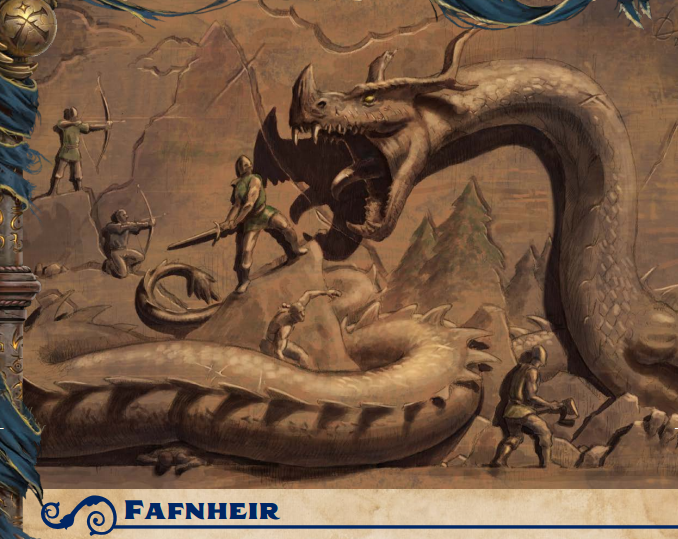 And, of course, not every Monster of Myth is a titanic, world-ending foe – indeed, cheekily, the developers have included a handful which are scaled for challenges in very low levels, even as low as level one or two! Don’t worry, though; there’s still plenty of big powerful baddies, including kaiju (KAIJU!!) which are so big that they don’t even get stat blocks, only the environmental effects and hazards caused by the wake of their destructive passage and conflicts.

In short, then, Monsters of Myth slaps and is a rock-hard must-buy. I can’t like a game supplement more.

That’s it for these two delightful underdogs! See y’all next time.

The Grand Bazaar book ties in perfectly with the Absalom book giving you a ton of content on the city at the center of Golarion. Enjoying reading both of them

Monsters of Myth is one of those cool resources for GMs who are wanting to spice up a campaign with a legendary monster. Even if you don't use these legendary monsters, the book is giving you the ideas for building your own.

I'll comment that both of these books are worth it even if you don't use Golarion as a setting; the setting material can still be inspirational, but both books hold a lot of utility. The only downside to the Grand Bazaar is in its organization (which scatters goods and gear throughout the book by what shop sells which thing). But both are great purchases for homebrew campaigns craving useful content.

The Grand Bazaar cover illustration makes it look like Valeros is about to be forced to do something dodgy with the goat!

Deathmaster Banak said:
The Grand Bazaar cover illustration makes it look like Valeros is about to be forced to do something dodgy with the goat!
Click to expand...


The iconic witch's face looks far too benevolent - almost doll-like. Something about the aesthetics of 2e is just very unappealing to me. Brown-ish colour schemes for the books and consistently awkward, garish art imo.

Deathmaster Banak said:
The Grand Bazaar cover illustration makes it look like Valeros is about to be forced to do something dodgy with the goat!
Click to expand...

As a GM and a Golarion aficionado those books are phenomenal.

The Monsters of Myth book sounds really interesting. I'm not playing PF2, nor am have I been very impressed with PF2 monster design; however, this book sounds right up my alley.

I was skimming the Monsters of Myth book the other day and became very frustrated. Most of the entries don't give you an explanation of what the creature is until four pages in.

Why, why, why would you format a book like this? It makes me crazy. Each entry should start with a paragraph explaining what the creature is. Otherwise, there's no context for all the other stuff that comes before it in the entry.