When it came to adding a meat-substitute to the menu in the form of "Surrogate Steaks," Heroes' Feast decided the only way it could be justified in a fantasy setting is for it to come from outer space. 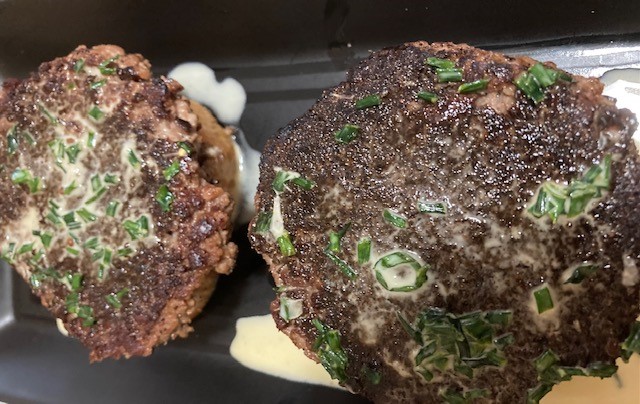 We've tried Impossible Burgers and Beyond Burgers before, so when we realized that there was a recipe with a meat-substitute as an ingredient, we couldn't pass it up. But before we get into the recipe itself, it's worth discussing the point of meat-substitutes vs. a plant-based product that doesn't try to taste like meat.

The whole point of these meat-substitutes is just that, they're substitutes for meat. Therefore, their flavor and texture should be similar to meat. Of the two, I feel Impossible Burgers are closer to that ideal; Beyond Burgers still taste more like a plant than meat to me. But when you're using the meat as a hamburger, it's mixed with many other flavors (lettuce, tomato, ketchup, mayo, etc.). The meat matters to a certain degree, but as it's not a steak, the patty takes a back seat to the rest of the meal. I state all this because in theory, a meat-substitute can be treated just like meat in a recipe. Heroes' Feast disagrees.

We discussed previously how there are subtle and overt references to certain groups of elves not eating meat, despite the fact that they use a bow (and presumably, not just for warfare). Elven magic could have just as easily created a meat-substitute. But in this book, the elves got a little help. The meatless patties came from outer space. The Expedition to the Barrier Peaks to be precise. 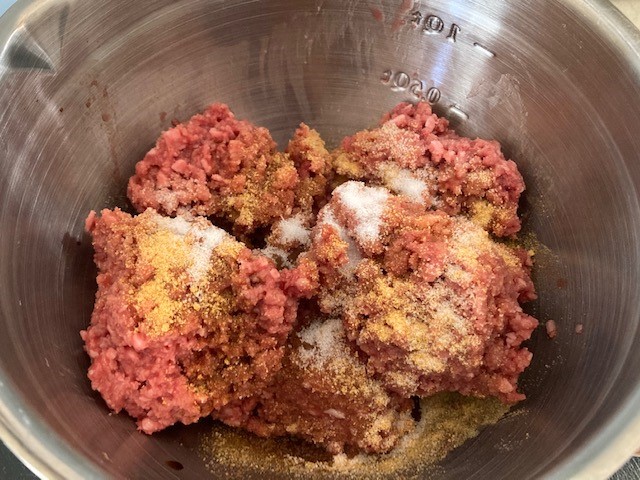 The multiverse is a stranger place than many dare imagine. In a bizarre ruin near the Barrier Peaks of Oerth, otherworldly humanoids had stocked their pantries with all manner of sustenance sealed within clear airtight pouches. When the sole survivor of an expedition to that cursed place returned to Greyhawk, she claimed to have made the journey home eating the curious meat she found there. After much puzzling by local alchemists over the remaining stock she carried, they determined it was not a meat at all but a curious vegetable compound seasoned to deliver the essence of meat. Inspired by this discovery, some bold chefs began experimenting with their own approaches to this “surrogate steak,” a process eventually perfected by high elves relying on soy, barley, and cocoa butter.
Click to expand...


In short, in a world of fantasy and magic, aliens are the source of the meat substitute. And yet there is no reference to this type of food in the original adventure. There are references to food dispensers in kitchens:

Each kitchen will have some bare counter space and a number of unused trays about. Along one wall is a bench with a number of metal boxes resting on it. Each box has a dark-colored glass door in the front of it and arranged beside these are a number of square metal plates (selector buttons). On top of each box is a short, black cylinder (temperature control knob). Inside each box are a number of shelves spaced close together. Along other walls are a fine metal mesh (microphone/speaker grille) with a rivet (call button) below it. Next to these is a long, narrow door that opens to a small shelf-like compartment. Near the entrance is a dark glass plate with four rivets below it. (This was the daily menu screen. The rivets were control buttons for it. The menu screen no longer works,) If food is dispensed, it will be sewed in a compartmented tray of a horn-like material (plastic). There is a 20% chance that each machine that is tried will serve. There are eight per kitchen, and not less than two will function, but one of the functioning machines has a 50% chance of dispensing poisonous food.
Click to expand...


Ironically, the fiercest defenders of these food dispensing machines are vegepygmies. Given that this food is plant-based, does that make them cannibals?
The other food dispensing encounter is my personal favorite, the Pushy Dining Servo Robot:

It will immediately attempt to seat any persons entering the dimly lit lounge area, and then begin serving them heaping dishes of "food". The substance in the dishes will be a decaying mush covered with nauseous blue-green mold. If any creature so much as tastes a drop of it, it will cause insanity the next round as the blue-green spores attack the brain. Insanity lasts for 1-4 turns, and the person then dies. The effects are curable with either neutralize poison or a disease curative solution or spell. Purify food and drink will have no effect. If the party refuses to eat, the servo will attempt to force feed the closest person, pursuing the party if they attempt to flee, although the servo will not leave the level, The servo robot: AC 3, MV 15", HD 6, hp 36, #AT 2 (grapples with 18/50 strength) while 2 tentacles shove "food" into the person's face.
Click to expand...


To sum up, the two major sources of food that Heroes' Feast uses as meatless inspiration is poisonous 50% of the time and protected by plants or is covered in mold and force-fed by a handsy robot. Someone doesn't like meat-substitutes, and it shows in the recipe itself. 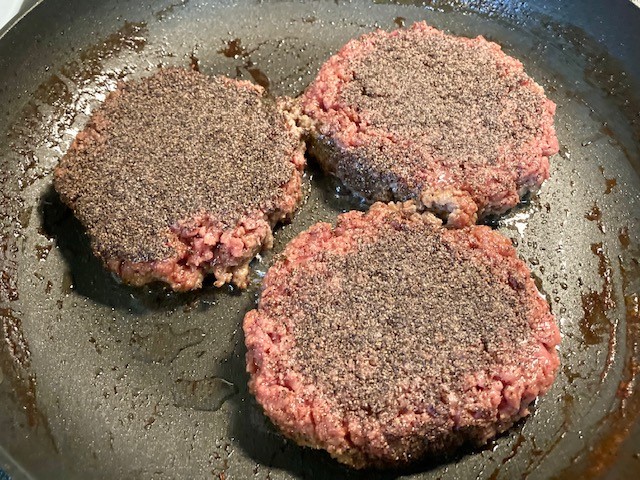 I Heard You Like Pepper, so Here's Some Pepper with Your Pepper​

There's already a "burger" recipe in Heroes' Feast that's called a "tavern steak." To make it seem less like a burger, the recipe places it on half a bun and covers it with sauce. It was surprisingly delicious.

This meat-substitute is largely the same, with a white sauce that's quite tasty. But in making the patties, it calls for something that can only be described as "cover the taste of the meatless patty":

Spread the pepper in a wide, shallow dish, such as a pie plate. Dredge one side of each steak in the pepper, pressing lightly to make it adhere.
Click to expand...


That's right, you drag the patty through a bed of pepper. I love pepper, but this was too much. You couldn't taste anything else but the pepper. And that seems intentional.

Meat alternatives are always a fun opportunity for role-playing. We discussed previously how "mystery meat" can be used to good effect, but in science fiction there's a long history of using alternatives to meat that range from gross (Alien) to merely distasteful (Snowpiercer). But then, there's no reason meat-based substitutes have to be from aliens. Unless of course they're created by the energy-based beings from "They're Made Out of Meat," in which case aliens seem the most likely source.

Your Turn: Is there a meat alternative in your campaign that still tastes like meat?
Last edited: Jun 14, 2021
Click to expand...

In my homebrew, there's not really a beef substitute because there is no beef. No cows, no horses either.

In my homebrew, there's not really a beef substitute because there is no beef. No cows, no horses either.
Click to expand...

Whoa, have you built this ecosystem out? Curious if there are cow/horse replacements or does magic make up for the difference?

Kinda? It's an earthmote world, and while there are some massive miles-long earthmotes, land for grazing, for crops, is still at a premium. So beer is expensive, the drink of nobles. Most folk just drink wine or mead. Goat, fowl, and seafood tend to be the prominent meat sources. While much of the work of transport is done via airships, there'll always be a need to lug things somewhere, so most industries depend on clockwork/magitech automatons.

And again, because of the earthmote topography, there isn't really such a thing as cavalry. No one has played a paladin yet, so I haven't had to figure out what would happen there with those class features.


talien said:
Whoa, have you built this ecosystem out? Curious if there are cow/horse replacements or does magic make up for the difference?
Click to expand...

Ralif Redhammer said:
And again, because of the earthmote topography, there isn't really such a thing as cavalry. No one has played a paladin yet, so I haven't had to figure out what would happen there with those class features.
Click to expand...

Glad I'm not the only one! Significant corners of my campaign world have been fleshed out only because a player was interested in them.

I'm a big fan of only building enough of the world to have it make sense in your head and have internal consistency, then focusing on the stuff that the PCs will actually interact with and be affected by in play.


talien said:
Glad I'm not the only one! Significant corners of my campaign world have been fleshed out only because a player was interested in them.
Click to expand...

No meat substitute, my wife and I agree Impossible burger is good hot. But does not microwave well. And it was the last time I had a whopper. I hope it gets better but the price point now is a too high locally. I could get Wayu hamburger for 10 cents more per pound last Saturday.

Eis said:
I misread the title a bit and was hoping for Peppermint Patties from outer space
Click to expand...

I typoed that originally because in my head, that's what it looks like. Would have probably tasted better!

talien said:
I typoed that originally because in my head, that's what it looks like. Would have probably tasted better!
Click to expand...

depends on whether you get the candy or the Peanuts character

Eis said:
depends on whether you get the candy or the Peanuts character
Click to expand...


that goes better with fava beans and a nice Chianti.