My group has been playing through WotBS, the 4e version, and we're having a blast!
I don't have time to post reports of each session, but something my players take pictures of our set ups. So I thought I'd share them here.
You might be able to guess where we are in the campaign!

EDIT: Does anyone know how to limit the size of the image when uploading? These are a little too large I think.

To limit the size of the image you change the jpg compression and/or decrease resolution.

Staff member
That setup is awesome! Much better than my dry-erase scribblings!

I have to ask what those encounters were.

The first set up is the encounter with the ghast outside the Shrine of Anyariel, and the 2nd is the goblin king cave where Khadral is being sacrificed. We are playing the 4e version.

Been playing on and off this year, had a lot of IRL interruptions. But we are almost done with adventure 3. We're having such a blast with this campaign.

Here's some more encounters from when I remember to take pictures.

Skeletons in the cells

Underwater combat vs the biomantic skum

Combat gets hectic vs Damius

That crap is amazing.

Looking ahead, any encounters you think will be problems to make this way?

RangerWickett said:
That crap is amazing.

Looking ahead, any encounters you think will be problems to make this way?
Click to expand...


Hmmm. I've been looking at adventure 4 and getting some things prepared. I have a snow board ready with trees and most of the miniatures are ready. I think some of the one off environments are tricky, as its not worth making extra pieces for just one encounter, especially if they are optional. Mostly I'm thinking of the sewer entrance, and the wall climbing encounters, but those I'll probably just see what I can do with the pieces I have.

The encounters where the party are escaping the city could be good, but playing with buildings on the table is rarely as good as it sounds, so I might have to come up with a different solution.

I think the encounters out in the open will working really well, though I don't have any idea what to do for the ice river for the remorhaz encounter. Luckily I've still got some time until then.

The players finished up the Pyromancer's Tomb and encountered Lee on the way out!

Been a while since I posted any pics. I had some issues with my login, so had to create a new account.

But heres a bunch of chapter 4 encounters!

First up the party went to the shrieking delve to fight the green dragon and return the lyre of building:

After that they heading into Dassen on the diplomatic mission but some refugees were being attacked by a pair of remorhazs:

Near Bresk the party had their first encounter with the Talon Guard who were attacking some halfling merchants:

After bring framed for the attempted assassination of King Steppengard the party attempt to flee Bresk but are ambushed by the Talon, defeated and imprisoned:

Fleeing to the north they are pursued by Steppengards knights who eventually catch up and engage the party:

Lastly the party head into Alydi's gap to investigate the watchtower: 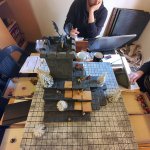 And we also finally got around to getting some custom minis for the player characters:
From left to right we have:
Nym - Shahalestian Cleric of the Solei Palancis, and Celeste's new bodyguard
Thomman - A Dasseni Paladin of Revelry
Celeste - Eladrin ranger, wielder of the living blades, defender of the seela, lost sister of Shalosha
Styro - Drow Rogue, searching for a man named Kreven who cut down his master
Eldack - Halfling Druid of the storm. From Seaquen and is trillithbound but does not know it yet.

This week the party continued their assault into the watchtower and faced down Inquisitor Crona and Commander Jass.

The large braziers on the side of the bridge across the lava to the fire tomb was a nice touch. You have a great sense of dungeon decor, lockyreid!

We've had another good month of 4e War of the Burning Sky. We are powering through Book 4.
Here's some more pics from our sessions during the Battle for Gallo's Fend

The party sneak into the enemy camp and assassinate Kelkin Thravanvost.

The real battle begins. The players have placed some defensive terrain but there are a lot of enemy soldiers and the hulking minotaur, Brakken the Blitzer.

The second wave comes crashing in. The knights hit from the flank and a couple trolls arrive to smash some 'umies.

The players have survived the battle. I'm really looking forward to the madness fight coming up. Should be chaotic.

Those are some cool mounted knight minis.

We had to move our game to an online format as NZ is in complete lockdown. But that's not going to stop us from having a great time wrapping up Chapter 4!

Here's our new isolation set up (including the party assaulting Castle Steppengard via the prison):

And the grand finale where Madness is revealed! We had an epic long combat with madness, but the party managed to contain the corruption easily and took her down with no losses.

What delightful mini did you find for Madness?

RangerWickett said:
What delightful mini did you find for Madness?
Click to expand...


Its some large nightmare ooze from the Massive Darkness board game. I had painted and used it in my 5e Out of the Abyss campaign as the demon lord Juiblex, and naturally thought it would suit madness perfectly.

The party head back to Seaquen but Vidor is in unrest as they are being harassed by a group of Trolls. The party follow the trolls tracks, and fight some in the ruins of a Taranesti village, and find the temple. But its been overrun by Yuan Ti. We ended the session with the party going inside to find a sinister ritual being performed by the yuan ti's naga overlord.

The party have headed up into the Valley of Eresh, and have started investigating the odd circumstances that are happening around town.
Here's the Ragesians, after the calm breaks, attacking the villagers.

The village of Eresh is attacked by the Ragesian army. We forgot to get a pic of the first wave of soldiers, but here's the wyvern soldiers coming in to cause all kinds of chaos. The wyverns are picking up PCs and throwing them around causing all kinds of havoc.

See you at UKGE next week?

Running session from an Ipad