D&D General Play the Solasta: Crown of the Magister Demo

For a few days only you can download the demo for the 5E-powered Solasta: Crown of the Magister video game as part of the Steam Summer Festival. 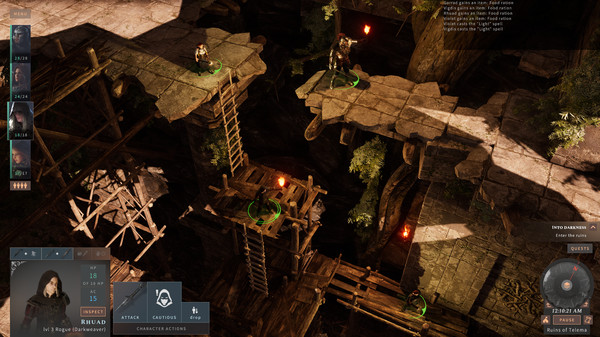 Roll for initiative, take attacks of opportunity, manage player location and the verticality of the battle field. Set yourself up for the finishing strike and possibly roll a natural 20 at that key moment of battle.

In Solasta, you take control of four heroes, each with unique skills that complement one another. Every hero expresses themselves in the adventure, making each action and dialog choice a dynamic part to the story. Players will create their heroes just as they would in a pen-and-paper game choosing their race, class, personality and rolling for their stats.

You make the choices, dice decide your destiny.

If you played the previous demo, this looks to be the same one only updated with bug fixes, new animations, upgraded character models and other assets, and some new player options like the ability to ready an action and some environmental interactions (like fire spells setting off oil).

This is exciting, and I wouldn't have known about this otherwise! Thanks @Morrus, I'll try it out on Steam later.

Abstruse said:
If you played the previous demo, this looks to be the same one only updated with bug fixes, new animations, upgraded character models and other assets, and some new player options like the ability to ready an action and some environmental interactions (like fire spells setting off oil).
Click to expand...

Thanks I remember playing the demo but didn't know the difference.

Ezequielramone said:
Thanks I remember playing the demo but didn't know the difference.
Click to expand...

If you played it back during the previous test period, give it another play. There's a good chance you've forgotten most of it by now. Or maybe that's just me...

Abstruse said:
If you played it back during the previous test period, give it another play. There's a good chance you've forgotten most of it by now. Or maybe that's just me...
Click to expand...

Thanks but my computer can't run it in a way one can enjoy the game (I'm trying to finish Icewind Dale). I get sucked too easy to games like this and have a lot to study.

I played the previous demo and had a lot of fun. Navigating the dungeon with the camera is a little clunky (though I did not play with camera settings so that might be on me). Controlling the party out of combat was not perfect, though I think it's more because 5es movement rules are hard to adapt to a video game. But the combat was exactly what I want from a 5e-based video game. Once in initiative, it felt exactly like a 5e game. If you're familiar with 5e, you will be extremely satisfied by how faithful the fights are to the system.

Considering this isn't made by a major studio, I will readily forgive any flaws (that may already be worked out since the first demo) for the sake of how faithful the game feels to the TTRPG. It's an immediate buy for me on release.

One thing to note; they're beholden to the SRD, and don't have license to the rest of the backgrounds and subclasses in the PHB. Which means they had to create their own subclasses. I couldn't find full details of those subclasses in the demo, but what I saw was satisfying.

Seemed ok, but the dialogue was atrocious. Cliché and outdated. The interface was a bit awkward, too. Kind of hard to figure out where you were able to go at times.

The combat was fun, but the camera definitely needs some work. Unfortunately the verticality of the levels that makes the combat more interesting definitely causes some camera issues at the moment. There were also a couple of occasions where the AI path-finding had some of my characters leap off high platforms that would cause damage - luckily it prompts for the feather fall reaction spell, but it would be nice if it asked if I actually wanted to hurl myself to my death!

As jgsugden said, the dialogue could be better but the voice acting was at least serviceable/fine - some of the party definitely better than others. The graphics seemed on par with something like Divinity OS 2 and they appear to have stuck as faithfully as possible to core 5e while still having it work as a video game, whereas Baldurs Gate 3 seems to be making compromises and changes. In Solasta you can ready actions, but only in response to either creatures appearing in range or entering your melee range. However, though they hint that items are magic, they make you first ritually cast detect magic to confirm, then ritually cast identify to discover their properties. This would have been nice to be rolled into one action, since it makes you sit through two "load screens".

As far as I can tell they don't use flanking, but they have cover and I think give advantage/disadvantage for notable height differences (wasn't totally sure though). A creature gives half cover, but only if you are directly and immediately behind them compared to the attacker. Everything is done in 5' squares à la XCOM though rather than something like PoE or DOS2 where movement is much more granular. Variant encumbrance is core, so careful how you distribute your loot.

It would have been better with the full license, certainly, and there are things BG3 looks like they could have learned from this game, but overall, the groan worthy dialogue, the horrible monster AI, and the confusing camera angle issues put this down on my list. If it releases before BG3, I'll play it a bit If not, I won't touch it until I'm done with BG 3.

Staff member
They're using the OGL, I believe. I love the way they put on their website "WotC has granted us a license to...."

Technically, that's true. All us OGL publishers should start saying that.

I really liked the demo a lot......but the issues with jumping/falling someplace are bad. You could literally end up someplace you can't get out of. Very annoying. The camera work is better than when the demo first came out, but 100% confused me for some time the first time I used it.

I don't care about the cliches in the dialogue, but I get that others will.

Morrus said:
They're using the OGL, I believe. I love the way they put on their website "WotC has granted us a license to...."

Technically, that's true. All us OGL publishers should start saying that.
Click to expand...

But haven't they also said they have been in direct communication with WotC?

I don't know if they plan to add more subraces, but at the moment the distribution of ability scores seems odd - half elves make better fighters than dwarves, who are pushed into clerics and rogues. And what's a dex/cha halfing for without bards, sorcerers or warlocks?

Some of the backgrounds seem a bit unbalanced too - Sellsword wizard getting free medium armour proficiency?

The biggest issue really is the camera. If they can't fix it they need to drastically reduce the verticality of the levels.

Why have everything through Steam nowadays? I would try it if I could just download them demo and play it... stupid Steam...

dnd4vr said:
Why have everything through Steam nowadays? I would try it if I could just download them demo and play it... stupid Steam...
Click to expand...

Welcome to the last decade and a half of PC gaming. Enjoy your stay.

Gladius Legis said:
Welcome to the last decade and a half of PC gaming. Enjoy your stay.
Click to expand...

D&D 5E Solasta: Crown of the Magister Gets a Dungeon Builder
2