In Ryuutama (PDF), the GM plays the Ryuujin, an NPC spirit guardian dragon, who records and sometimes interacts with a group of travelers played by the players. Together, the Ryuujin and PCs build towns and the world itself through journeys and adventures. 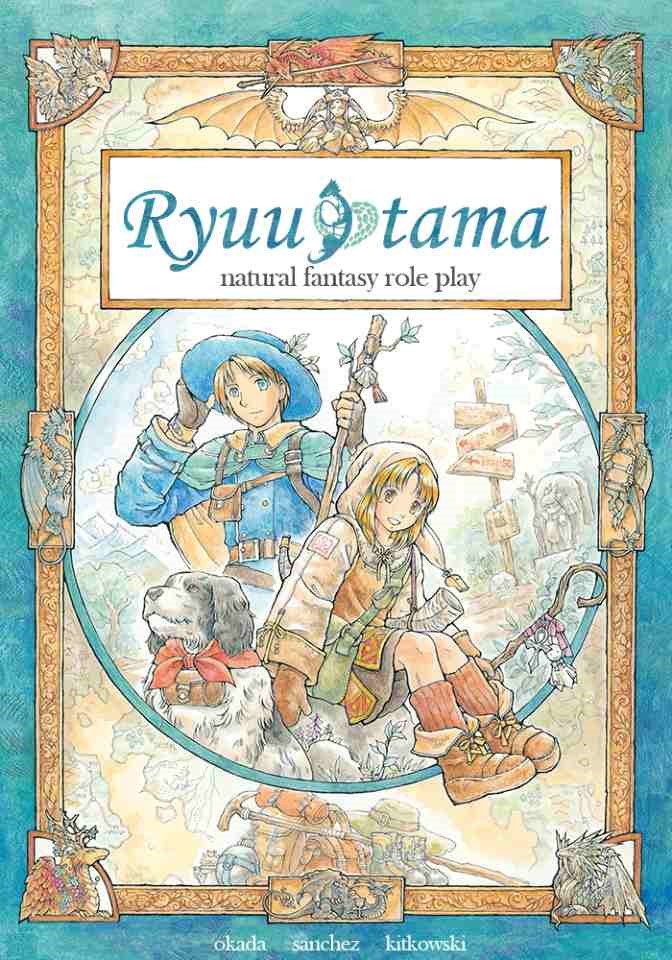 Ryuutama is a hardcover digest sized 226+ page available in print + PDF or PDF with color for layout and a bit of art but with several black and white drawings as well. I have GMed two sessions as a Midori-Ryuu, green dragon, and the experience has been novel and enjoyable. The PCs include a healer, hunter, merchant, and minstrel on a journey to circle a lake dotted with lighthouses. I share this background because Ryuutama has unique elements that are well worth exploring. For example, my dragon, Tsuro, has gained a level and can now use magic powers during the PCs journey. The players themselves are helping me build the world, working one town ahead as their characters journey onward.

This roleplaying is supported by tightly designed rules and monsters, many unique to Japanese RPGs like walking eggs and nekogoblins. Four ability scores range from a d4 to a d12 and two are rolled and added together to try to succeed at a check to accomplish something. PCs can concentrate on fighting, skills, or magic. Magic comes in incantations as well as four seasons of spells. Gear is important, helping not only in combat but also in traveling without mishap.

Four Ryuujin are options for GMs. The default green dragon concentrates on journeys. The other three cover drama and relationships, battle, and intrigue and conspiracy. Each dragon has magic they develop to both help the travelers as well as provide them with additional challenges. GMs are also provided with scenario creation guidance, sample events and adventures, town and world creation rules, and a wide range of monsters.

Ryuutama works well on Google Hangouts or other shared visual communication mediums. Combat requires only a provided one page battle sheet. I position mine on a small box in front of the camera and use the miniatures from the board game Shogun (Milton Bradley) for the PCs. The miniatures from the Tokaido Collectors Accessory Pack would also work really well. 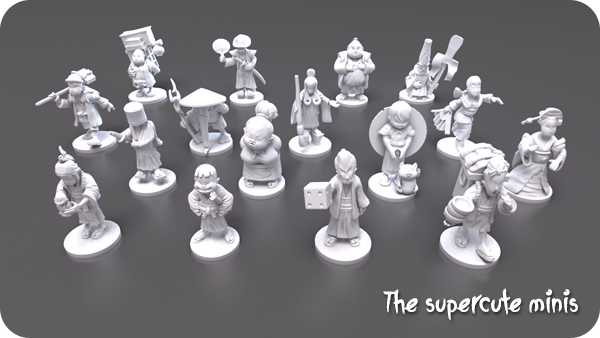 Ryuutama is all about the journey, traveling from a known town through terrain and weather, to new towns. This trek in part springs from the human cultures of the world, and the first journey is well supported by the traveler’s home town. Humans living in towns often help travelers by offering them jobs for pay as everyone remembers their first journey and how strangers helped them make money along the way.

The game overflows with pleasant experiences, boasts pleasing art and layout, and abounds with well described details. Regular folk travel roads and along the way they gather herbs, hunt, and create camp. All the dangers and possible discomfort of a long journey challenge them while monsters sometimes threaten as well. Some dragons can even become wild and serve as foes. However, the PCs’ spirit dragon watches over them and records their journey. This Ryuujin in turn feeds the story to terrain and weather dragons of the world. In this way, humans and dragons are linked in an ever cycling system of journey being affected by terrain and weather and those in turn controlled by dragons which in turn need the stories of the journey to thrive. Both setting and rules are elegant in both design and in play. 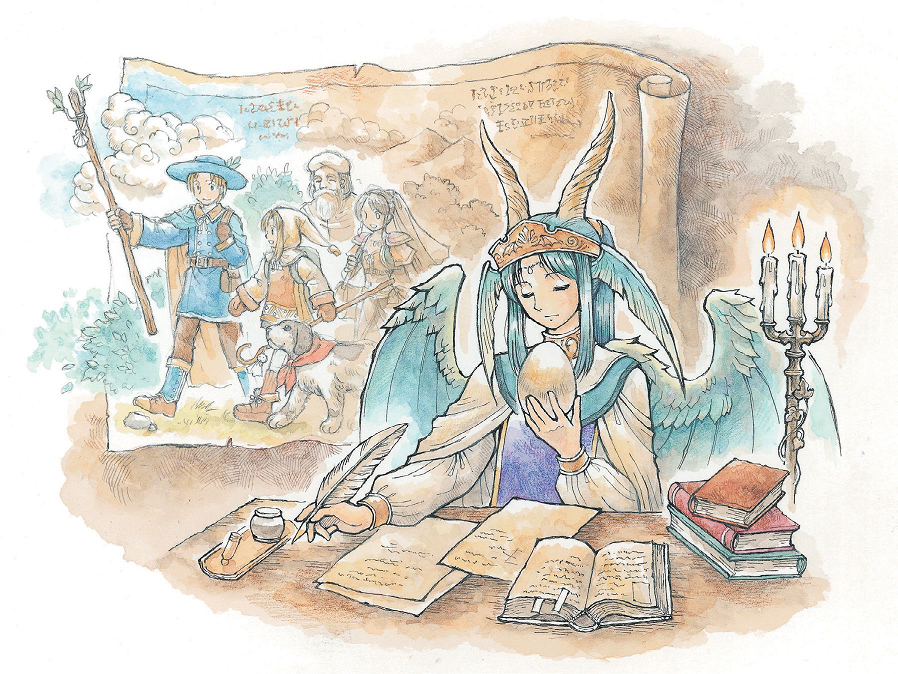 My one caveat is that while the journey itself has detailed consequences, they are abstracted to loss of hit points. Most descriptions are left to the GM. I culled travel mishaps from The One Ring, Forbidden Lands, and Mutant: Year Zero into random lists to roll on which I covered in D30 Overland Travel Mishaps. These flavorful lists greatly enhance game play and are the one thing I wish the rules had included in depth. There are examples, but random roll tables are not included.

At its heart, Ryuutama is an RPG about townsfolk exploring a largely unknown and magical world. While danger threatens, the overall tone is optimistic and whimsical. Ryuutama eschews dark fantasy for color and wonder. I think any GM and play group would benefit from exploring this setting and building a world of journeys and dragons together.
Last edited: Apr 1, 2021
Click to expand...

I really think that, if things keep going like this, the game style of Ryuutaama will be the future of D&D, happy adventurers having long walks in the nature and making friends with everyone they meet.

I had gotten a copy of Ryuutama a couple of years back, but haven't had the chance to play it yet. I appreciate the inclusion of the GM a possible actor in the party. What I appreciate most is the conbat-optional element of the system. I D&D and other RPG systems/settings but it wasn't until reading Ryuutama that I realized how hyperviolent they can be. Ryuutama is a shining example that combat doesn't have to be the cornerstone of an RPG system.

Orcslayer78 said:
I really think that, if things keep going like this, the game style of Ryuutaama will be the future of D&D, happy adventurers having long walks in the nature and making friends with everyone they meet.
Click to expand...


This is common misunderstanding of Ryuutama. Despite the lighter tone in the art, setting and magic, combat remains a big part of the system including harvesting sellable parts from monsters that are killed. Almost as much as D&D IMO. It can be quite gritty both in terms of surviving violence and being in the wild.

Skywalker said:
This is common misunderstanding of Ryuutama. Despite the lighter tone in the art, setting and magic, combat remains a big part of the system including harvesting sellable parts from monsters that are killed. Almost as much as D&D IMO. It can be quite gritty both in terms of surviving violence and being in the wild.
Click to expand...


Agreed. Combat is part of the game. However, you could easily stick to monsters being demons and undead and creatures like that if you want to avoid more personal combat. My players have yet to fight another human being. They also felt bad about having to kill a wild dragon and talked things through with the next one they met rather than fighting. Has a really different feel from D&D.

And the human/heart one might be good for less combat heavy games.

Agree, though you can also focus on non-human like foes in D&D too.

Ryuutama does have a different tone from D&D. It has more whimsy, greater focus on nature, and a lot of concepts and archetypes not found in D&D. As a result, the two games play differently.

My only point is it’s not the honobono (heartwarming) RPG that some people seem to have assumed from the art. For an RPG like that you need to look at Golden Sky Stories or something similar.

My daughters character befriended a goblin and a beserk mini-dragon and an assassin whom she turned into a hero... its the players who decide the tone of D&D

Garthanos said:
My daughters character befriended a goblin and a beserk mini-dragon and an assassin whom she turned into a hero... its the players who decide the tone of D&D
Click to expand...


Yes and no. The bulk of D&D's mechanics are geared toward combat and that action is rewarded. So, whilst individual players can roleplay however they wish, D&D itself cannot be said to have no influence in setting the tone in which it is played.

Skywalker said:
Yes and no. The bulk of D&D's mechanics are geared toward combat and that action is rewarded. So, whilst individual players can roleplay however they wish, D&D itself cannot be said to have no influence in setting the tone in which it is played.
Click to expand...

Nods, back in the day greed was rewarded by being the best way to advance a character ... Yet my players even in 70s had no interest in playing or acting like thieves and I let their characters take on them positions in the societies of their fantasy world, so sure a system can influence but I really do think story premise can over take that. I as a DM I improvised History checks and the like back then which is now less necessary these days and with things like Skill Challenges D&D got some direct mechanical "reward" for activities that didnt need at all be either violence or greed but could be seen as more generic problem solving.... one of those things 5e went retro on and no longer presents.
Last edited: Jul 9, 2020

For those that want more Grim, Grit, Heavy Metal, and Cat Gods there is now Ultraviolet Grasslands

This looks pretty cool! Thanks for bringing this game to my attention!

Undrave said:
This looks pretty cool! Thanks for bringing this game to my attention!
Click to expand...


both games are freakishly similar. This despite using different systems and approach. The overall of the game is very familiar.

Really Sad that D&D has become just a combat game

Despite Zack S I really and I mean really love A Red and Pleasant Land - Combat will get player characters instantly killed. Politics and Negotiation are key. Just enjoy the landscape and learn to play croquet.

Another very alternative adventure setting. I mean very alternative is The Gardens of Ynn
Again combat is a no win situation. Again careful exploration and manners will win the day.
Unofficial Online Garden Generator gardens of ynn generator

Gorgeous game with some great ideas. I borrowed a copy from a friend and was hooked. Thanks for giving this some exposure!